Here is the new interesting project by Italian artist Bifido in Gambettola, a small village in the north of Italy, for Bosco Urban Project. He was asked to work on the topic of labour and this is what he delivered.

Street artist Bifido spent a month in Stigliano, a small town, in a remote region of southern Italy. He was able to immerse himself totally in the reality of the people who live there, learning incredible stories.

Bifido sent us images from his work on a new project for Monart Festival in Girona, Spain. Monart festival takes place in the neighborhoods ofSanta Eugènia de Ter and Can Gibert del Pla.

We bring you Bifido’s last mural, made in collaboration with the danish artist Jacoba Niepoort. It is titled: Playground love, and created in Vienna for the Calle Libre festival. Regarding the colaborationa dn the meaning of this artwork Bifido explains to us: 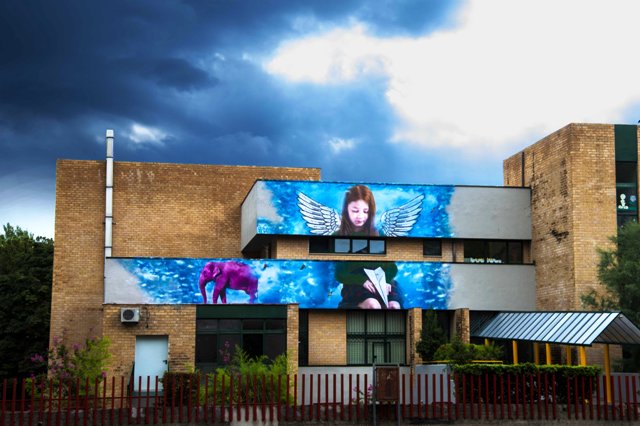 Artist Bifido just finished his last mural in Caserta (Italy), on a school. The large mural talks about the power of imagination that lives in everyone,

“I could be bounded in a nutshell, and count myself a king of infinite space, were it not that I have bad dreams.” (Hamlet) Curated by Urban Nation.

Street artist Bifido spent 5 days in Toulouse (France) were he made some fresh pieces around the city. Here we see his first piece which is called : “boys just wanna have fun” and the message it passes is one against every kind of violence.

Bifido makes a mural to comemorate the battle between Nazi fascism and the people in Rome. The uprise of locals against the totalitarian rascist occupants ended up with the death of 53 civilians just 75 years ago.

The Spanish artist Bifido presented his latest work in Italy, located on an unusual spot for this type of art. The midevil tower with a backdrop view to the sea, is the font to his inspiring artwork.