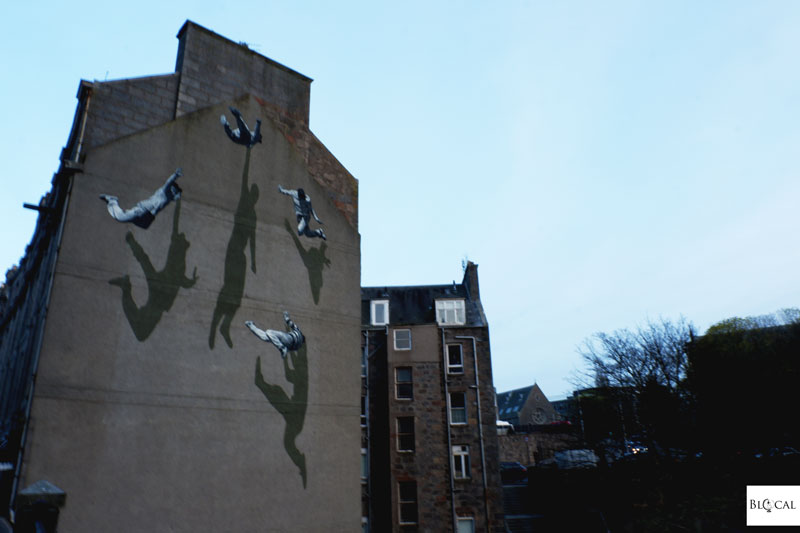 For this year’s edition, curator Martyn Reed selected a stellar line-up of 13 artists, challenging them with the theme of storytelling and its relationship to the city. Some painted a stunning, large-scale mural, some created multiple smaller, poetic interventions, and some did both –keeping up with Nuart’s excellent tradition of encouraging spontaneous street works next to eye-catching murals. 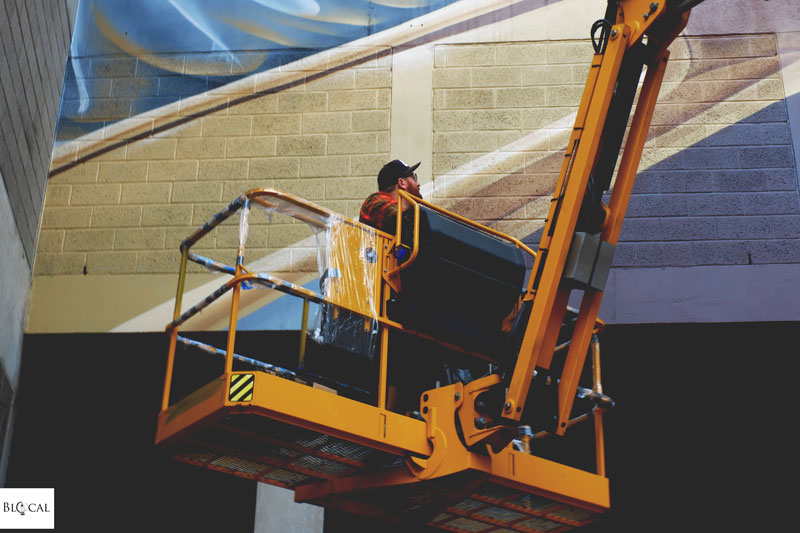 One of the most eye-catching artworks of Nuart Aberdeen 2019 is by the Australian artist Smug. He created a monumental piece towering ‘The Green’, which portrays a friend back home. 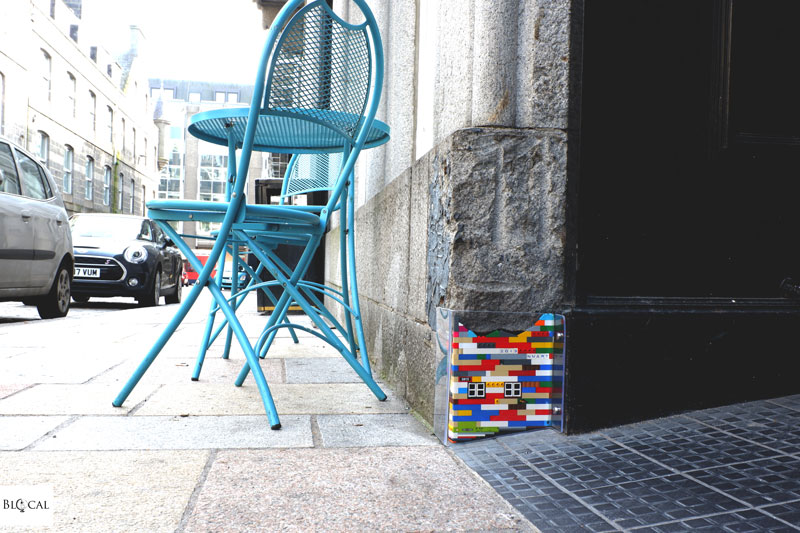 Still at ‘The Green’ –on a building that couldn’t fit more perfectly, as it happens to be a former orphanage- is Jan Vormann’s main piece made of Lego bricks. Latest addition to his on-going Dispatchwork series, it covers over patches of a historical building in the city. Additionally, with his Legos Jan Vormann ‘repaired’ also a few smaller holes hidden around Aberdeen. 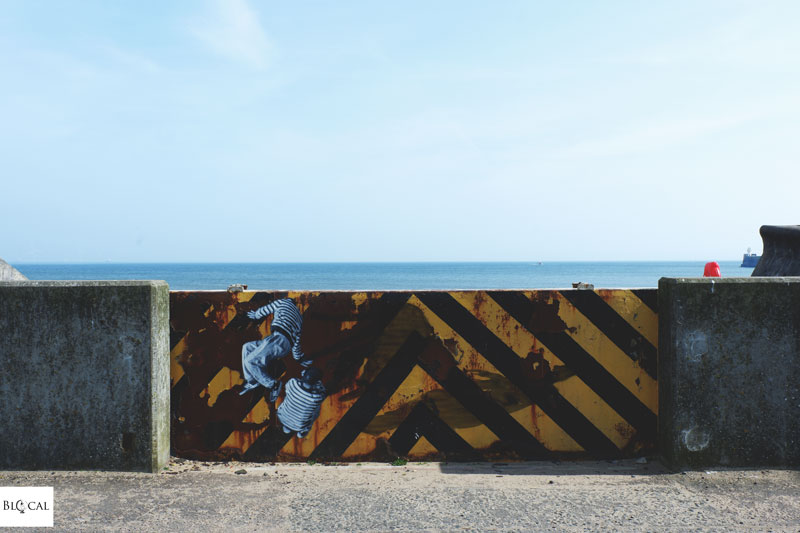 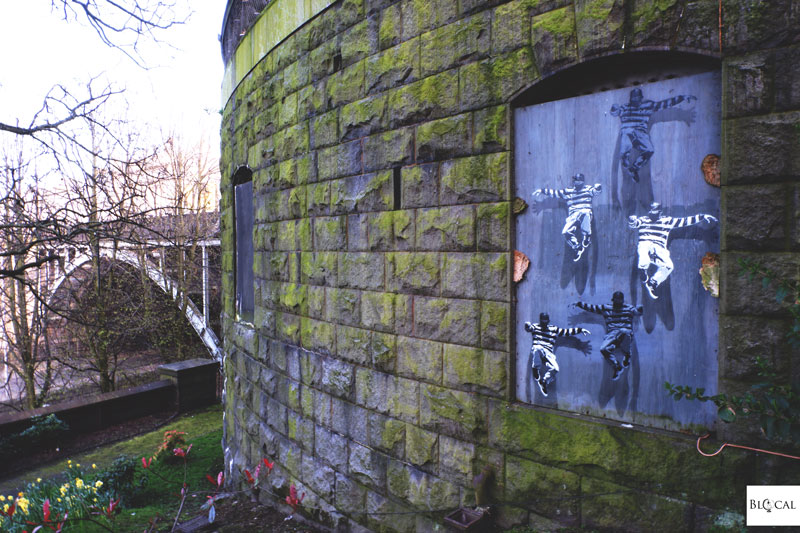 Strok’s iconic figures that defy gravity are now on a scenic facade overlooking the Union Terrace Gardens, but also on a metal window hidden in a wall covered in muss in a less glamorous corner of the same gardens and on a rusty gate by the sea. (Main photo and above) 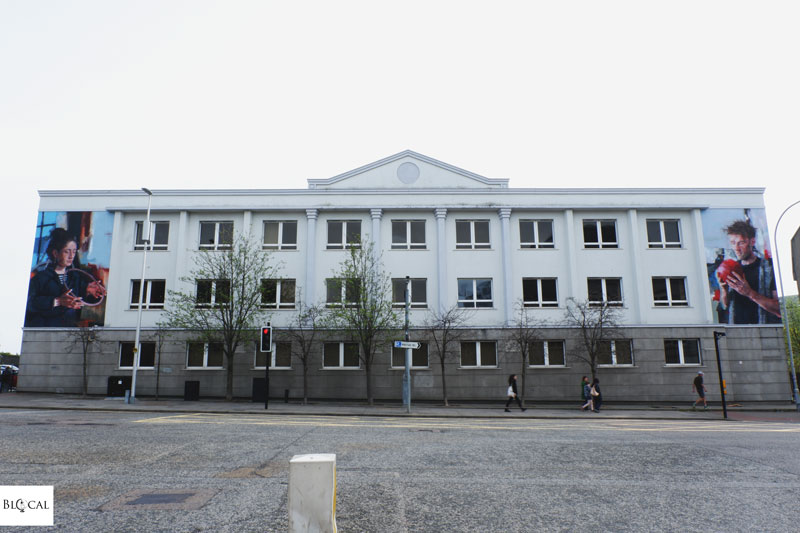 Helen Bur created a story that goes across the two sides of the facade of an empty building with a quite pompous architecture. The story travels even further with references to the artwork she painted for Nuart Stavanger, when she already explored the theme of playing. 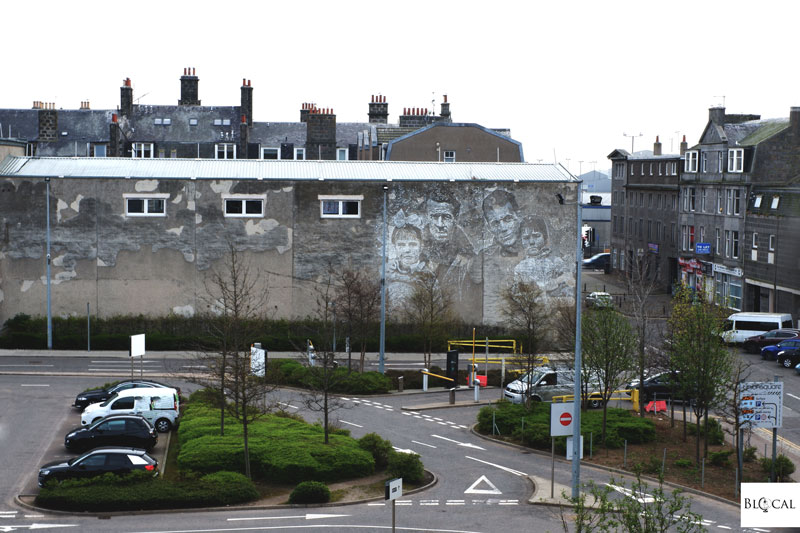 Jackhammered on the wall of a busy car park is the portrait of the first Aberdonian to go and join the International Brigade who fought the fascists during Spanish Civil War. By telling the story of Aberdeen’s solidarity, Vhils allows the past to resurface through this carved image to remind us that we are stronger when united.

Still on the concept of past is the artwork by Axel Void, made of two symmetric murals on a student accommodation. They reveal the disregarded side of a historical event –the arrival of the Queen to Aberdeen- next to the reproduction of a photo he found in the city archive depicting a girl playing hula-hoop. 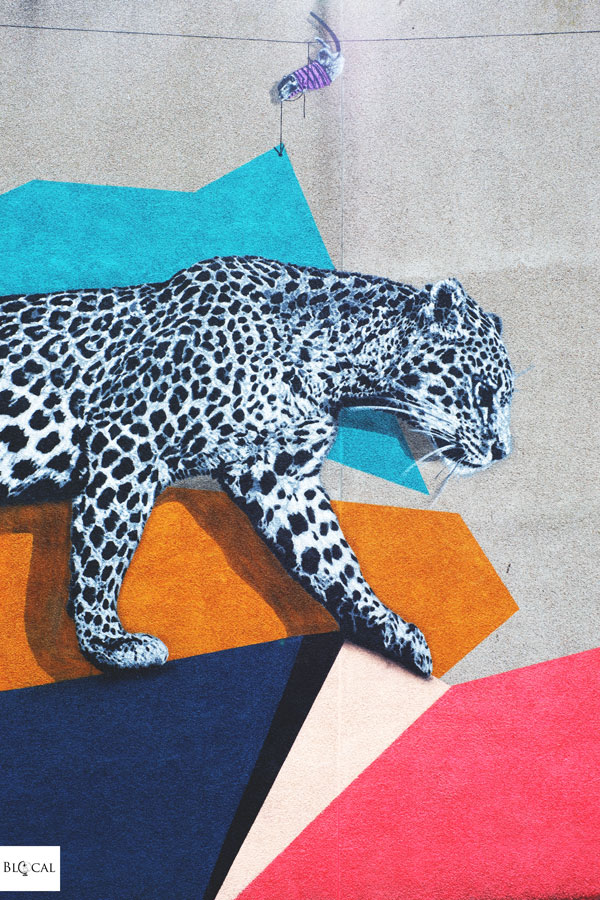 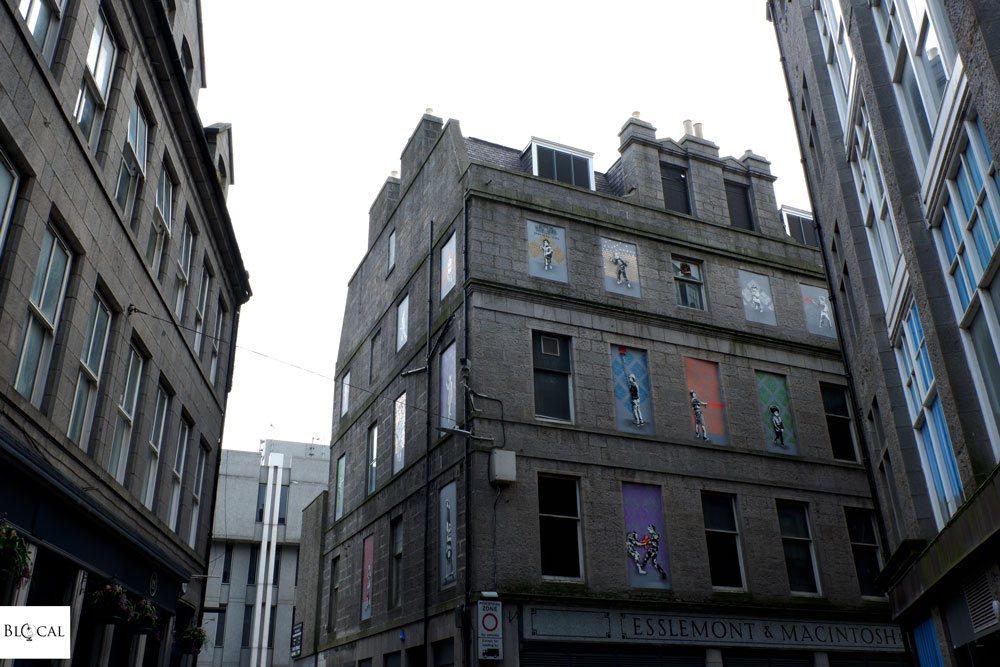 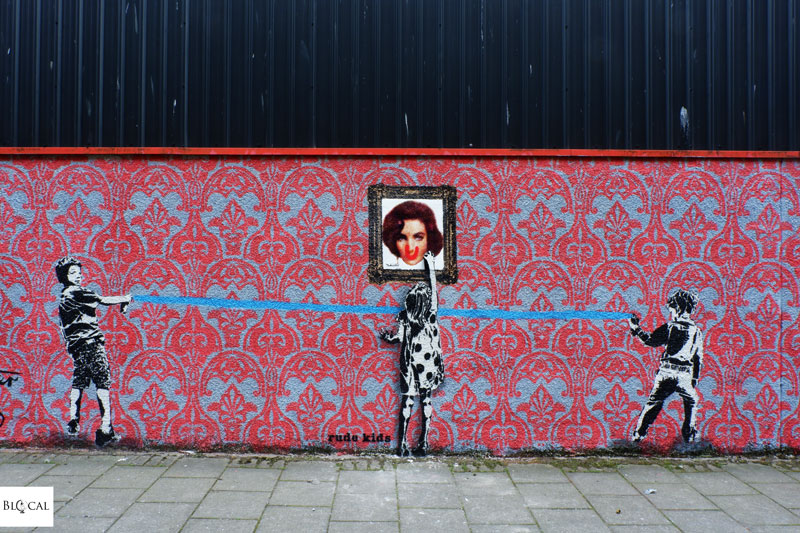 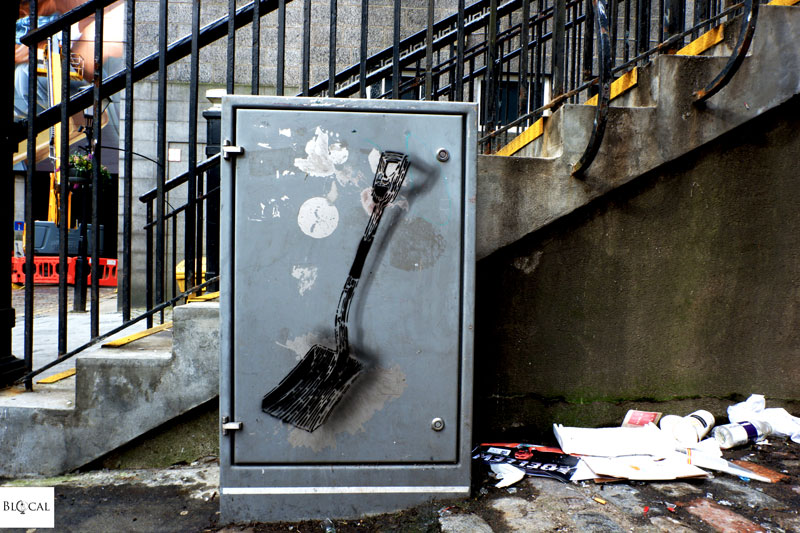 Representing stencil art were the talented Hama Woods, who did a vivid mural featuring a leopard straight from Aberdeen’s coat of arms and a second piece with her humorous rats, and the over-prolific Dotmasters. His ‘Rude Kids’ have been spotted misbehaving on the boarded out windows of the Esslemont and Macintosh building and on a long wall on Jopps Lane. Moreover, the artist gifted the city with lots of spontaneous street art. 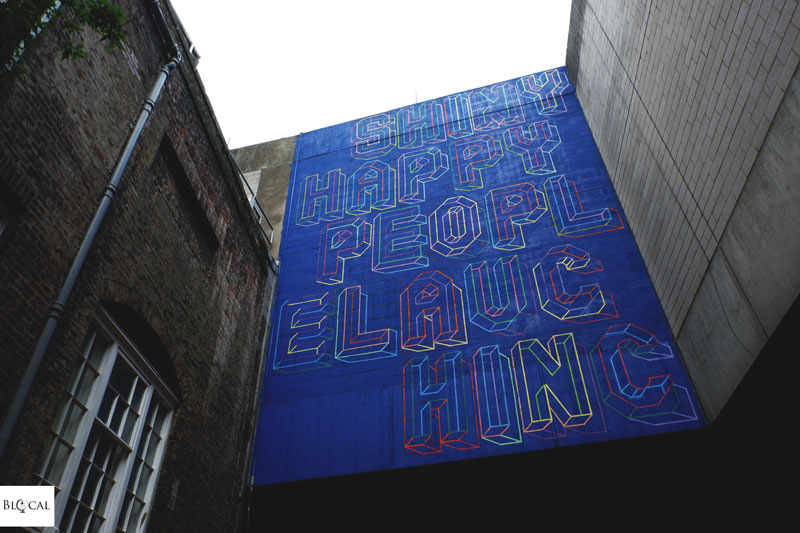 Having heard about the shimmer of Aberdeen’s granite walls when the sun shines onto them after the rain, typography master Ben Eine wrote ‘shining happy people laughing’ on a dark alley leading down to Aberdeen’s infamous ‘tunnels’. It’s only the second time that the artist uses this neon typeface on a wall, although it is already a strong asset of his studio production.

Elegant yet outstanding, Hush’s Japan-inspired figures are perfectly framed by the shiny granite walls of the city. 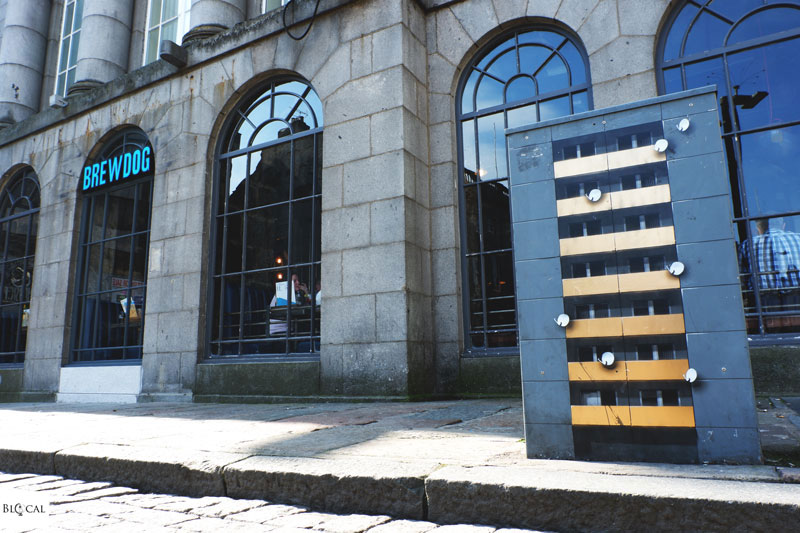 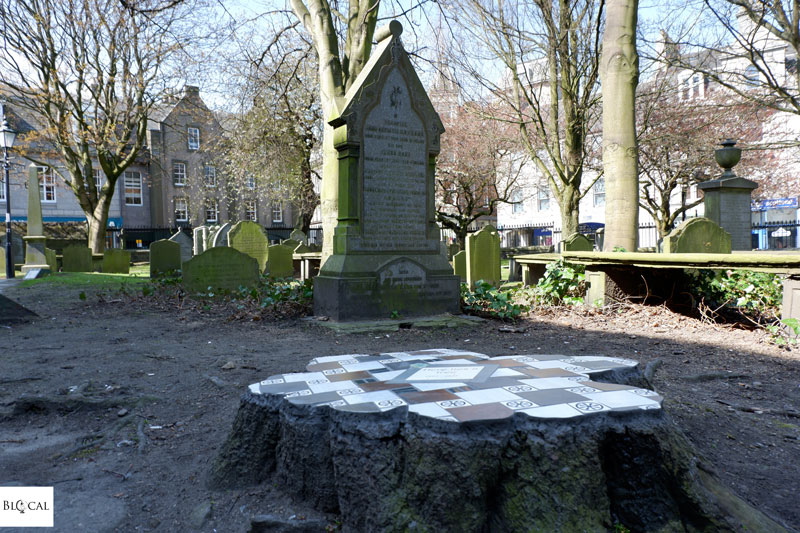 Evol’s iconic electric boxes and Ememem tiling pieces, which use the imperfections in public space as a source of inspiration, can be found all around Aberdeen, while a more attentive look is required to spot the three artworks left behind by Julio Anaya Cabanding in abandoned yet central areas of the city. (below) 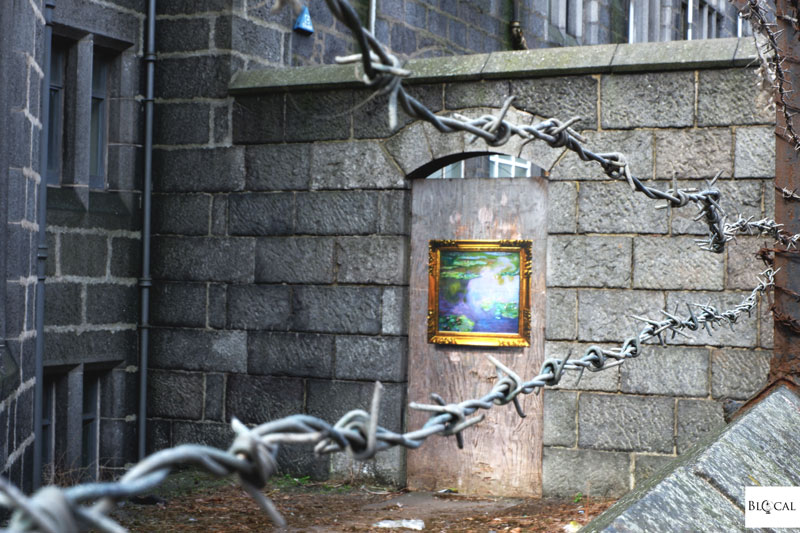 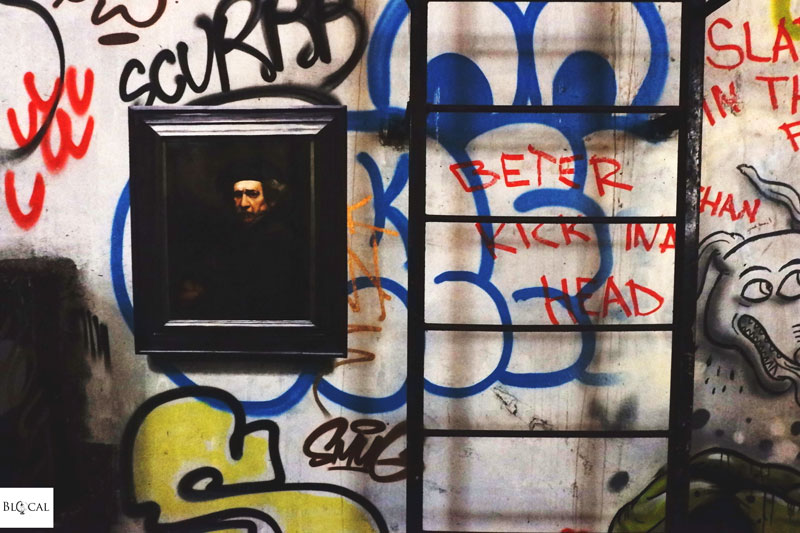 Once again, Nuart festival calls to go off grid and step off the busy shopping streets to marvel at the Granite City from a different perspective. The first three editions of Nuart Aberdeen festival have built up a public art collection that is not simply prestigious and with worldwide appeal, but also and foremost a point of pride for Aberdonians.

“We, of course, get the occasional tourist” says Nuart Aberdeen’s Host Jon Reid (https://www.blocal-travel.com/interview/jon-reid-nuart-aberdeen/) “but most attendees are fellow Aberdonians – the same people who complain that nothing cool ever happens in Aberdeen. Making them change their mind feels awesome! For every tour I’ve ever done people come up and shake my hand. I remember one tour, when a guy came to me while we were walking up to the next mural and he said, ‘You know what, Jon? When my wife told me I was getting up early to attend a bloody art tour I thought ‘what the hell!’ but you are so engaging and enthusiastic about it that now I can’t wait to see what’s next.’ That was the ultimate compliment: someone who wasn’t interested at first, someone who couldn’t be bothered, was eventually able to appreciate what he was seeing. By the end of the tour, he was in front of the pack; he wanted to see more”.