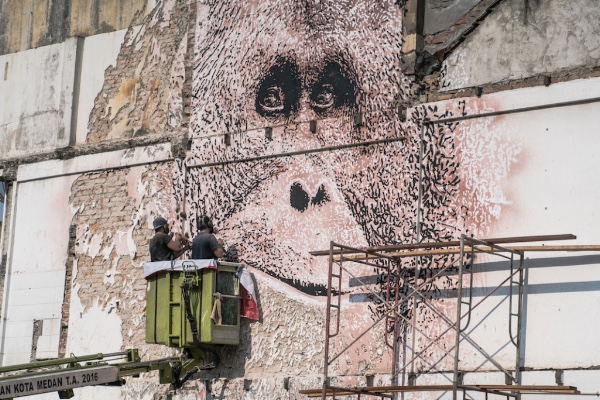 Alexandre Farto AKA Vhils is the latest international artist to join Splash and Burn, a creative initiative using Art as an alternative platform projecting critical ecological issues. Vhils’ contribution focuses on the discovery of a new species of great ape in Indonesia and a recently approved hydropower dam set to decimate their habitat.

Vhils is the 9th artist to participate in the environmental campaign, which calls attention to the destruction of rainforests in South east Asia. Addressing the effects of the unsustainable production of palm oil both locally and globally, the latest project confronts an issue adjacent to palm oil but central to the destabilisation capitalist expansion can incite, with the consequences for communities, wildlife and our eco systems considered collateral damage. 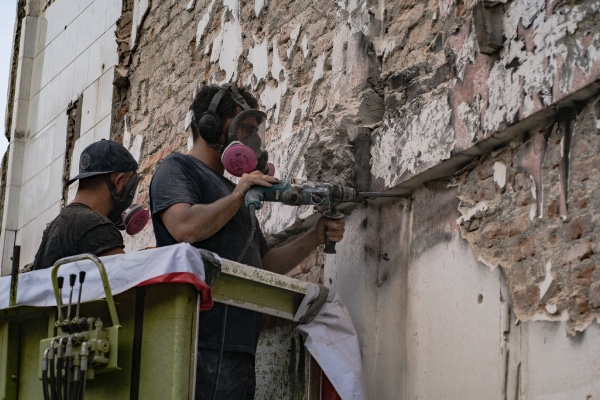 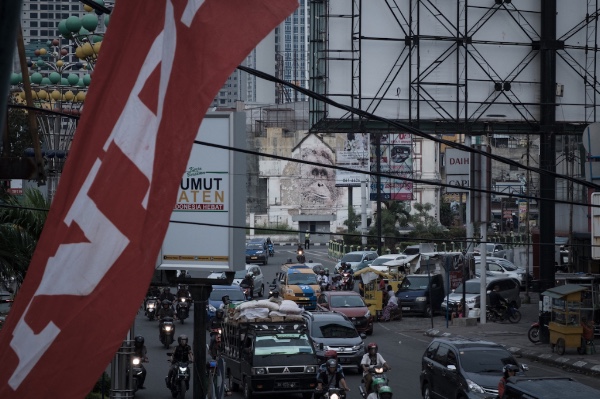 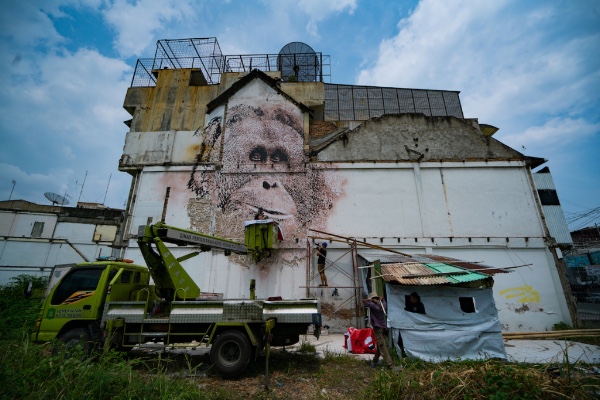 ”The world is not taking the time to consider how to move forward, there is no effort to reflect on the real impact of decisions. For this project what I really wanted to do, was to give my work in order to bring attention to a situation- to create discussion on an issue. It is the artists who power the cities we live in – who counterbalance the pressures of different issues by creating Images on walls. You can start a discussion and bring to the public issues that otherwise would not be there.” -Vhils 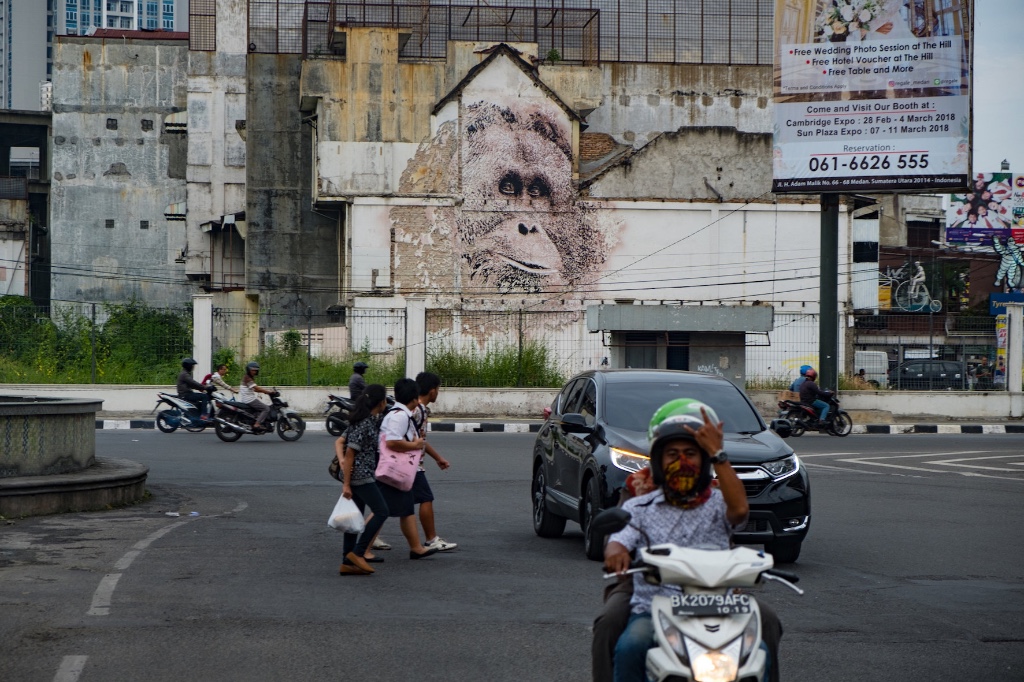 In early November 2017, scientists announced the discovery of a new species of Great Ape in Sumatra: the Tapanuli Orangutan. With only 800 left, this is the most endangered Great Ape species in the world. Found only in the Batang Toru forest in the Tapanuli highlands of Northern Sumatra, the species’ core habitat is threatened by the development of a 510MW hydropower dam, financed with overseas investment. Despite the catastrophic consequences for the new species, this project has been approved and is currently in the pre-construction phase. North Sumatra Hydro Energy (NSHE), the projects’ investors, and the Indonesian government have a collective opportunity to halt the project in light of this information to troubleshoot alternative sustainable solutions. Yet government permits have already been issued, with construction of access roads already underway. Not only will the development destroy the existing habitat, it will also prevent the connection of habitat patches with forest corridors, a priority action to protect the long term viability of the species. Information and core logistics support provided on the issue by Orangutan Information Centre and the Sumatran Orangutan Society. 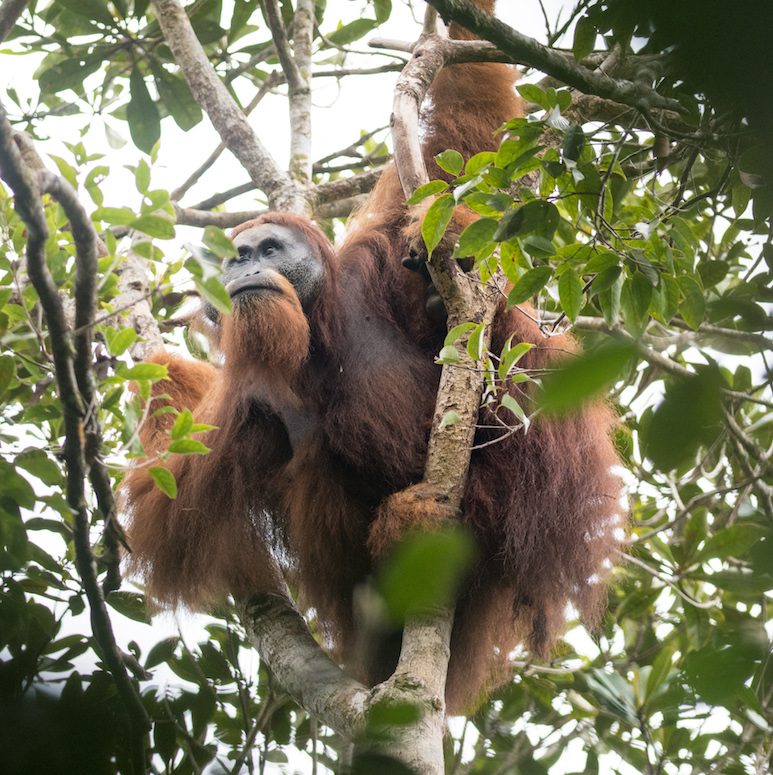 Togos, the alpha male of the area. New orangutan species discovered in Batang Toru, North Sumatra. They are on the brink of extinction due to a hydropower dam project. Contact: Helen Buckland SOS. Picture: Andrew Walmsley

As local NGOs assemble with a petition to cease construction and peaceful protests in the coming weeks; Splash and Burn initiate the first wave of awareness with artist Vhils. Exposing the issue to a global audience aims to encourage the protection of the Tapanuli orangutan’s habitat. Splash and Burn continues to work at raising a wider consciousness of the impact of globalisation, promoting the practice of sustainable activity with grass roots concepts to ensure long term change.

”It comes down to activists and artists to raise awareness for the tensions that globalisation creates. That being said I personally think its a new Pandoras box, it’s hard to stop. The only thing we can really do now is act on the dark side of globalisation, which is really the reason we are here doing Splash and Burn.” ~Vhils

The project is supported by Sumatran Orangutan Society and the Orangutan information Centre. Donate now here!