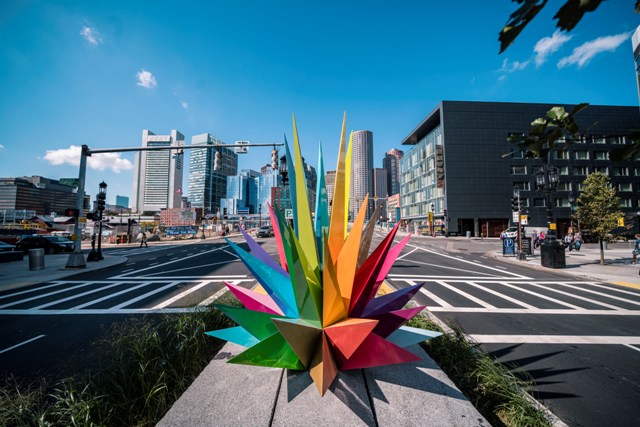 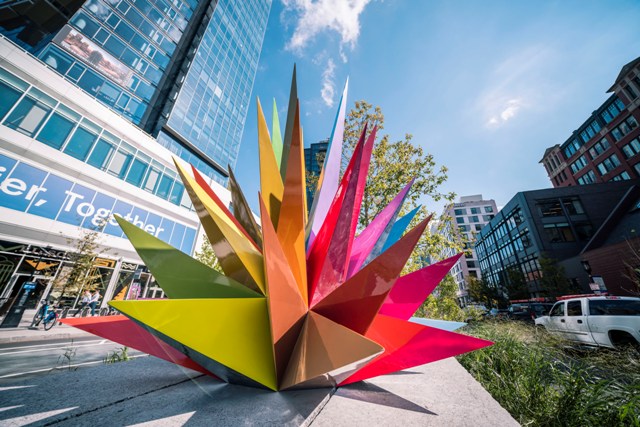 The installation invites imagination as it explores some of Okuda’s favored themes – the tale of life and coexistence, and the mythological edge where the animal kingdom encounters with the human world. “Art must be present in public spaces constantly and my mission is to transform these spaces in a way that further enhances the passerby’s experience. I aim at creating vibrant places that are filled with color and positivity. I want people to stop looking at the pavement and start looking up and around.” says Okuda San Miguel. 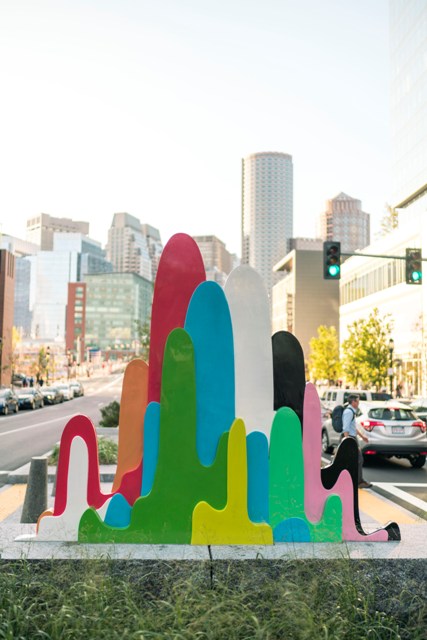 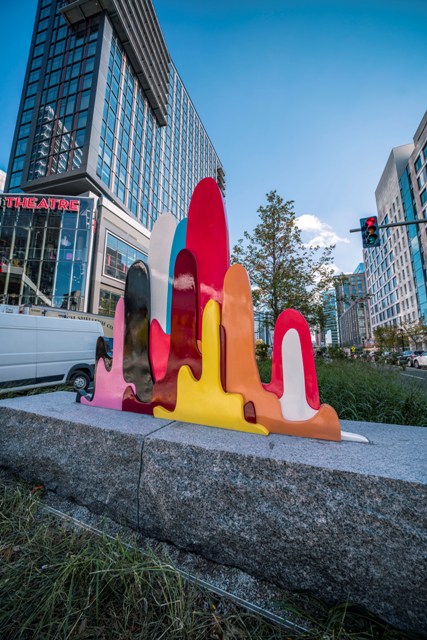 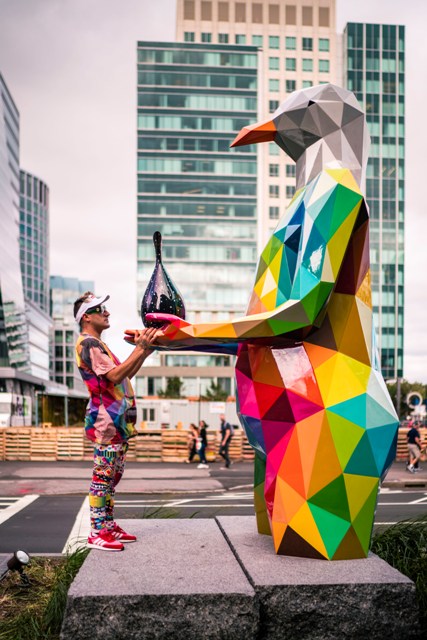 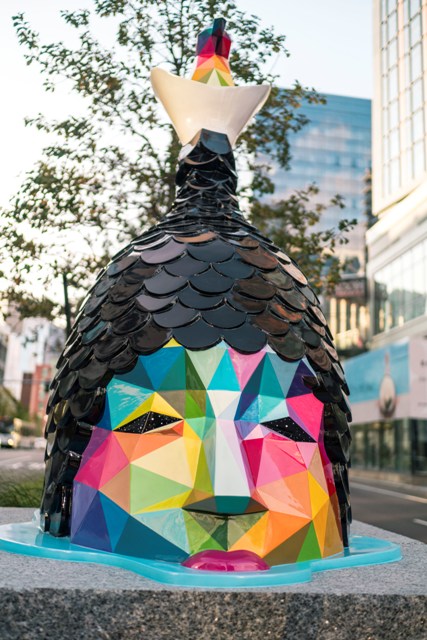 Launching his career in his hometown of Santander in Spain, Okuda soon received global recognition for his geometric surfaces and multi-colored ephemeral architectures. With Air Sea Land, Okuda brings his talents to Boston for the first time, allowing art to inspire and unite Seaport as it visually anchors the neighborhood and connects it graphically and thematically to other works and points across the city. Moved by Seaport’s tangible coexistence of air, sea, and land, Okuda created an iconic rainbow using organic shapes, forms, and symbols.

Justkids curator Charlotte Dutoit explained “It’s fantastic to present Okuda’s work in such a dynamic and rising neighborhood; We are grateful for our partnership with Seaport that through this
project expands art in the public space for everyone to embrace. Playing with the ever intriguing idea of the origins of life Okuda creates something that really speaks to all.” 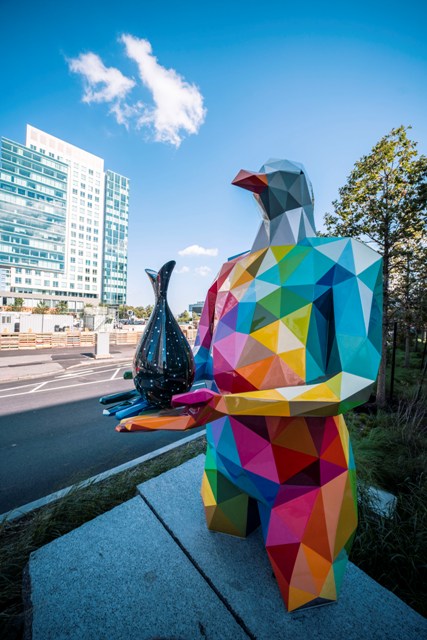 “We are always looking for exciting new ways to enhance the Seaport neighborhood experience through beautiful and welcoming world-class public spaces. We are thrilled to welcome Okuda to Boston and we hope visitors from across the city and around the world are surprised and delighted by this extraordinary installation,” says Yanni Tsipis, Senior Vice President, Seaport at WS Development. 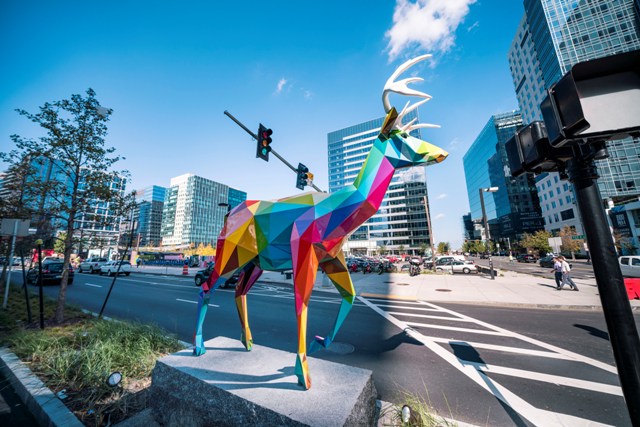 A mobile tour of Air Sea Land runs on the Cuseum digital platform. The tour is engaging to both in-person visitors and those who want to learn more about the installation from afar and can be accessed at http://bostonseaport.xyz/learn. 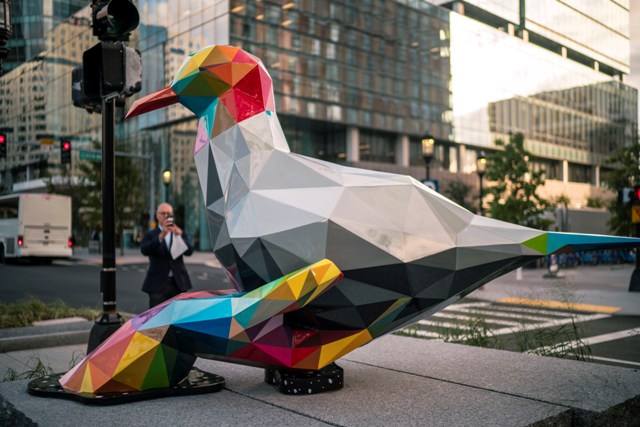 About Okuda
Okuda San Miguel is a world-renowned street artist from Santander, Spain, best known for his unique iconographic language of multicolored geometric structures and patterns on the streets, railroads and abandoned factories around the globe. In addition to his work outdoors, in 2009 Okuda started his own studio practice and his fine art has been exhibited in galleries from India, Mali, Mozambique, United States, Japan, Chile, Brazil, Peru, South Africa, Mexico and the European continent, among others. Okuda’s distinctive style of geometric harmonies emboldened with intense colors can make his artworks feel like they’re from a parallel universe. His largescale murals and street sculptures can be found dominating parks and squares in towns around the world. Okuda’s mixed media approach to works on canvas and paper is diverse with elements of embroidery, collage and wood, highlighting his insatiable thirst for creation and multitalented ability.

About Justkids
Justkids is a creative house that conceives and produces comprehensive art projects on an international scale with some of the world’s most engaging artists, curators and strategic consultants. Founded in 2014 Justkids supports a diverse team of inspirational pros and upcoming talents to meet the demands of a constantly evolving audience by delivering public art, cultural place making, art events and offering new art experiences for institutions, cities and leading lifestyle brands featuring the best of contemporary visual culture and creativity.

About Boston Seaport
Culture, industry and community converge making Boston’s Seaport district a dynamic and vibrant area that is quickly emerging as one of the most exciting neighborhoods and destinations in the country. Seaport is currently Boston’s single largest development project. WS Development is transforming 23 acres of waterfront land with a carefully selected mix of residential, hotel, office, retail, entertainment, civic and cultural uses, and public open space across the district. Combining the best of historic and modern-day Boston, Seaport is rapidly becoming a national destination for fashion, culture, arts, dining and entertainment, and technology and life sciences, expanding Boston’s position as one of the top cities in the world. For more information visit www.bostonseaport.xyz , follow Boston Seaport on Facebook, and @SeaportBos on Instagram and Twitter.

About WS Development
WS Development is a Massachusetts-based property developer dedicated to the creation of places where people want to be. With more than 20 million square feet of existing space and an additional five million square feet under development, it is one of the largest privately-owned development firms in the country. In business since 1990, WS is a vertically-integrated company that develops, owns, operates, and leases over 90 properties, including urban buildings, lifestyle centers, power centers, community centers, and mixed-use developments. Its goal is to be a contributing member of each community it serves. 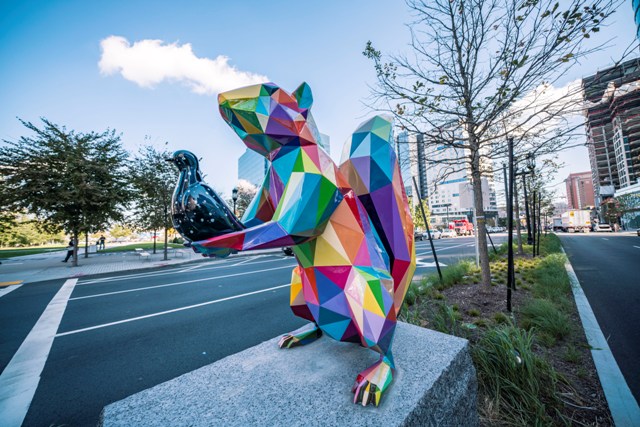 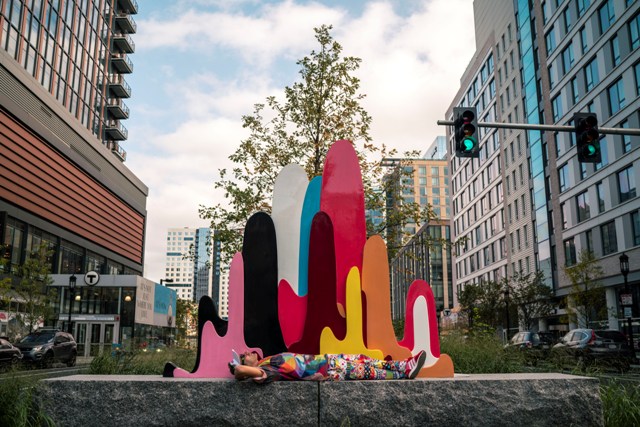