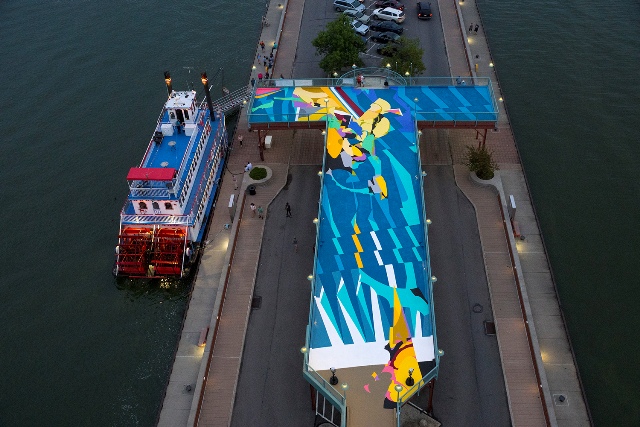 A new unusual mural just finished by Sat One in the port of Erie, Pennsylvania. Curiosity is a driving force in SatOne’s life.The artist is drawn to engage with people and environments that offer unique stories.It leads to the discovery of situations that others may overlook in their daily routine.

This is why he finds the definition of flotsam so intriguing – people or items that have been rejected or regarded as worthless. In traditional maritime culture, this referred to the wreckage of a ship and what debris may eventually wash ashore. But, as people, he thinks all of us at one point in our lives experience a moment when we feel cast aside and not valued. 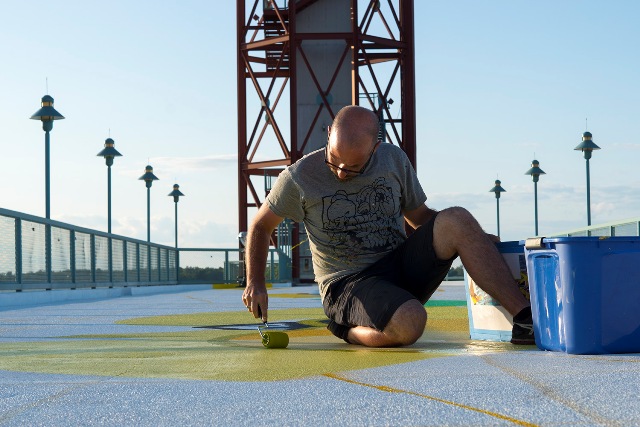 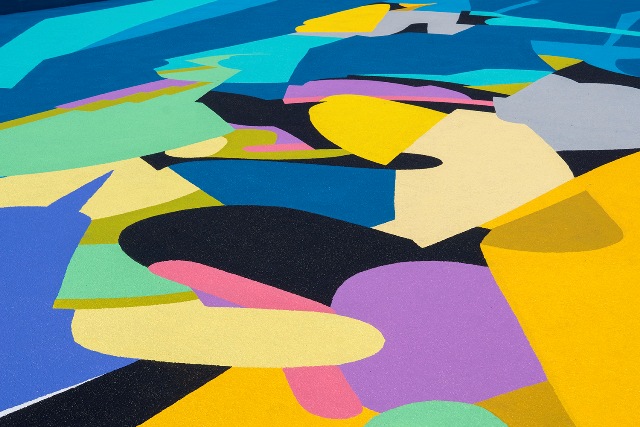 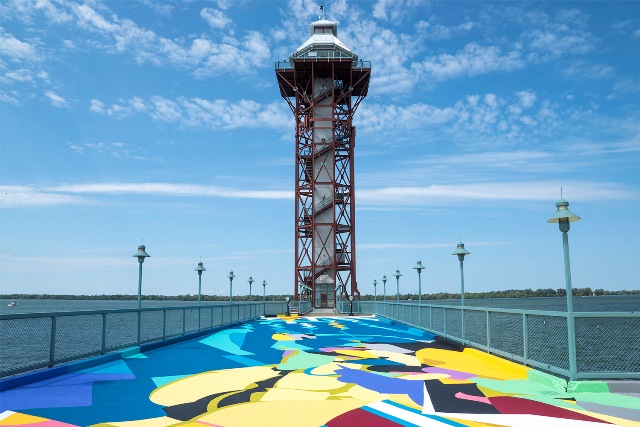 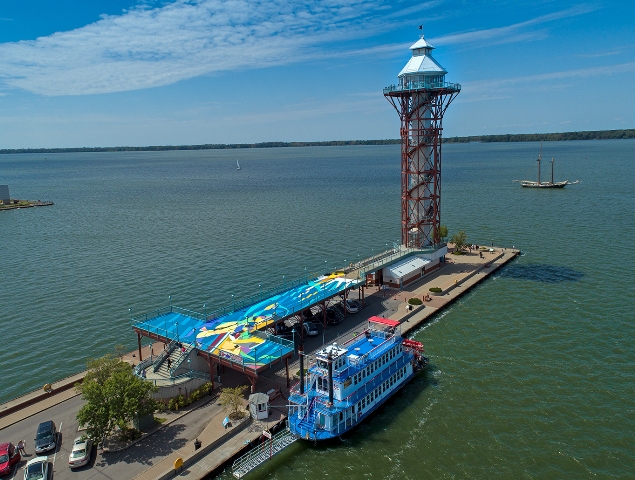 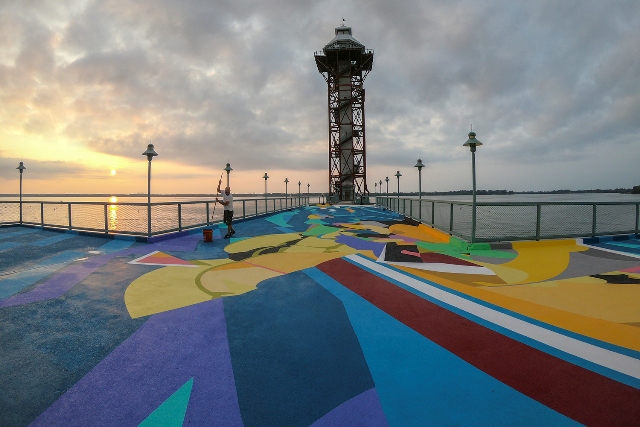 Within this image the viewer may discover abstract objects that were carried to the shoreline by the momentum of the spuming waves. The triangular element points across jetted ripples in the water to the wreckage from which it came. And in that, we find the story of a treasure waiting on the sand to be reclaimed by those who are curious. Once discovered, how will this item be re-imagined and what new purposes may it serve?

I was invited to curate this project having only seen photos of the observation deck. There are a lot of variables to consider with a surface like this, and sometimes those variables go undefined until you’ve had an opportunity to interact with the site in-person. Scale, quality and texture of the surface, and the surrounding environment, both built and natural, will influence an artist’s design and process. Because there were so many unknowns related to this project, I knew it was critical to select an artist who has a strong ability to adapt and easy to work with. 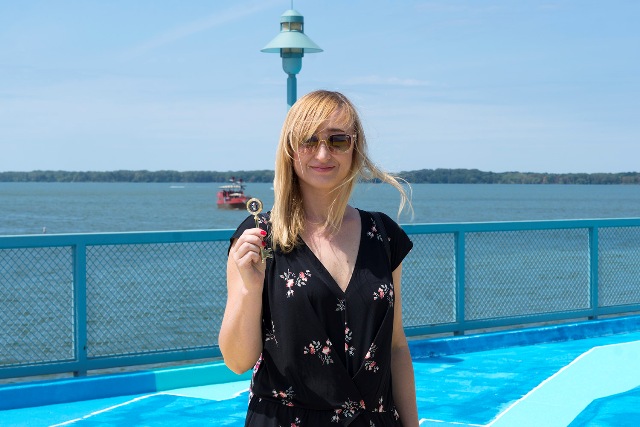 The site presented 12,000 square feet (more than 1,000 square meters) of usable surface, which was located at the foot of the street that serves as the main vein into Downtown Erie. The mural would be painted on the surface of an observation platform surrounded by Lake Erie Bay. The site was a location valued by both tourists and residents. Viewers would have the opportunity to see the mural from two perspectives, one while standing on the surface itself and the other 137 feet above the mural from a second observation deck.

The project posed some logistical challenges. Being on Lake Erie, there was a constant strong wind that during the first day was almost deafening. From sunrise to sunset, there was no escaping from the sun. If it rained, that meant the entire day was essentially a wash. And, because the observation deck has no covering, seagulls and other birds could make their mark on the surface just as easily as the artist. 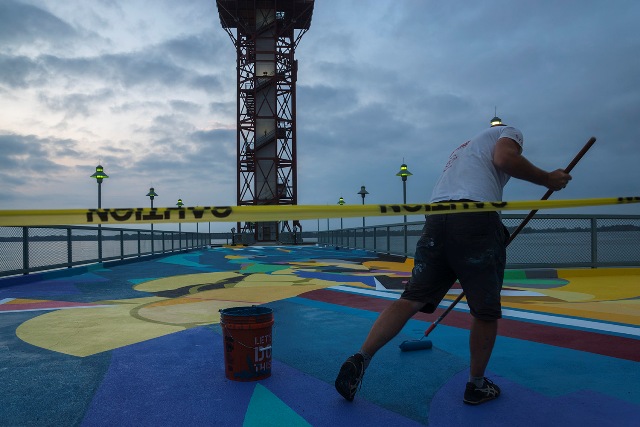 Our goal was to enliven the site with bold colors that fit the environment. We also wanted to avoid creating a piece that served as a literal representation of maritime culture or Erie’s history. We wanted to create a piece that challenged the viewer to use their imagination.

This was my first time working in Pennsylvania and my first time working with SatOne. Even though I had not previously worked with him, I knew he had a reputation of excellence and is strongly respected in the street art community. Throughout the entirety of this project, SatOne demonstrated professionalism, efficiency, and stamina – working between 10 to 14 hours each day. In a total of six days, 30 gallons of paint, 22 different colors, and a whole lot of sweat went into creating Flotsam.

Erie, Pennsylvania has lived a story similar to many other cities located in what’s referred to as America’s rust belt. Our economy boomed well into the 20th century as a result of the Industrial Revolution. But, globalization and automation have brought a need to adapt and evolve. In order to survive, we have to shift our attention to new horizons that remain ahead; instead of holding tightly onto the nostalgia of where we’ve been. 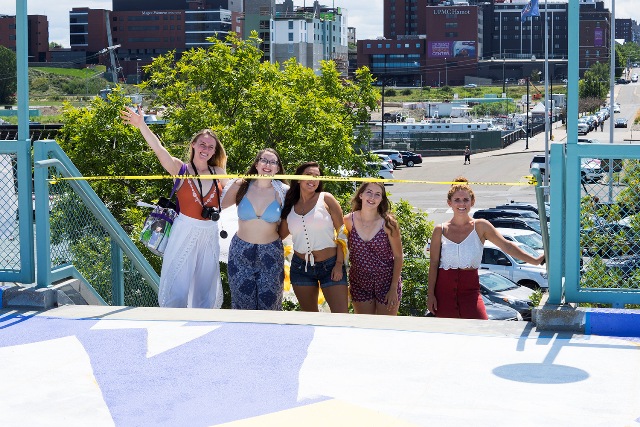 Like never seen before, Erie is generating a momentum that will lead to measurable change. Under Mayor Schember’s administration, there is a focus on developing Erie’s Downtown and Bayfront to be a world-class destination. As an arts administrator, I believe deeply that the arts can play an important role in encouraging both residents and tourists to see Erie differently. As a city, we must be intentional with what assumptions, ideas, and behaviors we keep and what we must discard to become a thriving mid-sized American city in the 21st century. This is why Rafael’s interpretation of flotsam and jetsum is a beautiful metaphor for Erie. 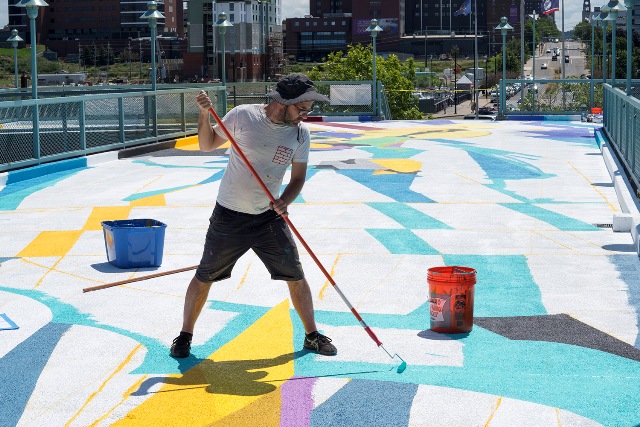