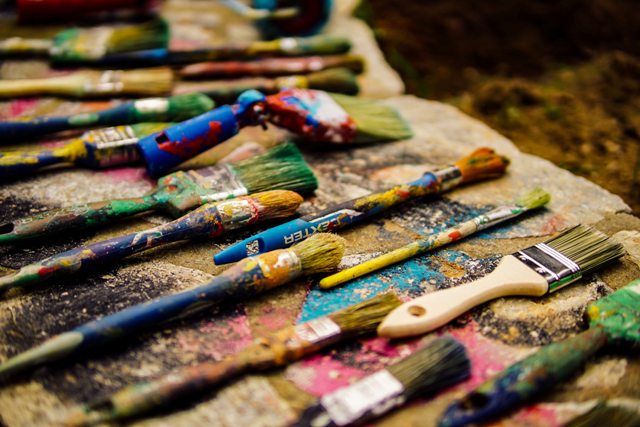 Located off the coast of Florida, the Bahamas consists of more than 700 islands and 2,000 rocks and cays. It is well known for its clear and turquoise water, mix of white and pink sand beaches, and thriving nightlife. The Bahamas has long been a popular destination for international tourists, but in recent years, tourism has increased nearly 20 percent, largely due the out islands’s growing appeal.

But the Bahamas has a lot more to offer than beautiful beaches: It is a nation with a complex history and vibrant culture, including a thriving street art scene, which has drawn inspiration from the nation’s troubled past and mix of cultures. Nassau — the capital of the Bahamas and the location of the majority of the nation’s population — is the best example of this. The following will examine a few specific public murals in Nassau from the last few years. 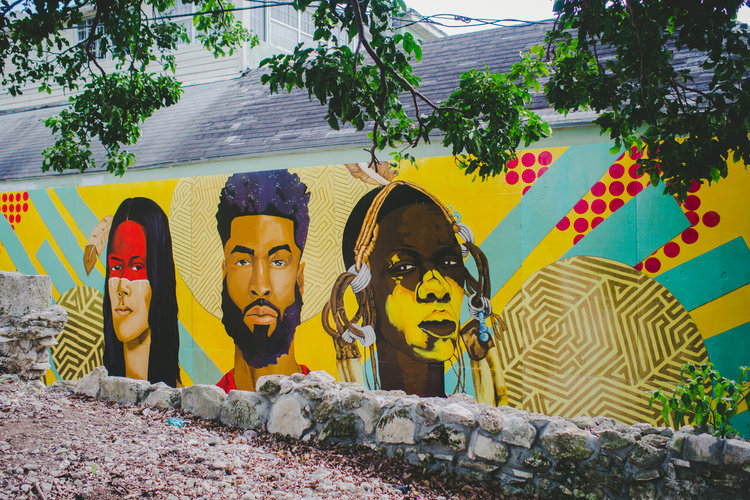 Located on Hospital Lane, this massive mural depicts three faces against a mostly yellow backdrop. From left to right, the mural features an indigenous man, a modern Bahamian man, and an African tribesman. Their expressions are cool and confident, if also a little enigmatic. The mural’s focus reminds Bahamians of their complicated and troubled past, but also of their history of healing after invasion and colonial rule. The healing is not done, either, as further demonstrated by the mural’s location on Hospital Lane and the use of yellow in the mural, which suggests strength and growth. More than healing, Henderson has stated that she wants viewers of her mural to feel “pride” when they gaze upon “Legacy.” 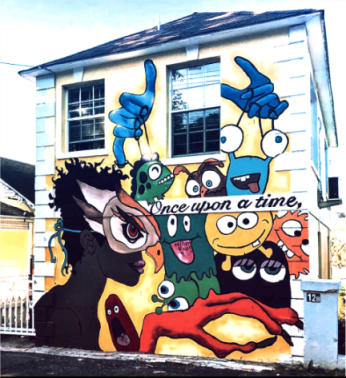 “Once Upon a Time” by Angelika Wallace-Whitfield
This mural is located in downtown Nassau on Delancey Street, near the John Watling’s Distillery. For Wallace-Whitfield, the Bahamas serves as her main inspiration in her art, both in her murals and in her paintings. “Once Upon a Time” features a variety of brightly-colored characters against a yellow backdrop. Some of the characters on the right side of the mural include a green ghost-like blob with its tongue out, a brown owl, and an orange fur ball with crossed eyes. Above the characters are two blue hands holding strings, implying that the bizarre-looking creatures are puppets. The words “Once upon a time” are written over top of the puppets. On the left side of the mural is a black woman (seen from her shoulders upward) who gazes at the puppets. Her lips are pink and she’s wearing a hawk-like mask with red eyes that conceals her eyes, nose, and forehead. A large, red bird-like claw is at the bottom of the mural, lazily displayed, as if it is neither holding the puppets up nor seeking to attack them. 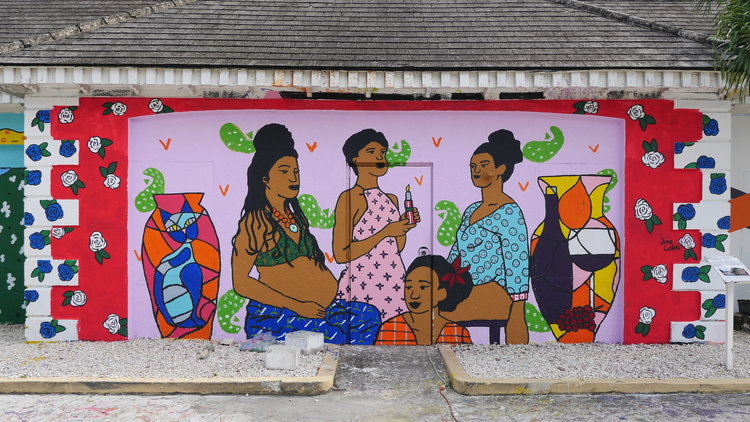 Untitled Mural by June Collie
Commissioned by the National Art Gallery of The Bahamas (NAGB), the untitled mural features four black women against a pale purple backdrop that is framed by a red border with white and blue roses. The women wear outfits of different colors and patterns and are not looking at one another. Two of the women are sitting down, facing each other, while the third woman stands in the middle, and the fourth woman appears to be sitting on the floor (but her body is out of frame).

The woman sitting on the left is seemingly pregnant, and wears just a bra and pants, while the woman sitting on the right appears to be wearing only a shirt, her legs bare. There are also two large vases in the scene, one on each side of the mural. In one vase there is a cat, and in the other there is a bottle and glass of wine.
Like Henderson and Wallace-Whitfield, Collie is an emerging artist in the Bahamian street art scene. Collie typically focuses on women in her murals and artwork, and uses bold colors and patterns. This is important when thinking of women’s role in art globally and historically in the Bahamas. The women in her murals are bold and unapologetic, as seen in the untitled mural described above.

A Plan to Revitalize the Bahamas

Photo by russn_fckr / The Unsplash License

Over the last several years, NAGB has encouraged local artists to create engaging public murals. One more recent NAGB theme was “Tellin’ We Story,” which served to inspire artists to create murals that focused on historically-significant events or folklore from the Bahamas. The goal has been to inspire the community and revive the area through the color, life, and storytelling abilities of the murals.