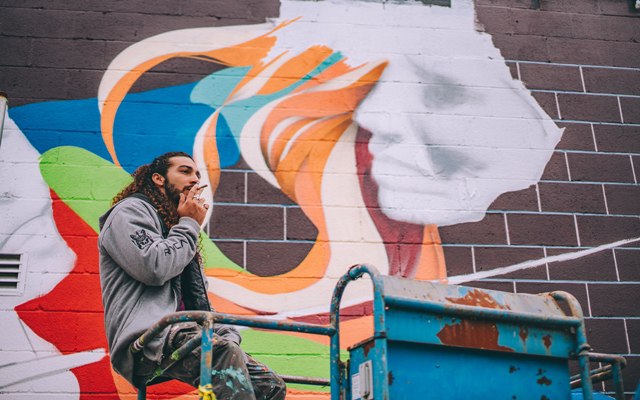 The history and culture of street art are nuanced and complex. In many ways representing a rebellious subculture throughout its creation and development, many of the motifs are some of the most famous murals in the world today include a rebellious, anti-establishment sentiment. Throughout its history, street art culture has meshed with other subcultures that incorporate some of the same themes, including hippy culture and even stoner culture.

It’s no surprise that these movements share many of the same cultural artifacts including anti-war political thought, social libertarianism, and even a focus on mind-altering substances like Cannabis. Cannabis and other psychoactive substances including psychedelic drugs have played an important role in molding and informing many of these subcultures. It, therefore, makes sense that psychoactive drugs like Cannabis make a frequent appearance in street art pieces.

It could well be that the prominence of Cannabis in these rebellious and anti-establishment subcultures has to do with its controversial illegality and inclusion as a Schedule 1 illicit substance by the US federal government. In this way, Cannabis acts a rallying cry for the perceived oppression of the masses by centralized government authority. It’s an idea that has always been thematic of street art, especially considering that it has historically been a medium by and for the people.

The intersectionality of many of these ideas means that Cannabis is often front-and-center of many iconic murals and other works of street art. Keeping this history and cultural relevance in mind, let’s take a look at five of the most amazing pieces of Cannabis street art today.

There are few pieces of street art that illustrate the anti-establishment parallels between Cannabis culture and street-art culture than the Levity and Cannabis mural in California. Depicting several police officers in retro uniforms in the foreground and rays of rainbow light streaming in through the windows in the background, the mural showcases the contrast between freedom and order in many ways. 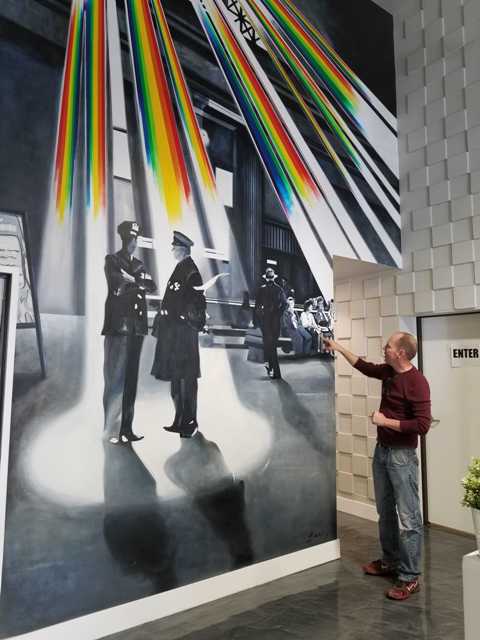 The mural is of a current-day dispensary that was once a police station. The dispensary is located in Long Beach, California which is the same location that the mural has been painted. The piece, therefore, signifies the shift from established order to civil freedoms, both abstractly, and through the physical structure of the dispensary that it portrays.

It was painted by artist David Early, who’s said that it is the largest oil painting he’s undertaken in his career. The mural represented another challenge as well. According to Early, it was no easy task to accurately display the two contrasting themes of the piece.

To Early’s eye, these two themes were the history of the dispensary as a former police station and the modern use of Cannabis for alternative medical treatments.

The mural comes in an impressive twenty-by-thirty foot dimension and incorporates a mixture of black-and-white, as well as rainbow color schemes to achieve a dramatic, contrasting effect. 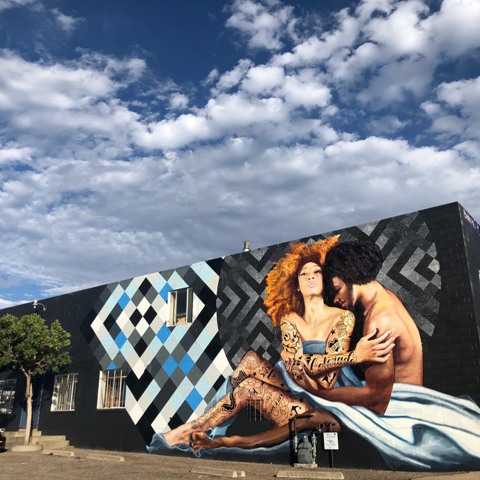 A Message of Love

The second mural on our list is painted on the wall of a highly-trafficked dispensary in Denver. It comes as no surprise that the piece was also commissioned and sponsored by the dispensary’s owner, Amy Andrle. Andrle saw this piece as a way to give back to the community with the proceeds of her dispensary business and to support the work of artists she perceived as extremely talented.

The artists Andrle is talking about are Patrick McGregor, Jason Garcia, and Mike Giant. McGregor has a background specializing in large murals in a style of realism and including character-specific portraits.

Mike Giant is best known for his work on graffiti, tattoos, and sharpie drawings, with a style heavily influenced by black ink tattoo culture and a rebellious, revolutionary spirit. Finally, Garcia focuses on studio work, alongside creating murals and many art pieces for different cultural events and celebrations.

The piece is titled A Message of Love and it features a man and woman in a loving embrace. Along with supporting the “enormous talent” of these three artists. In order to do so, Andrle sponsored the Crush Walls event, at which this piece and others were painted.

Artistically, the mural boasts a sharp contrast of black with splashes of rainbow colors, an element of realism that captured the expressions of the models that posed for it remarkably, and an eye-catching, cerebral geometric pattern. These three elements combine to showcase the talents of the three respective artists involved in painting the mural.

The third piece of Cannabis street art on our list is the Woodland Forest mural in Portland, Oregon. Covering the storefront of Alternative Solutions, yet another dispensary, this mural brings a rich depth of greens, blues, and yellows.

Woodland Forest features a beautiful forest landscape, complete with gnarled trees, and a fierce gorilla that makes it look straight out of the universe of Lord of the Rings or The Chronicles of Narnia. The piece conveys the power and beauty of the natural world. It’s painted by artist Pablo Gonzalez, who’s known for his realistic, fantastical style.

Some onlookers have speculated that the deep greens and forest motifs of the piece allude to the usage of substances like hemp alongside Cannabis. According to CBD Kyro, it’s particularly relevant today since the smoking of hemp is now generally legal.

The style of the mural is also reminiscent of some of the many alternative medicines of the natural world often associated with Cannabis. Cannabis users and non-users around the world alike are reportedly experiencing many health benefits of hemp, CBD, and other related substances.

There is a general movement toward hemp and CBD for health purposes, even among celebrities like Duchess Camilla of Cornwall and many others that aren’t smokers of Cannabis. Murals like this serve to indirectly bolster the awareness of these substances in pop culture, much like the recognition of its promise made by celebrities.

Strength of Strains is a massive mural in Washington state. It took over three weeks to complete. According to its artist, Ray Jaffet, the inspiration for the piece came from the idea of common origin.

As Jaffet puts it, “we come from the same plant or planet, and we all develop into different strains.” These ideas of interconnectedness and unity are common themes around street art that includes Cannabis. 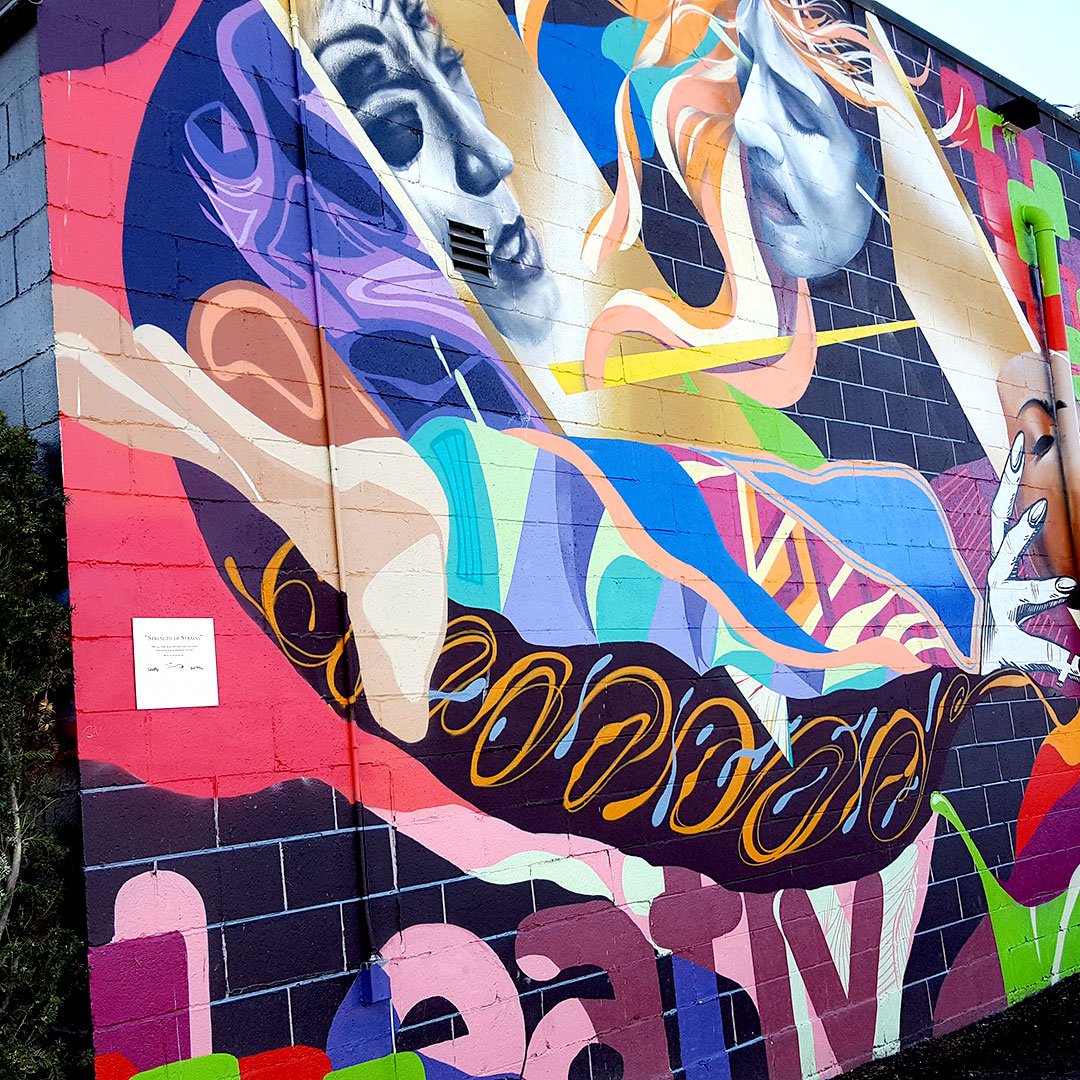 The mural takes up roughly the same amount of space as the face of a ten-story building and is a sight to behold. Find it in Seattle and appreciate the many colors, shapes, and stories that are embedded in the piece.

This particular mural benefited from support from its surrounding community, as many pieces of street art have. In fact, the majority of the pieces on this list were sponsored by local businesses and organizations. This trend to support street art has grown in recent years.

This mural is a depiction of the Port of Oakland and pays homage to Magnolia Wellness, a dispensary near Western Oakland. It uses a rich palette of soothing, textured blues and a few soft greens.

These cool colors are meant to relax the viewer and put him or her at ease. In fact, artist Yulia Avgustinovich encourages viewers of the mural to “sit back, relax and enjoy the details.” 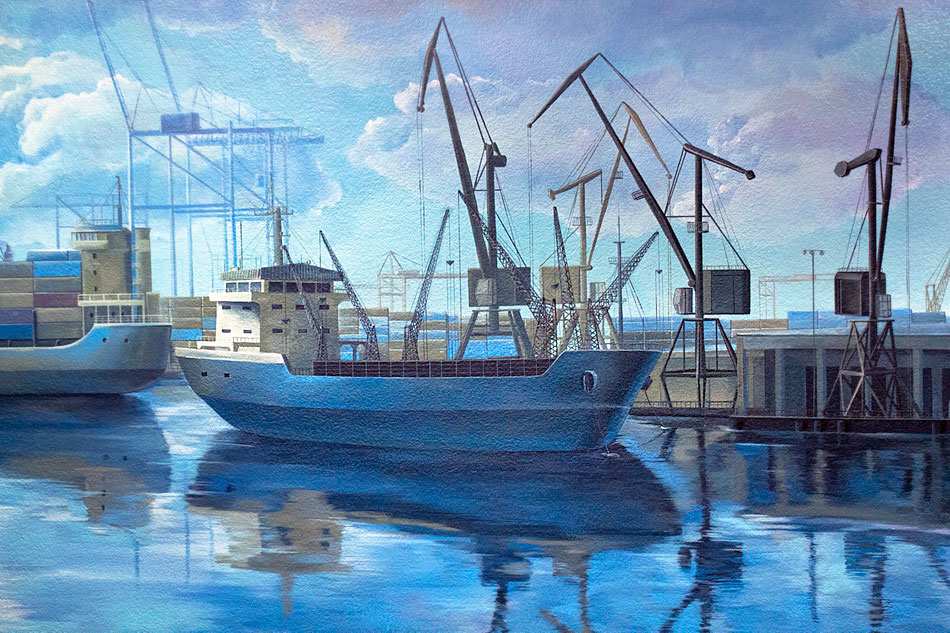 Avgustinovich painted the mural with the goal of helping spectators forget they are in a busy, hectic city and help them connect with a sense of peace and tranquility.

Unlike many of the other canvases that feature Cannabis which feature a psychedelic or surrealist quality, this mural is a perfect exemplification of realism, aiming to place onlookers into the piece of a calm sea.

That wraps up our list. If you have the opportunity to view any of these murals in person, you’re sure not to regret it. They offer an interesting way to gain insight into street art culture and Cannabis culture alike.