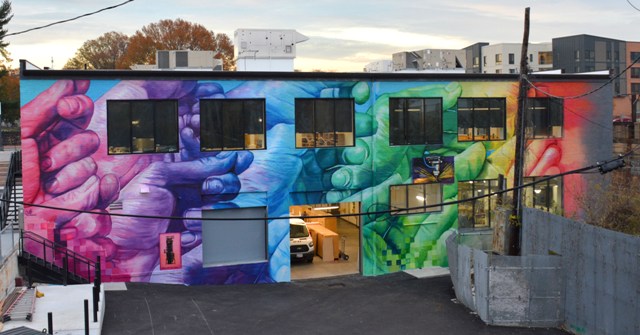 Here we are, presenting and showing you the official pictures of the last mural interventions realized by Gaia. Make yourself comfortable and join acclaimed street artist GAIA in the latest creations as we go through them in detail.

The Human Condition, Painting for Comune di Monno curated [email protected] produced by @toapasserby for Wall In Art at the behest of [email protected] .
This piece portrays two Italian immigrants shot in a study of Ellis Island by photographer Lewis Hine adjacent to San Cristoforo leading baby Jesus on his back whose protective blanket, otherwise known as a ‘space blanket’ flows into the reliquary bust of Carlo Magno. The central figures are flanked by two methods of travel; an airplane on the left, and a boat typical of the steam ships commonly employed to transfer Europeans to far flung continents known as the New World. Finally, the composition is bookended by two petroglyphs; Cernunnos, a celtic deity venerated by the Camuni people’s who once inhabited Valle Camonica, and Kokopelli, a figure of fertility celebrated by many Native American/First Nation peoples, most notably the Hopi. 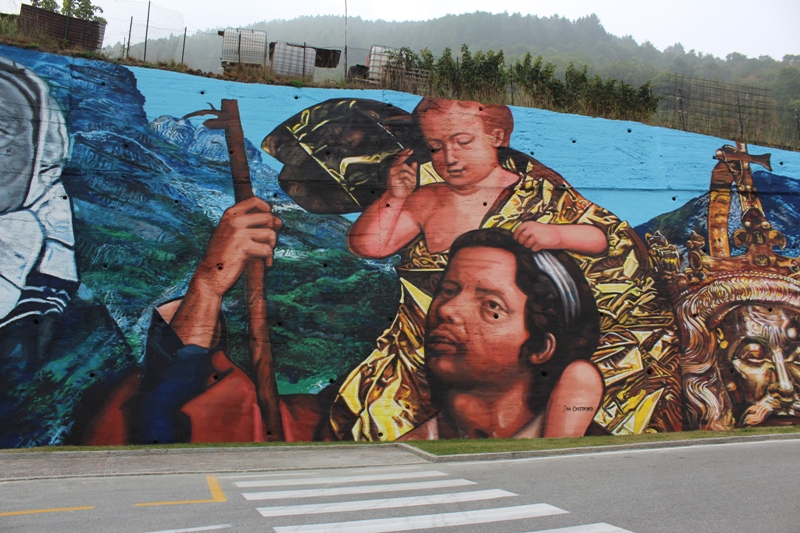 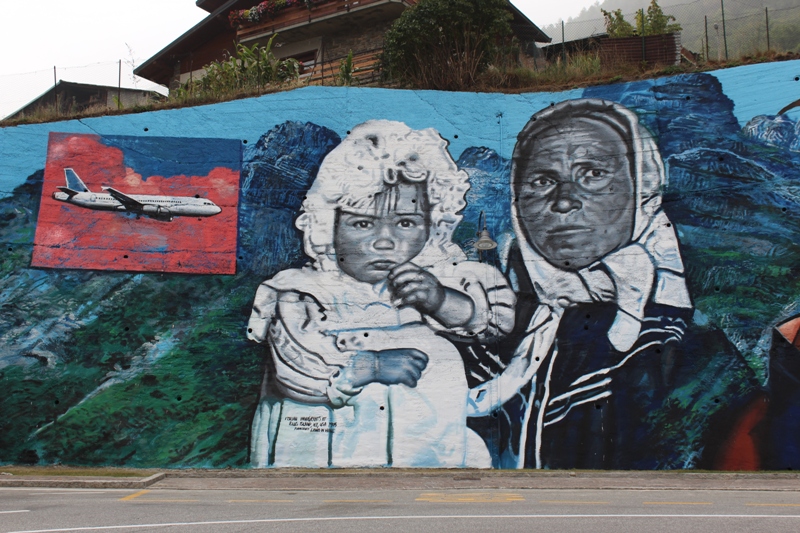 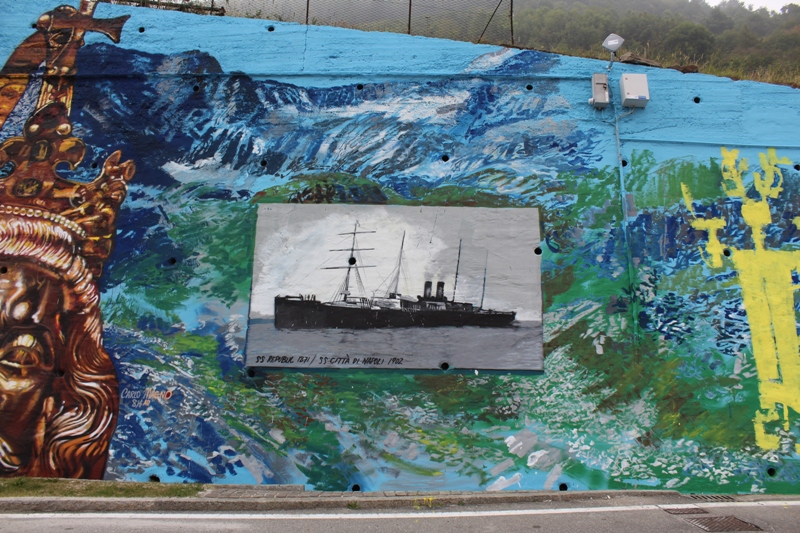 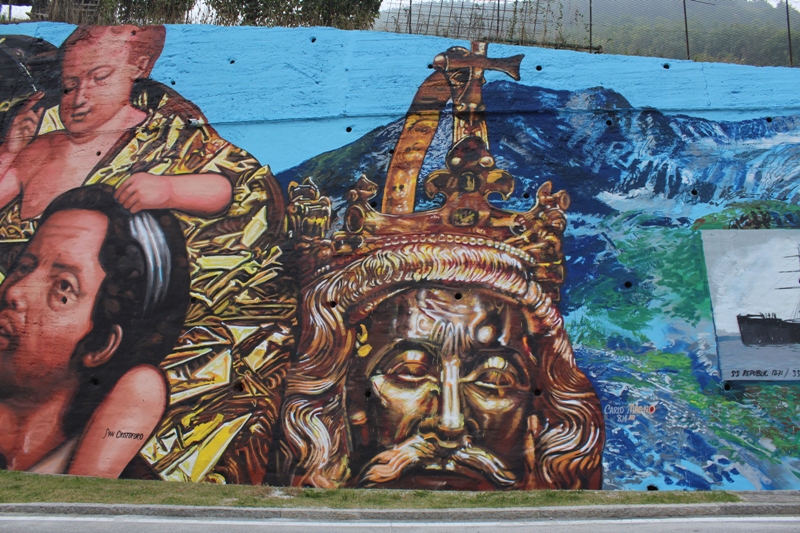 The people of the Italian peninsula became one of the largest modern diasporas in the late 19th century, creating cultural enclaves of protection until achieving assimilation in their host nations. This mural stands as an empathetic reminder to the human necessity to migrate, in an era where the issue of migration now stands at the fore of European politics and threatens the very concept of the nation state.  The artist wants to thank the people of Monno for allowing such a tremendous message.

Vista del Chaco Desde La Centana Del Avion
‘Vista del Chaco desde la ventana del avión’ view of El Chaco from the window of an airplane. Organized [email protected] and a very special thank you to @entes93 and @ozmontania fo r the invitation and opportunity to speak on such a large scale. The constituent elements are as follows: El Pájaro Campana (the Bare-Throated Bellbird) stands alert in the foreground, the national bird of Paraguay and endemic to the subtropical forests of the region, a view of the deforestation of El Gran Chaco which is one of the last agricultural frontiers of South America and is rapidly being decimated, and a massive airplane window and wing, all painted over a pre existing Coca-Cola advertisement. As a land-locked country, the airplane as a symbol of mobility is a pertinent image. Will post better photos of the wall without the lift over the next couple of days. 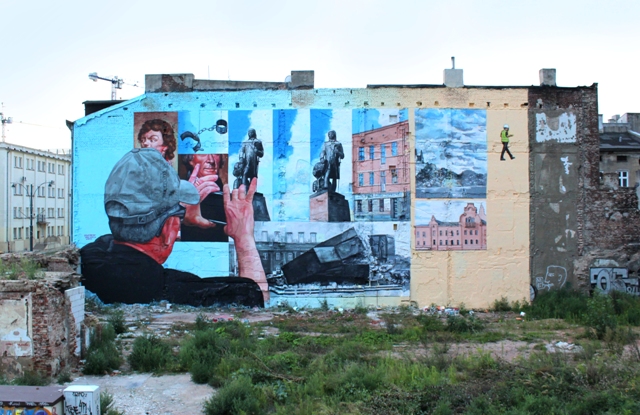 Dementia Lodz
Finished Wall [email protected]_forms entitled Dementia. The constiuent elements are as follows. A portrait of Tadeusz Kosciusko is adjacent to the truncated visage of Thomas Jefferson with shackles over his eyes. In Kosciusko’s will, he expressly stated that his estate would go towards the emancipation and education of African Americans in the South. Tragically Jefferson never executed his friend’s wishes thus exposing the abhorrent double standard of liberal democracy. to the right of this tableau are three copies of the monument to Kosciusko in Plac Wolności. These stages represent the construction of the statue in 1930, its desctruction during the Nazi occupation pictured below and represented by the empty sky in the middle, and its reconstrcuction in 1960. Finally, since the mural is located adjacent to the New fabryczna train station construction site, the theme of erasure and urban renewal continues to the right with three instances of buildings that are no longer present in the immediate vicinity: the mid century hotel Centrum, the building that used to occupy the lot directly in front of the wall that is now demolished, and the old train station that has been replaced by the new fabryczna designed by the engineering group Systra. Very special thanks to Justyna, Asia and of course Teresa. Your hospitality and patience was invaluable.