WOOL ON RESIDENCEAfter the 1st edition of WOOL held in 2011 and the successive and numerous actions produced all over the country and also abroad (at Tour Paris 13 and Djerbahood), the WOOL returned to its origins in an artist residency format, featuring a larger and more diverse range of activities which had a huge participation by all residents and interested community at large, confirming the ‘enormous potential of the city of Covilhã, as a center of diffusion of these new expressions of Contemporary Art “and both the” positive way these events allow regeneration and rehabilitation of degraded areas of the city something, also aged and forgotten “, as stated by the organization.During the 15 days of the residency, all the community had the possibility to see ADD FUEL, BORDALO II, MR.DHEO, TAMARA ALVES and ±MAISMENOS± working in the historical center of Covilhã, appropriating, under their own styles, some walls or producing pieces in the studio, for the collective show, that will be presented this Friday in Lisbon, at LXFactory. But also, all the interested, had the chance to participate in all parallel activities that included guided tours (we had more than 125 people attending the 5 tours programmed), the screenplay of: Cidade Cinza (2013, Brazil), BCN: Rise & Fall (2014, Spain) that will be presented this month in Barcelona and Magic Pantónio (2015, France), that will be launch just next year; the programmed talks, were each artist presented himself and the ones of the presentation of our project LATA 65 (in english Can 65) – urban art workshop for seniors, with the special presence of Luísa Cortesão, the lady that made the workshop 2 years ago and stills painting in the streets of Lisbon. About the pieces made: 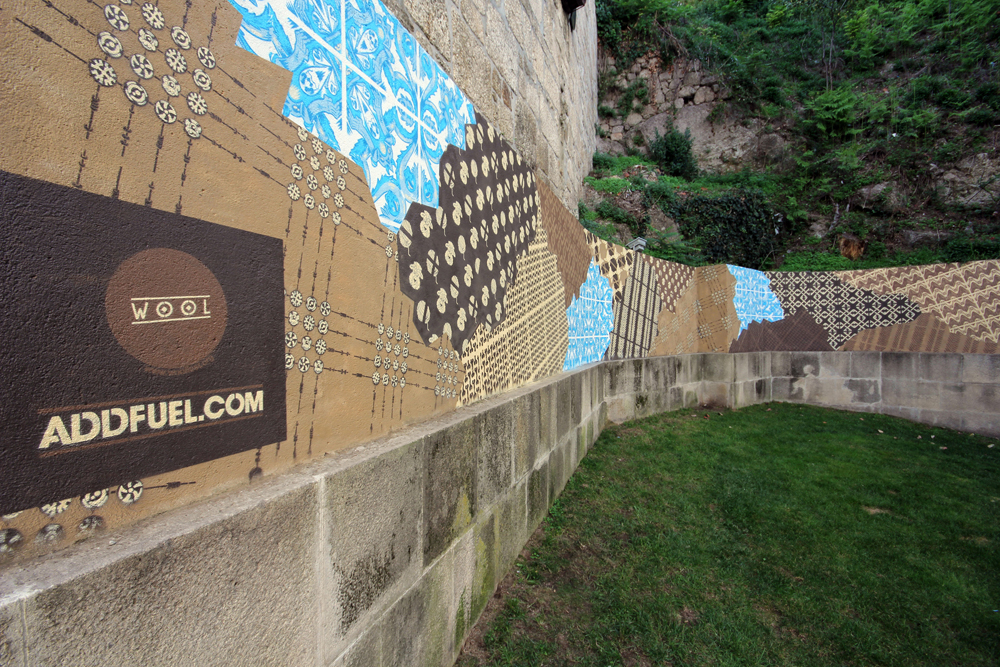 ADD FUEL, whose work lies in the reinterpretation and reinvention of the typical Portuguese tiles ‘AZULEJO’, joined ‘his tradition’ with the reinterpretation of local ‘debuxos’ (no translation),  which are the drawings (plans) that subsequently entered the looms, generating the tissues. These are typical local tissues, which can be easily seen, reinterpreted in the wall in shades of brown and pastel, mixed with its typical tile patterns in blue. Title of the piece: Oddments 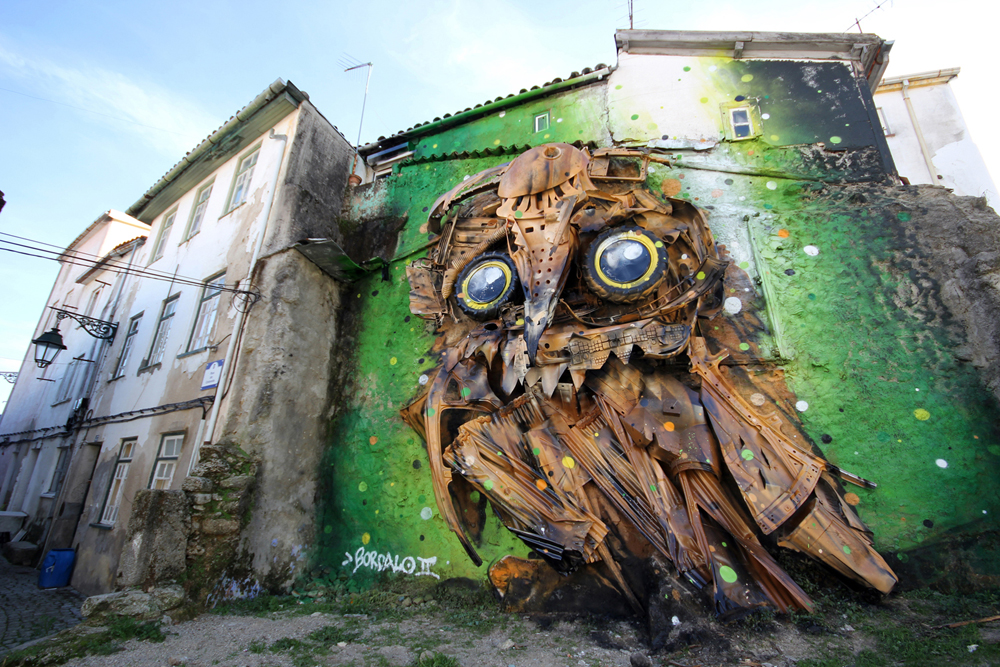 BORDALO II was the great attraction of the historical center of Covilhã, building during days an apparent jumble of garbage and junk, that everyone would see becoming a huge owl, which is a symbol of wisdom and culture, calling for investing in that historical and central area of city. Title: Owl eyes 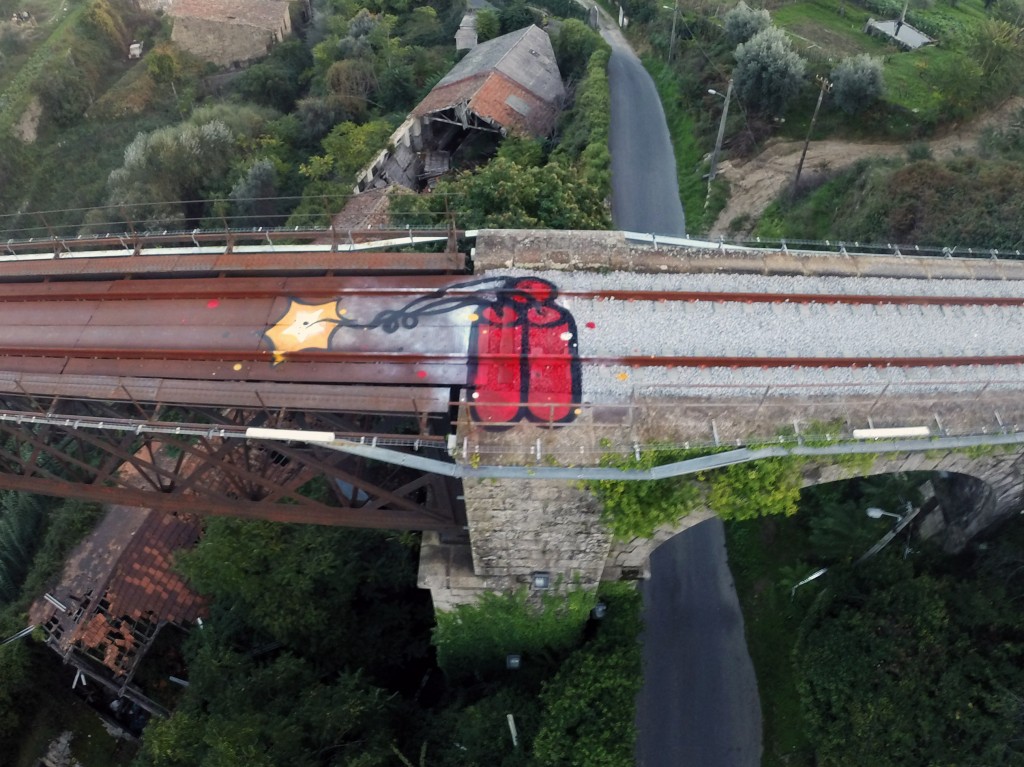 This artist would eventually perform other interventions in the city, among them , the big warning on the “disinvestment that was done on public transport, particularly in the inland rail network, further isolating, areas already quite depressed”. Title: T.E.R.R.O.R.I.S.T 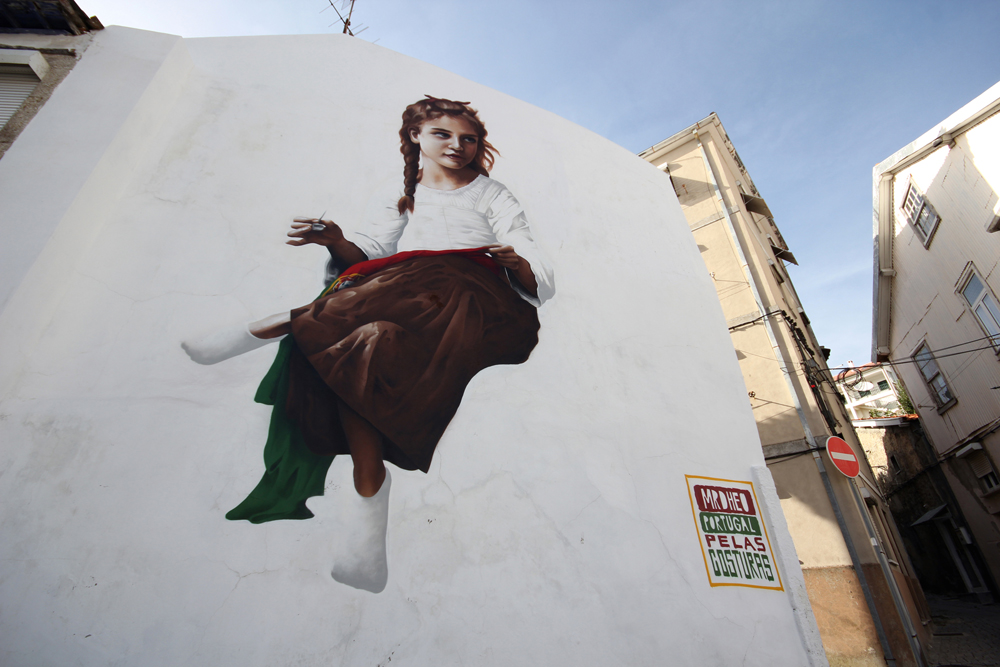 MR. DHEO, left gable of a huge highlighted in the historic center, its reinterpretation of a classic French painting, a young woman sewing a cloth, which the artist changed for the Portuguese flag. A tribute to local seamstresses and ‘cerzideiras’ and simultaneously, a message about the current state of the the country.  Title: Portugal pelas costuras (traslation – Portugal seams) 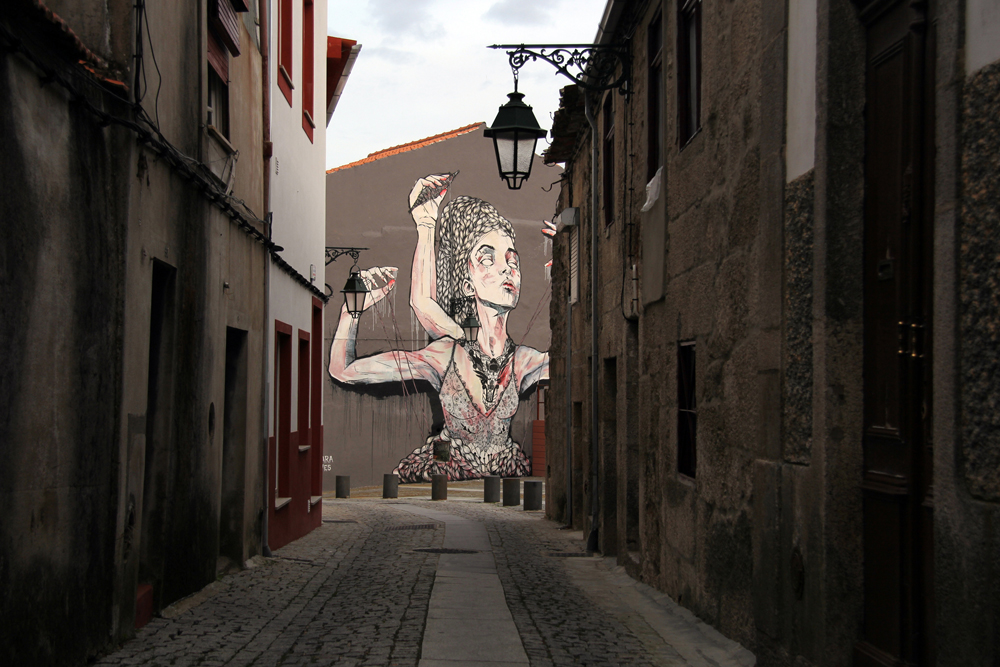 TAMARA ALVES, after discovering the city of Covilhã, their traditions and customs, decided to make on her wall, an ode and simultaneously, an alert to the slow death of an entire secular heritage, specifically, the work of bobbin lace. Assumesher mural, as a sign of death and rebirth of this art, depicting a female figure who embroiders her own dress. “… To create out of his own imagination the beauty of their wild ancestors … a mythology that it can not inherit” is the excerpt that inspired the mural, taken from a poem by Allen Ginsberg, who read the artist during his residence in Covilhã. Title: Wild orphan

± MAISMENOS ± was the surprise artist of WOOL ON RESIDENCE, arrived in the city only in the 2nd week of residency, but a quick city tour, was enough to arouse her talent and inspiration to perform numerous interventions, always surgical and current, sending messages to/ or questioning the political, social and economic, national and/or local actuality. 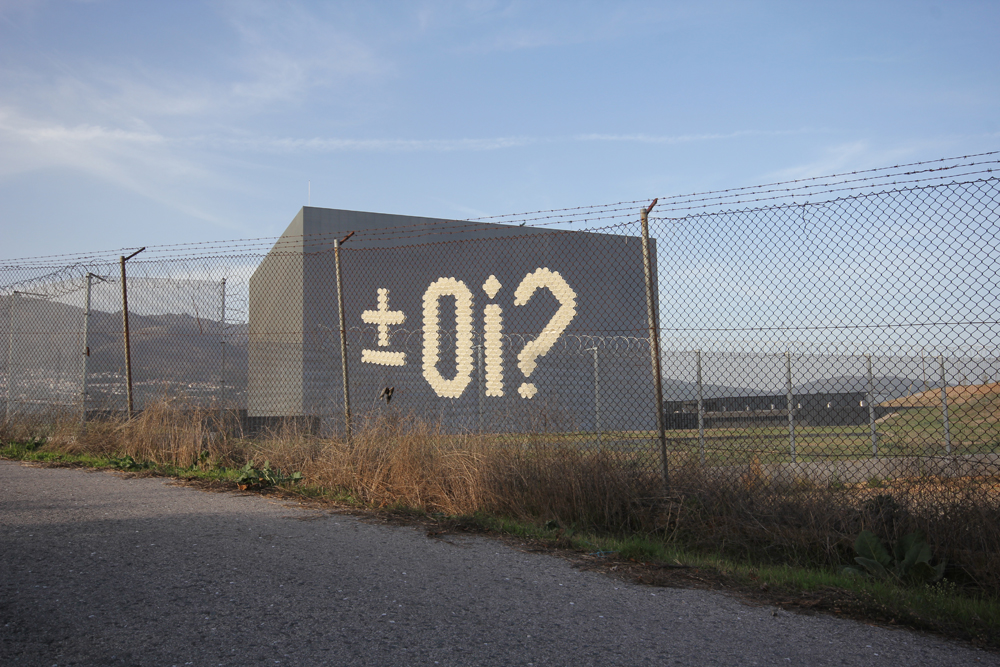 intervention 01 _ ±Oi?± His 1st piece was made precisely on the day that PT (the portuguese company of telecommunications), previously sold to OI (the brazilian company of telecommunications), experienced a historic drop in the portuguese stock market. The building you have behind the piece is the PT Data Center, located in Covilhã. The expression ‘oi’ means ‘hello’ in brazilian. 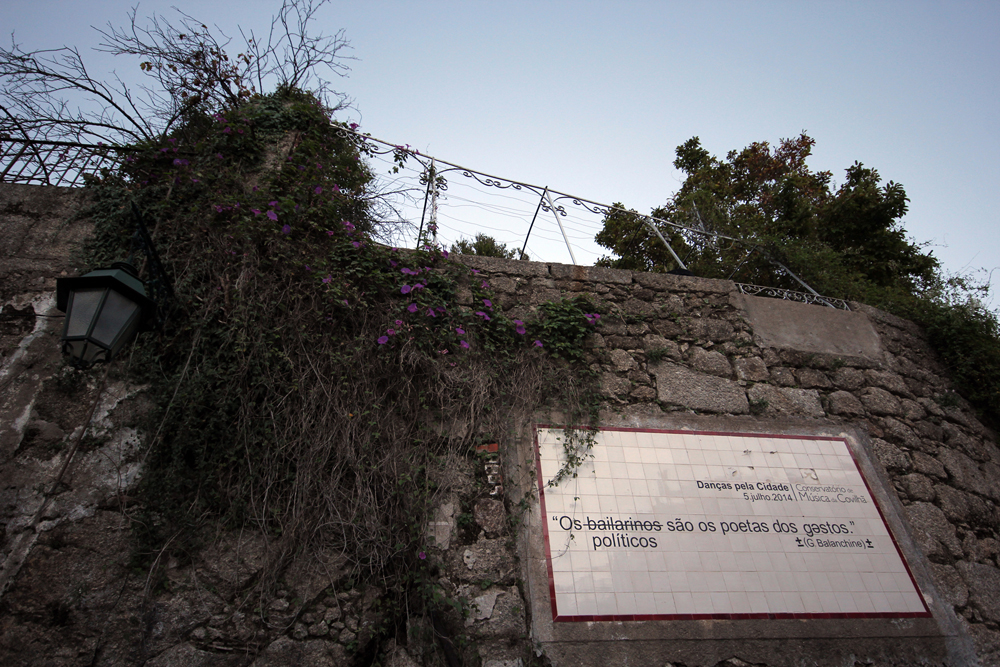 intervention 02 _ ±GASTOS± When walking in the streets of the historical center of Covilhã, the artist saw this inscription on the wall, from a past dance event. Once again, with few surgical intervention, he changed all the meaning of the phrase, from ‘The dancers are the poets of gestures’ to ‘The politicians are the poets of spending’. 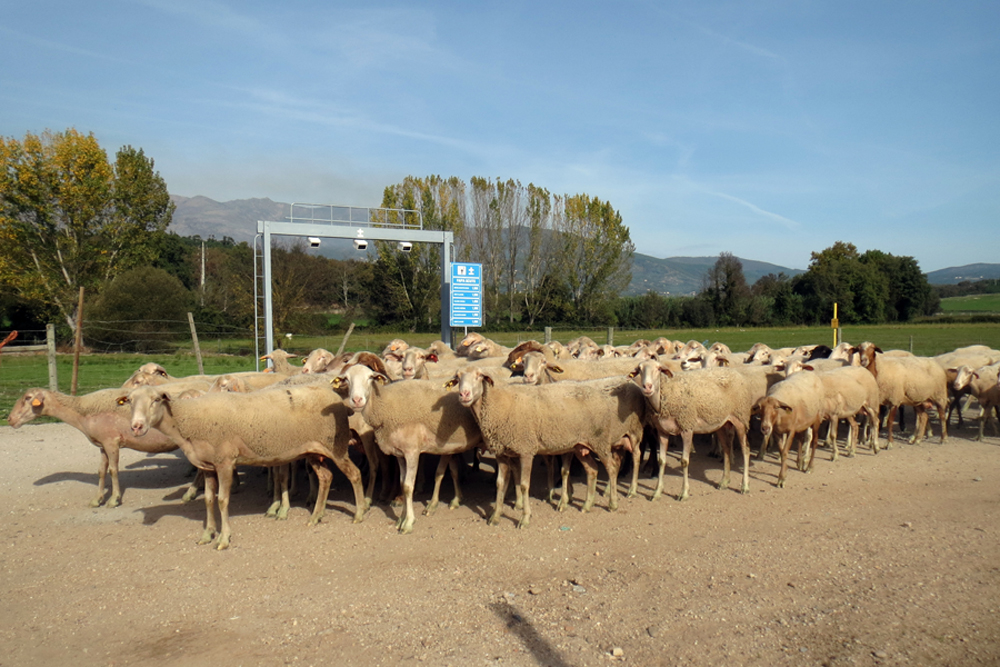 intervention 03 _ ±PAPA $SCUTS± Covilhã is located in the profund interior of the country. Som eyears ago, the portuguese government build a system of roads in these areas to improve the accessibility to these regions of the interior. In 2012, the SCUTS (sem custos para os utilizadores, meaning in english, ‘no costs to users) started to be payed, dramatically changing access and growth in these regions. ±MAISMENOS±, to come to the city of Covilhã, from Oporto, payed 15 euros, a length of 1 meter receipts.intervention 04 _ ±COVILhã± ±MAISMENOS± used the name of the city and a small wall with some grids on it, to create a political and economical message, translating the name of the mural to english: ‘lair of the white gloves’. 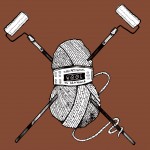 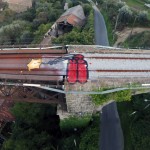 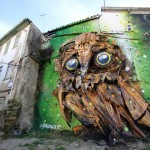 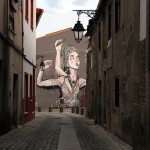 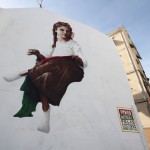 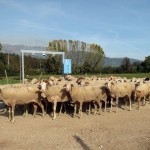 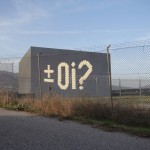 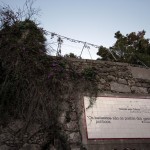 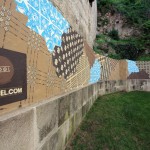