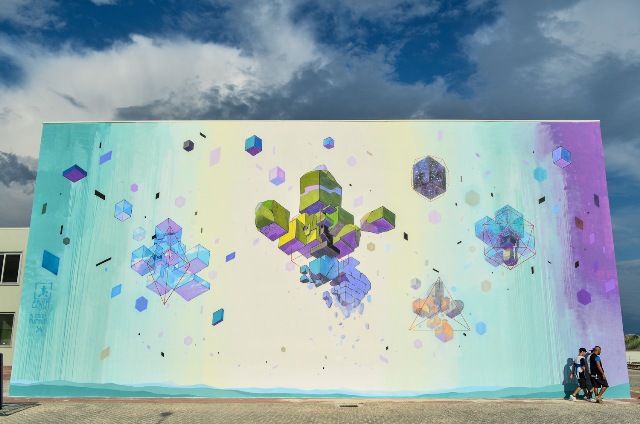 From September 6 to 10, the Italian-Swedish artist “Etnik” worked to his latest mural on a 10 meters high by 20 meters long wall, at the New Headquarters of the “Sandro Penna” school, in the neighborhood of Taverna delle Rose in Battipaglia, Province of Salerno, Southern Italy. 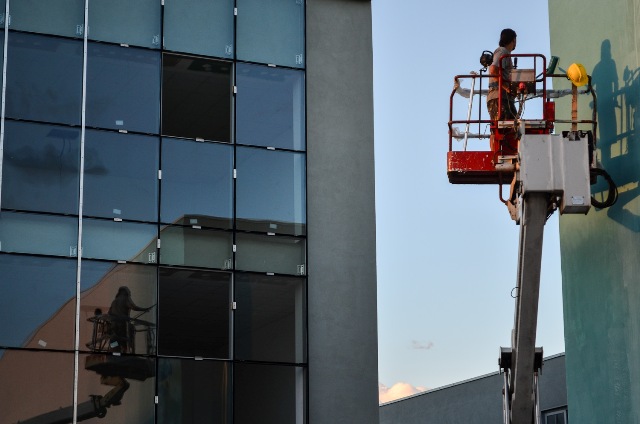 The mural intervention was entitled by the artist “5 Platonic Solids“, and it has been organized and curated by the nonprofit association “a.DNA”, already active from 2010 in Rome and in the Province of Salerno with “URBAN AREA” project, which has so far involved several international artists (Italians, foreigns and locals), for as many murals in the towns of Rome, Battipaglia and Campagna. 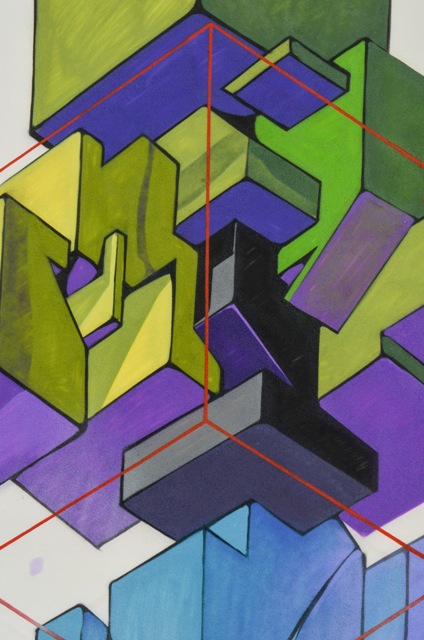 The a.DNA association go on with the “URBAN AREA” project with a new site specific mural intervention of Italian-Swedish artist Etnik. 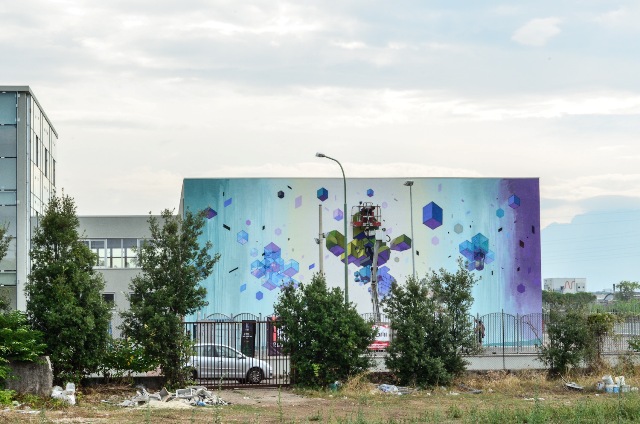 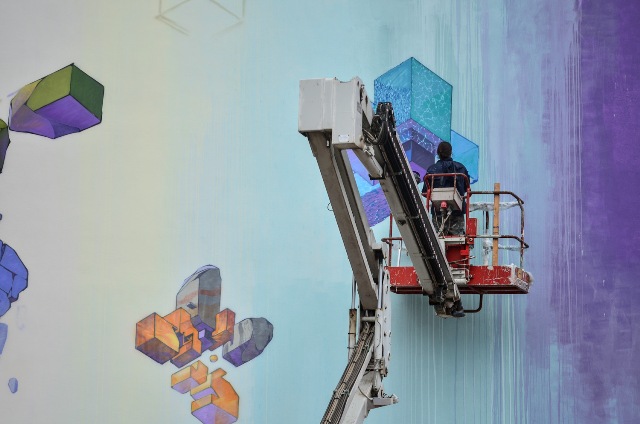 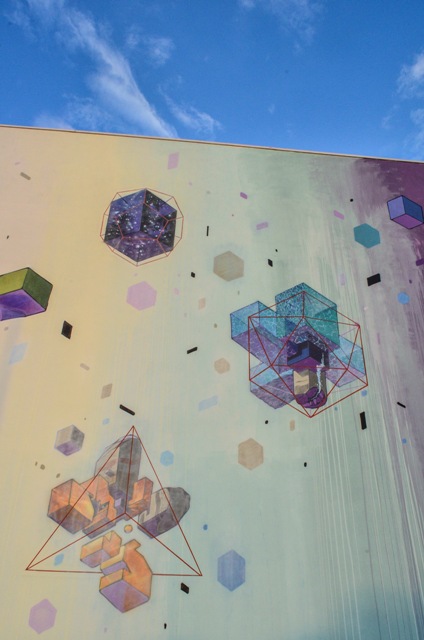 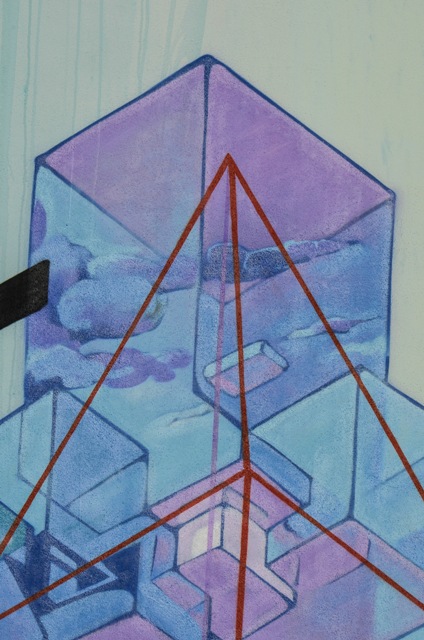 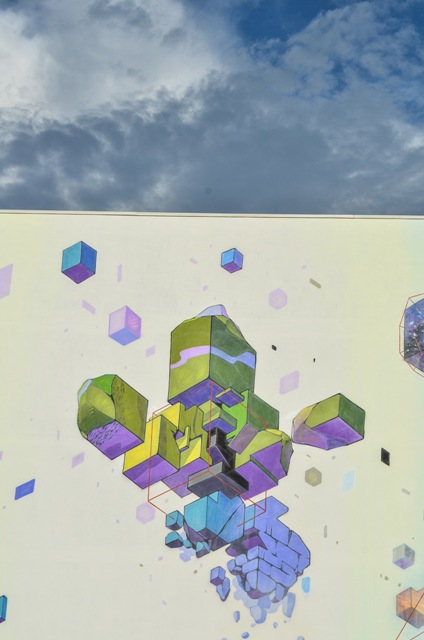 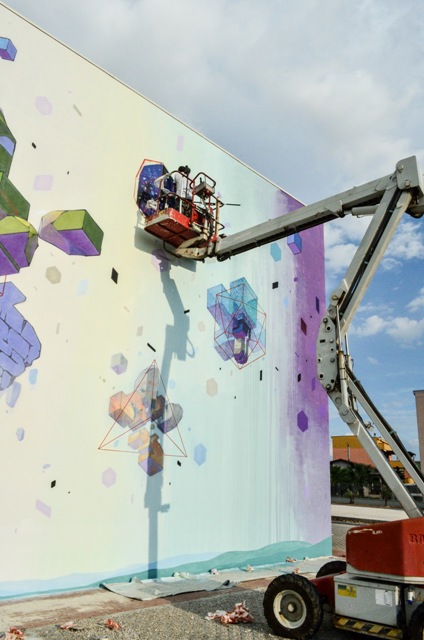 The mural was made in less than four days of work, and painted on an outside wall of a new construction building, which from 2017 will host the students and faculty of the School Institute “Sandro Penna” in Battipaglia.
The particularity of this artistic intervention is being that it was planned already in the architectural design of the structure, before the works started in 2014 on a land confiscated from organized crime in Taverna district, a suburb south area of Battipaglia in the province of Salerno (Southern Italy). 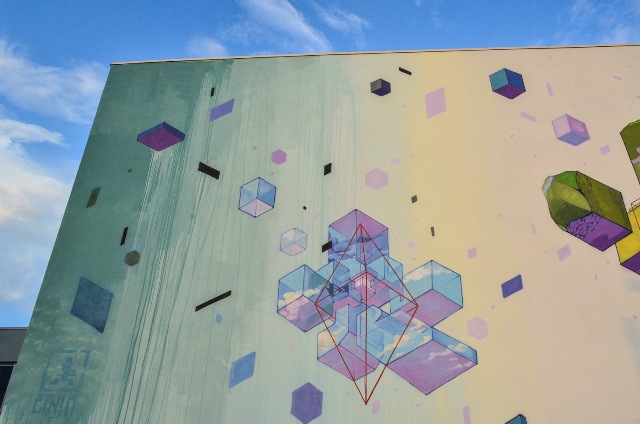 In this case Etnik represented the “five elements”: earth at the center of the wall, the air on the left, the fire and the water on the right and the ether at the top in the center. Each of the five elements is associated to Platone’s solids: the tetrahedron for the fire, the octahedron for the air, the icosahedron to water, the cube for the land and the dodecahedron to the ether. Specifically Etnik worked experimenting with a new type of overlapping figures, intersecting three-dimensional lines of the five Platonic solids with his typical geometric adaptations of natural and urban elements. 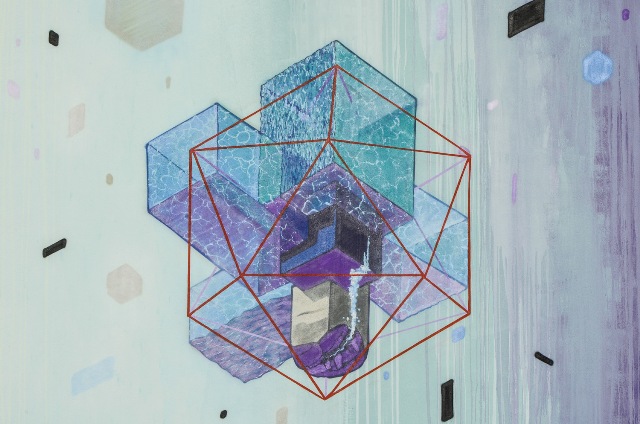 Inviting Etnik, artist who was trained during the 90s in the writing scene and still makes his works as a combination of contemporary wall art and post-graffiti, a.DNA look indeed a point of contact between a form of art that moves mainly in the illegality and the contemporary muralism that today has become the most widely used and accepted “public art” by the institutions.

Check out the video:

– the City of Battipaglia : www.comune.battipaglia.sa.it