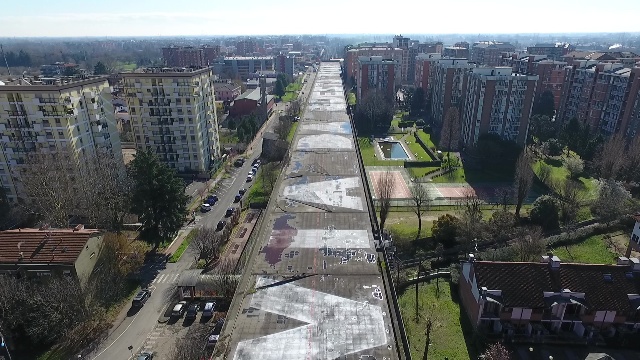 After about a year since the presentation of “Viavai” to the public, the work, the largest poem in the world created in San Donato Milanese by the Italian artist MisterCaos, is back in the news. In fact, the work has been selected among the finalists of Arte Laguna Prize 15, the prestigious contemporary art prize of the Lagoon of Venice, which since 2006 has been open to multiple disciplines – visual, performing, multimedia, landscape and digital arts – and was created to give talented artists, more or less young, the opportunity to emerge, to exhibit to the general public and to confront a jury composed of important names in the contemporary art scene, as well as among the artists themselves from all over the world. 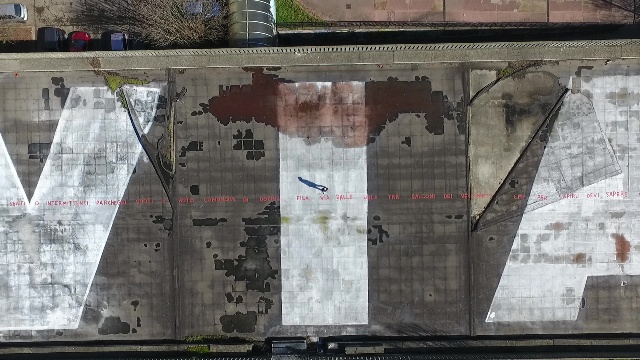 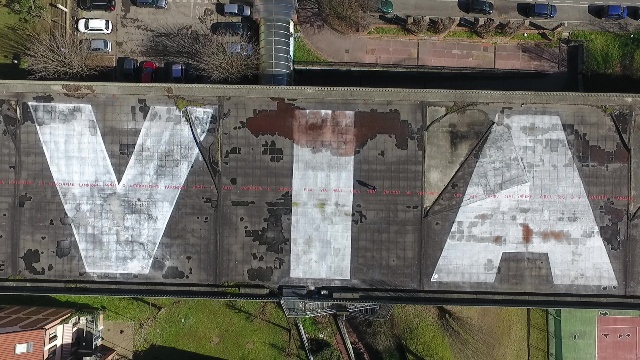 “ViaVai” is exhibited in the evocative setting of the North Arsenal of Venice, from October 2 to November 21, 2021 , together with artists recognized in the international scene of the caliber of: Boa Mistura (Spain), DMAV (Italy), Kamal Shosha (Egypt) and Villares Rafael (Cuba), while in previous editions Alberonero and Borondo, among others, have been exhibited. 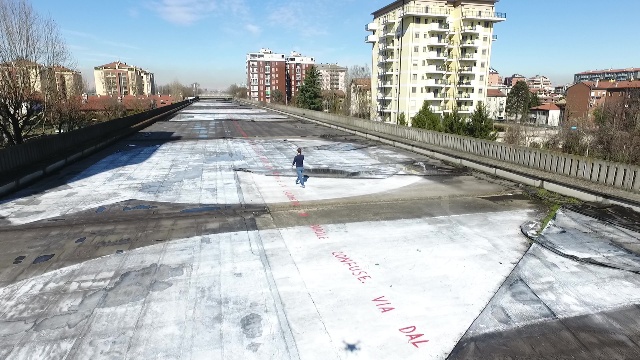 45°24’24.6 “N 9°16’02.3 “E is a work of street poetry.
It is the largest poem in the world and is located in San Donato Milanese, more precisely on the roof of a soundproof barrier that divides Via Di Vittorio from the rest of the city. Composed of various elements, the work is layered on different keys of interpretation. The graphic-literary part contains a very long red poem, entitled “Viavai”, which intertwines a huge white writing that reads “Vai via viai da questo viavai” (Go away from this bustle). 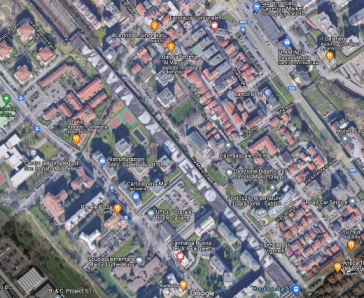 Viavai” implicitly refers to Via Di Vittorio, the place where MisterCaos was born and raised, and to which he dedicated this work.

ARTWORK CONCEPT
45°24’24.6”N 9°16’02.3”E (also known as Viavai) is a site-specific conceptual and visual artwork, a crossover of street poetry, street art and land art. It is the biggest poem ever published on a street in the world, measuring a 11248 m2 surface.
The artwork lays on the roof of a Sound barrier curtain measuring 600 m of length, 30 m of width and 10 m of height. Due to its location and enormous size it can only be accessed through satellite pictures, drone videos or partly seen from the windows of the surrounding buildings.
The choice of writing a massive poem under such inaccessible condition comes from the urgency of provoking a shock speaking about the area in order to raise consciousness about its problems and status.
The artwork is meant to be a symbolic gift that the artist Mister Caos dedicates to its neighbourhood crossing over different languages and layers of fruition.
Moreover, it aims to set a dialogue with people and inhabitants of the area, questioning the issue of borders, barriers, and suggesting the chance of a reconstruction of a possible meaning.