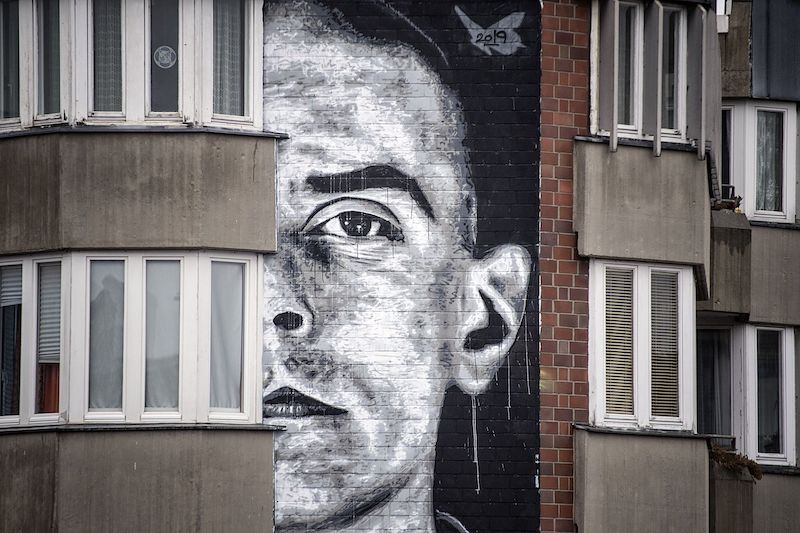 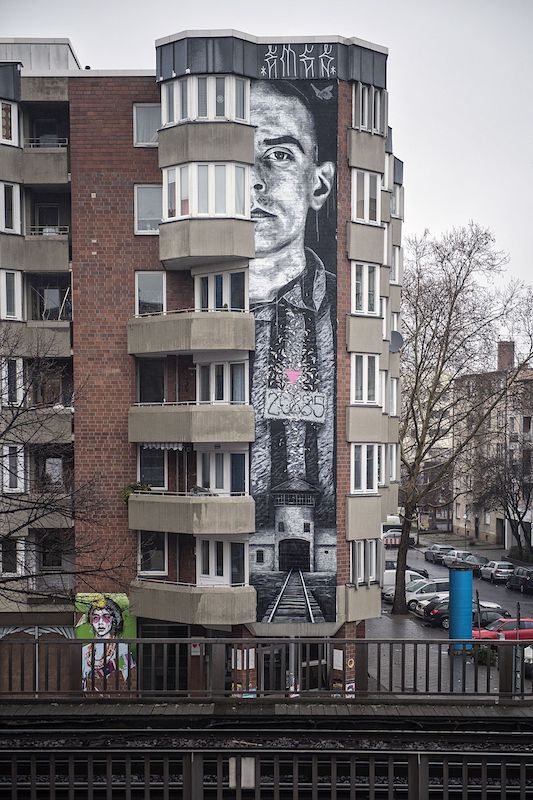 The museum director Yasha Young and the artist Nils Westergard have developed a new “One Wall” concept together for the URBAN NATION MUSEUM FOR URBAN CONTEMPORARY ART.
Thanks to the assistance from the “Faces of Auschwitz” project, they found reports – converted into works of art – that warn and remind us.

The first edition of the memorial wall at Bülowstrasse 94 shows Walter Degen. The former locksmith was deported as a German political prisoner at the age of 32 for being a homosexual and was registered at the Auschwitz concentration camp on 29 August 1941. Homosexual acts between men were considered a crime during the Nazi period in accordance with §175 of the criminal code because it was a “threat to the morals and purity of the German race”. Those convicted were marginalised as “asocial parasites” and labelled with a pink triangle. In May 1942, Walter
Berlin, 17 January 2019 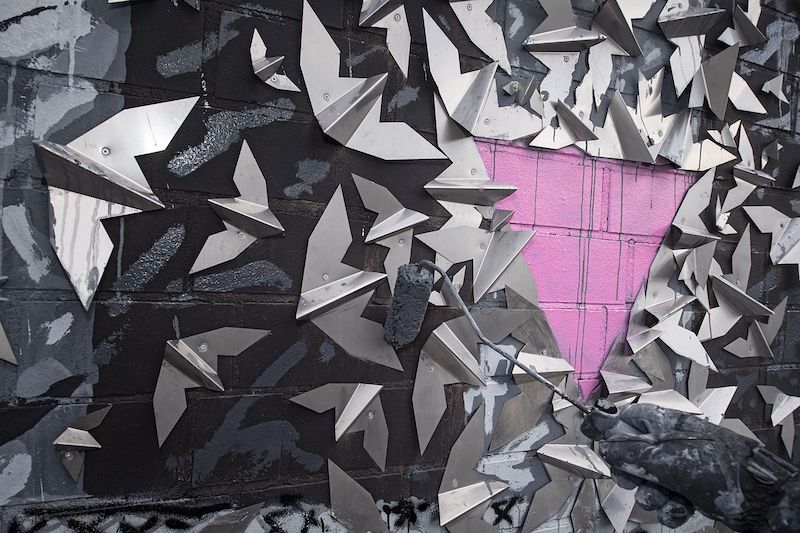 Degen was transferred to the Mauthausen concentration camp. It is not known if he survived or not.
Nils Westergard has now recorded this moving story in an impressive piece of art. The view or rather the eye of the Walter Degen portrait captures its beholder from every perspective.

The depiction of the Auschwitz concentration camp gate, which Westergard added to his composition, is just as haunting. This wall now appears charged with emotion and full of rage. Those interested are invited to take a moment to take in this memorial wall. The initial work of art comes from Mademoiselle Maurice, who designed this memorial wall in her very unique style, yet still following the central idea, for the first time during the summer of 2017.
She laid the foundations for this memorial wall with over 200 metal origami birds, which formed a triangle in the centre.

Artist Nils Westergard in front of his completed mural. 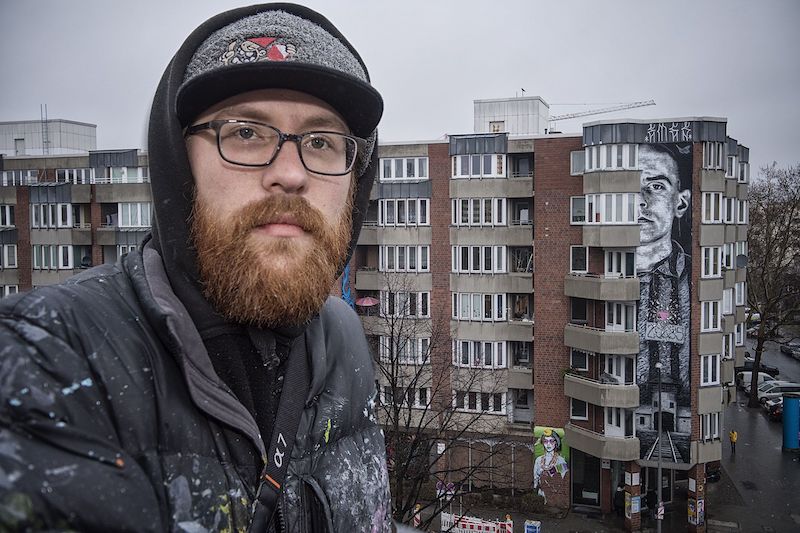 About Nils Westergard:
Nils Westergard is a Belgo-American street artist and filmmaker from Richmond, Virginia. He started with stencils and graffitti during his teenage years. In the following years, he developed a unique style, which he used to create murals around the world. His works investigate themes such as intimacy, strength and vulnerability. Westergard made the portrait of the Auschwitz detainee Walter Degen as a freehand work.

About “The Unforgotten”
The wall of the building at Bülowstrasse 94 follows a very special central idea: it is a memorial wall for the victims of the Nazi regime, who were persecuted, kidnapped, imprisoned and murdered for being homosexual. This memorial wall in the LGBTQI friendly neighbourhood of Berlin-Schöneberg will continually transform over time and thus warn and remind people. Different international artists will leave their mark there in future. The link between art and political action in the public sphere – also known as “artivism” – captures this historically relevant theme in order to create a collective memory. 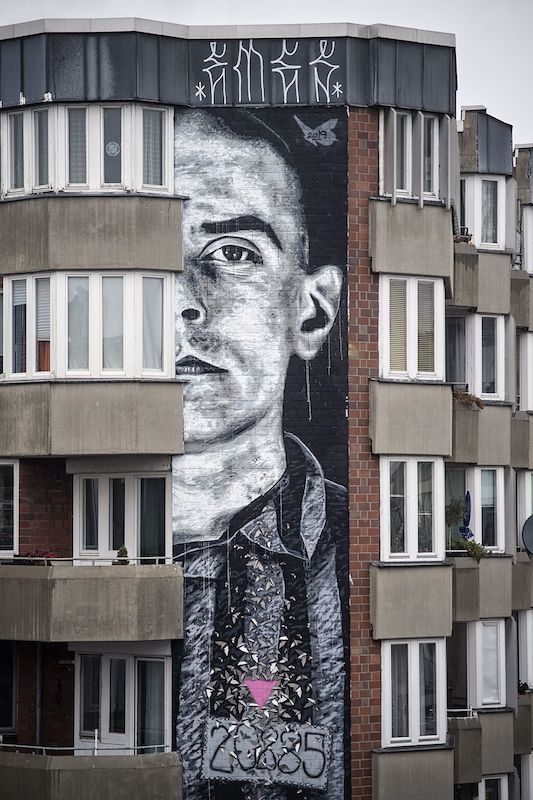 About the “One Wall” project series
Under the motto “One Wall – One Message”, internationally recognised and aspiring artists design the facades of a building in public spaces in Berlin. “One Wall” was initiated by the URBAN NATION MUSEUM, which under the artistic direction of Yasha Young regularly invites greats from the national and international street art scenes to Berlin. This is how the face of the city is changed in the long term through urban art. Every “One Wall” conveys an artistic position: the artists engage with the surroundings and subsequently design an individual piece of work. 27 One Walls from internationally recognised artists like Onur & Wes21 (Switzerland), Don John (Denmark), Shepard Fairey (USA), HERAKUT (Germany), Phlegm (Great Britain), Li Hill (Canada) and Pixel Pancho (Italy) have already been completed.
You can get more information about “Faces of Auschwitz” at: https://facesofauschwitz.com/