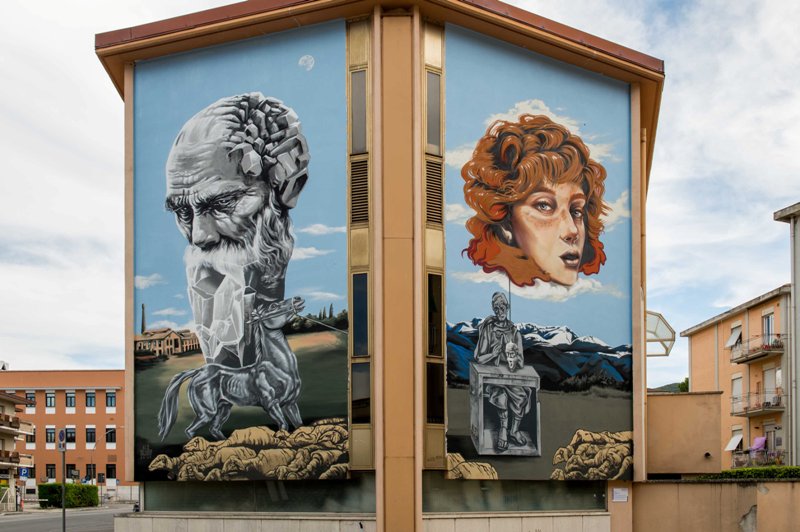 Αrtists, Neve, Sbagliato and Ale Senso have just realized three works of urban art that exalt contemporaneity while embracing the past, in Rieti.

Under the aegis of TraMe, a project curated by Annalisa Ferraro, works of urban art by Neve, Sbagliato and Ale Senso that exalt contemporaneity while embracing the past are now embellishing the walls of the city of Rieti. The project, ideated by The Uncommon Factory, is supported by the Lazio Region and the European Regional Development Fund.

The leitmotif of these works is in fact their allusion to the city’s ancient and greatly treasured murals, which over time have become a point of reference for the community, and those traces of the past that the people of Rieti, collaborating with experts, have worked to preserve and hand down to future generations. 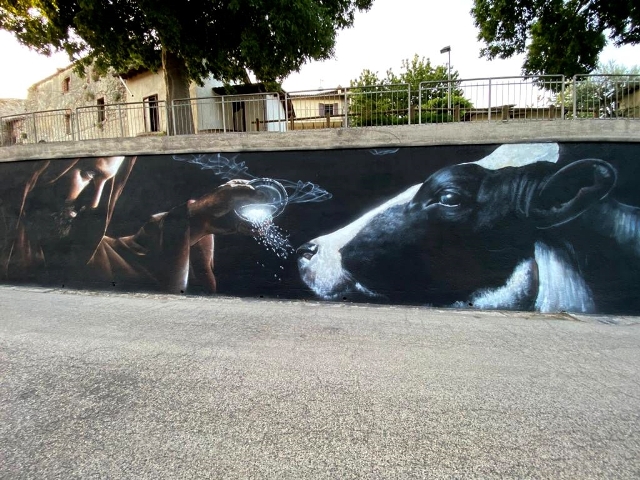 Neve, one of the best-known exponents of Italian neo-muralism and famous for his figurative art, has created one of his hyper-realistic portraits for Rieti, painted in his characteristic chiaroscuro style that brings to mind the works of Caravaggio. The mural is painted on a wall of almost 50 m in the ancient quarter of Sant’Elia. This is an important milestone on the Cammino Francescano (the Franciscan pilgrimage from Sant’Antonio di Montepaolo to Assisi), where the fresco representing Saint Francis composing his Rule and the miracle of the “Healing of the oxen of Sant’Elia” is conserved. The artist, identifying totally with the historical context, has created an extremely evocative work that is unique in its representation and immediately comprehensible to those who walk along this road with its religious connotations. An artist of our times, characterized by immense sensitivity and the emotional strength that pervades his works, Neve has dedicated a mural to the city of Rieti that more than holds its own with the art of the XVII century, but is unmistakably a contemporary work that transmits the anguish, fears and hopes of our times. 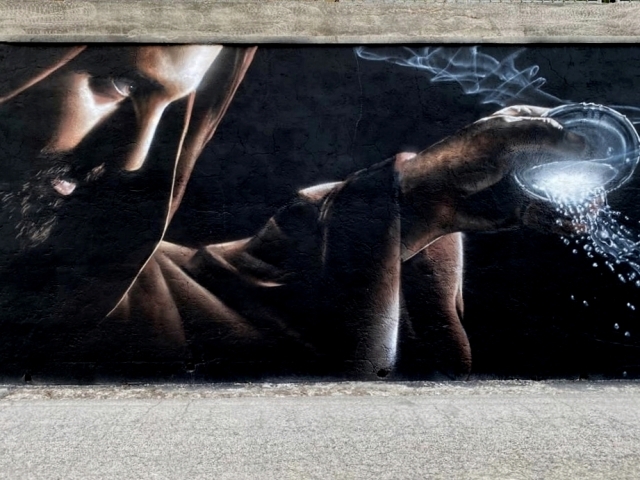 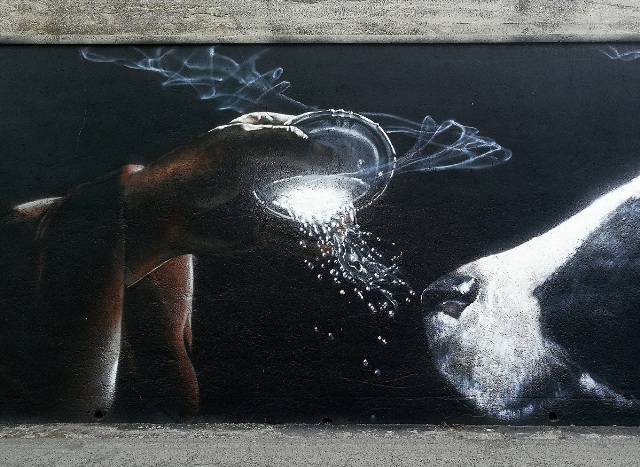 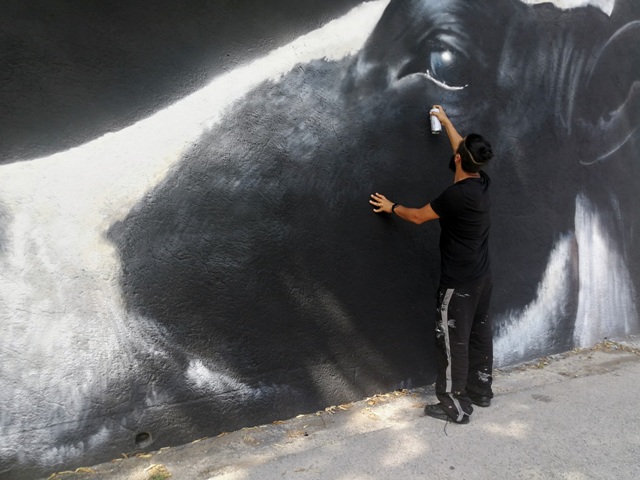 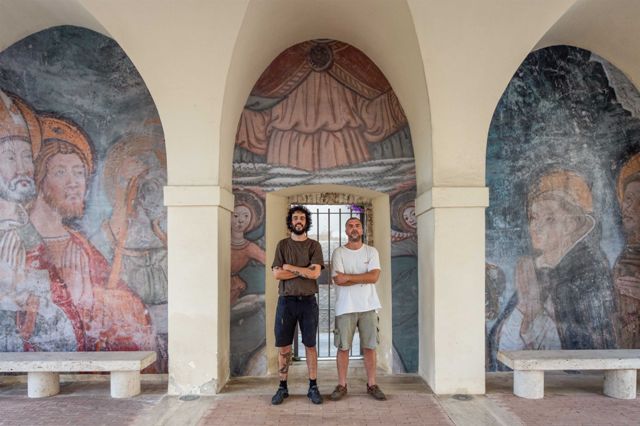 The Museo Civico in Via Sant’Anna is the location chosen for the contribution of Sbagliato, a collective of Roman artists who obliterate the frontier between reality and illusion with a skillful use of semi-permanent posters. The group individuated a detail of the mural by Domenico Papa conserved in the Church of San Domenico, La madonna protegge i fedeli dagli strali della peste (1482-1484), integrating it into the context of the Civic Museum under the evocative rib-vaulted portico of the former Convent of Santa Lucia. Using an enlargement of photographic samples of the original, Sbagliato has captured the drama and rigor of prayer. 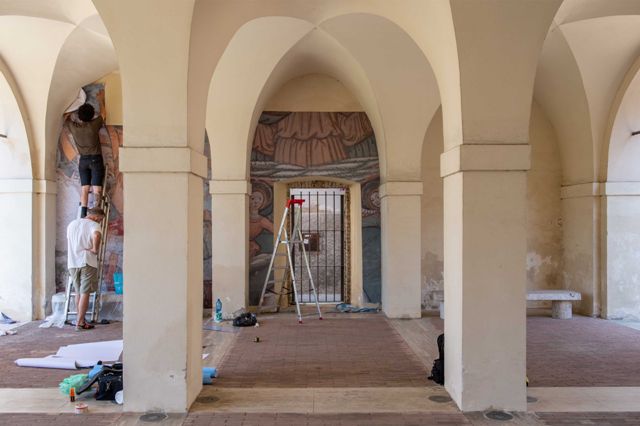 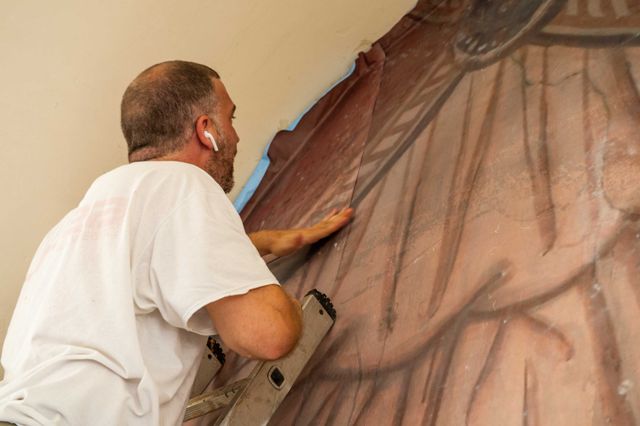 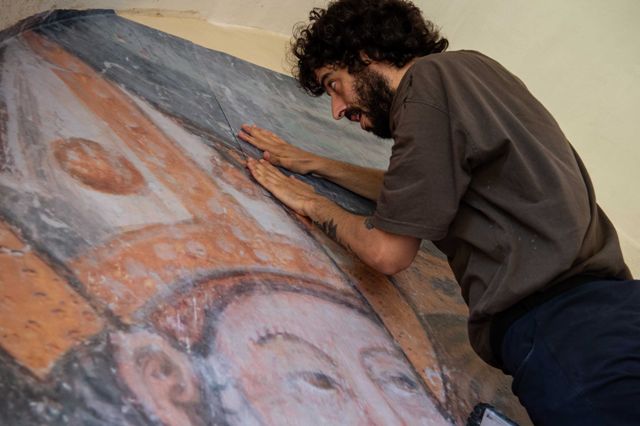 The protagonists, the Madonna of Misericordia and the stern representation of God, are simply evoked in this work through the devotion and sacredness of the supplications of the angels and the saints. An artful chromatic touch, and the poster seems to be perfectly absorbed into the surface of the walls; a moment of history comes back to life and miraculously, two hundred years after the foundation of the building, Domenico Papa returns to paints a fresco on one of the walls, giving the city and its inhabitants another work of art for the present and the future. 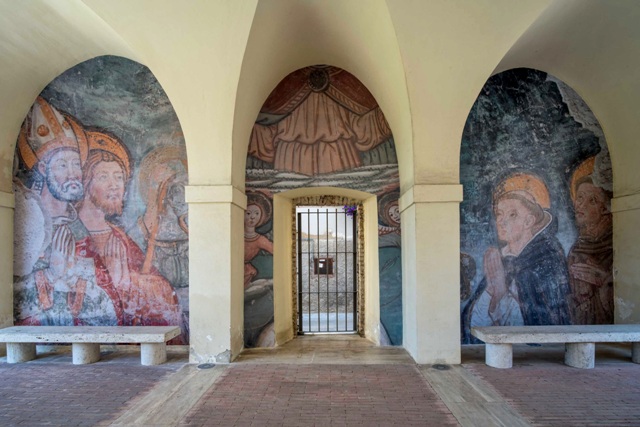 And then Rieti meets Ale Senso. An artist who works on anthropomorphic representations of emotion, she is attracted by circumstances and events affecting the individual and the community, that she then elaborates into symbolic and oneiric images. 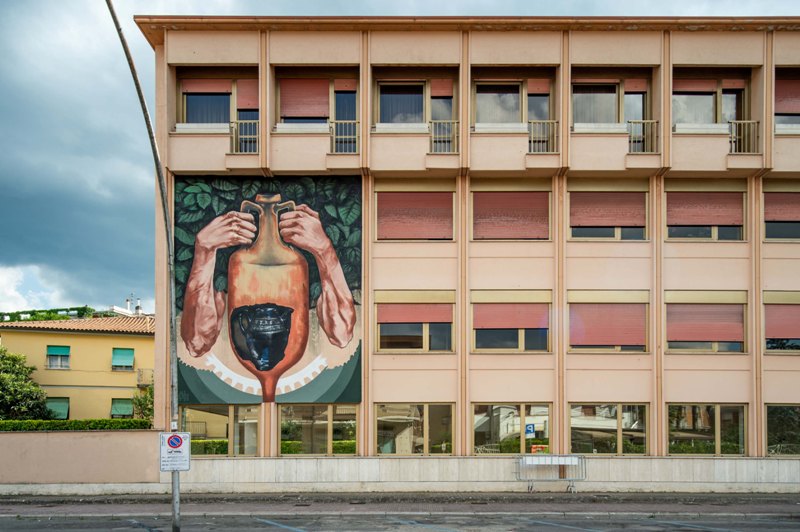 Ale Senso took on the façade of the Camera di Commercio after exploring the cultural panorama of the city, and synthesizing the area’s historic-artistic references and the artifacts in the Archeological section of the Civic Museum. An amphora from Roman times is broken to reveal in its interior a tiny amphora of the Sabine culture, embracing in a relationship of dependence and cultural intercourse. The former was born on the shoulders of the latter, much older and more solid. The two amphoras are surrounded by luxuriant foliage, representing the genuine naturalistic heritage of the countryside around Rieti and its importance for agriculture and tourism. These amphorae are vessels for the transportation of foodstuffs and their base appears to rest on an inverted depiction of the city bridge, at one time the principal route for commerce, but which here doubles as part of a gear wheel, the symbol of industry that is now the fulcrum of the local economy. The history and the culture of the city, represented by the amphorae, are supported by the strong hands and arms of the laborers of the area. 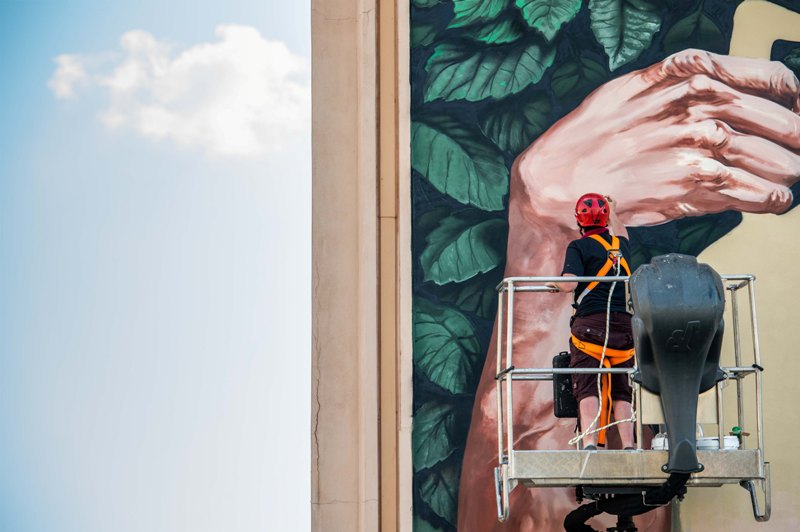 On the lateral façades of the Camera di Commercio, Ale Senso illustrates a story that has its origins in the past but lives on in the present. On one side, the visage of an old man tells of the industrial history of the city, the memories of the community of laborers take form in the distant outline of Italy’s first sugar refinery. 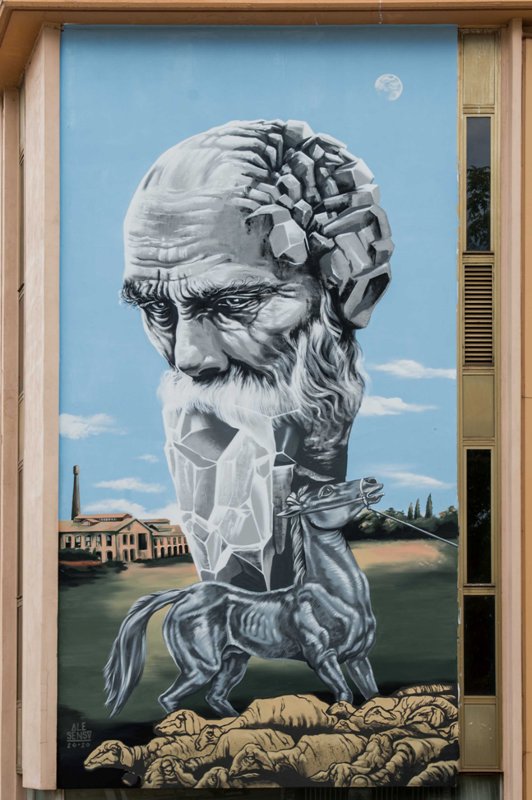 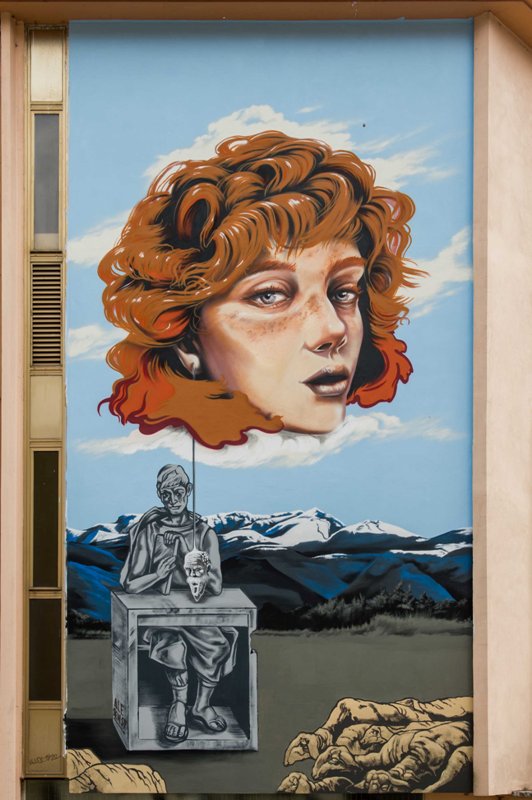 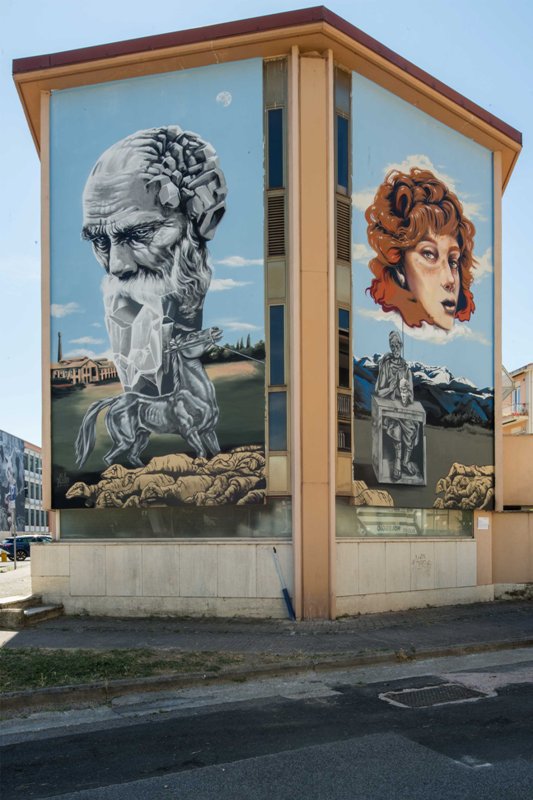 The fiery horse expresses the force of resistance and the mettle of the workers who understood the importance of their contribution to the growth of the city. On the other side, the face of a young person with a pendulum hanging from one ear looks fearlessly toward the future, instilling the student bent over his books with the desire for knowledge, guiding him in the search for a balance between conserving tradition and an impatient thrust toward innovation. In this mural by Ale Senso, inspired by the works of Antonino Calcagnadoro and Arduino Angelucci, past and future are eternally bound together by the flock of sheep parading across both façades in front of the horse and the student, representing the connection of the historical-artistic tradition of Rieti and its hinterland with the new languages of our times. 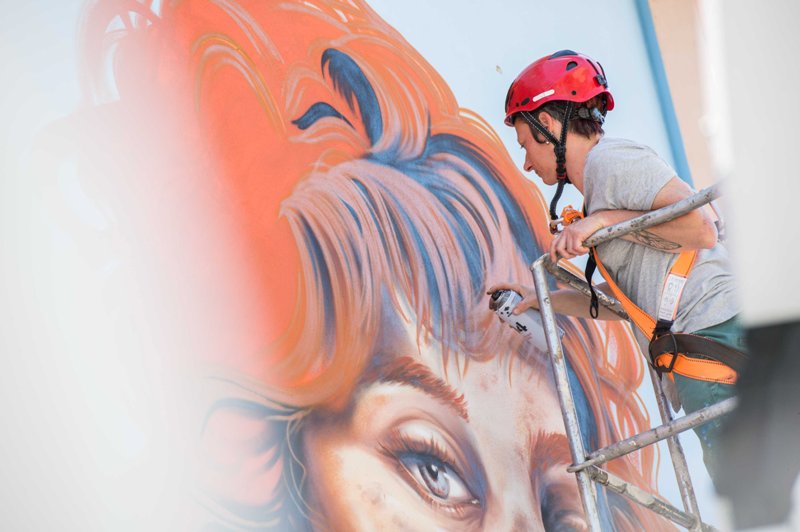 The project Linguaggi contemporanei tra affreschi e street art is now complete. With the works of art by Neve, Sbagliato and Ale Senso, and the related series of seminars, Trame has achieved its objectives: provide the city with a new artistic and contemporary heritage that lives in the present while being inseparably bound to its past and its rich historical-artistic tradition, cultivate dialogue with the community and stimulate the creation of synergies between the day-to-day life in Rieti and external players involved in cultural activities.
www.tra-me.org/

The artists: biographies
Neve
Considered to be one of the best-known exponents of Italian neo-muralism, Neve started painting on walls in Turin in 1995. His passion for aesthetics and classicism led him to combine urban and academic art using a distinctive figurative style.
Neve has painted walls of titanic dimensions with hyper-realistic images in freehand throughout Europe. His works, using different languages and various techniques, are on display worldwide. Now, with hands that are almost always smeared with paint, he never misses a chance to leave his mark and develop his style.

Sbagliato
Sbagliato is an artistic project founded by three Roman architects and designers in 2011 to generate interference in the urban reality, opening up spaces in the rigid order imposed by architecture. They have achieved this by using posters as a medium. Being ephemeral and mimetic, posters are an ideal form of communication to express the distinctive characteristics of poetic harmony of the group. Sbagliato’s visionary installations are the outcome of a synergy between architecture, graphics, photography and collage, through which the architectonic elements can be “sampled”, processed and re-integrated into an urban context, heterogeneously but by no means randomly. In recent years Sbagliato has participated in numerous Public Art exhibitions and created installations in various countries.

Ale Senso
Alessandra “Senso” Odoni graduated from the prestigious Accademia di Brera in Milan. Her artistic development, linked to graffiti and street art, began in the second half of the 1990s. In 2007 she started the Derelict Building project, using pictorial images and performance to transform derelict buildings into spaces in which to express art forms.
Her studio is in Berlin, and here she developed Apartment A, in which eight murals transform a tiny apartment into a cultural pole. She delves into human emotions metaphorically and metamorphically, investigating humans as a free-standing individuals and their relationships with the social and natural environment. She is currently focusing on the influence of technology on multiple aspects of existence, from social to sexuality.