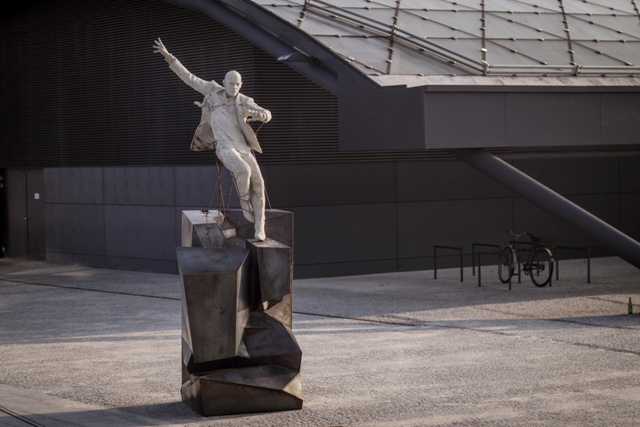 “Wrong weight” is the sixth realisation as part of UNIQA Art Łódź project, organised by Łódź Events Centre and sponsored by UNIQA. This time, it is a four-meter high sculpture by two Warsaw-based artists – Tomasz Górnicki and Chazme. A total of 9 Polish and US artists have created a total of 11 works in urban spaces of Łódź since July 2016. 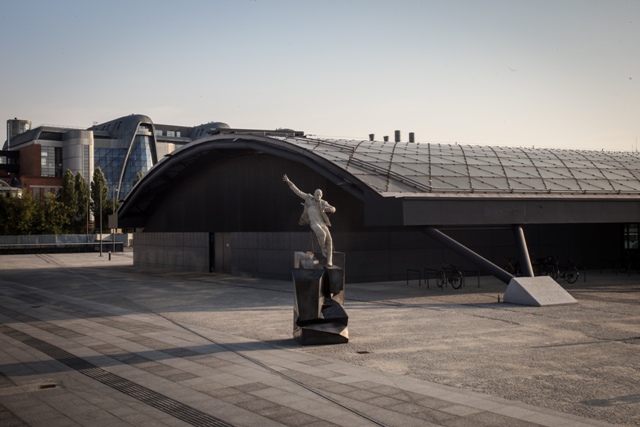 Tomasz Górnicki‘s and Chazme‘s sculpture has been positioned to the north of the recently revamped Łódź Fabryczna station, at Rodziny Poznańskich Avenue. It comprises metal, concrete and acrylic elements.

Michał Bieżyński, Arts Director of UNIQA Art Łódź Project, Łódzkie Centrum Wydarzeń:
It’s taken us quite long to find an appropriate location. We wanted the place not to be accidental, to be proper in more than one way. We concluded the modern development of Łódź Fabryczna station would offer the most adequate architecture and facilities from among the several central locations suggested. The extra background of EC1 buildings is a perfect compliment to the sculpture’s environment. We also believed it would be worthwhile to reinvigorate artistically the space around the station, so that passengers stepping off trains or buses could have immediate contact with valuable artistic objects’, he adds. 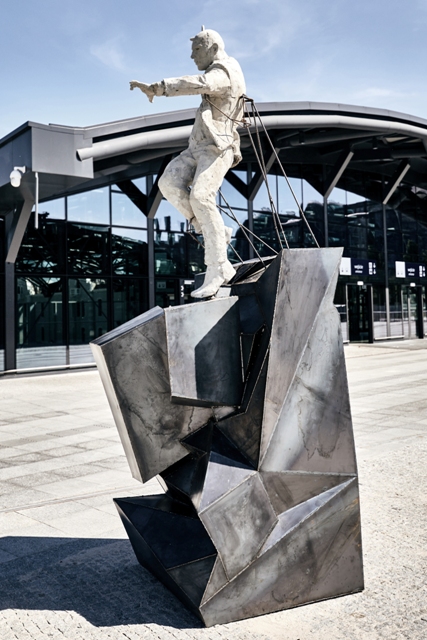 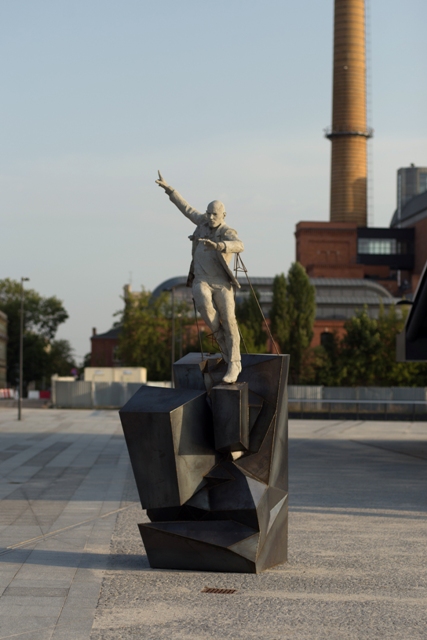 The sculpture is a double-cube form, approximately two meters high, resting on a base occupying around a square meter. The base is a deconstructed, geometrical plinth welded from black, hot-rolled steel. The other section of the sculpture – a human figure, a steel-reinforced artificial stone cast, welded fixed to the base by means of five ribbed rods – is placed on this foundation. The piece is impregnated, reinforced inside, and loaded with a ballast weighing 1000 kg. It has no moving parts and all the edges have been smoothed. In time, the sculpture is expected to be covered with rust for artistic purposes. It will be on permanent display.

Two artists from Warsaw are the authors of the sculpture – Tomasz Górnicki and Chazme.

Tomasz Górnicki is a sculptor and graduate of the Sculpture Faculty of the Warsaw Academy of the Arts. He commonly produces a variety of figurative representations with the human body as the key subject of his sculptures. A number of solo and group exhibitions in Poland and internationally.

Chazme is first and foremost a muralist and painter. A graduate of the Architecture and Urban Planning Faculty, Warsaw University of Technology. He creates architectural worlds filled with geometric motifs. He’s also an illustrator and graphic designer. His large-format compositions can be seen in a range of cities in Poland and abroad. 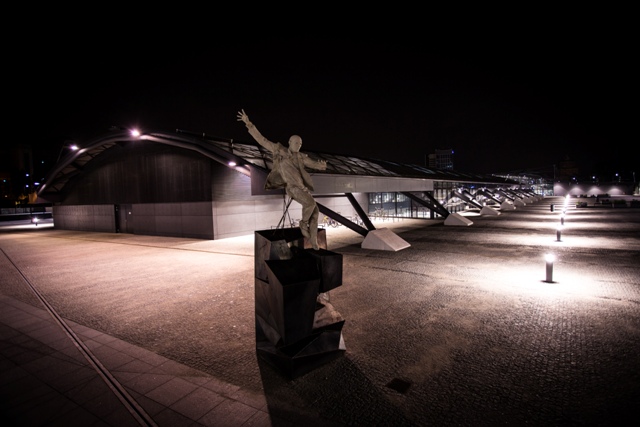 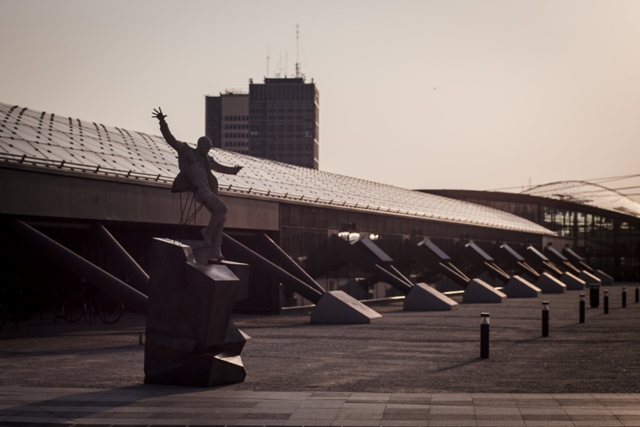 The Artists are referring to part of “Ode 3.30 – More Lasting than Bronze “ – famous poem written by Horace – leading Roman lyric poet during the time of Augustus:

“I have created a monument more lasting than bronze
and loftier than the royal structure of the pyramids,
that which neither devouring rain, nor the unrestrained North Wind
may be able to destroy nor the immeasurable”.

“Wrong weight is a reversal of Horace’s words. Man and monolith are falling apart in front of our eyes. We do not know whether the break up of the base causes the fall of the figure, or the figure collapses within itself, and the proper mass of its ego absorbs the surroundings. Both matters interact, one destroys the stability of the other. Impermanence, invalidity, decrease – artists are explaining.
“Wrong weight” is part of UNIQA Art Łódź project – an international artistic initiative in public spaces of Łódź designed to give rise to objects of contemporary art. Thanks to UNIQA’s support, 9 artists from Poland and the US have shown their work. Art installations, a mural, a base relief, a site-specific realisation, and permanent or temporary sculptures have become parts of this urban art gallery.

Michał Bieżyński, Arts Director of UNIQA Art Łódź Project, Łódzkie Centrum Wydarzeń:
“After more than 8 years of the mural project in Łódź, I feel I can say the city centre has been adequately saturated with these works. I saw murals as the first, most logical and natural step towards thinking about a contemporary art gallery in Łódź’s urban spaces. The massed numbers of bare walls in the city centre virtually demanded to be filled with painting. The ideas has been put into practice, Łódź’s murals are famous all over the world and have become a major icon of the city. I wouldn’t like to cause a surfeit, though, a situation where numbers of the murals will be so high that the inhabitants will lose interest and the reception will become thoughtless.
That’s the reason why we started the UNIQA Art Łódź project to create various works of art – sculptures, bas-reliefs, installations, site-specific realisations. Diverse materials and technologies were employed to make the project as varied as possible. It is essential that residents were presented with the broadest possible range of graphic solutions, so that the project, beside the purely artistic format, offered some visual education.

Here You can take a look at the “making of” movies of previous realisations: