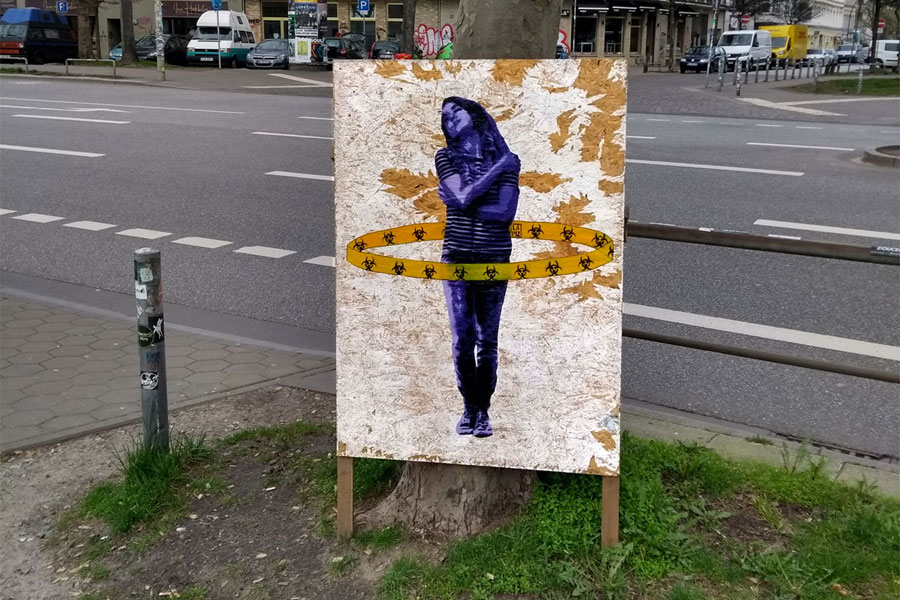 The C-Word !!! Normally, LAPIZ would be painting at international street art festivals. Normally! A word that has lost its meaning. Now, everything is new and different. Festivals are not an option for him at the moment, instead LAPIZ went back to the roots and worked with the material he started with more than a decade ago, posters and wheatpaste. Since the beginning of C. three distinct motives have been created, each covering a different stage during the new normal.

#1 Life in Time of Corona 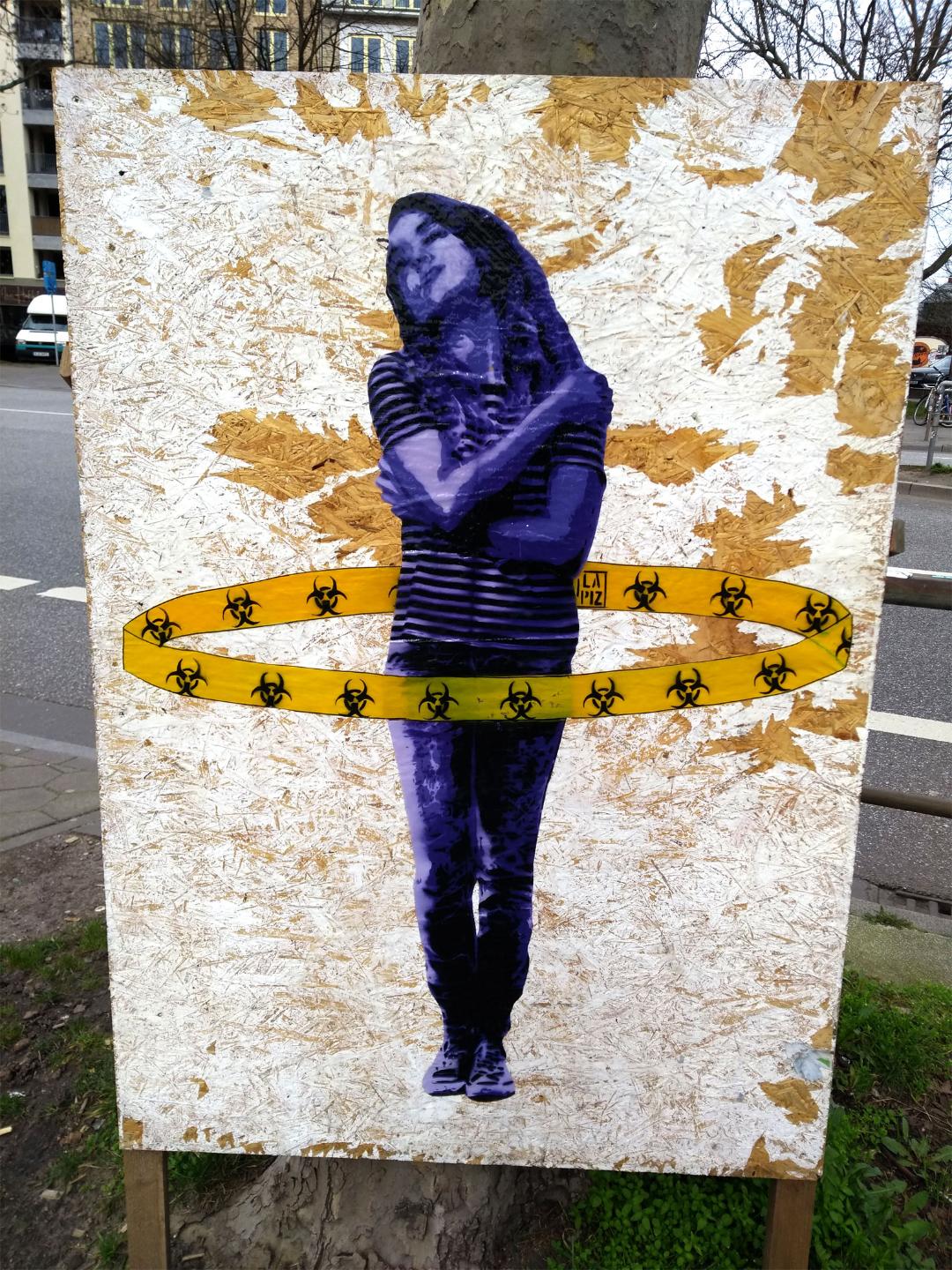 A girl hugging herself, surrounded by a yellow social-distancing hoola-hoop was the first motive glued on a poster stand normally reserved for local politicians. It was right in front one of the biggest supermarkets in Hamburg, one of the only shops open in the first weeks. Instead of focusing on the mask, LAPIZ wanted to concentrate on what it would mean to be locked away in a city without having contact to anyone, not even your neighbours or friends. How would you feel, when everyone else would be regarded as a potential threat, when hugging would be hazardous and close ones would not be allowed to be close anymore? Would you hug yourself, close your eyes and pretend it was someone else? 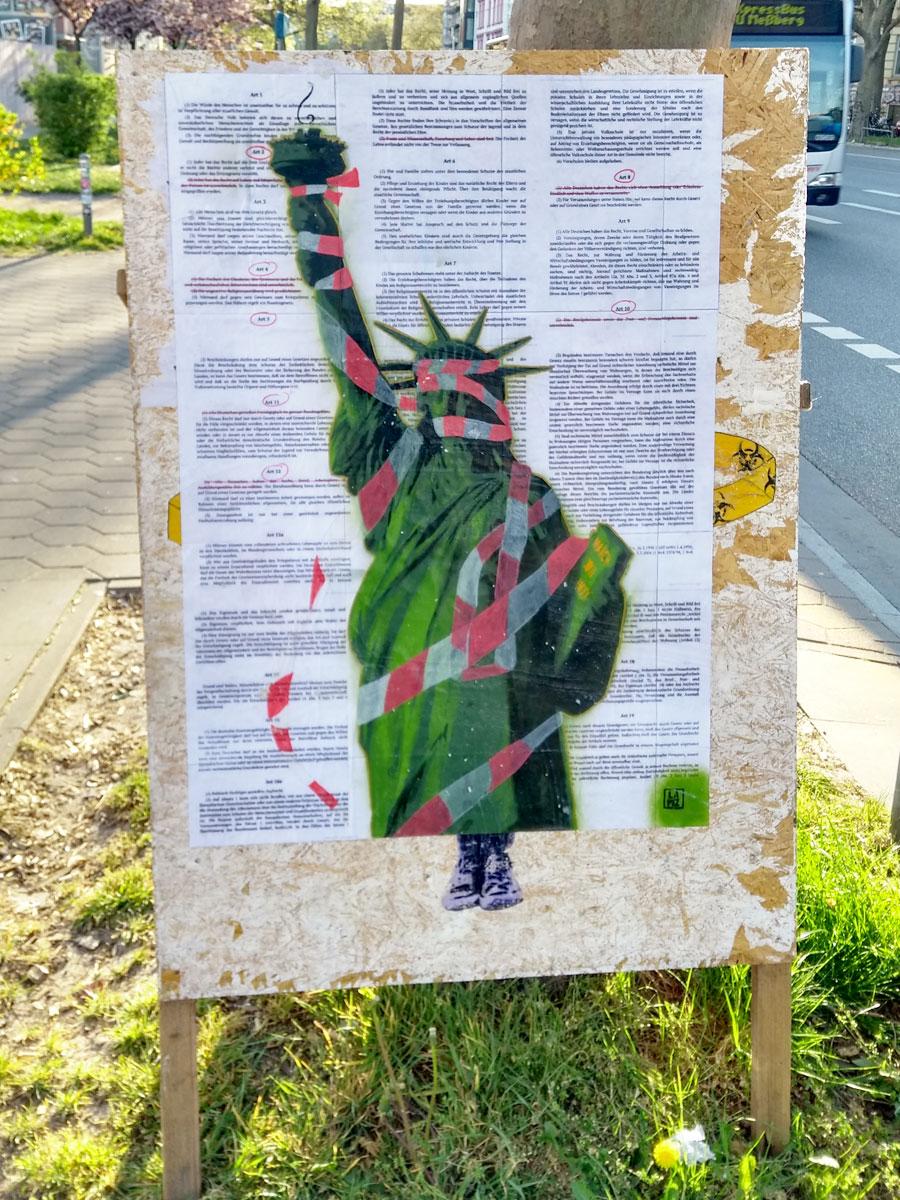 The feeling of loneliness did not go away, but it felt as if the people adapted to it, the new normal, this is what life is now. Since the first motive some time had passed and the second instalment was glued up on the same poster board a few weeks after the restriction of the lockdown were loosened. While supermarkets, shops and restaurants were allowed to open again, most other things were strictly forbidden and many liberties granted in the constitution “temporarily” suspended in favour of safety and security. So, while shopping was possible, protest wasn’t, religious groups could not gather, access to playgrounds was restricted and culture was declared obsolete. A new feeling came about, disbelief: how easy it was to take human rights away. To address this, LAPIZ printed big sheets of the first articles of the German constitution, crossing the articles deemed to be irrelevant to the system. Onto this changed constitution he painted the universal symbol of freedom, Miss Liberty, wrapped in banner tape used by police to mark restricted areas. 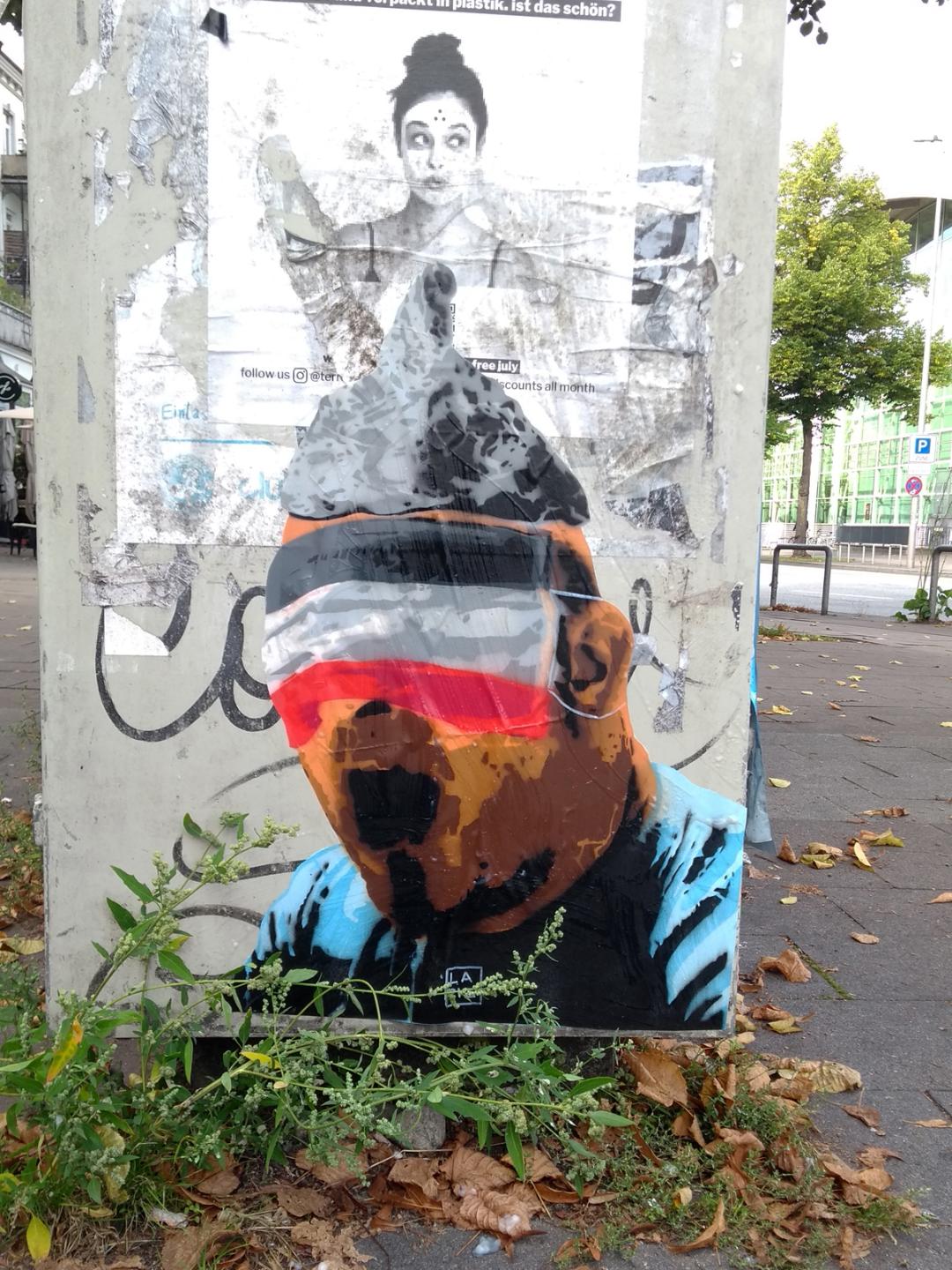 Again, time has passed, restrictions have further been lifted, travel is possible again, so are services at church, the museums are open again. Protests are possible if the rules of social distancing and wearing a mask are observed. Rightfully, people started to protest against the restrictions implemented by the government, but a small group took the stage, the Covidiot, according to the urban dictionary a person ignoring the warnings regarding public health and safety. On top of that all kinds of wild stories are spun to explain the virus many of them clearly anti-Semitic. The challenge of all these motives was to not resort to the obvious and paint a mask; here it had to be done. However, the black-white-red mask is covering the eyes. The colours are taken from the Reichs-flag a symbol of all those rejecting the legitimacy of the modern German state. Here it was used as a metaphor for people blinded by anti-Semitic propaganda something all C-deniers around the world have in common,

So far, the Covidiot is the last entry in this body of work. However, the pandemic is not and it is just days since the best-known Covidiot in the world got himself tested positive. We will see what other challenges lay ahead.

LAPIZ lives in Germany and taught himself to paint in the streets of Dunedin (New Zealand). In Africa he worked on HIV/AIDS, the social injustices there were processed via artistic statements in public places. In Argentina he adopted to paint huge socio-critical stencils. His art needs space, because »if you have something to say you should speak up. This might not result in a smile but at least it will make people think.” 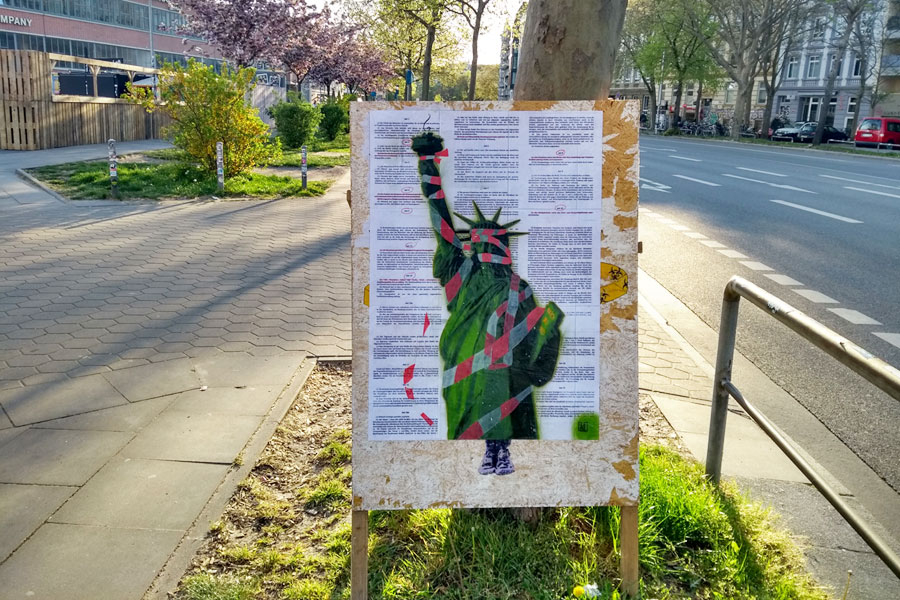