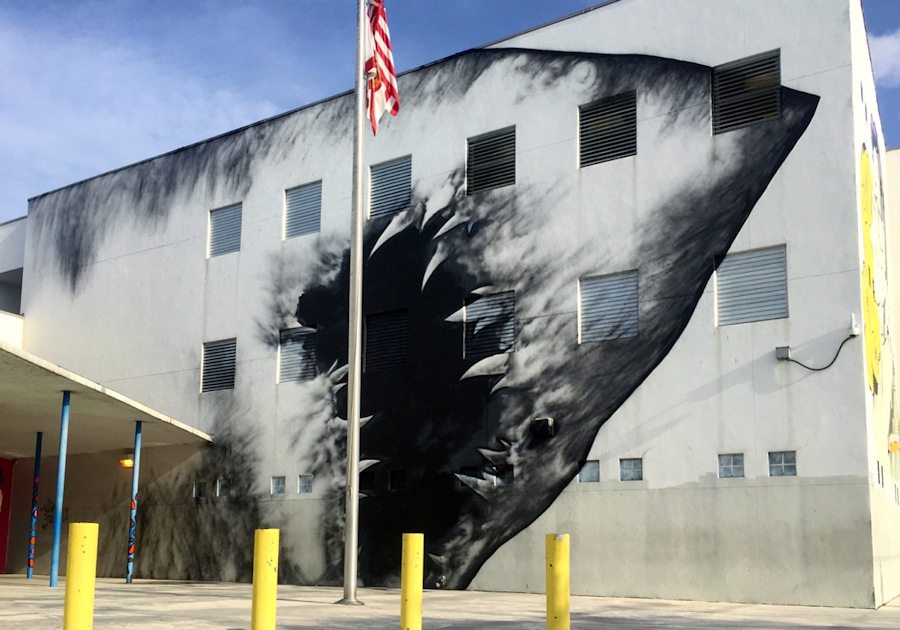 Street art aficionado and  freelance ISSA partner, Tim Jentsch, loves nothing more than regularly heading out on street art-hunting missions. Read on for his take on the street art scene in some popular destinations, and get the insider tips for your next trip.

– Hi, I’m Tim, 36, raised in Munich, based in Brighton. I’m a seasoned Virgin Atlantic cabin crew member and street art photographer. Before I tell you more about myself and how I got to do what I do, I’m going to introduce you to some of the best spots for street art around the world and show you a few pieces I photographed that really stand out. Let’s start with NYC: 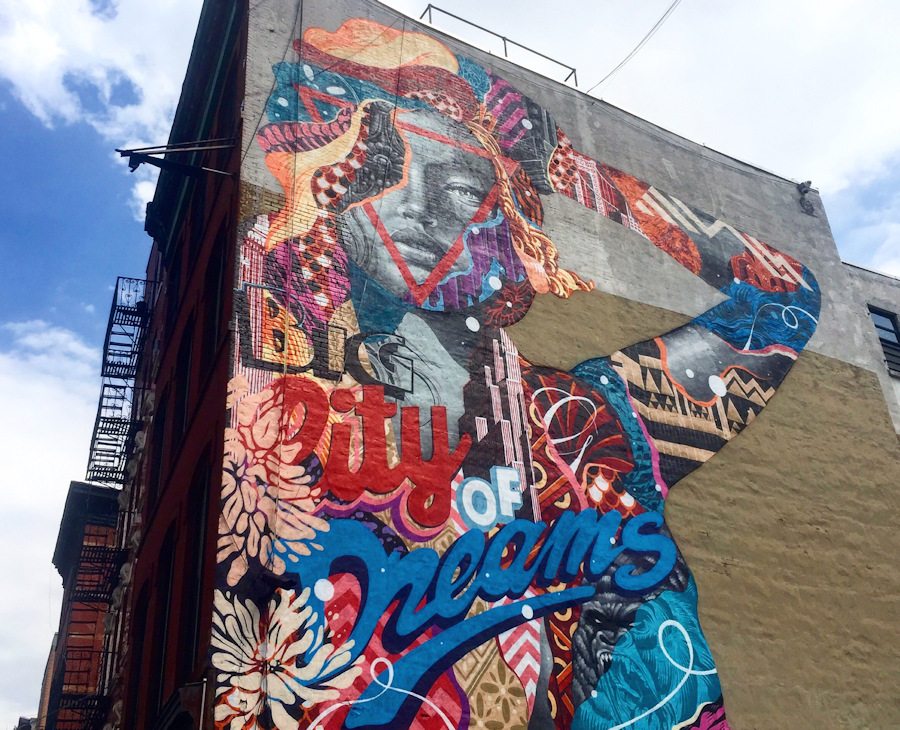 New York is a street art mecca with various forms across the city. It has several areas with a higher density of street art; the best ones being Bushwick and Williamsburg, both in Brooklyn, and the Lower East Side and Soho in Manhattan. The Bronx and Harlem are great too. There aren’t many well known artists that can’t be found somewhere in NYC. Now the tricky part starts. I’ve taken photographs of several hundred pieces of street art in NYC alone so choosing one has been a tough call. The piece I picked is by LA born artist Tristan Eaton. It popped up in 2015 and can be found on Broome Street, between Mulberry and Lafeyette Streets in Soho. This artist is one of my personal favourites. He has a clever way of mixing pop photography (in the form of black and white imagery) with his own style of mixed patterns. Titled ‘Big City of Dreams’, for me this is a typical NYC mural; the colours pop in the sunshine, it somewhat represents what NYC is all about and is beautiful to look at for the novice as much as the seasoned street art enthusiast.

Los Angeles
Los Angeles has a lot to offer too but requires transport and a bit more patience to find the real gems – there’s a lot of street art and it’s spread over a vast cityscape. If I had to narrow it down, I’d say the best areas are the Downtown Arts District, Venice and Santa Monica, as well as the up and coming Culver City and Playa Vista. Long Beach has also become an interesting location since the recent launch of the Pow! Wow! festival which originated in Hawaii and can now be found in a number of cities around the world including Taiwan and Washington DC.

This piece stands out. I shot it not too long ago after a very early morning start at first light in Long Beach, CA. I like the way the mural interacts with the structure it is painted on – an arresting example of how street art can create intrigue on an otherwise bland surface. It is titled ‘Arrested Emotion’ and was created by the Lithuanian artist Ernest Zacharevic. It appeared in 2016 (as part of the Pow Wow Long Beach Festival) and is located at 419 East 6th Street. 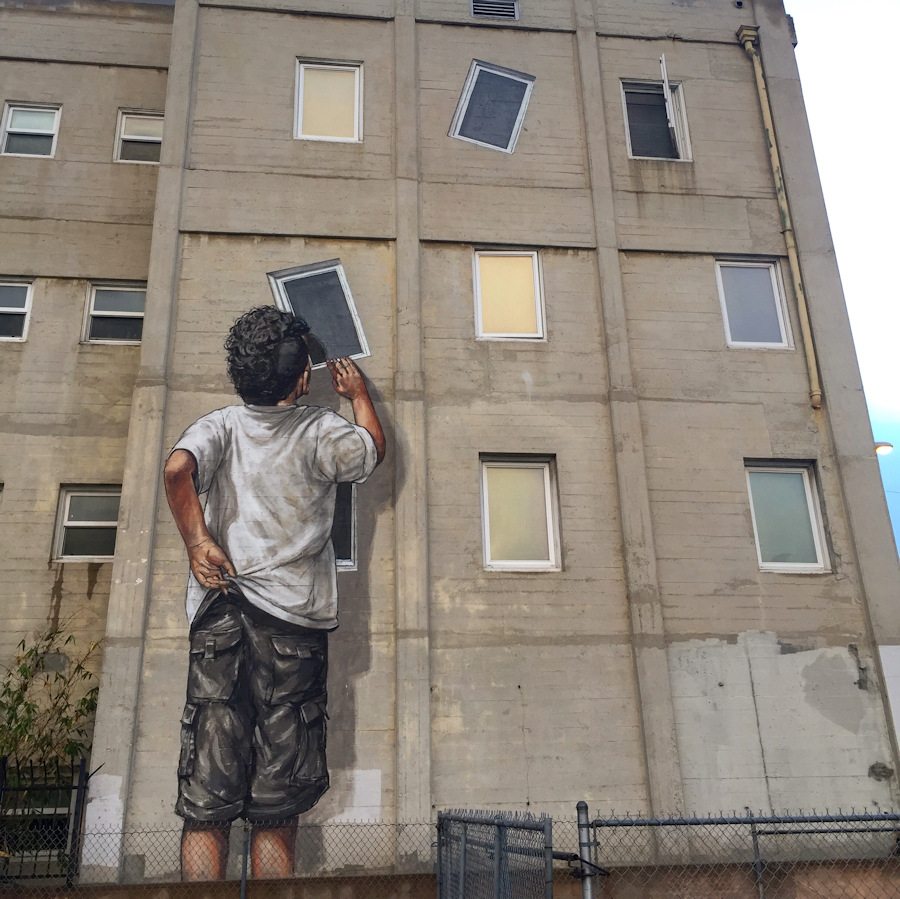 Miami
In my eyes, Miami – especially its Wynwood District – is one of the US’s most exciting neighbourhoods for street art. It plays host to the Art Basel Miami festival every December, and has one of the richest collections of street art per square mile, with a spectacular array of large scale murals. This includes works by a selection of international artists such as Kobra, Os Gemeos, Herakut, Shark Toof and StarfighterA.

A Shark Toof mural in Miami

The mural I’m introducing you to here is by Shark Toof, the pseudonym of a well known LA-based graffiti artist, stencilist and muralist. It was part of the Arts Week in 2014 which transformed the Jose Diego Middle School in Wynwood into a colourful art gallery. Seventy-three artists from around the world joined forces to bring home the message that low income pupils deserve the Arts too. Now art can be interpreted in any which way the viewer decides. For me the fact that school kids literally pass the ‘evil jaws of a shark’ on the way through their school’s front entrance to gain shelter from the possible evils out on the streets is a metaphor for choosing the right path and sends out a great message.

Las Vegas has recently decided to jump on the bandwagon and create its very own street art festival called ‘Life is Beautiful’ which is another great addition to the scene in the US. Las Vegas is a master at providing stimulation in any shape or form to its masses of visitors and the growing interest in street art hasn’t been ignored. An ever expanding open-air art gallery located downtown, not far from Fremont Street, hosts huge walls painted by international artists such as Pixel Pancho, D*Face, and ROA.

Johannesburg
South Africa, especially Johannesburg, is also an exciting destination for exploring street art. Areas worth mentioning are Braamfontain, Maboneng and Newtown. The latter is home to a great flyover with 100s of murals, stencil graffiti and paste-ups beneath it. These neighbourhoods are all great to explore on foot. Every corner you turn leaves room for a surprise. The piece I admire the most is by America’s celebrity street artist Shepard Fairey a.k.a OBEY, best known for his HOPE poster used during the Obama campaign in 2008. This large-scale mural was created in 2014 on Juta Street in Braamfontain, Johannesburg for the 25th anniversary of the anti-apartheid protest ‘Purple Rain’ and pays tribute to a legend, Nelson Mandela. What face would the people of South Africa rather see rising above their city than that of Madiba? 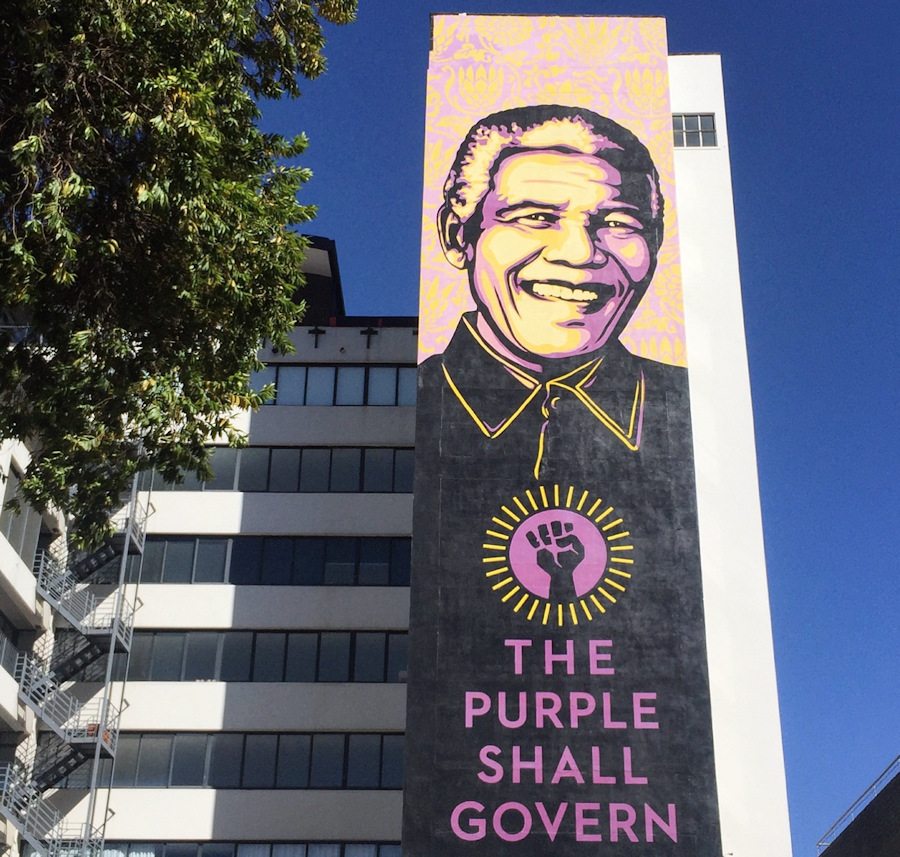 Also worth checking out in Johannesburg is the ‘Westdene Graffiti Project’, a community mural initiative curated by graffiti photographer Derek Smith and hosted in the suburb of Westdene. It all kicked off in June 2015 when local residents started to kindly donate the walls of their properties to ‘art-up’ their neighbourhood. According to Derek it “really brought the community together”. It now hosts over 50 murals and 70+ local and international artists from Germany, the UK and Miami. A great selection of photographs of the project can be found here. During my last visit to Johannesburg, Derek Smith kindly offered to show me around for a one-on-one tour. The piece below really stood out. According to Derek, a decision had to be made on the day whether to paint a rhino, a lion or a bonobo; the more peaceful and loving of the three. The artist went with the bonobo. Great choice! It’s by local artist Ben Jay Crossman a.k.a VERONIKA.

Bonobo mural – part of the Westdene Graffiti Project in Johannesburg

Now you know a few of my hotspots and have seen some of my work, I’ll tell you a bit more about my life at Virgin Atlantic. I’ve been flying for the airline since 2008 – a career that I love but rather stumbled upon and never thought I’d be doing for such a large proportion of my life. I don’t regret a thing. Coming from a photography background I noticed street art becoming more and more popular just by keeping my eyes open when exploring cities. I took the occasional snap and that was it.

Whilst I initially had no idea about the background to the pieces or even the names of the artists who created them, over time it became something of an obsession. I needed to find and shoot more of these colourful and diverse pieces of art. In order to achieve that I asked Google questions such as: “Where do I find street art in NYC?” Those days are long gone. I now do plenty of research into the art scenes of all of the places I’m about to travel to and create myself a map full of stars – each one represents a new experience, a new and exciting moment, a new piece of art. On the way to each star I ask myself, will the piece still be there or has it been vandalised? The finest details matter: where will the sun be when I get to the piece, what feelings will it evoke in me, what will I think the artist is trying to say? On the flip side, am I going to find a bunch of annoying cars parked right in front of the mural to spoil my picture? The life of a street art hunter can be a mostly self-inflicted struggle, but at the end of the day it’s a lot of fun too!

Since I’ve started to share my pictures on my Instagram page I feel I’ve become part of a community, an ever-changing world of art that’s very fast-paced. Choosing what to post is the hardest part as I’ve accumulated thousands of images, from tiny stencils and stickers or wheat paste-ups to large walls and murals – I like all elements of street art. My aim is to launch a website and publish more articles about this colourful world which is out there waiting to be discovered by you. Watch this space! 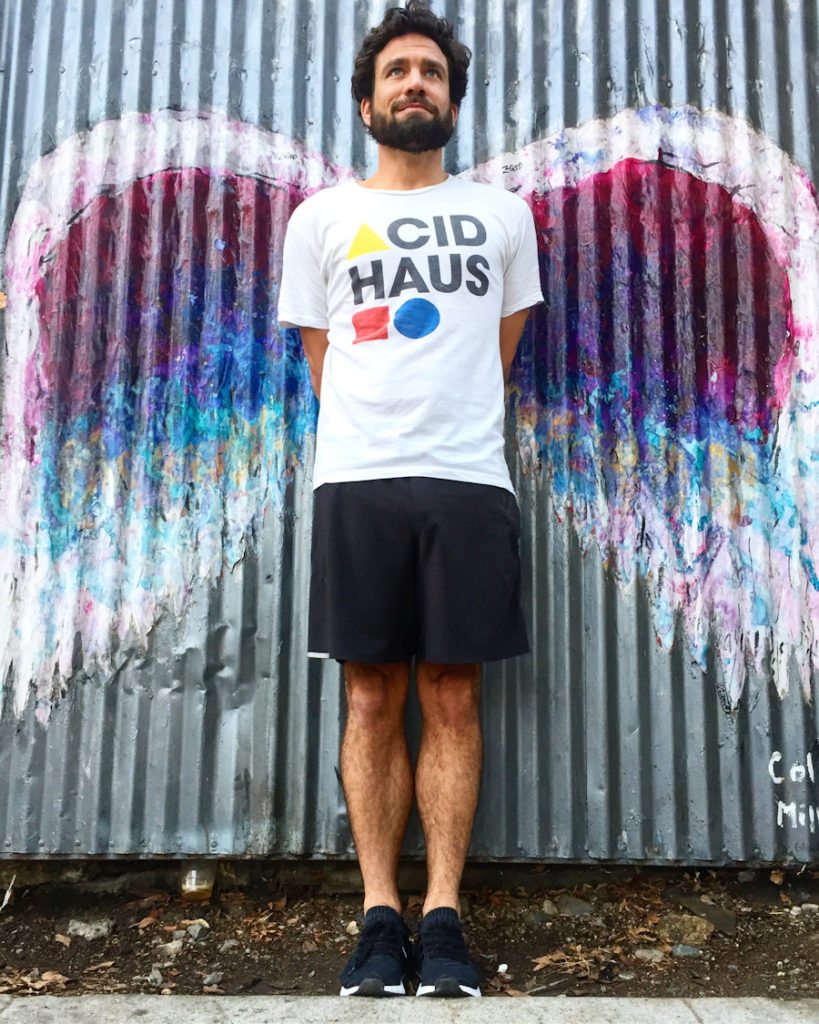