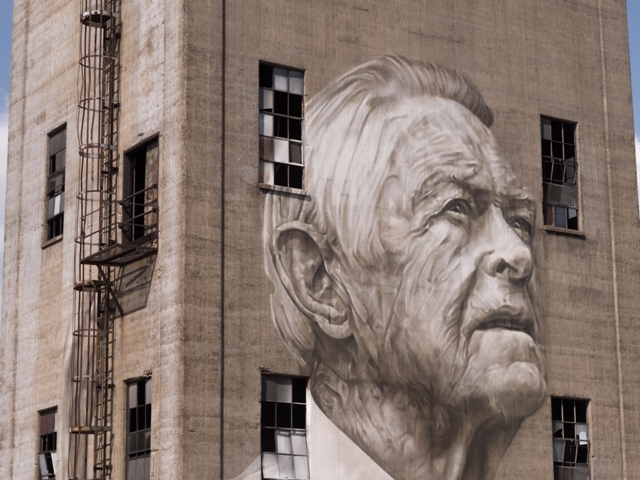 The artist is Australian Guido Van Helten, an internationally acclaimed muralist known for large-scale portraits that are so realistic they look like they could be oversized photographs. He uses a nearly black and white paint palette, allowing the gritty emotion of his subject to come through. And he likes to make a statement by painting local people.

For the Nations, Van Helten chose 91-year-old Lee Estes, known to friends as LD. He has called this neighborhood home since the late 1920s.

“It’s definitely a positive thing to commemorate people who have lived here for a long time,” Van Helten says. “You know, why do people want to live here? Part of the reason is it’s a good community, it’s got a history, people like that when they move to a place.” 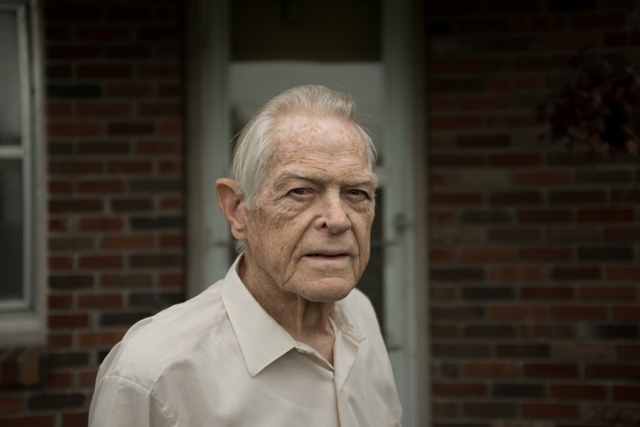 Estes can certainly provide a history of the neighborhood. He says when he was growing up his family didn’t have indoor plumbing. They raised chickens for eggs and meat, milked their own cow, churned their own butter, and neighbors raised hogs. The only place for a boy to go was St. Luke’s Community House, where he played basketball and went to dances. The Nations was largely an industrial area. He remembers Nashville Hardwood and Flooring, Ingram Spinning Mill, and four fertilizer plants. He also remembers the silo.

More: Nashville artist Brian Siskind has been filming the mural’s progress via drone.

“It used to be Gilette grainery,” he says. “And we had another, Purina grainery, that was demolished years ago, but they left this one as a historical part of the Nations.” 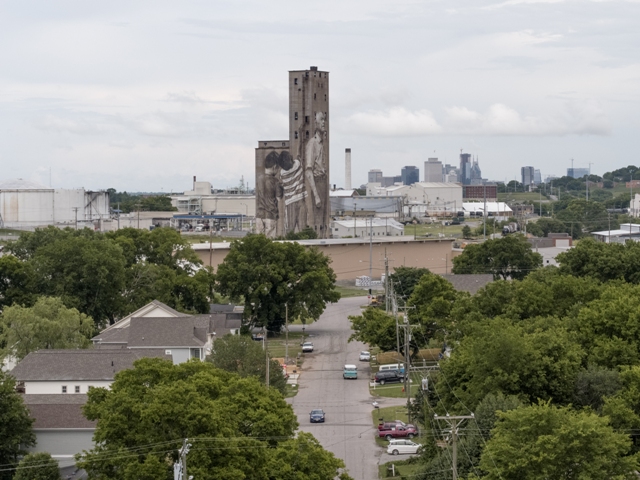 He’s been watching the change – houses on either side of his have been torn down for new construction, chic restaurants are opening, and young adults are moving in, finding the area more affordable than many other parts of Nashville. People constantly knock on his door offering impressive sums to buy the modest house he built in 1952. 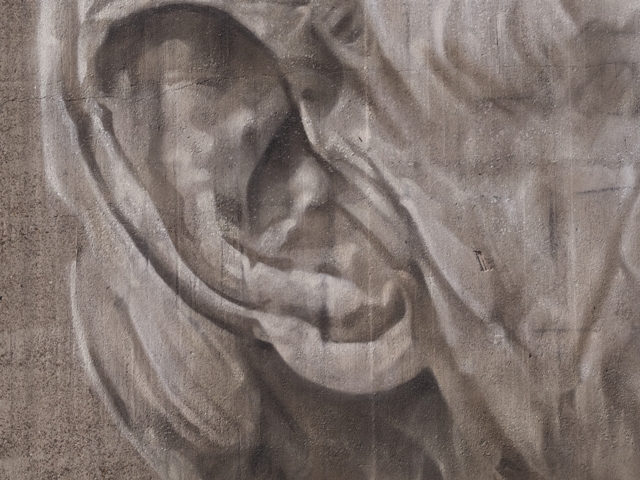 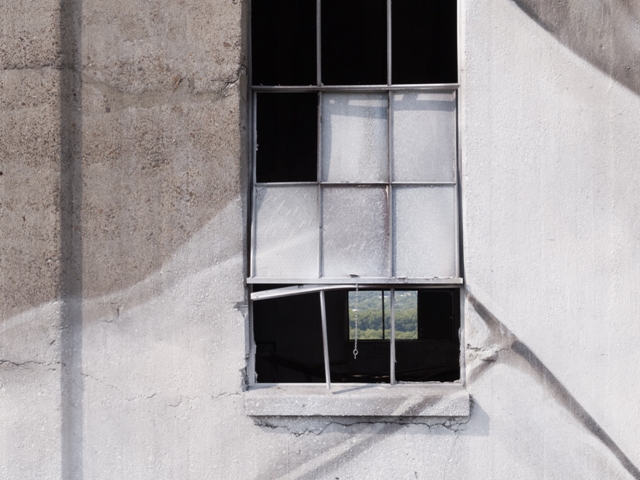 “Now, they’re building two houses where one property was built before, and all the older neighborhood has pretty well gone out or moved other places, very few of us are left,” Estes says. “And eventually I guess they’ll get us. Hopefully I can live my lifetime where I am. 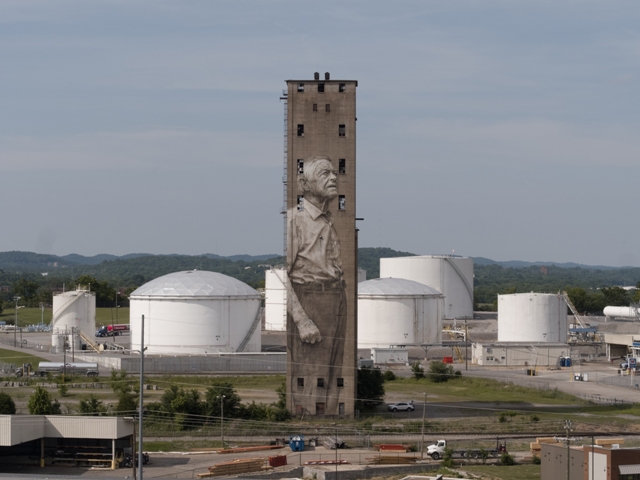 Estes spent his working years in the purchasing department at Genesco. Now he spends his days sauntering around the neighborhood, volunteering to help other seniors in craft projects at St. Luke’s, and checking in daily at a food market formerly owned by his late brother. He’s well known in the neighborhood, but his celebrity status has now skyrocketed. 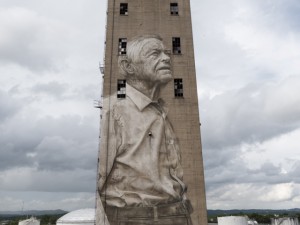 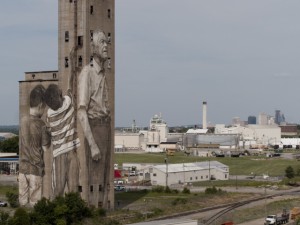 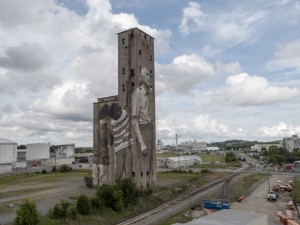 Photos from the making by Those Drones – Brian Siskind 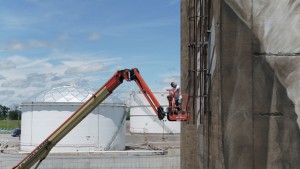 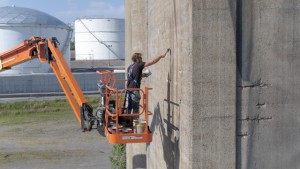 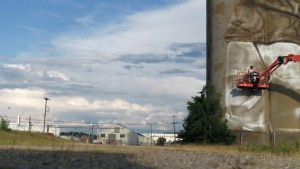 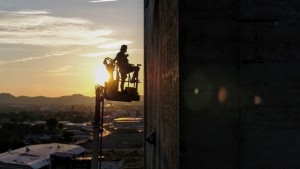 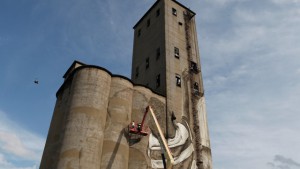 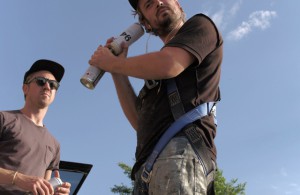 Nashville is a great place and from what I gather has some powerful momentum in the arts and culture. I’ve enjoyed being here, but mostly my focus has been on the area of the Nations and West Nashville. I like to focus on a community in the content of the mural and also lifestyle while I’m working in a place, so I have mostly stayed local, worked and spent my time in the neighborhood while I’ve been here.

See any cool art while in Nashville?

I have seen some great mural works downtown also facilitated by Nashville Walls Project but mostly have just been working and focused on my task at hand.

Can you tell me about Mr. Estes, the gentleman you painted on the silo?

It is important for me and my process to reflect a community’s character in my work, and through this aim I engage in a process of discovering and learning about a place through community engagement and consultation.

Mr. Estes has been part of this group for many years. To me he stands symbolic against the inevitable tide of gentrification. This is an issue that in some cases has left the underprivileged in worse positions, as developers and real estate agents move to capitalize on the Nashville housing boom.

I find the relationship between murals and gentrification conflicting, and in this work there is this conflicting yet harmonious composite of the two sides of social change. There is juxtaposition between a mural that discusses and commemorates the blue-collar demographic while at the same time being a powerful part of the change in the area. This is a dialogue and talking point that I hope this mural can create.

And the kids in the mural?

I feel it’s important to try to give something back to young people while working on my projects, including them in the process in some way. The composition of Mr. Estes and the children is intended to push the idea that this mural stands not for a single individual but the community as a whole.

I will be working on a few projects around internationally and hopefully more in the USA in the future. Over the next few months I plan to work in Finland, Europe, and India before returning to Australia later this year.

When did you start painting graffiti? How long have you been painting murals?

I’ve been practicing murals with aerosol since I was probably about 14 years old. My first piece was on the train tracks in Melbourne, Australia, which me and a couple of friends did in broad daylight with bucket paint and cheap spray cans from the two-dollar shop. Since then it has been a progression of different styles that has brought me to this point in my career.