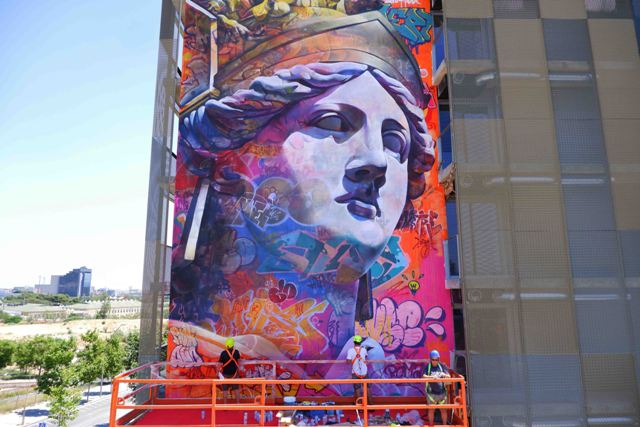 In their first art intervention in the city of Barcelona, PichiAvo has painted a mural in the facade of the student residence Livensa Living Diagonal Alto of Temprano Capital Partners, designed by the Portuguese architect José Quintela da Fonseca.The artistic duo has designed a mural that shows a very particular version of Pallas Athena’s sculpture in the Austrian Parliament, in Vienna.

In this mural, the artists have showed again their incomparable style in deconstructing the purest classic art iconography through the incorporation of urban expressions. Despite not being a contemporary figure, Athena has become a key figure in the collective imaginary of our civilisation. Being a representative character of diverse feminist schools of thought, this goddess represents the warrior, protector, wise and independent woman. 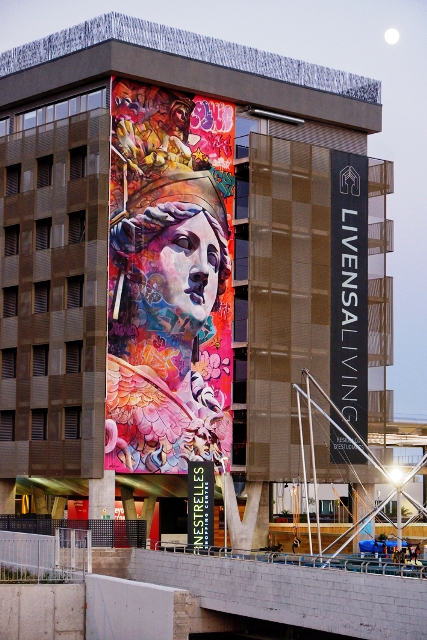 PichiAvo have highlighted in several occasions that one of the main goals of their works is to provoke any kind of reaction to the spectators. Therefore, this Pallas Athena artwork in a 25m height mural aims to enhance those attributes embodied under her name to throw a unifying message in support of the women empowerment as producers of knowledge, fighters, intelligent, emancipated and, above all, free. Moreover, just as the representation of Athena in several European Parliaments depict protection to citizens and territories, PichiAvo frames here the goddess’ figure as the protector and guardian of the city of Esplugues de Llobregat and, more explicitly, of the students who will inhabit Livensa Living Diagonal Alto Barcelona.
Through this intervention in Livensa Living Diagonal Alto, PichiAvo confirms again that the beauty of classical art it’s not their central focus but to disaggregate those symbols through a contemporary and transgressive aesthetic in order to construct new conceptual lectures and communicate fundamental values and concepts within our society. 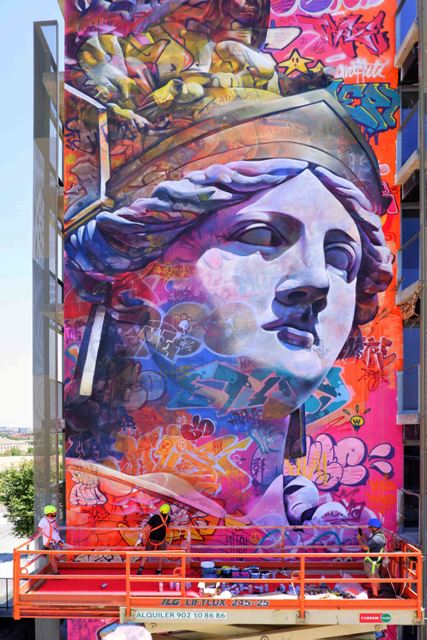 REBOBINART
Rebobinart was founded in 2012 under a clear philosophy that puts urban art at the service of the cultural and social dynamization of public space. We are experts in developing social projects through quality urban art. We also work to promote the most elaborate street art expressions and destigmatize the perception of an art form that has often been considered invasive and loutish.

This is why our cultural entity promotes a professional vision that places urban art at the service of society through the creation of projects that are rooted to the territory and add value to urban space. Likewise, our projects generate new ways of communicating with citizens, encouraging a critical spirit and transmitting messages from a social perspective.

TEMPRANO CAPITAL PARTNERS
Temprano Capital Partners was founded in 2013 and it is the first private investment and real estate development company that works in the students’ housing and designs buildings that include mural artworks enhancing the presence of urban art in different cities.

The student residence Livensa Living Barcelona Diagonal Alto is included within the portfolio of 11 students’ housing finished or still in development that Temprano has in Spain and Portugal. In all of them, designed by the architect José Quintela da Fonseca, Temprano considers artistic projects of this kind. In 2018, Temprano launched a first project in its student residence TSL Marquês de Pombal in Lisbon with the Portuguese artist Mr. Dheo. This June, Mr. Dheo intervened a new student residence in Oporto (Portugal).