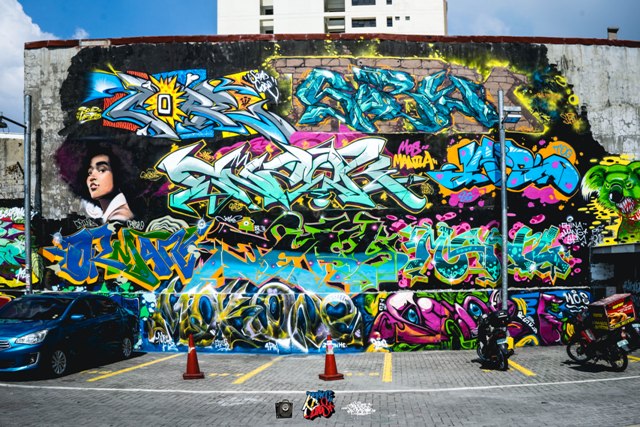 It’s that time of the year again where the biggest international annual graffiti jam ‘Meeting Of Styles‘ sets foot inside the Philippines. The line-up was huge and featured artists from countries all around the world such as China, United Kingdom, Japan, USA, Germany, Singapore,Indonesia, Malaysia, Italy, Vietnam, France and Korea as well as many local artists from around the Philippines. 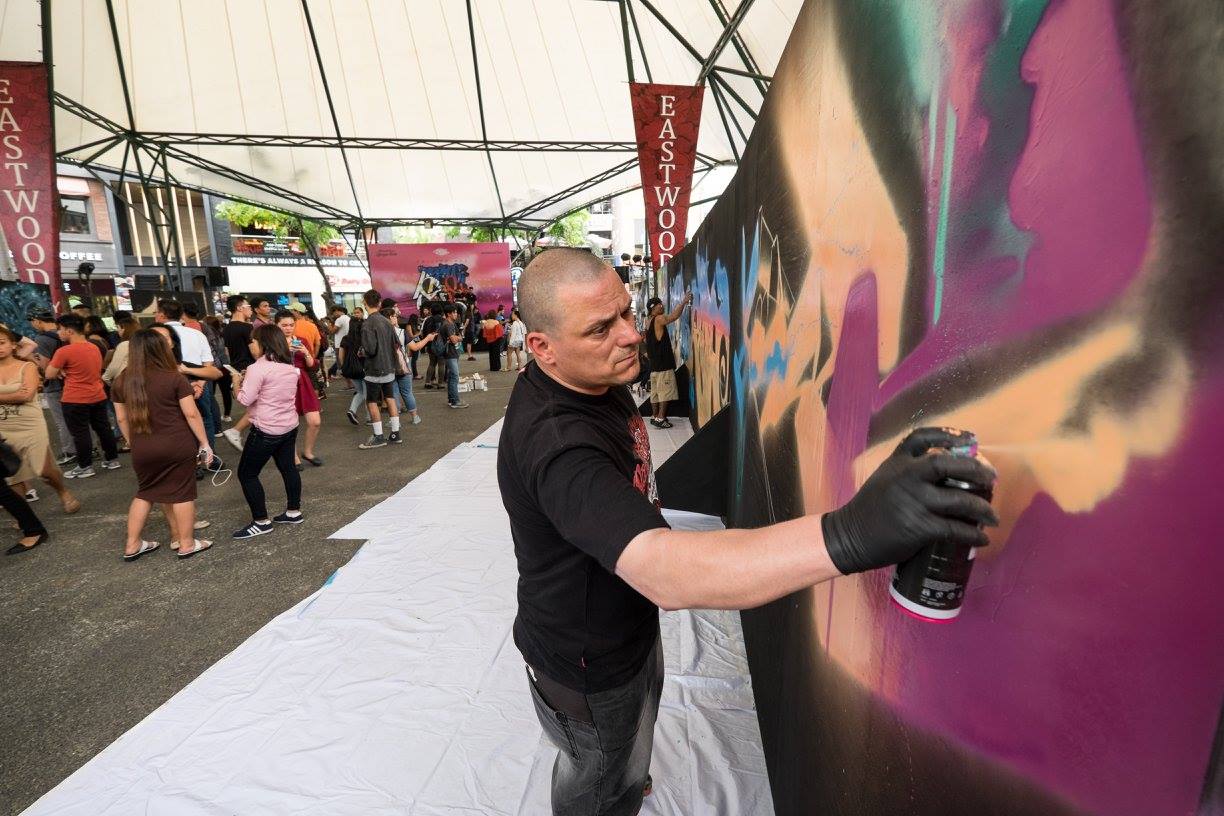 This year the event was being held at the official sponsor ‘Task Us’ parking grounds on Aurora BLVD in Quezon City, which is a metropolis that makes up part of Metro Manila. It is a busy area with traffic moving snail paced, as expected most days in Manila where it is not uncommon for a 2-hour journey to travel just a few km. With commuters squashed inside kitsch decorated Jeepneys (the most popular means of transport in the Philippines) which have now become a ubiquitous symbol of Filipino culture. Manila currently ranks as the most densely populated city in the world.

But first there was a official launch party to take place in the upmarket complex of Eastwood. Eastwood is a popular area with many young Pinoys and features many bars and restaurants serving cooking styles locally and internationally. This kicked off in the afternoon and attracted spectators who were not used to seeing this art form in action. Cell phones were out snapping away as the urge for selfies just couldn’t be resisted. It was a chance for the general folk to meet and greet these artists and conversate on a range of subjects. 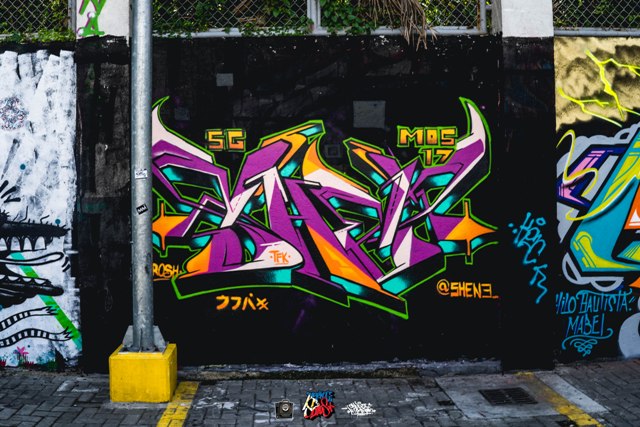 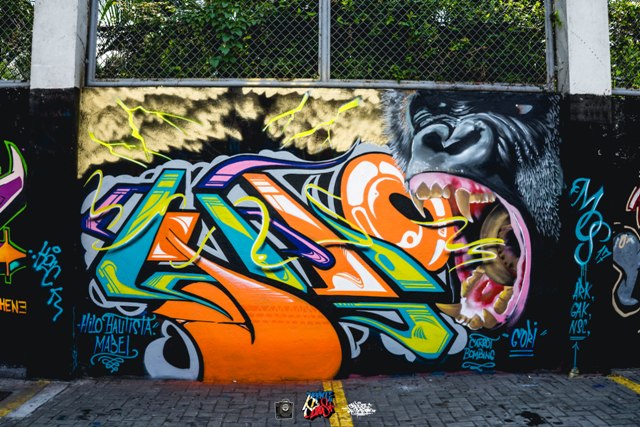 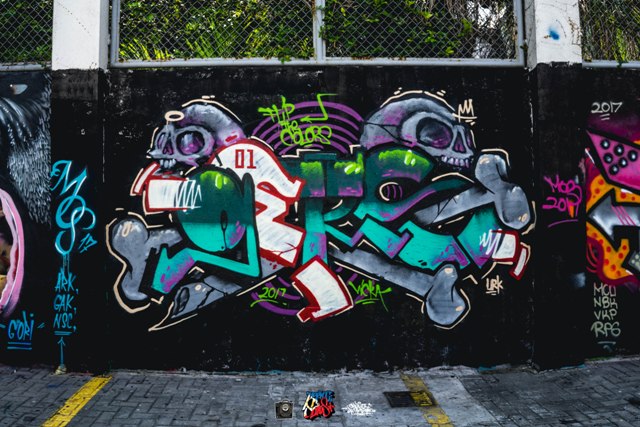 This Eastwood event featured a few of the artists warming up ahead of the next day’s main event. There was a stage set up and local hip-hop group ‘Bawal Clan’ put on a breath-taking performance with hosting duties from local street artist and food connoisseur ‘Dee Jae Pa’este’.

TGI Fridays had supplied much needed fried chicken and rice which helped reduce the over powering effects of katzenjammer that we were still enduring thanks to the late-night beers the previous evening. 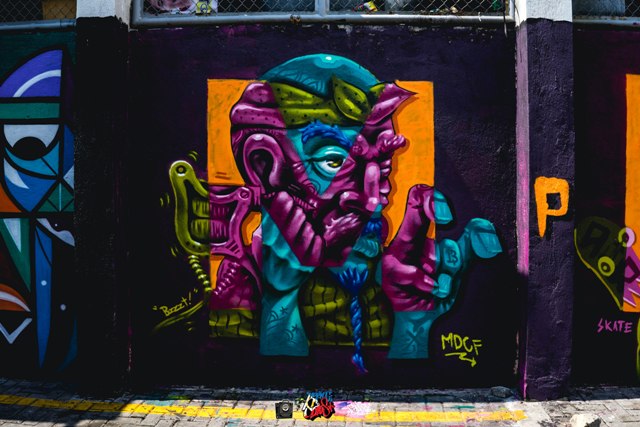 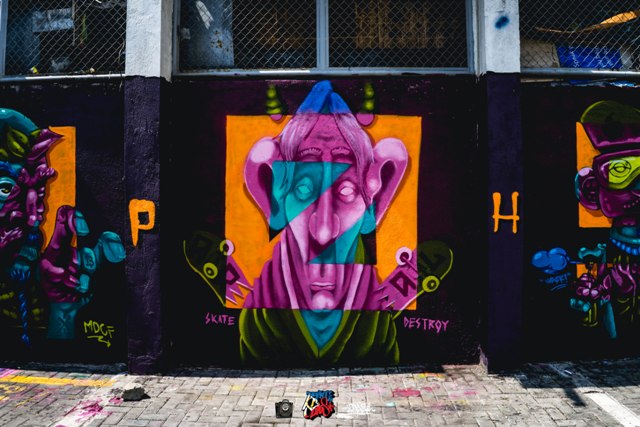 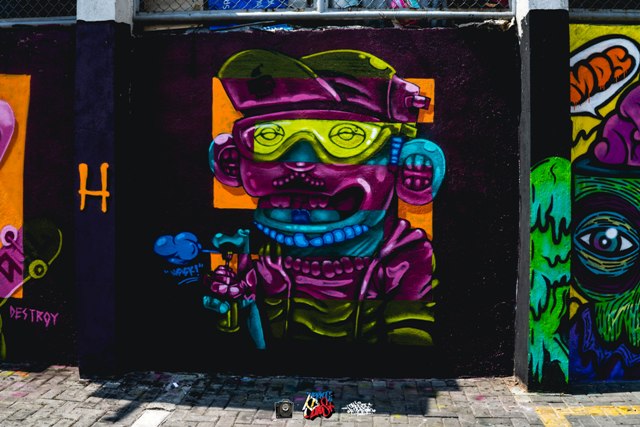 The event has been organised by ‘Tripp63’ a recognised and reputable figure in this Filipino sub-culture. ‘Tripp63’ is part of the Manila based ‘Carrot Bombing’ crew who are some of the most active and commissioned artists in the Philippines. The paint for the event was provided by ‘Tankos’ which has now become a leading brand in the spray can market. ‘Lokal hostel’ in the Makati district had provided the accommodation for many of the writers making it easy for them to commute together to the event. 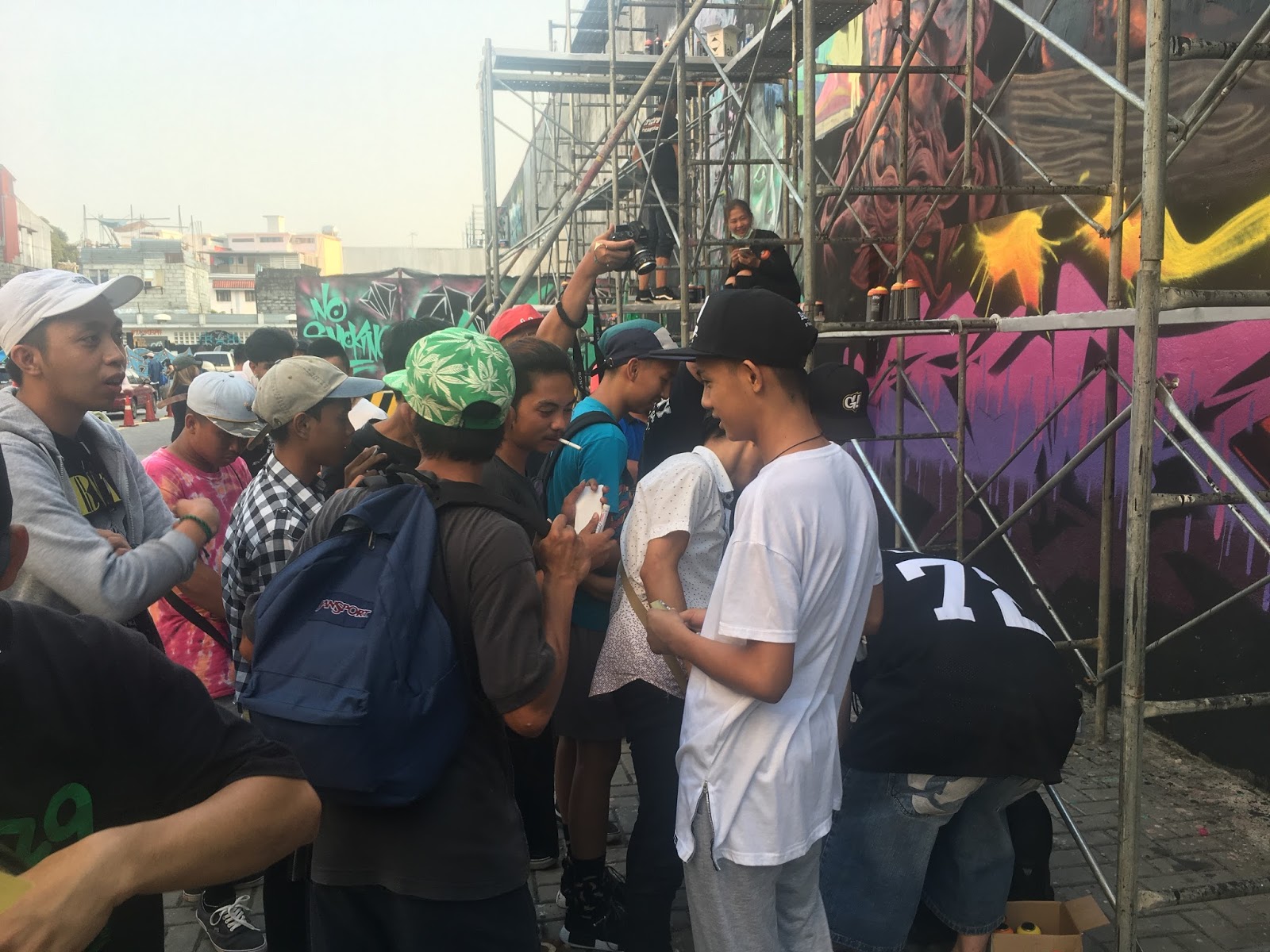 As we approached the ‘Task Us’ premises and exited the taxi we were hit by the strength of the scorching heat (which is a daily occurrence in the Philippines). It was already 35 degrees Celsius at only 10am! I massaged every inch of my body with sun-tan lotion knowing that if any part of me was exposed to the sun’s rays I would have turned lobster colour quickly. The scaffolding had been erected and the walls buffed ready for the writers to get started.

It was a relatively slow start, as I strongly suspected many opted to stay out the sun until it cooled down a little (which it never seemed to do). Local artist EXLD found a creative way to block the rays as shown below.

Stickers exchanges are extremely popular in the Philippines and it is custom for writers to give out some of their artwork based stickers to spectators, however once this act is noticed to be taking place the artist would then be mobbed by swarms of young aspiring writers eager to exchange their home made stickers. In this pic below UK artist Azerox is trying to cope with the demand of kids rushing to get their hands on his sticker sheets produced solely for this ‘Meeting Of Styles’ event. 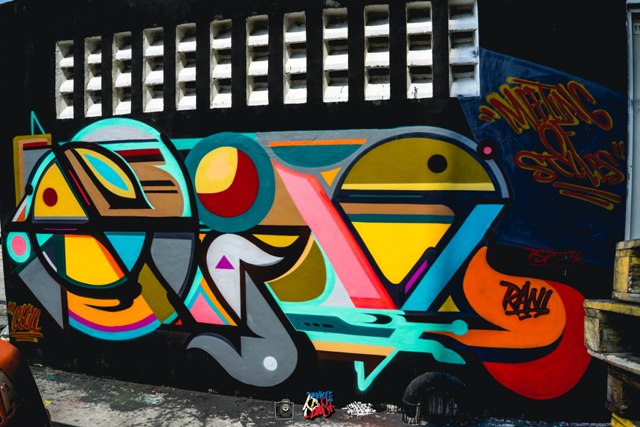 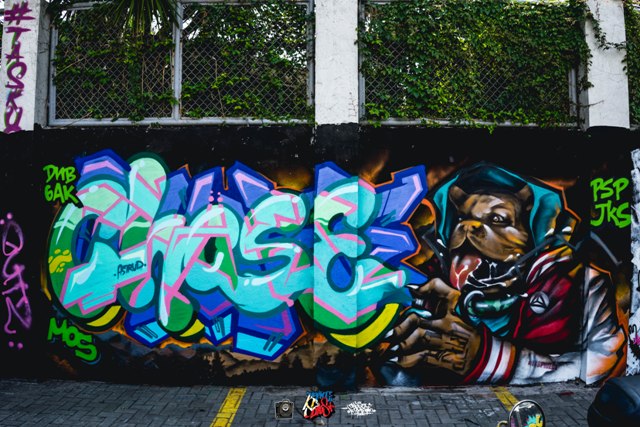 There was beer submerged in ice cool water to help us through this sweltering day as well as a BBQ and some merchandise such as t-shirts, keychains and caps from various artists that were featuring at the event.

There was also a unique stall selling shirts to raise awareness of the campaign #justiceforgino which is a heart wrenching story of a local photographer and graffiti artist Abigail Gino Basas known to many local writers at the event who was tragically murdered by a gang of youths the previous month in which the suspected killers have since absconded. This really showed the community spirit who was united in fighting such a concerning cause.

Neighbours gazed out the window throughout the day watching the action unfold. 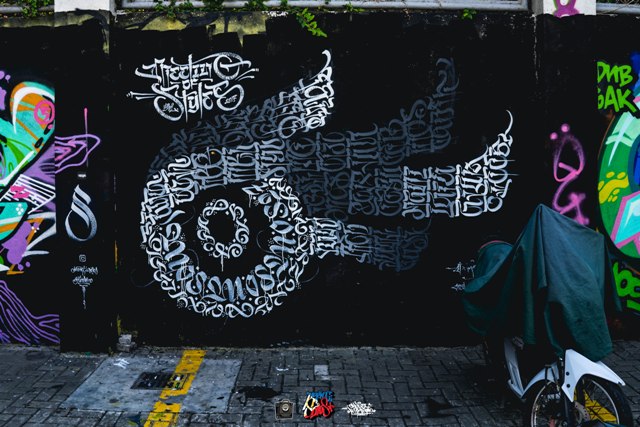 There was an eclectic offering of styles from the artists including characters, burners, old school, new school, abstract and other creative styles. The Thailand writers opted for the larger wall and produced some amazingly detailed characters which even had the security guards snapping shots! Azerox worked closely together with Thailand’s Mauy Cola to tie the various pieces in together. The Italian writers were extremely dedicated to the event and had informed me it was a 30-hour exhausting trip to reach the Philippines the previous day.

Well-known local artists such as Egg Fiasco, Quiccs, Chill, Flipone, Kookoo, Meow, Nevs and EXLD were all out in force and produced some great walls. These artists are now inspirational for the up and coming younger generation that are following in their footsteps. Thanks to events like these taking place it is putting this sub-culture on a global platform. 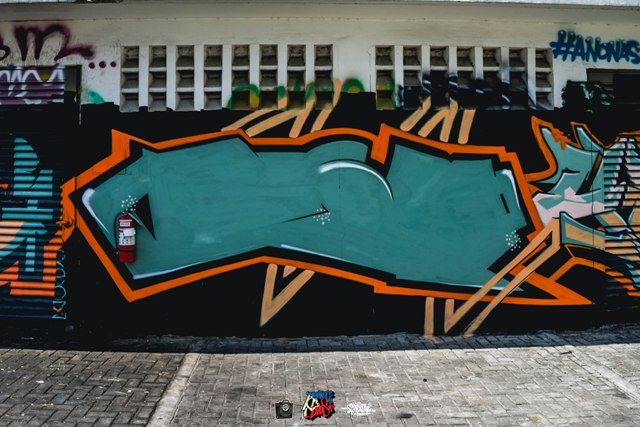 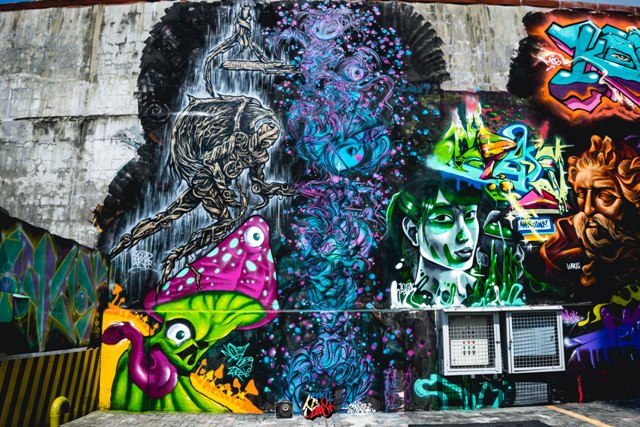 As the day went on the crowds grew as skateboarders turned up to exhibit their latest skills. Cars and trucks exposing their huge sound systems kept crowds entertained and drew in even more people who seemed to be fascinated by what was going on and would come to investigate. 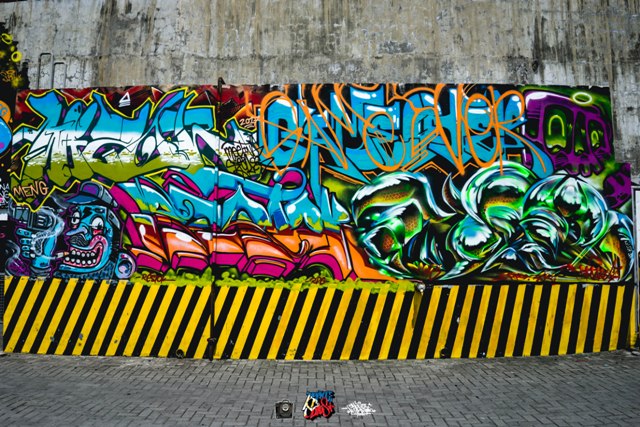 The media had got wind of the event and a news reporter had been ordered down to report for the national newspaper. Also, South African photographer Shaun Miller on behalf of ‘Mean Bear Media’ had travelled all the way from China to capture the event.

Painting proceeded to the early evening until there was not a beam of light left to shine and we were forced to retire until the following morning. My feet were painful and I needed a shower. After some negotiation with the taxi we made our way back to the hotel to get some much-needed rest so we could be awake bright and early the following morning to continue our works in progress. Graffiti jams are a great way to make friends around the world who all have common interests. 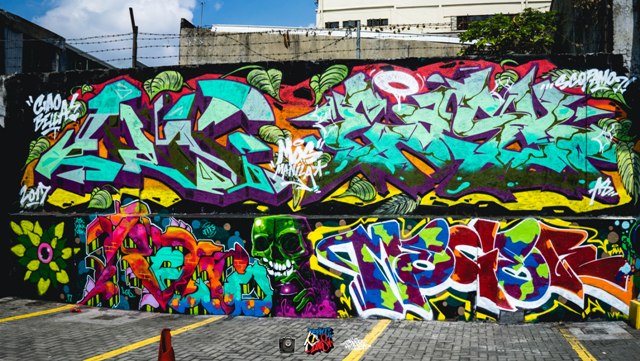 For more images of the event please visit:  meanbearmedia.com
To stay up to date on ‘Meeting Of Styles’ events visit: meetingofstyles.com
To visit ‘Task Us’ website visit: taskus.com