The Uruguayan artists Colectivo Licuado kicked off the second edition of Parees, the Oviedo mural intervention festival, with a work depicting a group of tambourine players, a mural dedicated to the women of Asturias. The piece was born of the sort of collaborative process that is the hallmark of this festival, and it can be viewed on the walls of a four-story building on Calle Amparo Pedregal, a street named in honor of the iconic Asturian women’s rights activist. 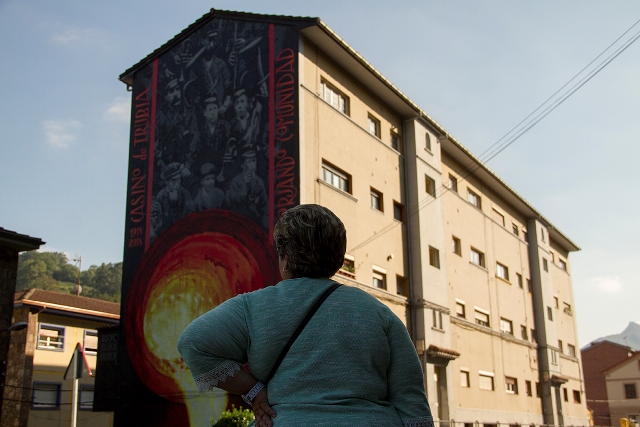 The members of Colectivo Licuado, Florencia Durán and Camilo Nuñez, say their inspiration for the project came from two different groups, both of which seek to reclaim traditional Asturian folk culture and adapt it to the contemporary world. First, there is the Nun Tamos Toes tambourine collective, a group that originally came together to play in the International Women’s Day on March 8, which this year was marked by a “feminist strike” in Spain. Since that debut, the group has performed regularly around the region, adding acerbically funny feminist lyrics to their versions of traditional songs, arranged for the tambourine and the traditional pandero cuadrado, (an Asturian double-faced, square frame drum). Colectivo Licuado met the group a few weeks ago to get the women’s feedback on their sketches for the mural and shoot photos, all of which helped to shape the final work. 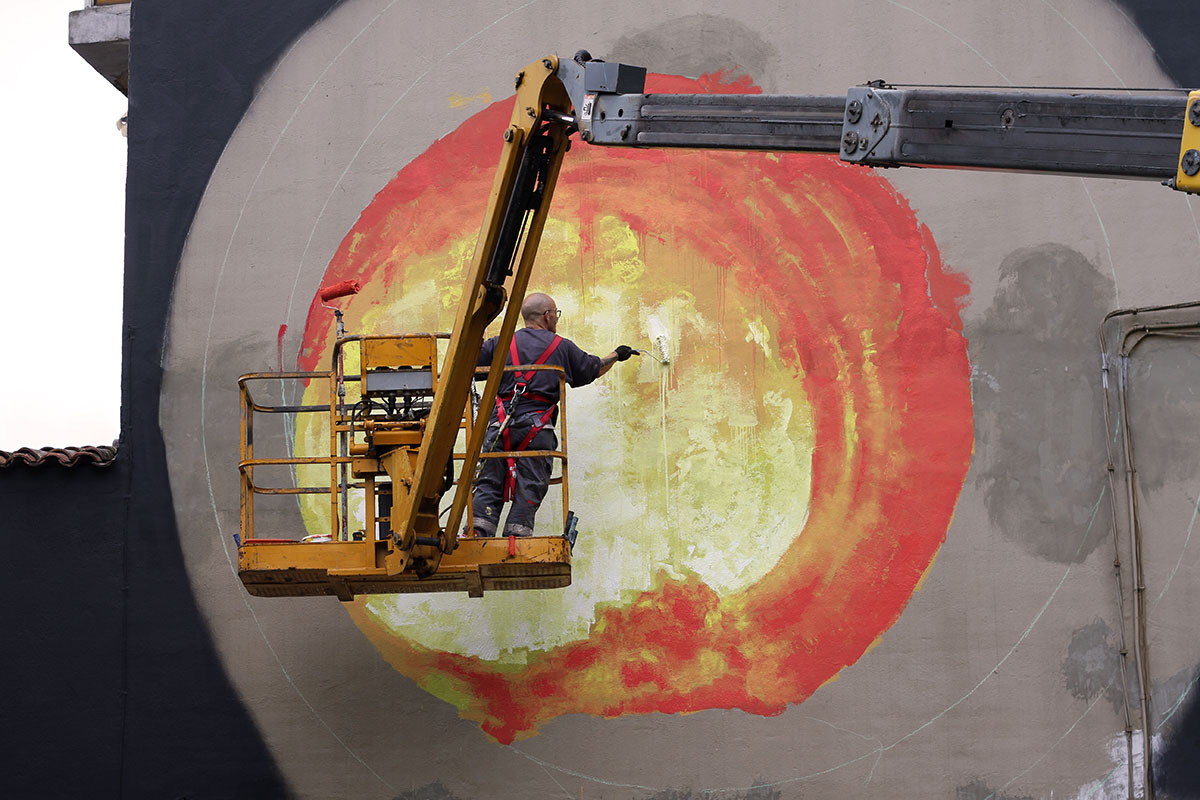 While in Asturia, the artists also met members of the FolkQueer movement, who along with other groups are breathing new life into traditional music and dance, imbuing folk art with contemporary relevance. Grounded in what they learned in these discussions and from the people they met, Florencia and Camilo have created a work of art that enshrines a vision of Asturian women in which the collective take precedence over the individual. This explains why the musicians’ faces are obscured by their instruments, with the tambourines also serving as a sort of stand-in for the moon, drawing in all the light in the composition. 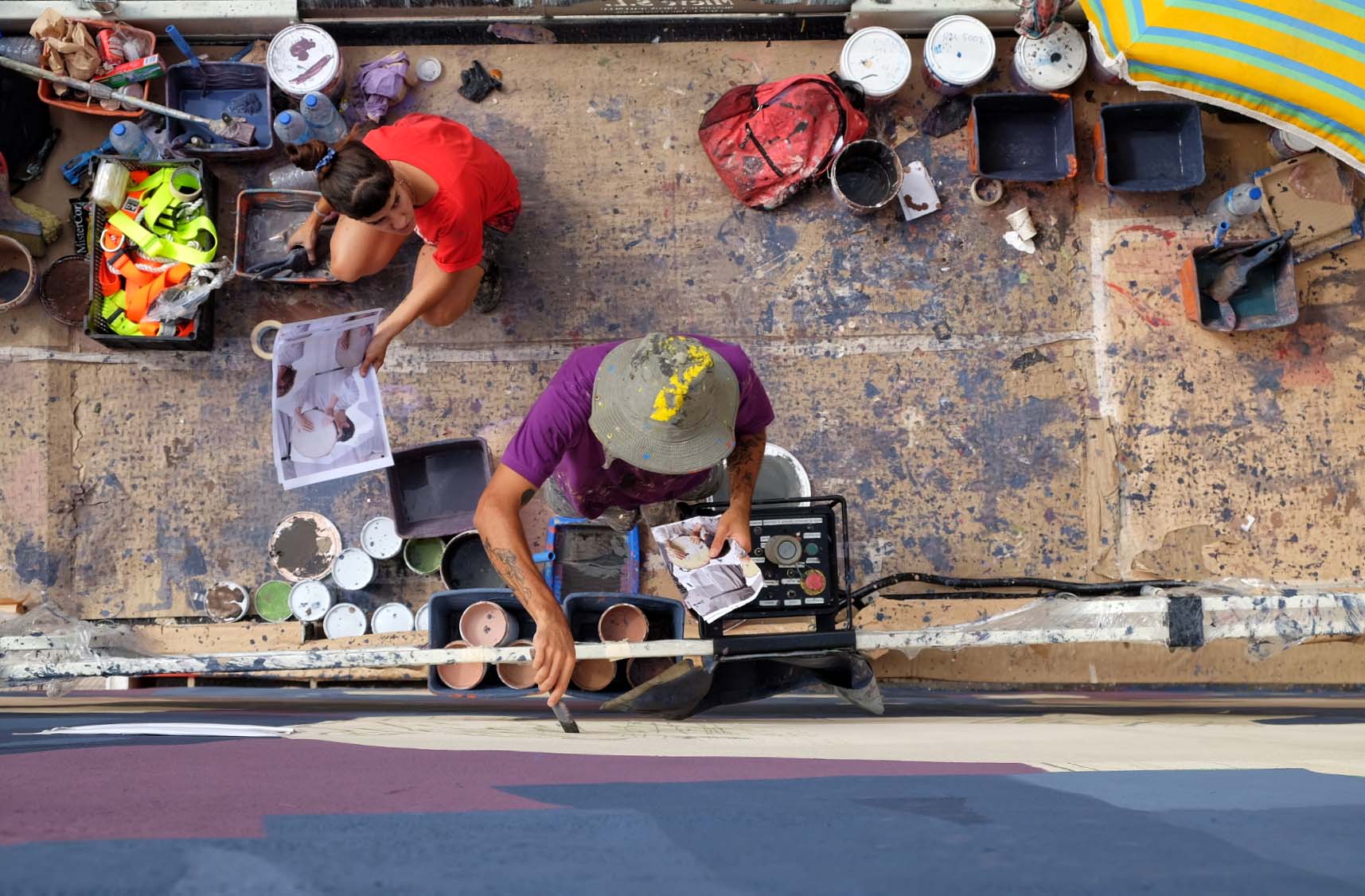 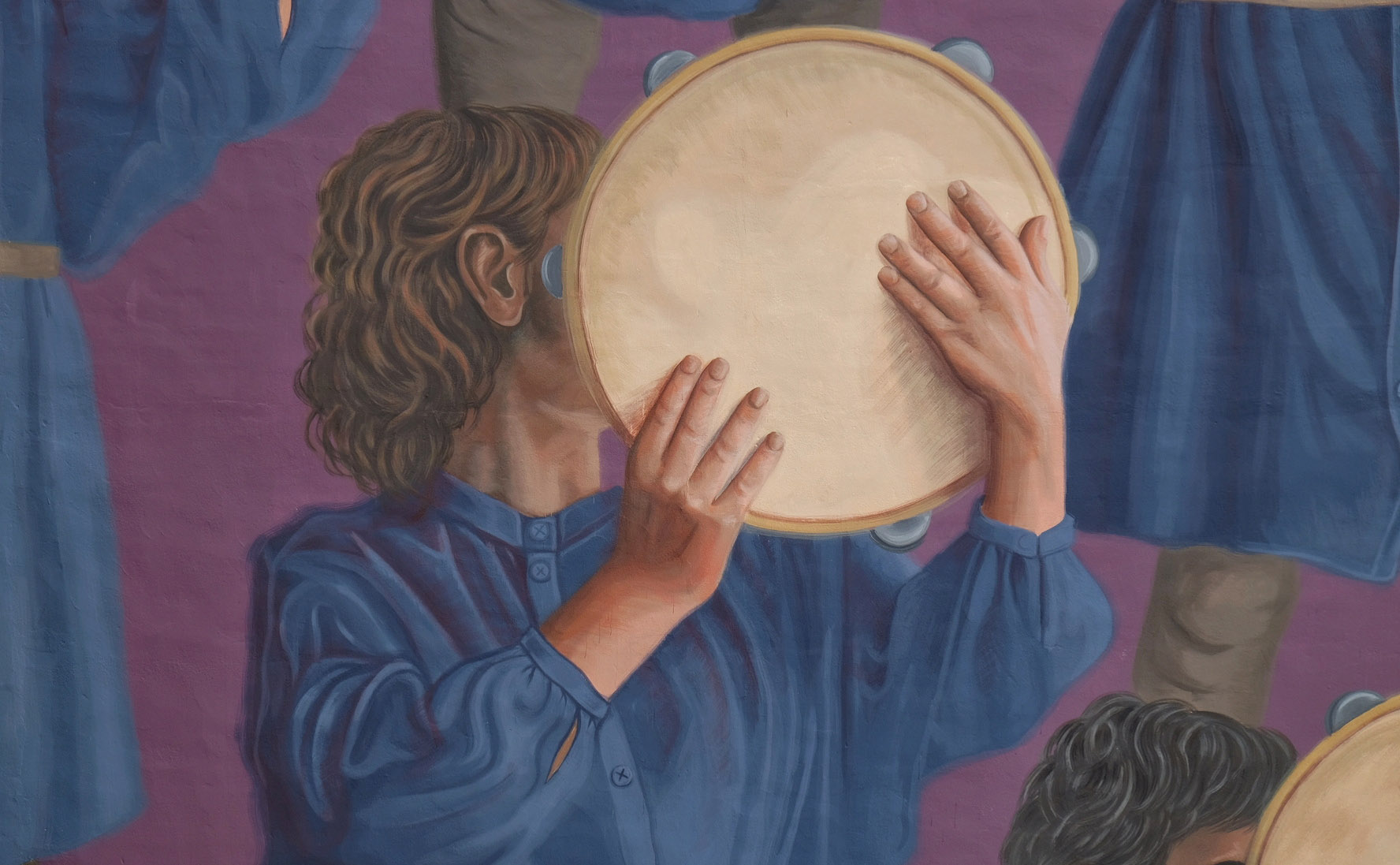 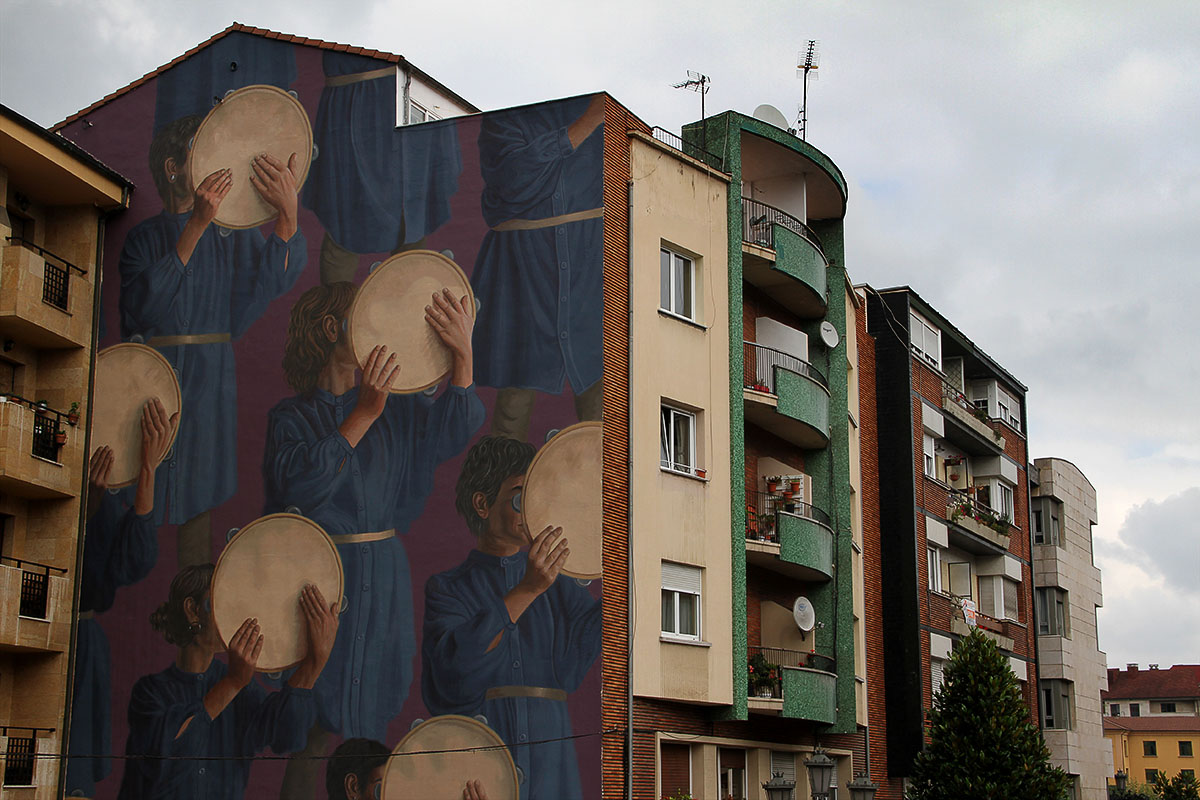 Last Saturday, the tambourine players stopped by to see the finished version of the mural. It was an emotional scene, and they played and sang a few of their songs. We took the opportunity to talk to the Uruguayans, who spend five months a year travelling around the world to make contact with other cultures and leave behind works of their own. The Oviedo mural was the result of the last stop on their 2018 tour. 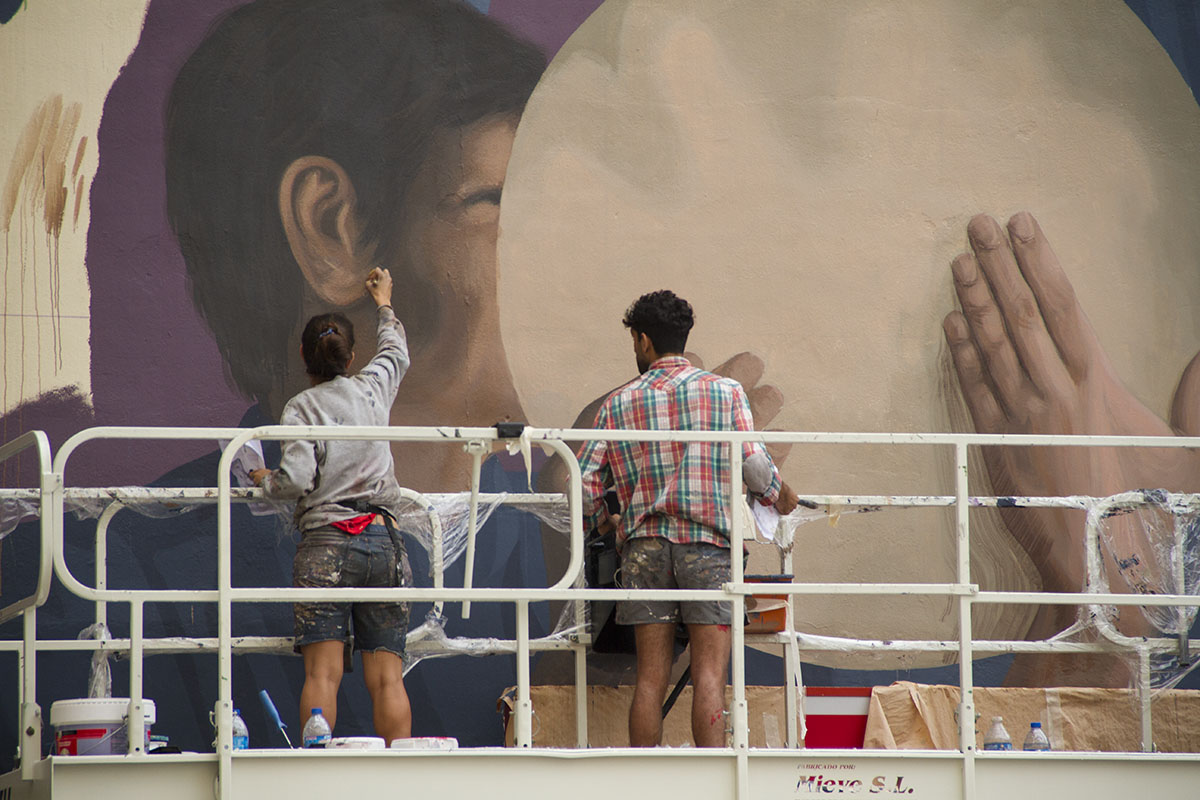 –What made the biggest impression on you when you met the tambourine players?
–(Florencia) They’re just lovely people and they have a really winning kind of energy about them. They just need to come together, to find the kind of space for themselves that can sometimes be hard for women to find, beyond their roles as wives or mothers. Women are becoming more and more aware that we need this kind of space to meet up with other women and connect with our feminine side. They’ve found a great excuse to do this, and it’s for a great cause: rescuing their language and singing feminist songs. They have a very feminist kind of euphoria, and they’re very warm.

–The tambourine group expresses itself through folk culture, which is also true of some of the other groups of young people you met with. What were the other meetings like?
–(Florencia) We loved them too. They were very young, and very open about sexual identity, which is something we need all over the world, that kind of feeling of naturalness and the ability of everyone to choose for themselves. We especially liked their idea of changing roles during a dance. We think that’s great, because usually wherever you go you see the same thing: the man leads. It’s a fantastic idea, because this kind of tiny revolution is what can end up changing the whole system.

–What was your creative process in making this mural?
–(Camilo) Every Colectivo Licuado mural emerges from a photo. This time, we did a photo shoot with the tambourine players, and we used the pictures to flesh out and improve the sketch we had made before coming here.

–Why not show the musicians’ faces?
–(Camilo) Showing all their faces would be hard, because we take a long time to paint each person. The idea was not to identify them individually, but instead to show them as women and as a collective. We pained the mural in warm, dark colors to suggest the concept of night. The tambourine represents the moon. It’s the instrument that brings them together and allows them to show their strength, and, of course, it’s the classic symbol of woman.

–What did they say when they saw the sketch?
–(Camilo) At first they liked it, but I don’t think they imagined what it was going to end up looking like. Then, they came to see the mural in process, and they were really happy.

–What about the reactions from the neighbors and the people who saw you working?
–Most of the time you’re up on the scaffolding, but even so we heard some nice comments from the people walking by. And they brought us stuff to eat and drink (laughs).