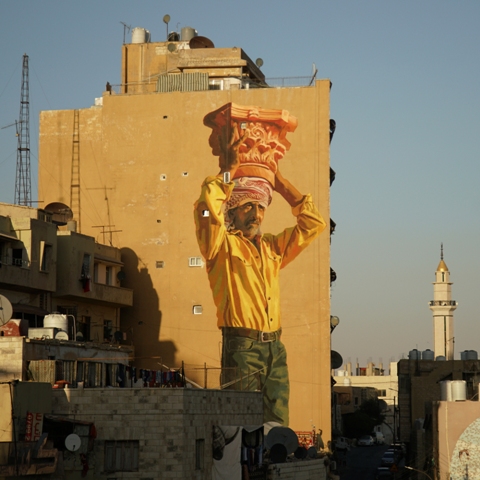 ”The Column” is the title of this latest mega mural in Amman, Jordan. Passionately created by the painting duo Persona, it is of their mission to beautify the warm beige city of Amman with bursts of vibrant color. The local mural organizer Baladk partnered with Boston-based Street Art United States and arts advocate Sara Mraish Demeter in collaboration with the Cervantes institute to commission their latest project–a 90 foot high mural by Persona, comprised by globally-recognized talents Jofre Oliveras and Dalal Mitwally. Their work, The Column for Underline Project, adds a particularly powerful addition to the city’s growing curation of unparalleled public artwork. 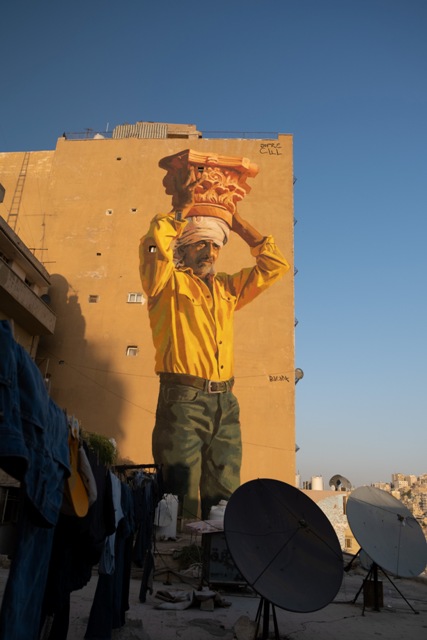 The mural depicts a Jordanian man carrying the capital of a column above his head. This regal hunk of stonework hails from the ancient rock-cut city of Petra, which experienced an “urban revolution” once settled by the Nabateans, or Arab caravan-traders of the desert, “at some point between the later 2nd and earlier 1st century BC,” as explained by World Archeology. The figure in this mural wears modern, western clothes, the classic hatta (or keffiyeh) headwear, and a determined expression that belies a sense of duty.

“This mural talks about our individual responsibility in society,” Oliveras explained of the work. “It has opposite interpretations depending on the beholder, because the same image can be oppressing or empowering people. The capital is a symbol of the cultural heritage, in this image it’s one of the Nabatean column of Petra. The mural shows local cultural elements but it also represents issues of a global society.” 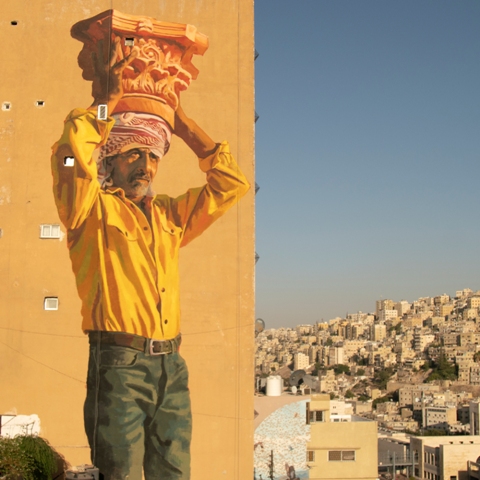 While this work stands tall in technical prowess, aesthetic beauty, and powerful message alike, there’s a story beneath its surface linked to the very issues it discusses. Once painting was underway, the duo began painting a more fragile figure carrying this culturally loaded artifact. While this might add emphasis to the depicted feat of carrying such a stone, officials intervened and asked the duo to paint a more robust figure, perhaps for a more palatable appearance.

Persona agreed, but then faced further criticism from officials on the color of their subject’s hatta (a traditional Middle Eastern headdress known by many names, like keffiyeh.) The colors are a loaded topic–to some people, a red and white hatta can even be associated with Palestinian Marxists, a sore spot for some parties. Ultimately, the hatta was painted white despite initial resistance from the artists. 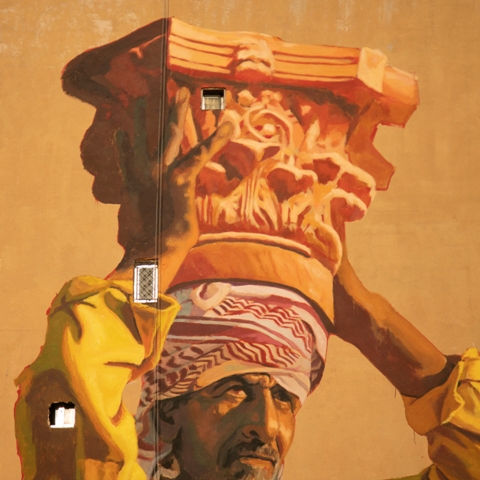 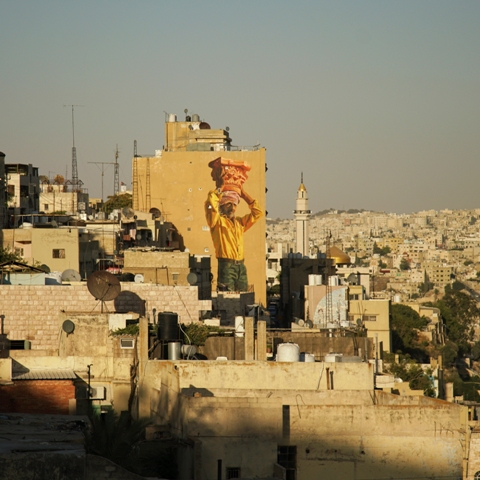 “So much outrage was caused from only certain colours and paint strokes,” explained Mitwally. “It highlighted the fear of artistic expression and its power to even slightly loosen the grip of control that the authority has. This cultural regulation ends up creating a linear and uncontested image of the culture in Jordan. A shortsighted tribal, male dominated and conservative culture.”

In their manifesto, Persona explicitly states their artistic mission to “promote cross border exchange through creative interventions,” and their understanding that “Our actions are artistic because we understand that art is a universal language.” Not only did their actual act of creation spur precisely the dialogue they’re aiming for, but its results have left a beautiful monument, a soft, warm, painterly mural of the human spirit present in the capitol city of this historic nation.