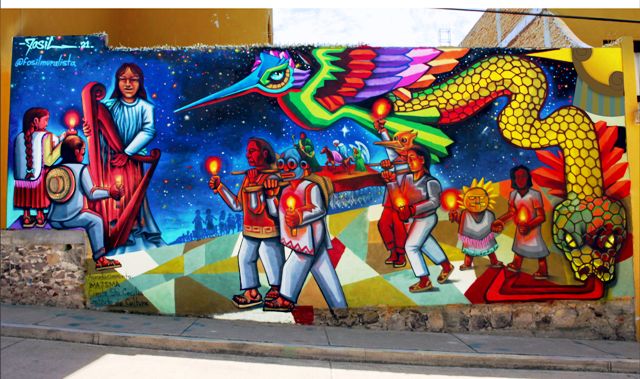 Mexican artist Fosil drives us deeper in to his latest mural creation in Guanajuato, explaining the deeper meanings of his symbolisms interwined with a historical and cultural background of a nearly forgotten ancient central American culture.

When interviewing the residents of the Santa Cecilia neighborhood, they agreed that the most deeply rooted tradition in this area is the posadas and that during these dates a greater social participation is generated, triggering a community work that the artist found very interesting because due to the pandemic, it has not been able to materialize this celebration lately.

This made me think about the origin of the posadas and made me imagine a reinterpretation of the play “Niños asking posada” that Diego Rivera made in 1953 at the Hospital Infantil de México Federico Gómez. I also began to travel back in time to know the origin of the posadas even before the Spanish arrived, this took me to 1580 and made me think of the original peoples who inhabited these lands the CHICHIMECAS, guamares and of course the MEXICAS who They called this land CHICHIMECATLALLI (land of the Chichimecas). 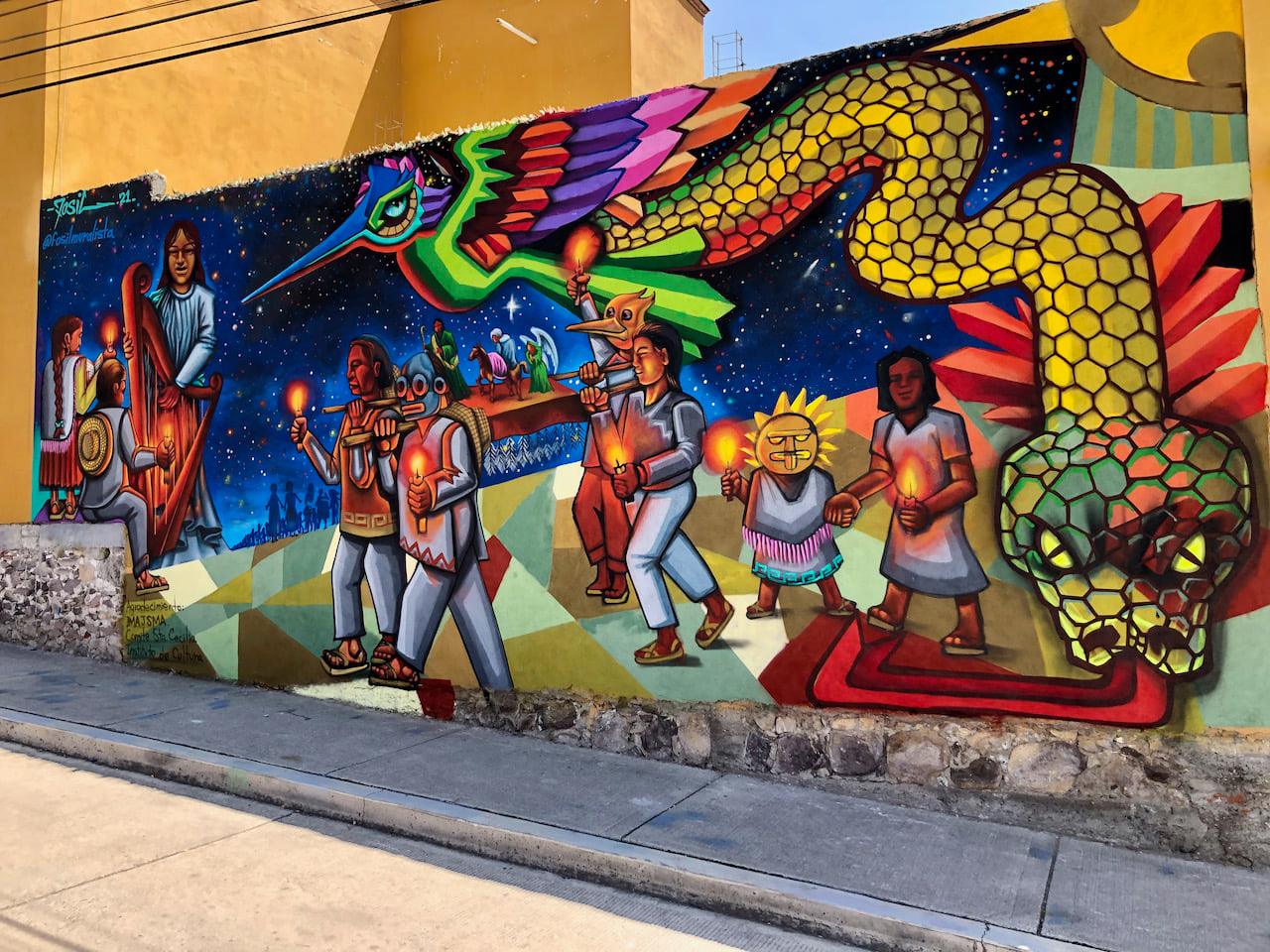 In the work, a group of people dressed in typical outfits of indigenous communities is observed since SMA is one of the municipalities with more indigenous communities in all of Guanajuato, this group of people walk in procession to ask for the traditional inn that is customary in times of seed and precisely coincides with the Birth of HUITZILOPOCHTLI who was born from the CLUATLICUE and was the main deity of the Mexica associated with the sun “TONATIUH” represented in the mural with a mask.

Huitzilopochtli is represented by a hummingbird in the upper part of the mural. Another element that characterizes it according to the codices is the serpent, which is reflected in warm tones to create a balance in the composition of the mural. 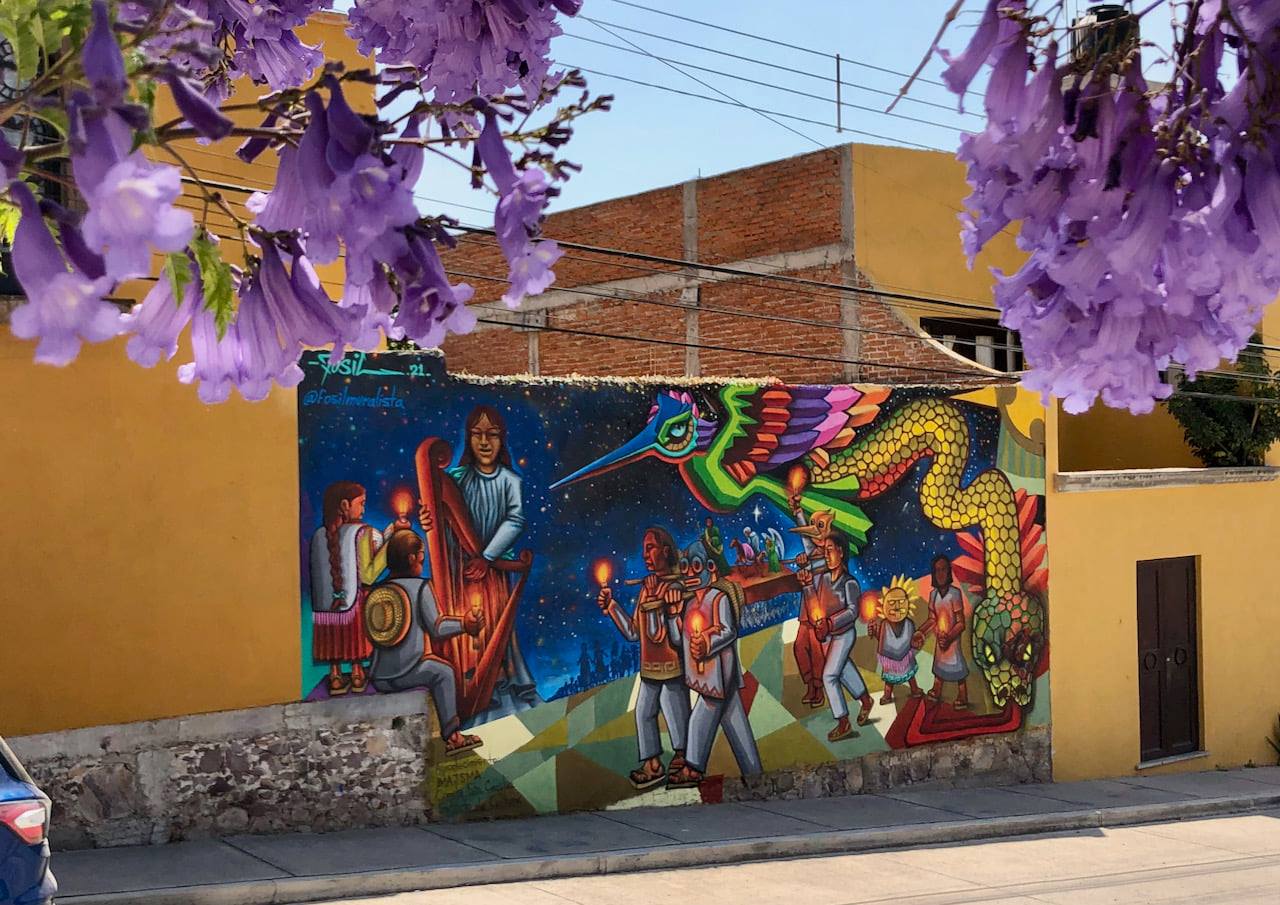 When the Spaniards arrived in Mesoamerica, he was the deity most worshiped by imposition of the Mexica, so it was easier to impose the Catholic religion represented by the mystery in the central part of the mural where Jesus, Mary, Joseph and the angel are the same these streets pilgrimage in the inns. Some pilgrims have their faces covered with masks alluding to Mexicanism, estimating admiration for some other deities such as TLALOC the god of rain, TONATIUH the god of the sun and the leader of the sky and HUIZILOPOCHTLI god of war who in MEXICA mythology orders the foundation de México-TENOCHTITLÁN in the place where the Mexica found an eagle (Sacred water and fire), which would have to be resting on a cactus, devouring the serpent among other characteristics. 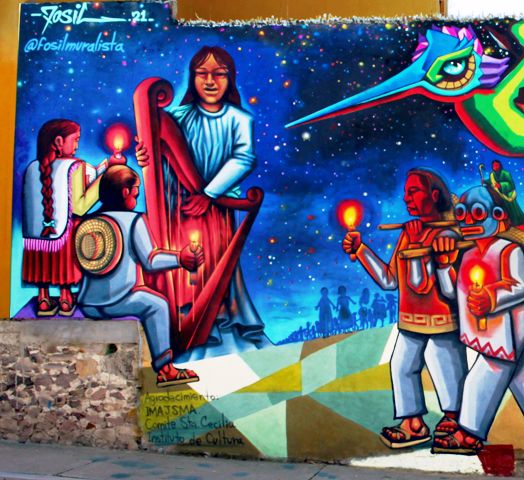 On the left side of the mural is the patron saint of this colony that bears her name, Saint Cecilia converted to Christianity and martyred for her faith, Saint Cecilia known by all as the patron saint of musicians, poets and the blind, represents her with these features that we appreciate in the mural, she is accompanying the children who respond to the pilgrims by reading the litanies.

In this fragment she wanted to represent her servant since as the inn is known on this occasion it is her servant the pilgrim muralist asking for a posada in San Miguel Allende hoping that they do not believe that it is some tunaaantteee and allow me to paint more murals here . 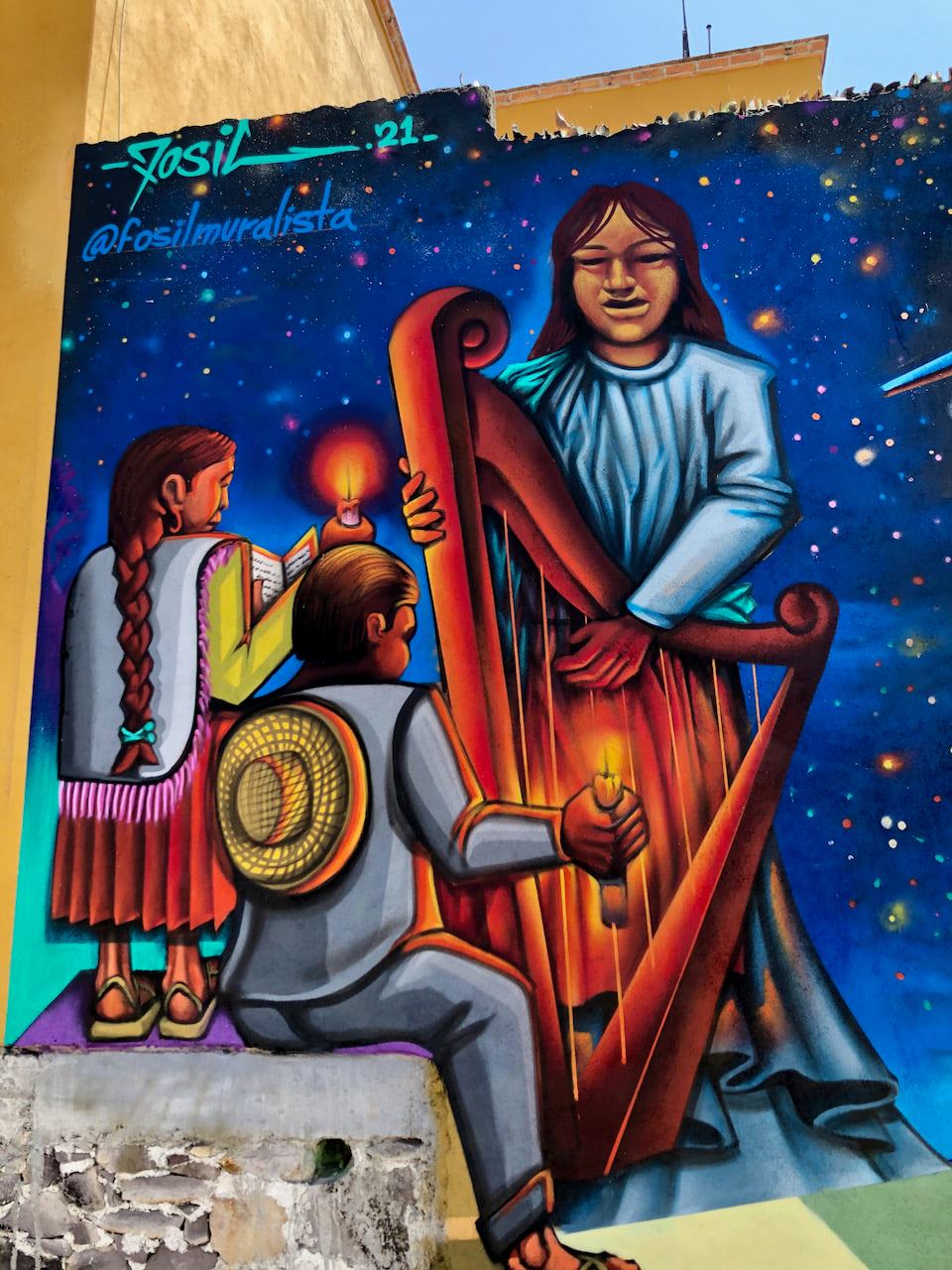 The candles that are used to illuminate the path of the pilgrims that include among other meanings: hope, faith, energy, harmony, etc …

As an architectural integration, carry out a preliminary study thanks to googlemaps where the color palette of the mosaics in the lower part correspond to the colorimetry of the houses on José María Correa street where this mural is counted and where from now on you will find its history, their identity, their myths, their legends and the pride of being from this beautiful land where San Miguel Allende was born.