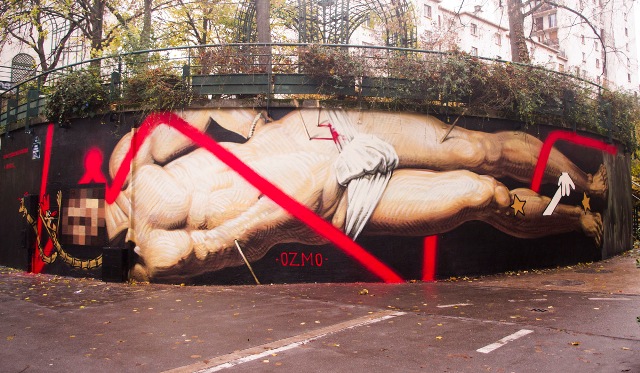 In the occasion of the Global AIDS Day (December 1, 2019) the CICERO association, Mairie12 in collaboration with the Center for Urban Art Fluctuart invited OZMO to create a new work in the 12th arrondissement of Paris. This artistic intervention is part of the Le Mur12 project, as a special initiative to create a dialogue about the subject and raise awareness of the cause. An artistic intervention, produced by Association Cicero, Mairie12 in collaboration with the Fluctuart urban art center.

The Italian artist is a forerunner of languages/mediums of expressions and styles, appreciated and recognized internationally for his research and his ability to create murals specific to the current place and time in order to build a dialogue with the local contexts and situations. For this particular project Ozmo managed to achieve the typical aesthetic characteristics of an oil painting, using spray cans in just over 4 days of creation of the ‘the Dream of San-Sebastiano’. 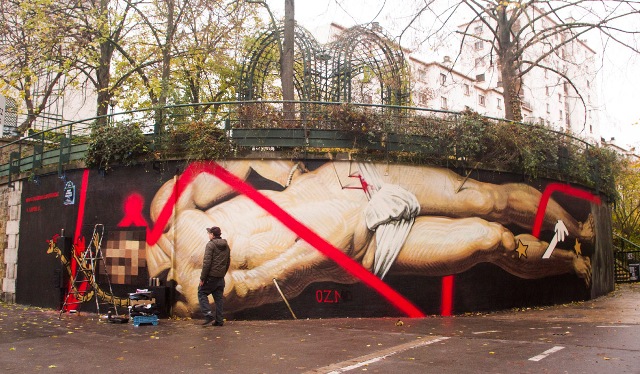 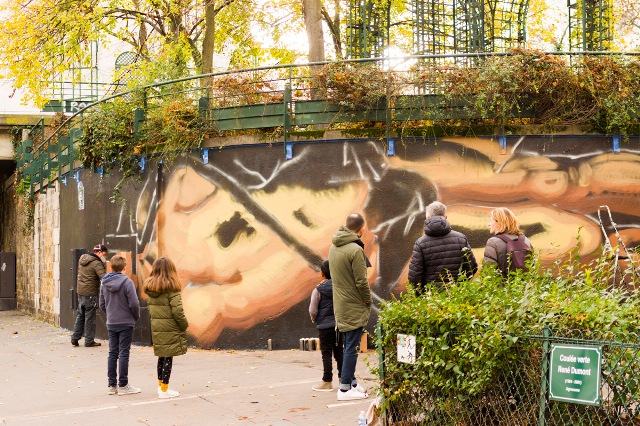 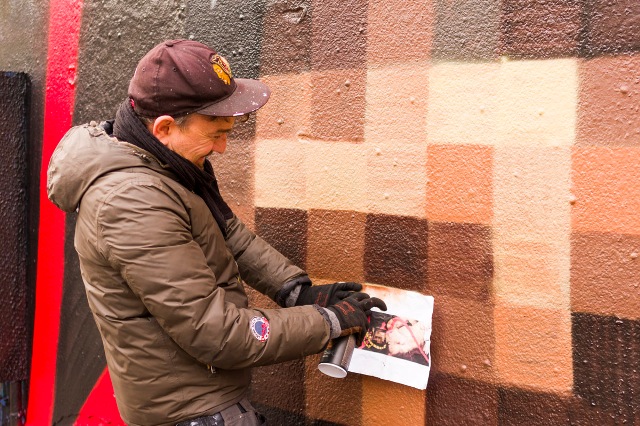 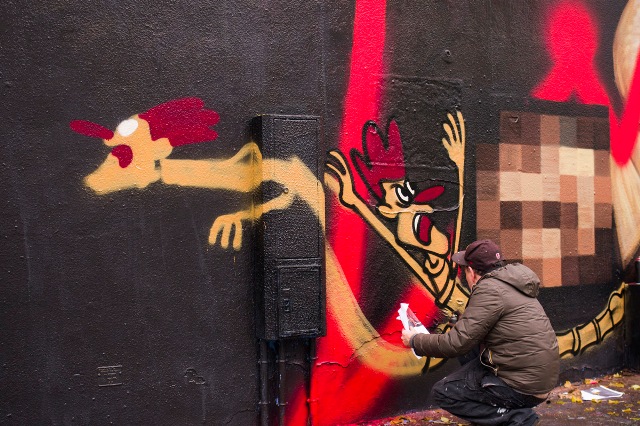 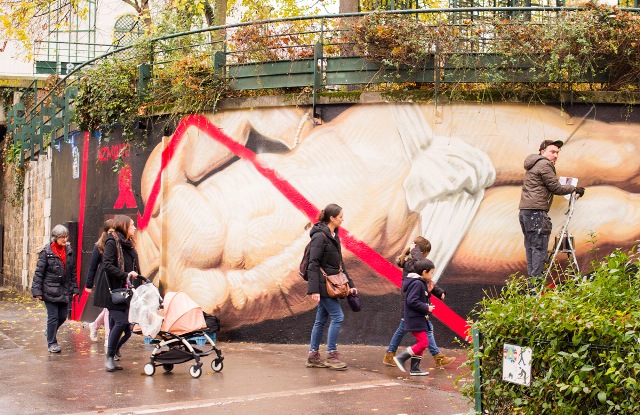 At the center of the pictorial scene he paints reinterpreting the Saint Sebastian by Rubens. The body of the Holy rescuer of the sufferers and protector against all viruses, once invoked for the plague and ultimately AIDS, is depicted lying down, within reach of passers-by. He is pierced by arrows, his attributes and allegories of contagions and epidemics, wrapped and crossed by a red thread like the blood that continues destructuring the entire composition. 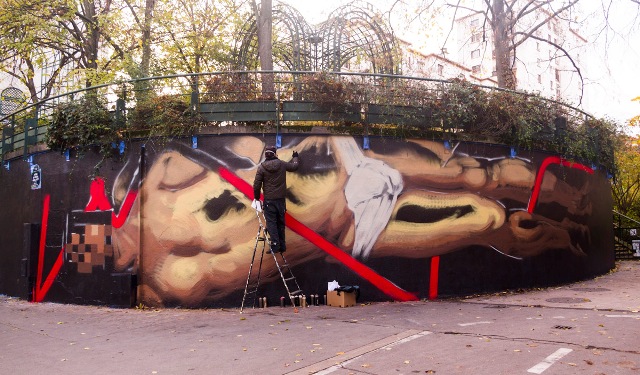 The pixel effect applied to his face on the one hand subtracts his subjective identity, and on the other hand
reminds us of the peculiarity of human suffering, as it is not excluding anyone. Two pop elements taken from a famous late 1980s French cartoon ‘Il était une fois… la Vie’ are closing the composition. They are viruses that flee chased by elements that in the comic strip represented white blood cells, the protectors of the human body.

High and low, sacred and profane, dramatic and playful tones, the horizontality of the compositional choice that suggests transversality and closeness, the reflections and short-circuits inspired by the quotations make ‘the Dream of San-Sebastiano’ an intimate and at the same time universal work , able to involve with its evocative power, an open challenge to the gaze that invites deep and complex reflection. 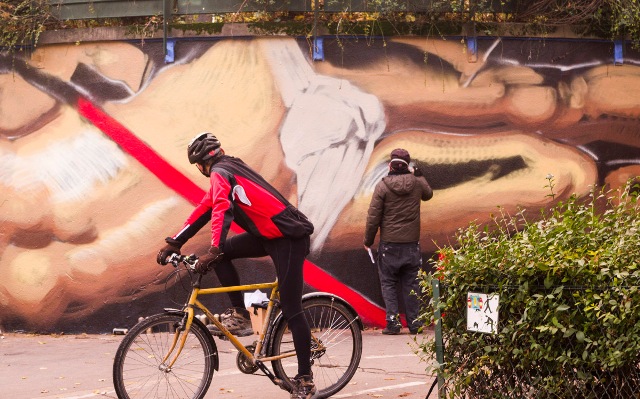 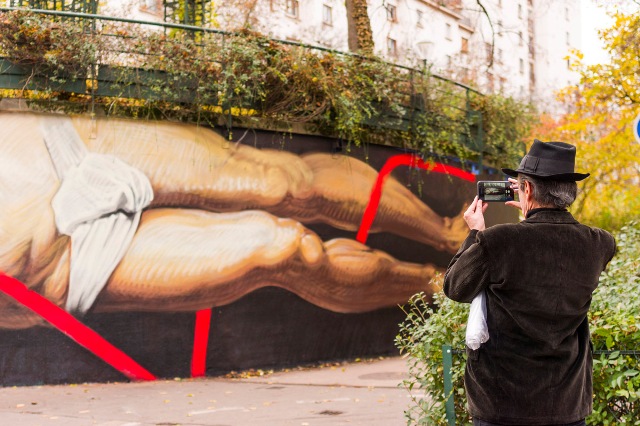 The mural was inaugurated on November 30 in the presence of OZMO and Jean-Luc Romero the deputy-mayor of Paris 12th in charge of culture, Knight of the Honour Legion, activist in the fight against AIDS for over 20 years and the first French politician who revealed having AIDS.

Le MUR12
The MUR12 is a project produced by a Paris based association CICERO in collaboration with the Mairie12 city hall. The aim of the project is to change the painting every two months to showcase different artists, styles, forms of
expression from all over the world and to educate and bring the public to discover more about urban art and build a dialogue between the invited artists and the community, a cultural bridge, an exchange. Since it’s inauguration two and a half years ago the project has showcased artists from Canada, Israel, Italy, Mexico (in collaboration with IPAF Festival), Sweden, USA, France etc.

Every year on the World Aids Day MUR12 does a special performance to raise awareness for the cause.
https://www.facebook.com/MUR12Cicero/
https://vimeo.com/user44122502
https://www.instagram.com/associcero/ 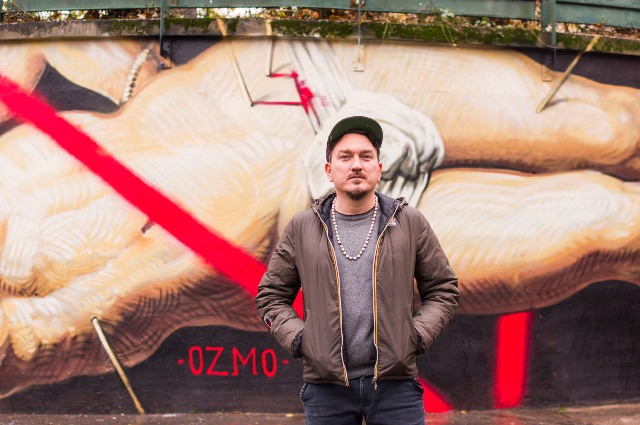 OZMO | biographical notes
OZMO was born in Pontedera, Tuscany, in 1975. After completing his education in Florence, Ozmo moved to Milan where he started to work with some art galleries, signing his work with his full name and publishing works of strong
pictorial connotation. In the meantime, he started to work in the public space, signing with the tag Ozmo. From this point on, Ozmo created the very bases of Italian contemporary street art, of which he is one of the pioneers and among the most famous exponents, also on an international level. Since 2003, Ozmo’s work has been a constant presence in the art system and in some important public museum collections.

Among his Italian exhibitions, we would like to remember Palazzo della Ragione (2005), Pac (2007), Palazzo Reale (2007), and his personal exhibition “Primo Piano D’Artista” at Museo del 900 in Milan and the creation of a permanent 14- metre-high mural on the terrace of MACRO Museum in Rome, in 2012. Alongside his institutional artistic activity, Ozmo works in the street art world in the most important contemporary and urban artistic capitals: Shanghai, San Francisco, New York, Miami, Chicago, Baltimore, London, Berlin, Paris, Moscow, San Paolo, La Habana, Beirut and in the most important Italian cities: Milan, Rome, Turin, Palermo, Bari and Pisa. Since 2015 he has been the artistic director of the international festival of muralism “Wall in Art | Walls of art in the Valley of the Signs In 2019 he was the first artist to be responsible for carrying out an urban art intervention on the outer wall of a court, in Rieti.