The new mural by Antonino Perrotta aka Attorrep is the first urban art intervention for LAOS – street art festival (in Santa Maria del Cedro, Cosenza, Calabria, Italy) which kicked of in February 2021.

LAOS, the itinerant urban art festival, continuation and regeneration of the original street art festival OSA Aroud, has repainted the historic center of Santa Maria del Cedro, with a grandiose work of art with a strong symbolic value. 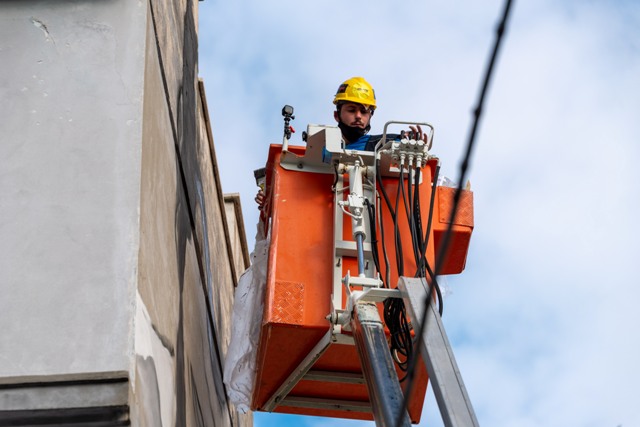 “Perì ‘etz hadar”, which literally translated from Hebrew means “the fruit of the most beautiful tree”, is the first urban art intervention of the LAOS project: according to Jewish tradition, in fact, it was precisely the cedar – and not the apple – to tempt Adam and Eve, causing their expulsion from Eden. And so it was that God indicated cedar to Moses as a plant to use for the traditional festival of booths or Sukkoth.

The cultivation of cedars has a very ancient history, dating back to over 2000 years ago. The best cedars are currently grown in the area identified as the Riviera dei Cedri, right in Santa Maria del Cedro. And it is here that, since ancient times, rabbis with beards and kippahs from all over the world have come to select the “sacred fruit” which will then be used to celebrate Sukkoth, remembering the huts that the Jews built during the journey to the Promised Land.

“Perì ‘etz hadar” is the image from which the LAOS festival starts and comes to life, celebrating the marriage between two extremely different cultures but linked for centuries, by an indissoluble thread.

Creator of both formats (OSA and LAOS), promoter of a culture aimed at raising awareness through art on respect for the environment, history and belonging to one’s own territory, Antonino Perrotta aka Attorrep is the well-known Adamantine artist who, creating the first two murals for the Calabrian town, he starts the brand new and promising urban art festival called LAOS.