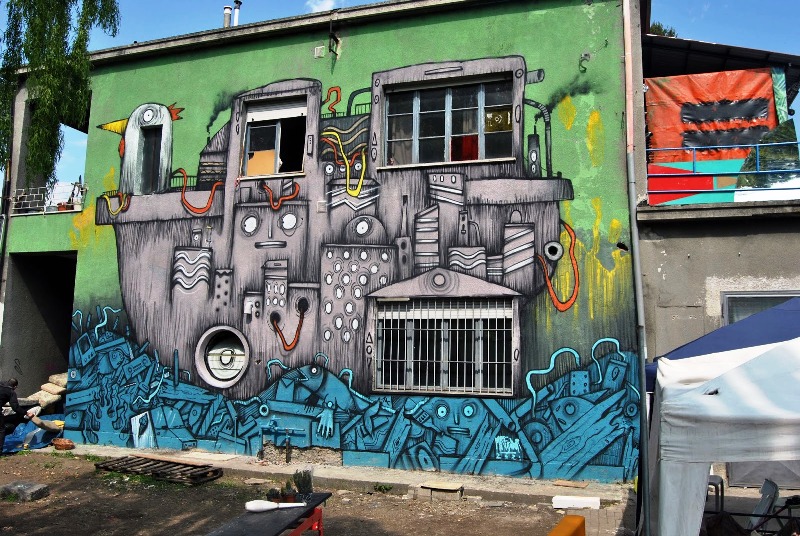 Mrfijodor is back to art after a required stop for the pandemic emergency and he said welcome to spring with a new cycle of pieces around Italy and Europe.

“Urban Boat” @ Turin (Italy) for the “Collettivo Barca” – Dedicated to the value of home, travel and cooperation “Urban Boat” is a work Mrfijodor painted on the outside wall of the “Collettivo Barca” headquarter at Parco della Confluenza in Turin. The piece was born from a creative and mental “journey” together with the collective members to highlight the value of the house as such and its importance not only in the cities but also in our daily lives.

Cloud Of Chaos @ Torino (Italy) x MurArte Torino – On the occasion of the first weekend – May 22nd-23th 2021 – MurArte Jam 2021 / Urban Art Convention Bramante, Mrfijodor creates a chaotic and spontaneous artwork. The wall depicts a large cloud of rubbish that threateningly overlooks a bulldozer with human expressions intent on saving a man-swordfish, in the context evidently the only living being left in what seems a complete chaos of waste. MurArte is a Project of the City of Turin, born in 1999 to promote muralism, street art and graffiti on the city territory. 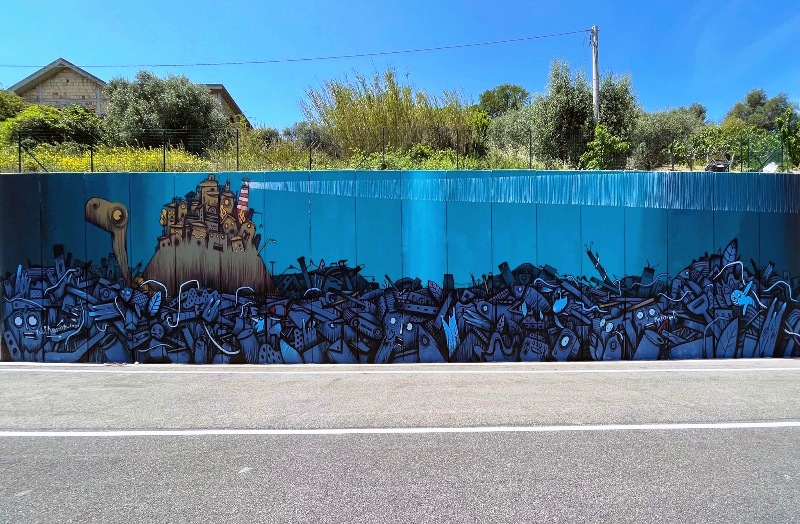 “Bip Trip Chic” @ Pulpa Festival, Montesilvano (PE, Italy) – Mrfijodor was involved in the first edition of Pulpa Festival, a traveling festival of Urban Art, music and street food in Montesilvano, Abruzzo – south Italy. The theme was the environment as a landscape and a place to admire, live and take care of. For the occasion Mrfijodor created “Bip Trip Chic” (20x4m): an island with the appearance of a turtle in a dark ocean full of waste. The animal-island is a symbol of slowness, understood as opposition to the unbridled consumerism that characterizes our lives. And despite the depth of the sea of waste, the turtle looks hopefully beyond this “stormy” and the lighthouse on its shell illuminates the horizon as an incentive not to give up on new and more conscious choices in our daily lives. 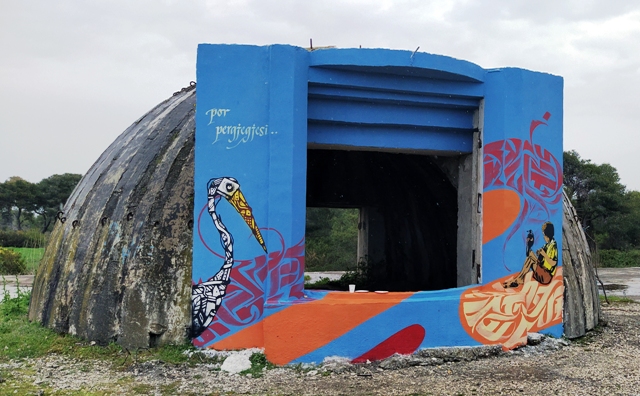 ACAP Project @ Valona (Albania) – Mrfijodor was called, together with Checko’s art and Davide DPA (167/Street crew), to participate in the ACAP project – “Community Action for the Conservation of Protected Areas in Albania”. An initiative aimed at protecting the artistic heritage, the promotion of protected areas and the development of a new sustainability – economic and social – in the areas of Vlora, Gjrokaster and Berat. And right in Vlora, thanks to the subgranting fund CAF – Community Action Fund -, Mrfijodor realized a series of interventions on some bunkers present at the end of the nature trail of the Protected Area of Vjosw-Narte. The works represent a clear message to a conscious use of waste and the safeguard of fauna. Vlora is also the scene of another intervention realized in combo with Checko’s art and Davide DPA at the abandoned industrial plant of Ish-SODA. This is one of the areas most affected by the de-industrialization that has affected the whole country in the last 30 years. The industrial crisis and depopulation have led to a situation of progressive abandonment, along with environmental and social problems. The wall in addition to redevelop the area has the goal of increasing urban and city awareness of the environment and how much importance it has on our lives.

About Mrfijodor
Mrfjodor, alias Fjodor Benzo. He tried for years to use a tags like all writers, but in the end he settled for his own first name. A child with a strong creative streak, he started off building monsters with LEGO and drawing on his bedroom walls. In recent years its production has been very diverse, ranging from installations to thematic murals, but also performance and graffiti, dealt with since ‘94. Produces works whose subjects are usually elementary forms which convey direct messages and ironically responsible; based on a simple interpretation, for always being able to converse with the user. Very often, his works are marked by a social or ecological criticism, using as a weapon a smile childishly astonished and spontaneous and direct style, free from complex technical elements.