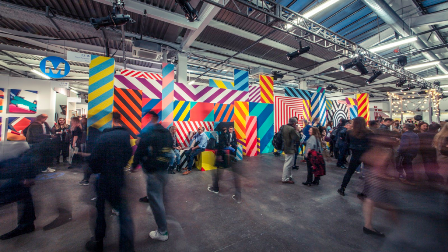 Moniker International Art Fair announced it will debut a New York City edition during New York Frieze week, open to the public May 3-6, 2017 at Greenpoint Terminal Warehouse in Brooklyn, NY. After Eight successful fairs in London, Moniker adds a second fair to its annual roster.In the United Kingdom, Moniker has established itself as the leading fair dedicated to Urban Art and its related subculture, bringing together these genres’ most influential galleries, well-established names, and emerging voices. Founded by in 2010, the fair has grown to its current prominence under the leadership of Fair Director Tina Ziegler.

“Moniker has dedicated its eight-year history to championing urban art in the UK. It was only fitting to present our first international edition in Brooklyn, a place revered and respected as the home of urban culture. We’re thrilled for the opportunity to be a part of the NYC art fair circuit, and to bring London’s community of artists and galleries to new audiences as part of our expansion” said Ziegler.

Known for producing thematic fairs, Moniker inaugurates its stateside edition under the theme of the carnival. Embracing the carnival’s interactive, immersive, and participatory elements, Moniker’s 2018 New York debut will offer a sensational environment for visitors to appreciate the excitement of this variety of work.

The 2018 presentation will exemplify the fair’s commitment to exhibiting the depth and breadth of street art and related movements. As the fair continues to add additional exhibitors to its roster, select highlights of participating galleries include StolenSpace Gallery, London; Curious Duke Gallery, London; as well as Station 16 Gallery, Montreal. Moniker’s U.S. edition will offer a unique opportunity for American audiences to experience the highest quality of New Contemporary and Urban Art from an international perspective, connecting a strong American collector-base with many European galleries that have never before presented in the United States. Many U.K. galleries will be exhibiting at Moniker for the first time, marking a robust expansion in the fair’s program.

Greenpoint Terminal’s industrial, warehouse aesthetic and open floor plan provides an ideal context to present the diversity of work to be displayed at Moniker. Located in the heart of Brooklyn, the surrounding Greenpoint neighborhood boasts a number of highly regarded galleries, delicious eateries, and hip retailers.

Now in its 8th year, Moniker Art Fair aims to spotlight emerging and established talent from a burgeoning and increasingly diverse contemporary art movement forged by its subversive and innovative spirit. Staged for the first time during New York’s most important art week in May, Moniker International Art Fair attracts some of the most talked about artists, galleries and collectors from the finer side of the street art movement and its related subcultures.

Moniker rallies against the familiar grind of the art fair season with a curated, experiential and immersive focus, creating unique settings for the display of artists and their work. With a proven track record of delivering a rich and varied program since its formation in 2010, the fair has grown significantly since its inception both in terms of audience and relevance.