Portuguese curator Catarina Valente talks with us about the present, past and future of her projects.– Introduce yourself to us.

My name is Catarina Valente and I was born in the city of Amadora, Portugal. I have a degree in Sciences of Culture and Communication by the Letters Faculty of Lisbon as well as a Master in Culture and Communication by the same university. I started to be involved with street art during my degree as I became interested in photographing urban murals, especially, in my hometown. As one of the most important cities in this regard, from political muralism to street art, Amadora hosts more than 100 urban murals. Later, during the investigation for my thesis about public art and female street artists, I founded the digital platform “Map of Graffiti in Amadora”, which displays a visual collection, online and free, of urban murals from the city of Amadora, based on my curatorial research and fieldwork. In 2015, I founded “Conversas na Rua” (“Dialogues on the Street”), in a partnership with Amadora’s City Council, a project that encourages the dialogue between local communities and street art expressions. Parallelly, I am doing a PhD about the relation between street art practices, new media, and online curating, at Lusófona University, Lisbon. I also work as a content producer and storyteller to several Portuguese brands. 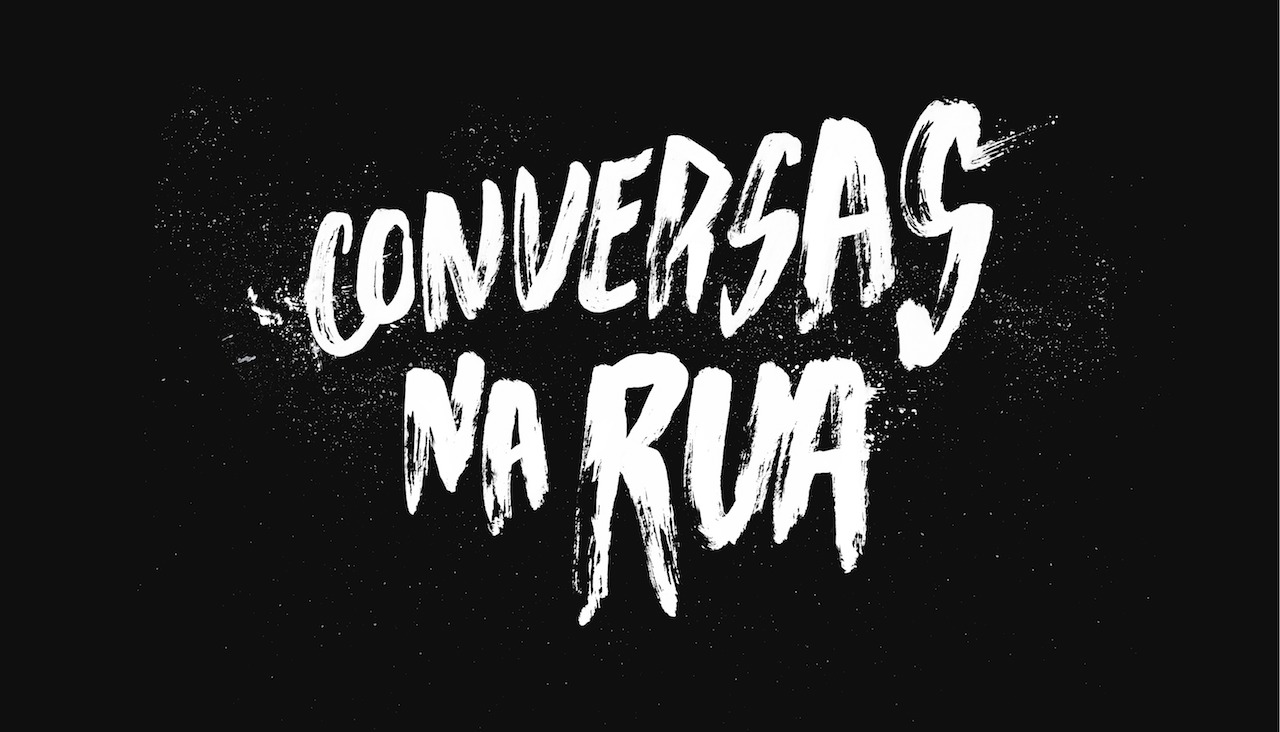 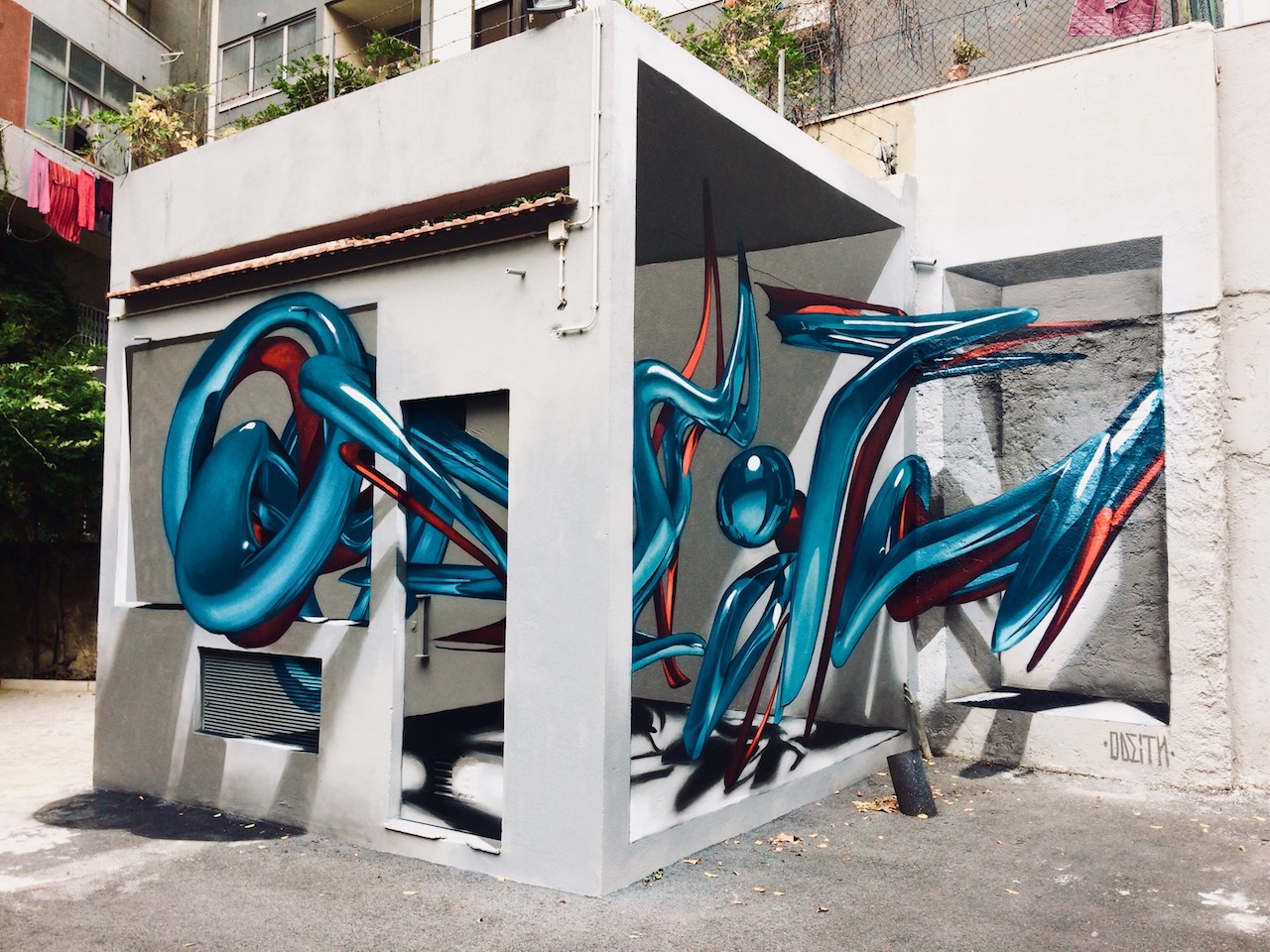 – What is street art for you? What impact has it had in your life?

I started to be interested in street art during my degree. I was deeply influenced by the city environment and the way people interacted with public space and the urban furniture. It always fascinated me how people expressed themselves on a wall or a subway tram, through different kinds of approaches: artistically, politically, or personally. At my point of view, the streets are the most available place: apparently free and open to host our fears, beliefs, or just vents. With street art all this became much more alive and the city turned out to be a creative stimulator. In my hometown, Amadora, this kind of manifestation is very present, since the 1980’s. First, with the political murals, and later with graffiti and post-practices. As I investigated more the origins, motivations, and models of participation, I became aware on how these movements awakened the city by questioning and confronting its structures, shapes, landscapes, and so on. If there is a key issue these expressions raised through their practice is the need to look into ourselves and to how we portray ourselves to others, and how the city reflects both these dynamics. 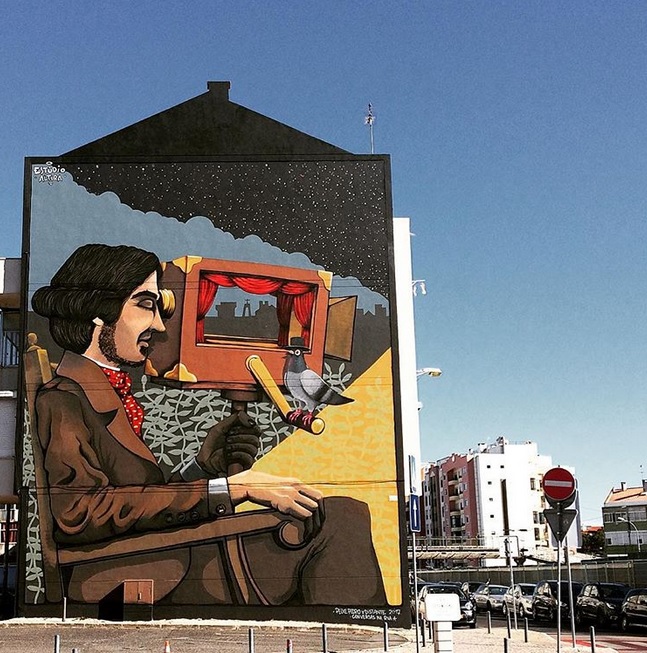 During my master’s thesis I did not want to take forward an investigation about something that did not affected me personally and professionally. After a confrontation with the work of some of the local artists in my hometown, I saw an opportunity to explore their art through their voices and perspectives, so I started to take pictures of their works across the city and gather a collection. Then, I interviewed some of them and I heard their background, their inspirations, their personal journeys and I was surprised by how the city, with its contexts, urban planning, and social environments, influenced so much their work and their approach to/of art. At the same time, when I was collecting all this material, I thought that my local council should be aware of the importance of these visual narratives and how local artists were portraying them everywhere. Therefore, I proposed to build a digital platform, hosting all the photographs, testimonies, and the investigation I took forward, giving rise to the project “Map of Graffiti of Amadora” and the short documentary “Speaking Walls”. As I launched the platform, I started to think of an idea for a project encouraging some of the local artists to give their visual contribution to the city in a larger scale and how their narratives could engage the community. In 2015, “Conversas na Rua” (“Dialogues on the Street”) was born, leaded by Odeith, as the local artistic ambassador, and a group of emergent and renown artists, from illustration, fine arts, comics, graffiti, and street art (The artists from all the editions: Odeith, Nada, Damn One, Elsa Poderosa, Ana Dias, Regg, Gonçalo Mar, Sara Morais, Hugo Lucas, Alecrim, Kruella d’Enfer, Frederico Draw, Contra, and Estúdio Altura). This continuous to be our goal as we improved our local impact through the workshops, ateliers, and how we dialogue with the historical, cultural, and social heritage of the city. 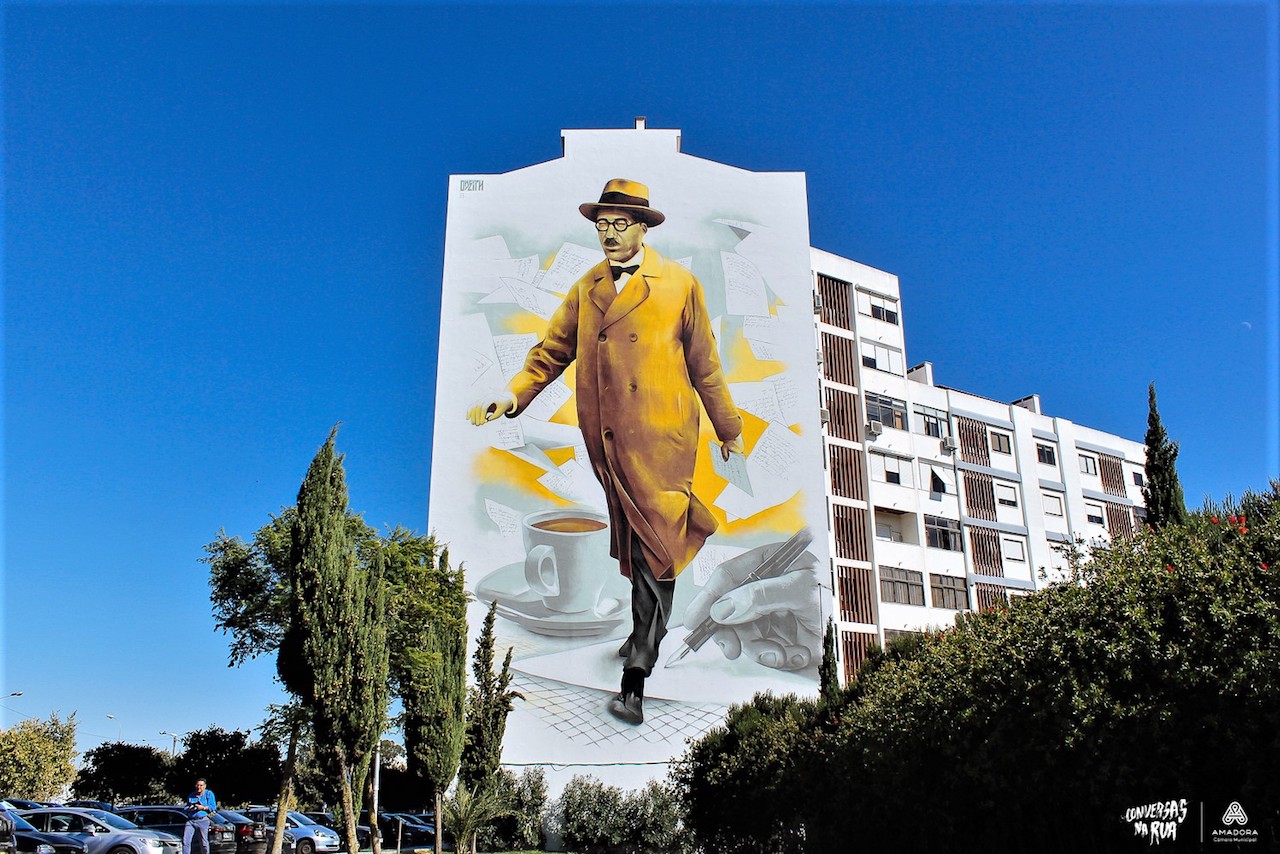 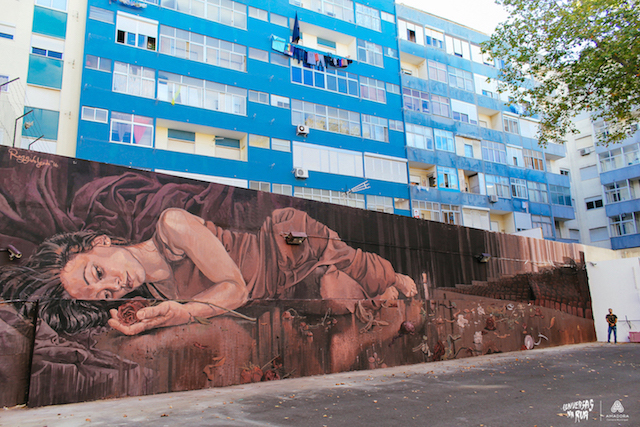 As a curator, my personal taste tends to look after different, introspective, and critical artistic approaches. I appreciated how some of the artists do not fear to mix styles, media, languages, and materials in their work. In Portugal, I admire the work and uniqueness of all the artists that collaborated with our project, of course. And I feel very proud for challenging them to leave their comfort zone and to experience art in public space, despite not being their home ground. For this reason, I do not work only with street artists, but also with illustrators and painters, because I believe art in public space should be plural and celebrate diversity of media, languages, narratives, and visual perspectives. To answer your question, I would say that the journey of Pantónio, Eime, Vhils, or Violant, for instance, is worth a look at. Internationally, also in street art, Milu Correch, Hyuro, Aryz, Artez, Mantra, Maya Hayuk, Axel Void, Fintan Magee, and AEC.

– Street art in the last few years has had a big impact on society, a lot of artists being in the spotlight and trying to make a career out of it. What do you think about this evolution?

I think this change responds to the nowadays world of art. With the impact of technologies and social networks in the last few years, the art market has been under deep changes in its structure, mostly, after the audiences started to be more participative. With the digital platforms, artists became more independent at exhibiting and displaying their work. Previously, they needed to be enrolled in galleries, museums, and other institutions to belong to the community and to be appreciated by the public. Today, those barriers softened, and they have more control and autonomy over their work. However, there is also a reversal surrounding this recent framework, since most of the art produced by renown street artists is to be considered as commodities, instead of works of art. As street artists become trendy, their products turned to be sought-after objects for the masses, which tends to reduce their value. At my point of view, sometimes the mass reproduction of those objects puts in danger their credibility. That’s why I believe it is more than ever important how the artists position themselves and how they manage their career, so that they avoid being “swallowed” by the industries surrounding them. 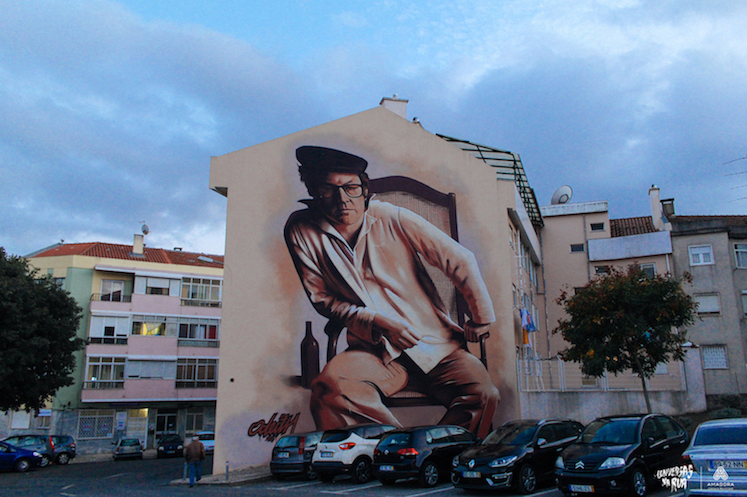 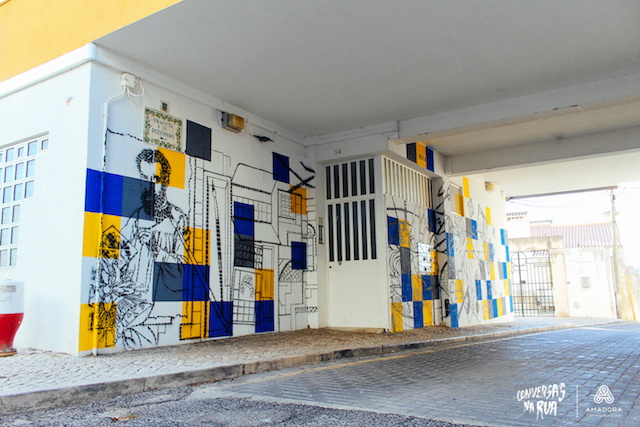 – Which cities do you think have the biggest activity and influence in the global street art scene?

Fortunately, there are a lot of cities across the globe stimulating, investing, and developing projects that not only enable street artists to show their work but also help to implement sustainable models for the future income of the communities targeted – these are the projects that I pay more attention to, especially, those that articulate also with the education institutions. Lodz is an example of that, involving also the academic researchers to encourage the discussion and reflection about these artistic practices. But also Stavanger, Berlin, Philadelphia, Georgetown (Malaysia), etc. 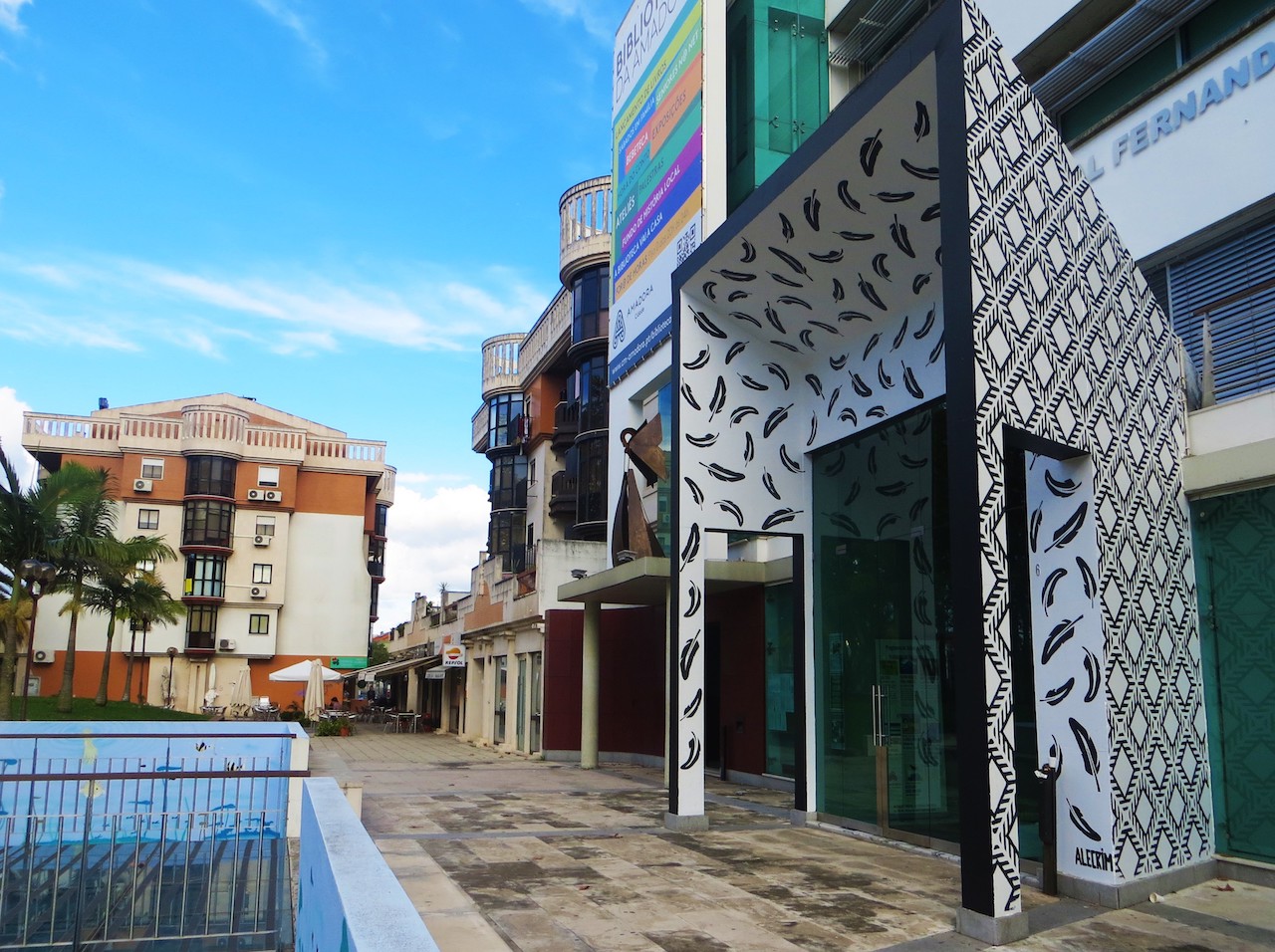 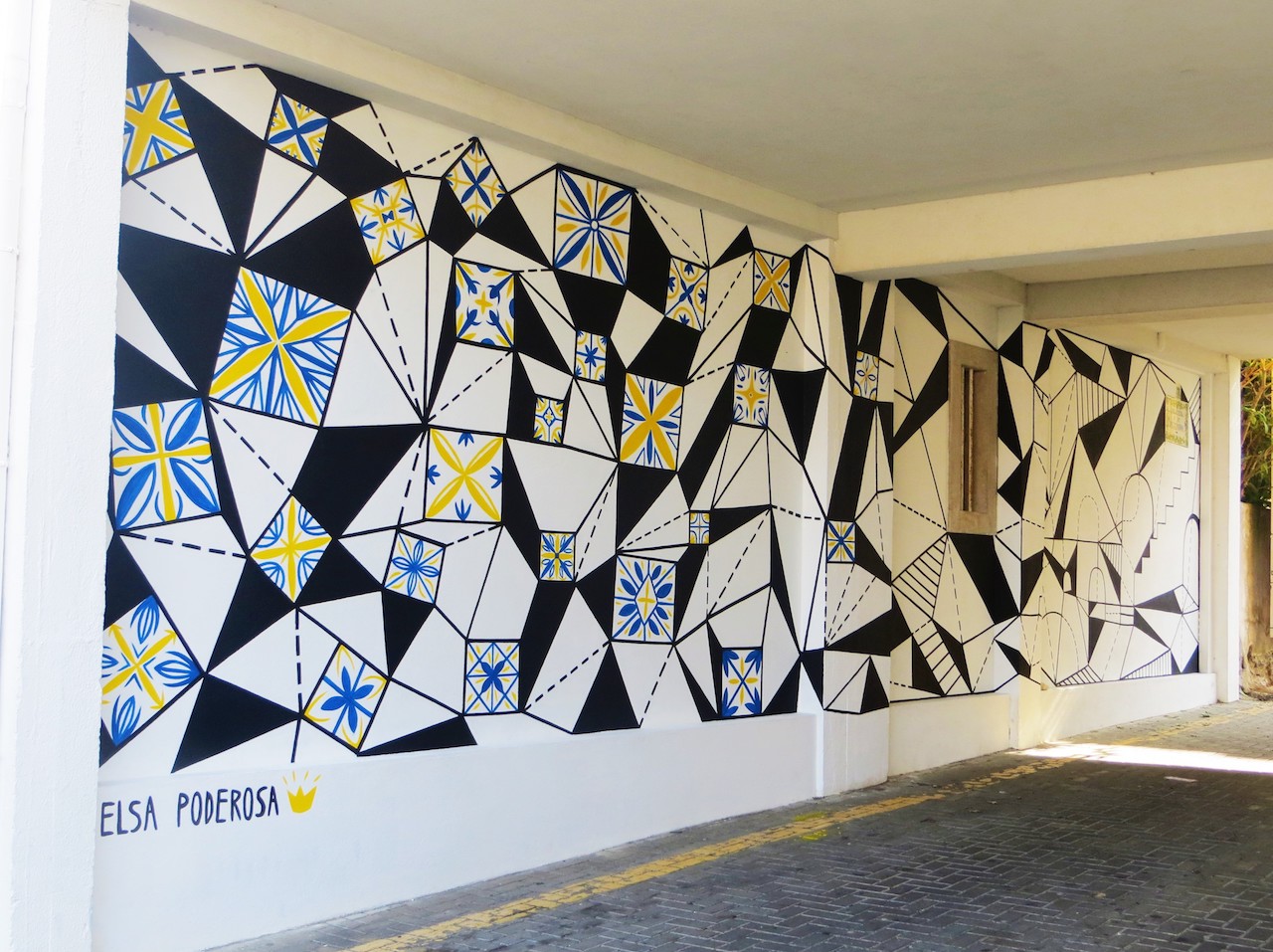 Nowadays, I am working as a curator and project manager of “Conversas na Rua” (“Dialogues on the Street”), which is going to its 4th edition. At the end of 2017, the city of Amadora displayed more than 15 public artworks, under this project. I am also planning other events related with street art, namely urban poetry, urban performance, etc, which will be launched during 2018.

– What is the biggest challenge when organizing a festival?

Considering a project like “Conversas na Rua” (“Dialogues on the Street”), in every edition we face some difficulties and unexpected events. Thinking about these past three editions, I would say that the articulation between all the stakeholders is tricky and it requires an accurate mediation to achieve an agreement between all the interested parts. The logistic process is also problematic, especially, when you need to match the artists’ agenda with the partners expectations and deadlines. 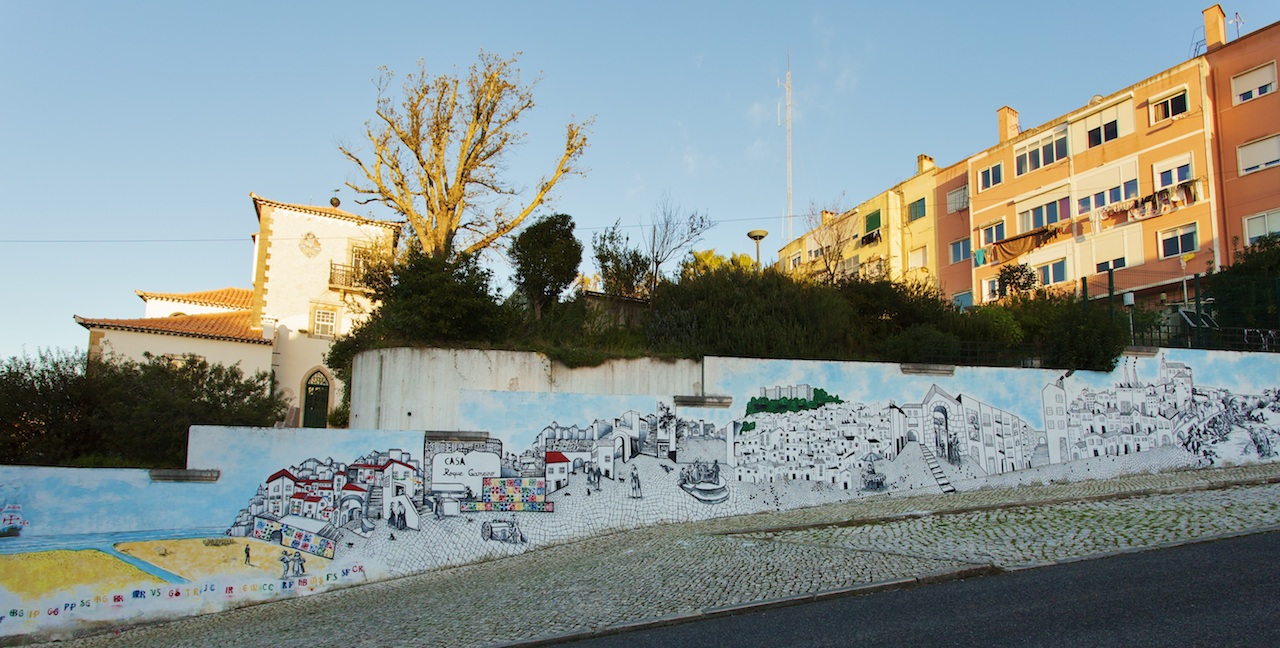 I would say problems with the rented logistic platforms. Unfortunately, the companies renting these kind of equipments are not used to work with artists and under these kind of projects, so they are not as helpful as we wanted them to be. Thankfully, the artists working with us so far were positive and proactive, allowing us to go on as planned. On the other hand, there is the authorization process and mediation with the owners of some of the places we wanted to intervene. This process sometimes delays and even suppress the opportunity to take forward our ideas. At this regard, mediation has been our asset. 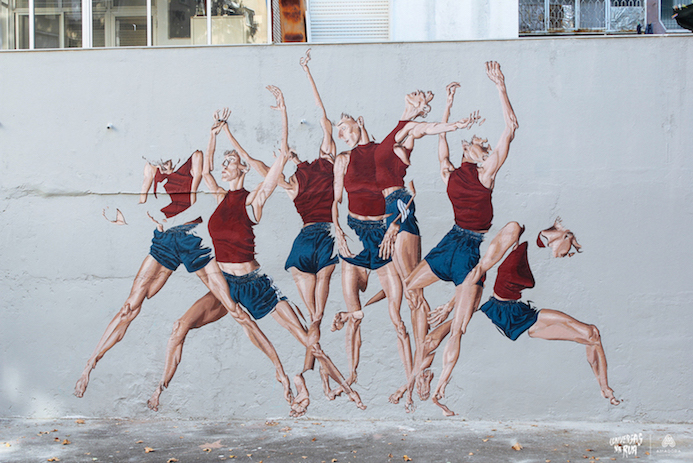 – Do you have a wild project that you dream of achieving some day?

Yes! I am a full-time thinker and I am always coming up with new ideas for projects. In a closer future, I believe I will be able to put them into practice – so please stay tunned! 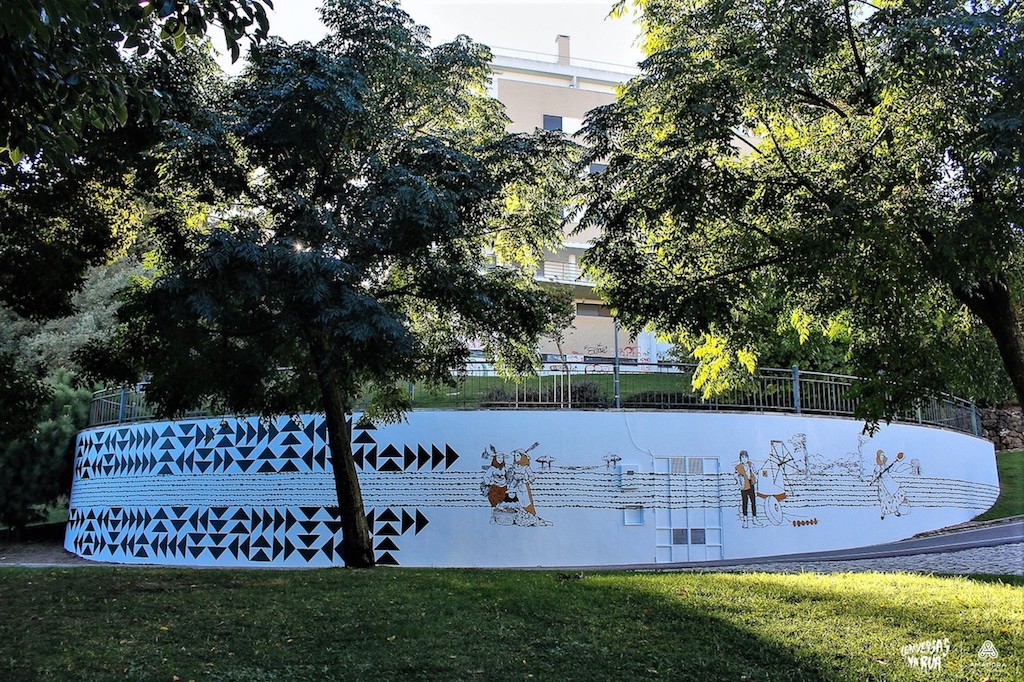 – What are your plans for the future?

For the future, I would like to continue to pursue my career as a curator and cultural manager. I plan to continue investigating this field of study and stimulate the reflection and discussion about street art expressions. I intend to engage more effectively the local community into my projects. And I am also committed to enhance the potentialities of “Conversas na Rua” (“Dialogues on the Street”), expanding its areas of interest to wider artistic, performative, and social possibilities. 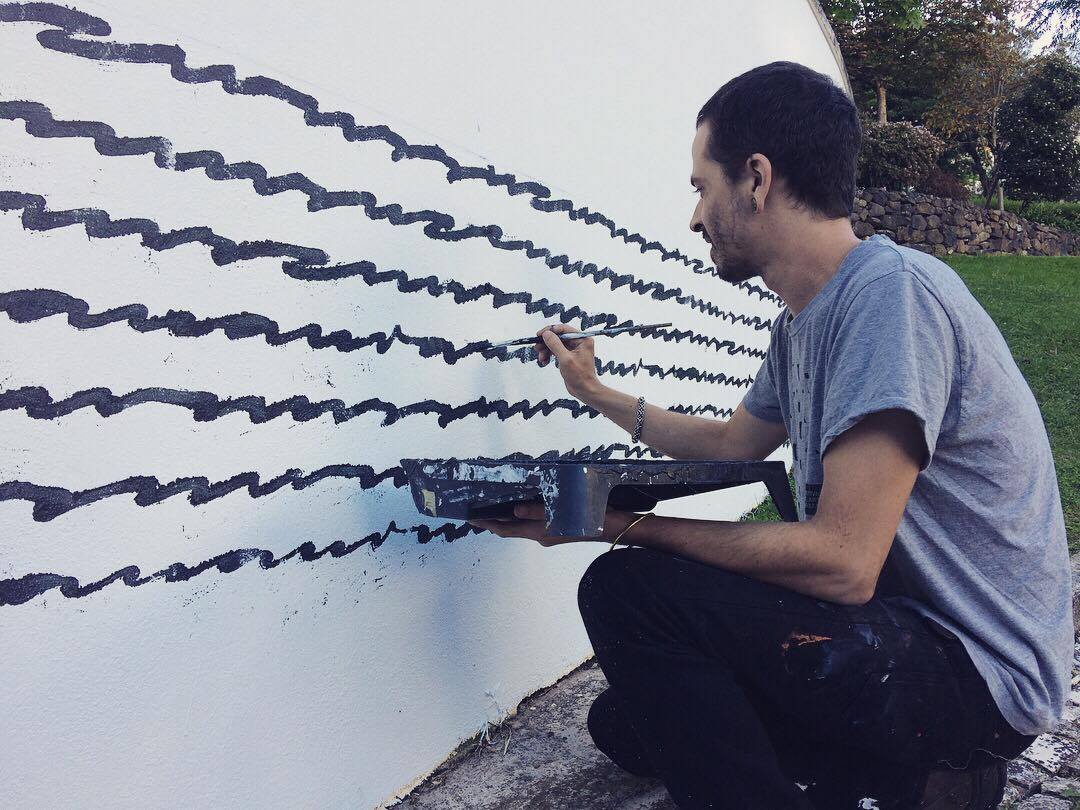 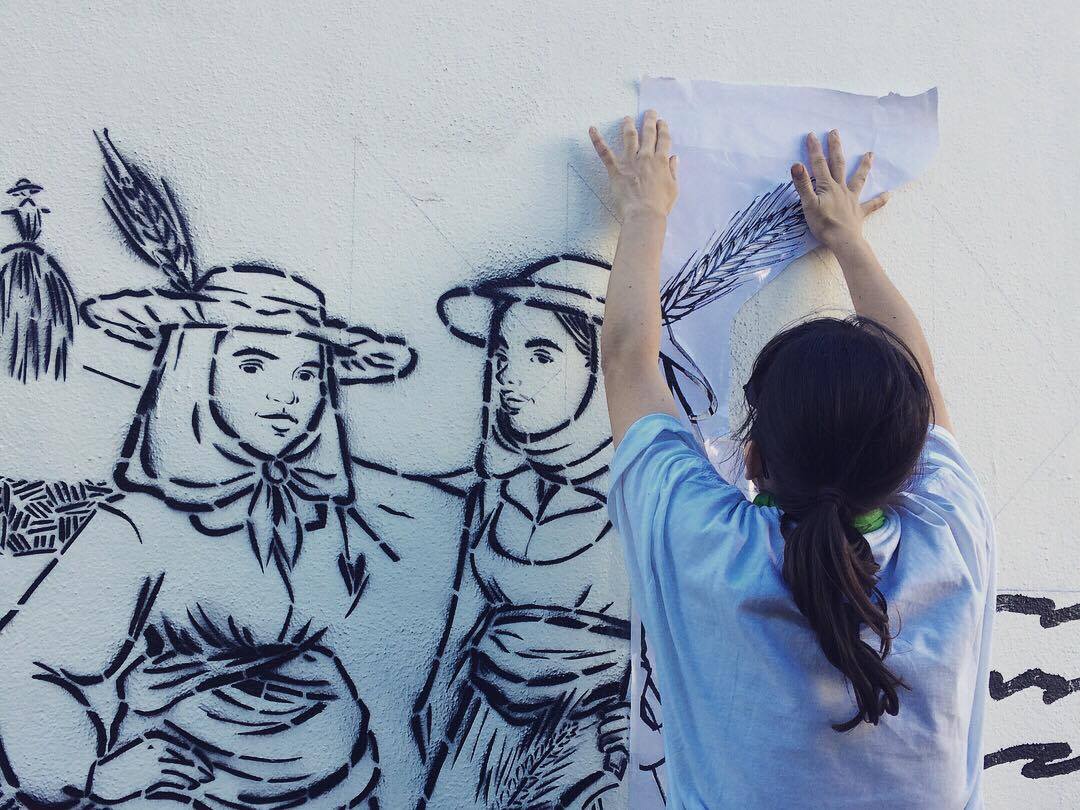 The public space needs everyone and our participation determines the city of tomorrow. So, we should all be experiencing the outside to learn more about our inside. At this regard, my goal meets Suzi Gablik’s quote: “Art that can only come into its own in dialogue, as open conversation” (Gablik, 1992). 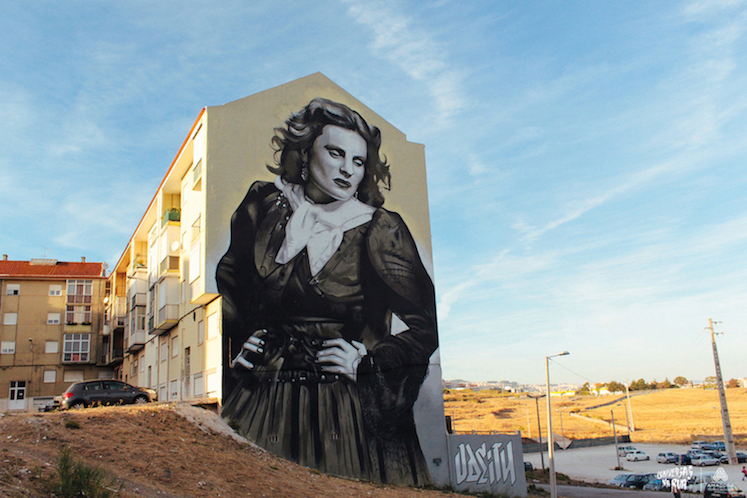 Thank you Catarina! It’s been great to get to know more about the mind and person behind such great projects.