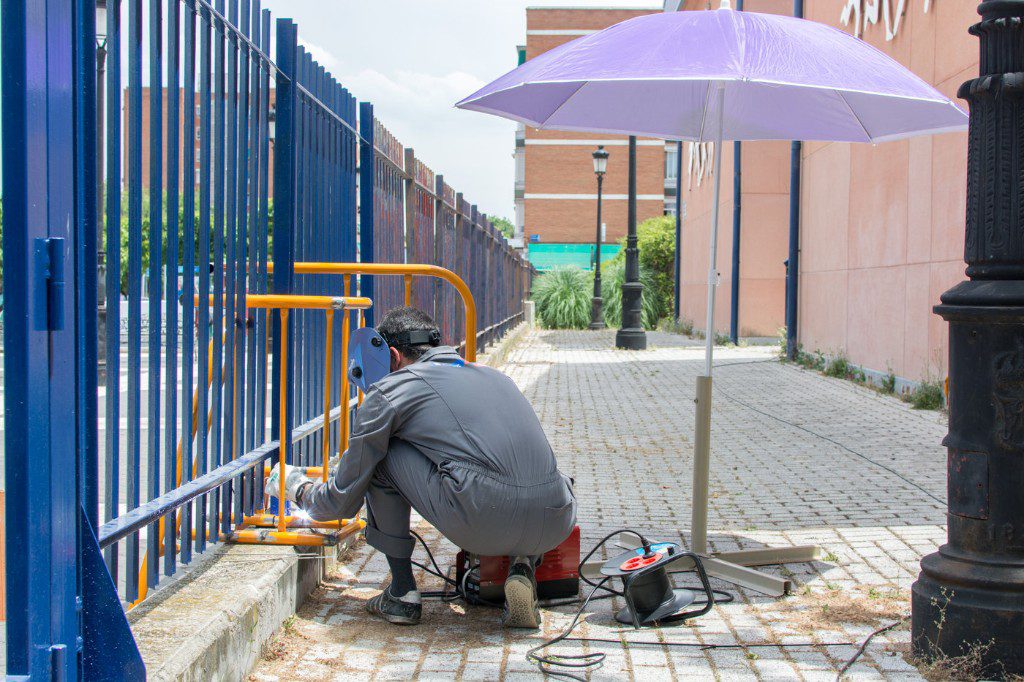 Last June we had the chance to work again with Ampparito, in a project launched and supported by the city council of Leganés, a city near Madrid.

From the beginning, all of us wanted to develop a project which focused on and played with the context of the Centro Municipal Ramiro de Maeztu, taking into account not only the physical or architectonic aspects but also the history and uses the building has had since its foundation as an elementary school until its conversion into what it is now, a public, administrative and also social center. 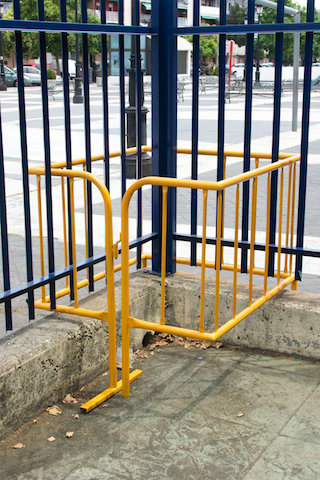 As so many times before, playing with confusion and surprise has been in the origin of Ampparito’s intervention, but “About protection and minus times minus is a plus” has also focused on the creation of new meanings for elements (fences in this case) which have unequivocal functions and connotations. During one week, Ampparito developed a sculptural work using a radial saw and a welding machine as his sole tools and creating three new fences, unique and different from those we can see in the streets but at the same time fully recognisable. 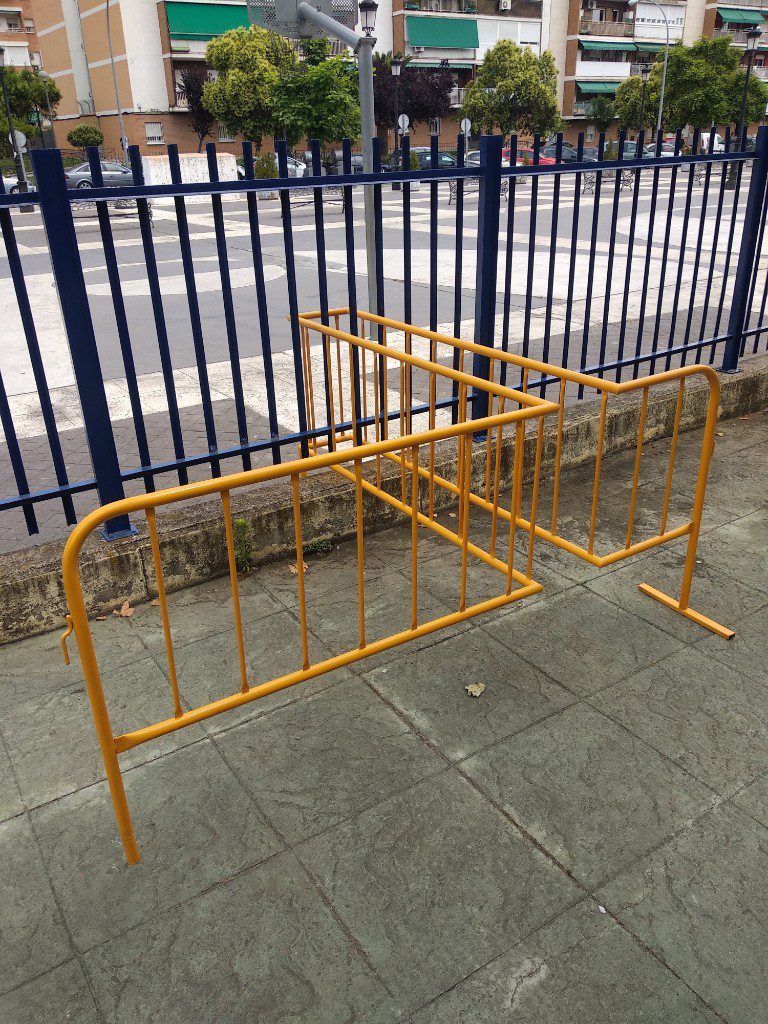 Ampparito puts this way in his own words:

My last project took place in Leganés, a working class city close to Madrid. In the first meetings Jorge showed me the area where we would work. In the past had been a primary school, an orange brick building with blue doors, a fence surrounds this construction to demarcate playgrounds and avoid kids to escape from the school.

Nowadays, as a reflection of the neighborhood, this building is a place for social associations and public administrations. At the beginning the idea was to offer spaces for all kind of association but after few years the only people who frequent it are elders. This is quite poetic because all them were working population around 30 years ago and their sons attended to the school in the same place where they play cards and spend everyday. All those fences that avoided kids escaping from school, now work in the opposite direction, dissuading the same kids who grew up and are in theirs 20s and 30s from getting into this place for old people. 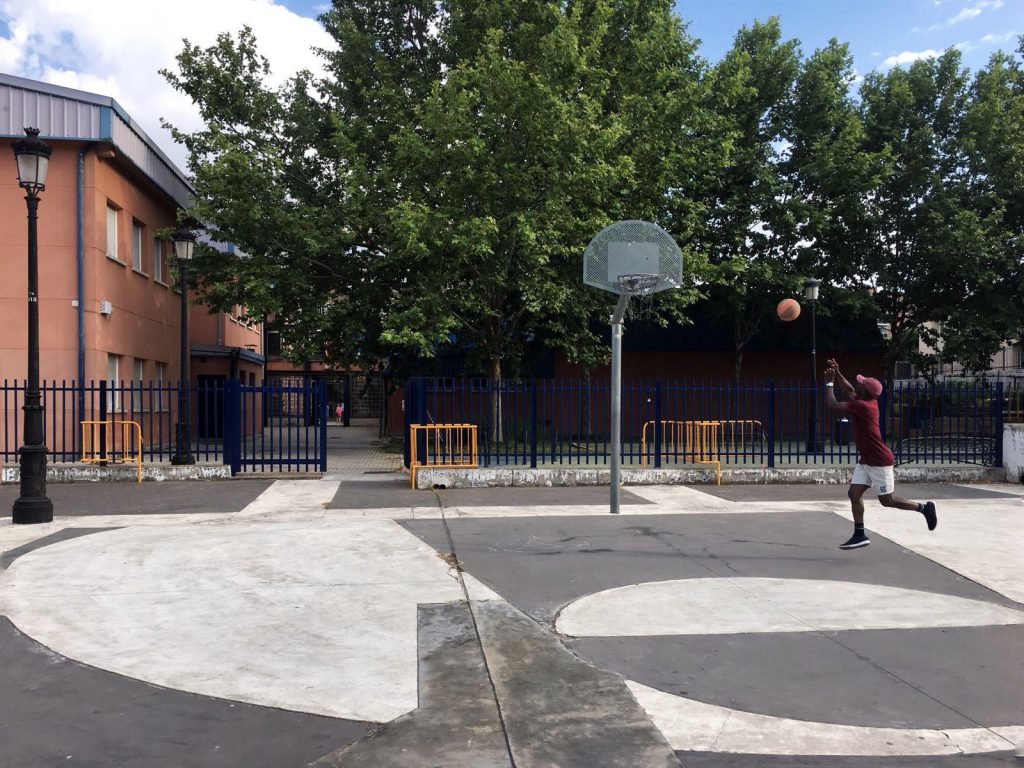 From an urban point of view, due to its new function, this building should be more open, encouraging all kind of people to go through, removing any sort of obstacle that interfere flows of people; but my capabilities didn’t include breaking walls so I decided to fight fences with fences. Following a mathematic rule which says – and – is + I intertwine mobile fences with fixed fences. Now there is a reason for those fences, holding the others, minus times minus is a plus.

Ampparito is a young Spanish artist who works subverting objects, meanings and realities to generate new experiences or situations. These may arise a wide range of results from the most absolute indifference to the deepest reflection, through disorientation or contemplation.

He has taken part in festivals and public art projects in different countries, such as New Zealand, Italy, France or India, and has also carried out more independent interventions in both urban and rural contexts. 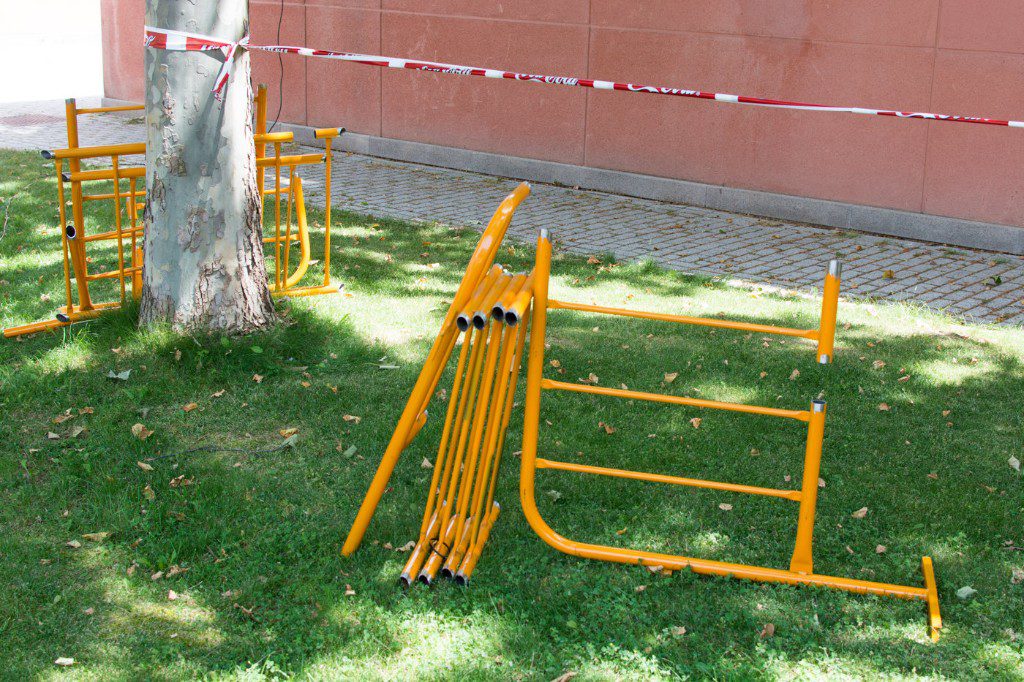 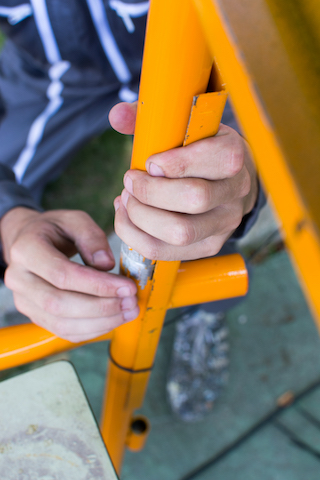 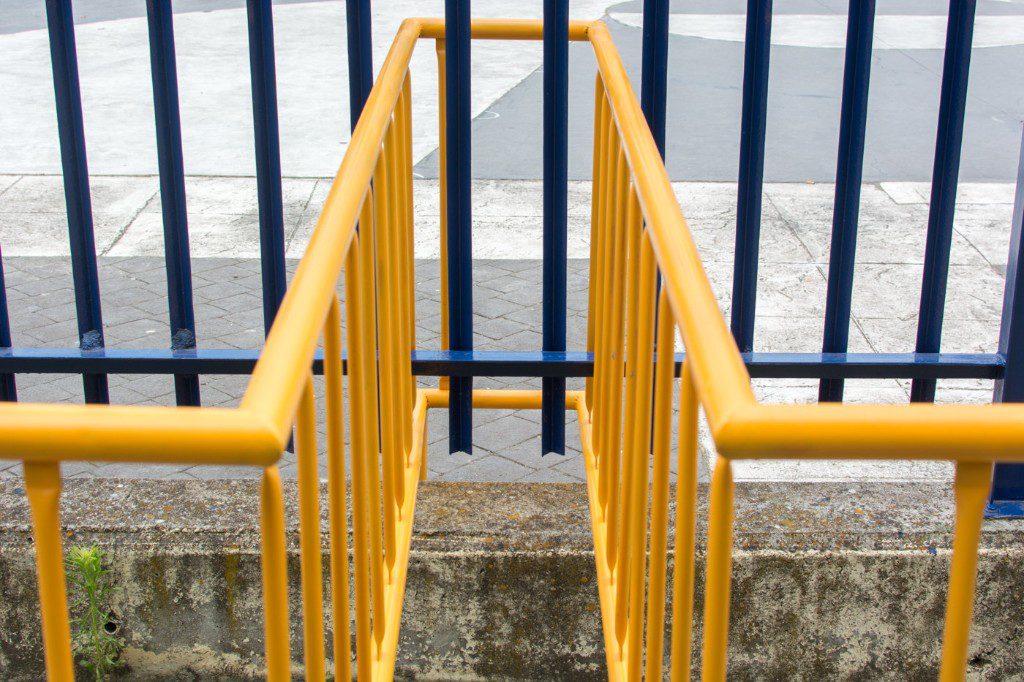 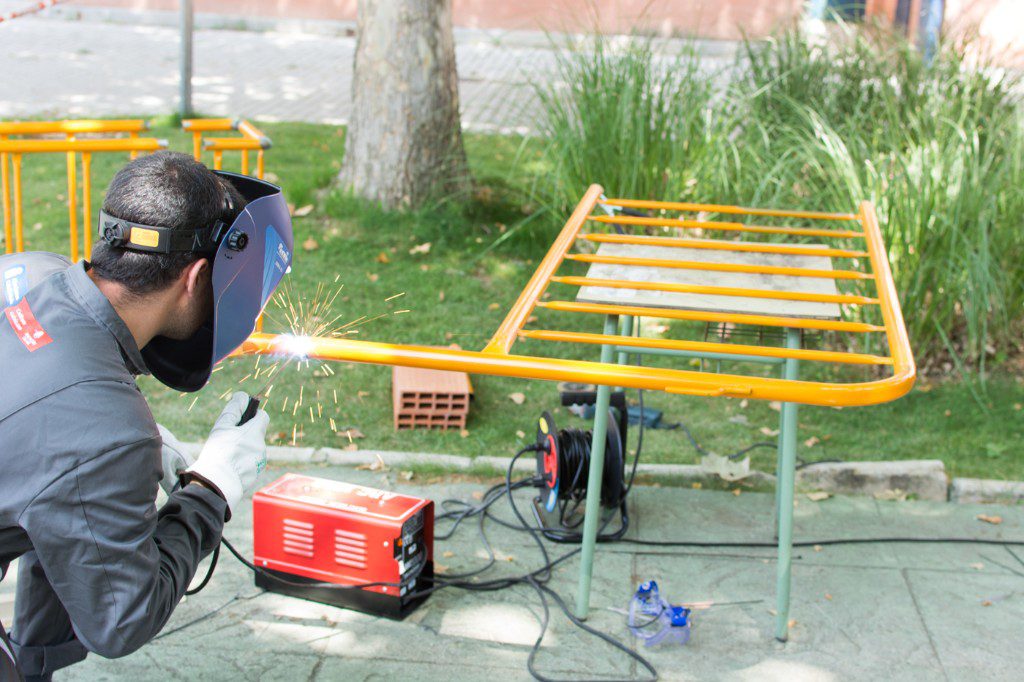 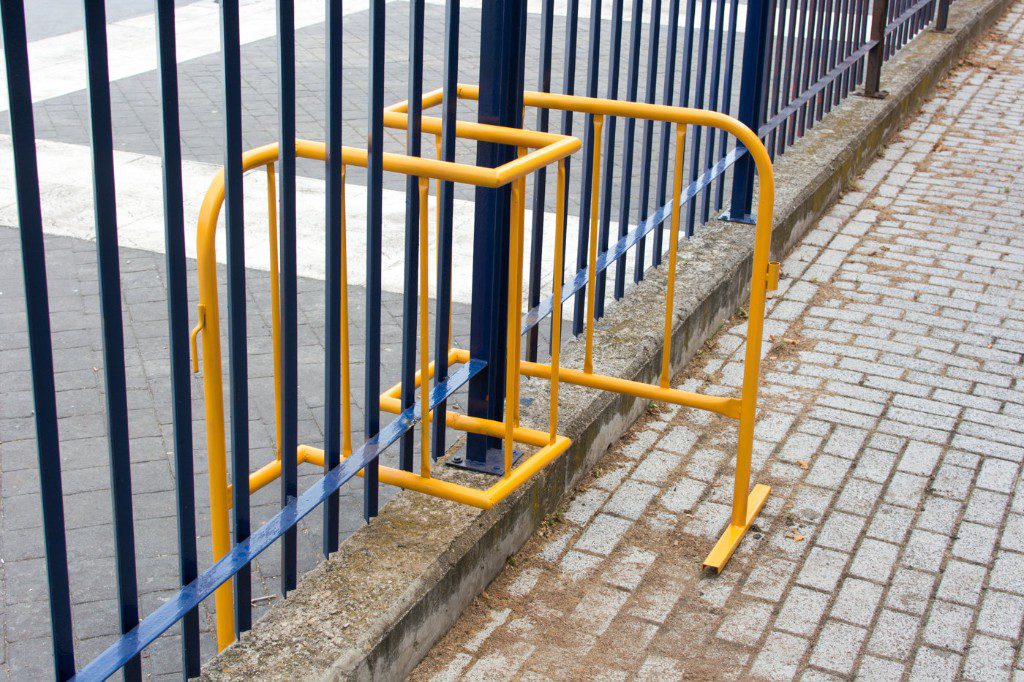 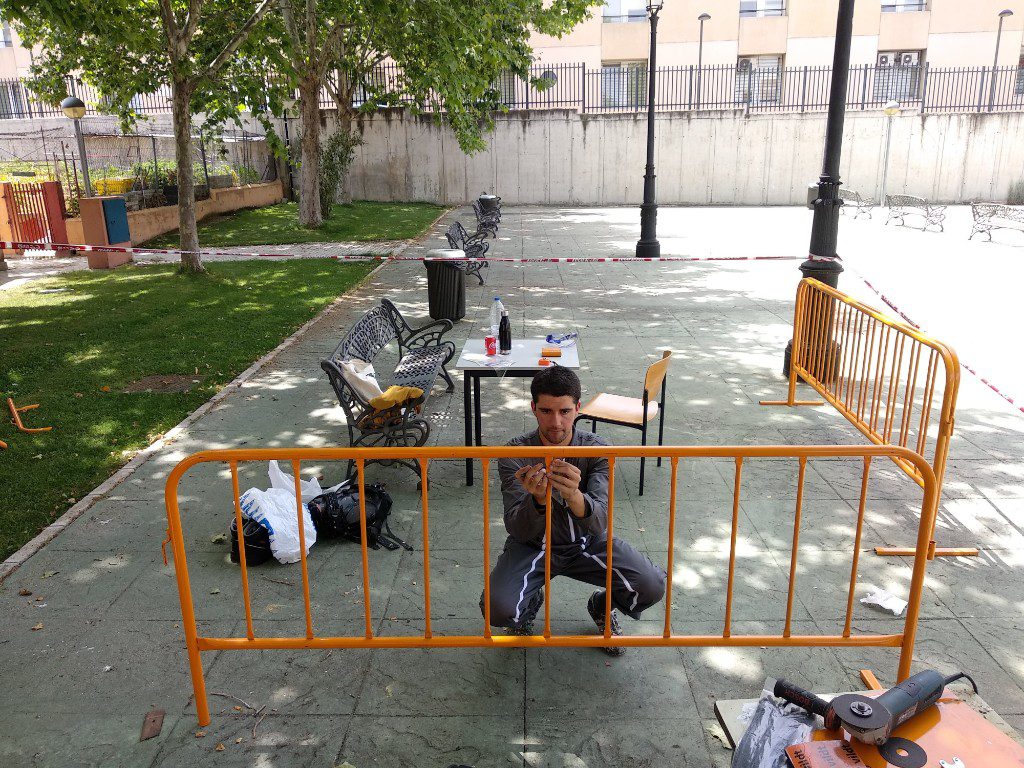