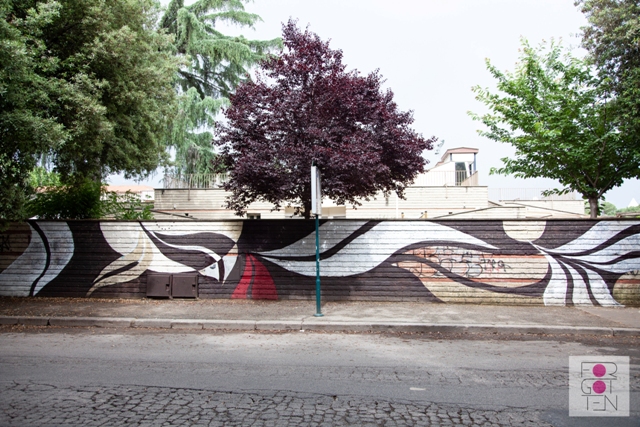 Campo Testaccio is the location of the second composition of the urban art project aiming to reclaim the value of urban heritage. The second Forgotten 2 street art intervention is dedicated to the theme of the interrupted sports facilities.The artwork was created in the iconic district of Testaccio, in via Zabaglia, in Campo Testaccio, the legendary stadium of A.S. Rome football team. 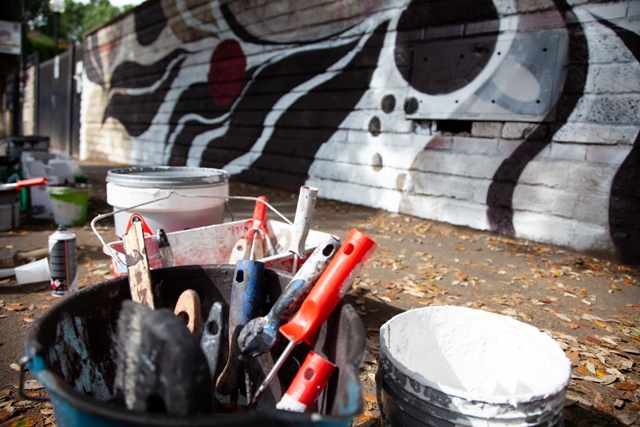 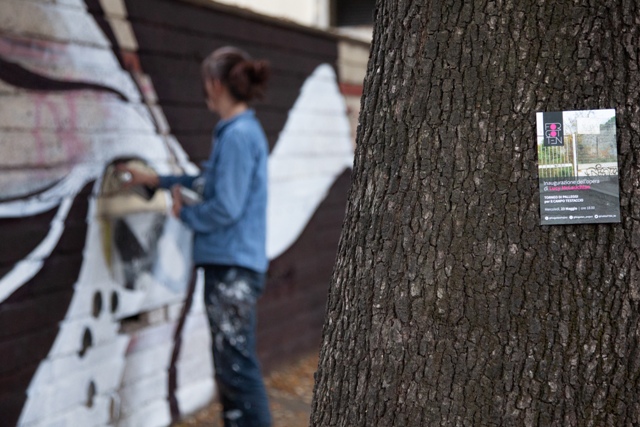 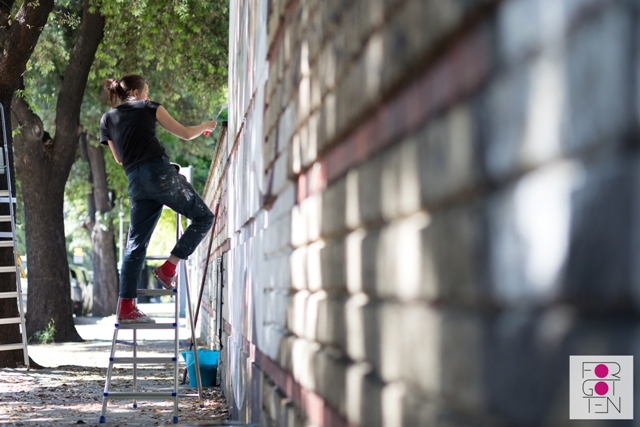 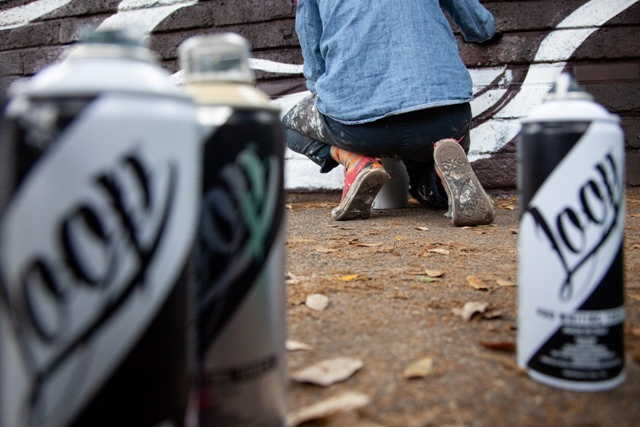 In recent months, the spotlight has been focused on the development of the new A.S. Roma stadium, but now we will remember where it all began!

There are many striking cases of forgotten sports facilities: the “Shark’s Fin” by the Archistar Santiago Calatrava and his unfinished Olympic complex in Tor Vergata, the Flaminio Stadium and the former Velodrome are just a few examples. As well as these, some small neighbourhood structures share the same destiny.

As always, Forgotten chooses to intervene on an emblematic building, deepening the architectural, anthropological and social aspects surrounding it. This time the location is the former Campo Testaccio, a symbol of the city, and we will use the elegance of an artist like Lucy McLauchlan to talk about the future of an area that was destined to be used for the most popular sport in the nation.

On 23rd of May from 6.00 p.m. was the OFFICIAL UNVEILING OF THE ARTWORK with the artist Lucy McLauchlan.

Lucy McLauchlan’s artwork has been brought on paper too, with the realization of a limited edition of silk prints that will be presented during the event.
On this occasion guests will be welcomed with a cocktail, since Absolut Vodka is supporting Forgotten and promoting the artwork. The Swedish vodka brand has always been close to the art world as a creative tool for a better tomorrow.

The preparation for the artist’s intervention started on the 12th of May with a BIKE TOUR through the urban street art carried out so far by Forgotten. The event is part of the Open House Rome 2018 programme. After a ride between Flaminio and Testaccio, the cyclists of the day left messages for Lucy McLauchlan. 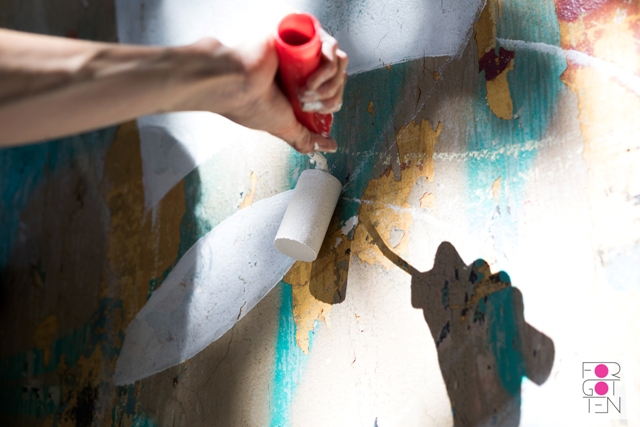 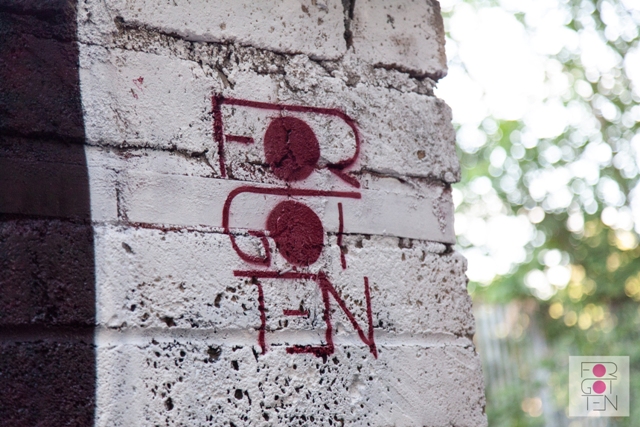 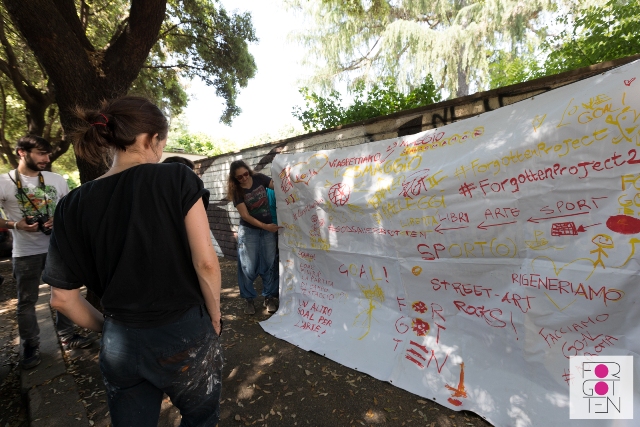 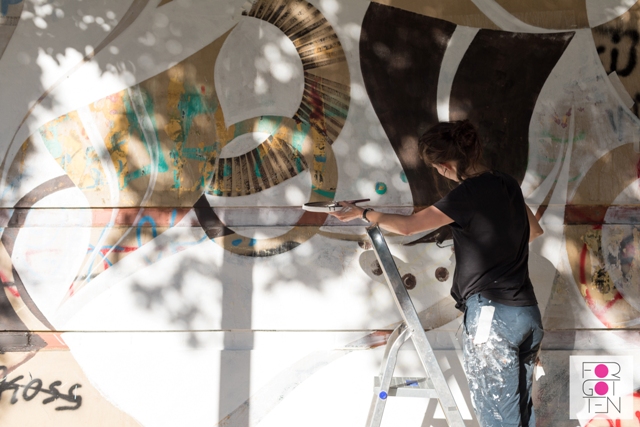 Short Biography Lucy McLauchlan
Working mainly in duotone, Lucy McLauchlan creates a world full of stories, governed by a passionate instinct that translates into an almost gestural painting and performative act. Lucy’s art combines ancient, almost prehistoric influences with a modern graphic sensibility. The creative impulse that binds these two different influences together constitutes its clear stylistic code, which gives its work an immediately recognisable style. A diaspora of other influences including art deco, psychedelia, naturalism and contemporary figurativism consolidate the elegant charm of her artworks distributed between Lisbon, Marrakech, Stavanger and of course her hometown Birmingham. Four of her art works are part of the permanent collection of the Victoria and Albert Museum in London.

About Forgotten
Forgotten Project was created in 2015 and after the first edition which focused on Portugal, this year’s artists have been chosen from the United Kingdom. From the role of London as the European birthplace of street art, to the Banksy phenomenon and the many festivals in different areas of the country, there are many different aspects of British street art to be explored.
The walls of the second edition will be signed by English artists who will make their first street artwork in Rome.
Forgotten Project was created to enhance Rome’s contemporary architecture through urban art.

The first edition focused on old factories, closed down cinemas, small stations and abandoned local markets. The ex fabbrica Mira-Lanza, Sala Troisi, San Pietro Station and ex-SIAR area were the exceptional locations for the artworks of the 5 portuguese artists Add Fuel, Frederico Draw, Miguel Januário (±MaisMenos±), Bordalo II and Daniel Eime.
The creations of the first edition where shown in the exhibition “Forgotten … (THE EXHIBITION)” at the MACRO Testaccio and in the Forgotten Catalogue 2015/16.

Forgotten Project is part of the Technical Table on Urban Creativity promoted by Inward.
The project has participated in several conferences including Urban Talks and the 2017 Public Space Biennal.
Recently received a special mention during the Institutional Art Awards 2017 and Art Doc Fest 2017.