“Life in shadows” – This nostalgic family portrait, based on an old picture, pretends to be an open window to this “typical family” intimacy. Despite a scene that seems relaxed, we can feel the defiant gaze of the masculine character. It’s a direct and piercing gaze that creates tension and begins a dialogue between the pedestrian and the mural.
The name of the mural comes from a classic and forgotten Spanish drama film, and it’s also a reminder of the shadows described by Russian writer Maksim Gorki in 1896, when he had his first cinematographic experience. “Last night I was in the Kingdom of the Shadows” 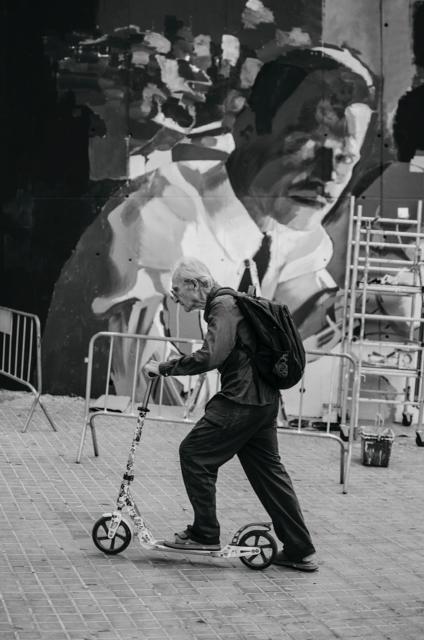 Miquel Wert Jirheden, (Barcelona, Spain, 1982) is a Spanish-Swedish painter who’s living and working in Barcelona. He cursed Fine Arts in Barcelona University and since 2000 his work has been shown internationally in solo and collective shows.
The artist is represented in various national and international art galleries. Hereceived various prizes, participated in numerous exhibitions and art fairs, and his work is part of public and private collections. He defines his work as “a research about quotidian life’s theatricality, questioning how we represent the collective subconscious, trying to avoid a purely nostalgic aspect (…) The mark is treated as a scenography, full of anonymous actors who are acting in front of the curtains of an imaginary theatre. Often, these actors are coming from some documents I inherited, or are the result of a difficult selection in several files.
This month’s intervention in the “12+1” complete a season with 2 solo shows in Green Flowers Art Gallery (Francia), and Galeria Anquins (Reus, Cataluña, España).

Project 12+1:
12+1 is a proposal put forward by Contorno Urbano:
12 artists, 12 months, one 50 square metre wall, one artistic intervention per month and one final exhibition, presenting each of the artists’ unique work. 12+1 is an open-air art gallery, one which changes each month.
A unique vision which problematizes the way we exhibit urban art, and the place of these artworks in the city.
The project aims to create a space for open dialogue in the city with the highest population density in Europe, in an area which sees over 7000 passers-by each day. You can find the wall at Calle Rosalía de Castro, just opposite the L1 metro exit for Torrassa, in L’Hospitalet de Llobregat, Barcelona.
Artists winners for 12+1 2017:
Roc Blackblock, Murone, Hosh, Miedo 12, BYG, Irene López León, Pati Baztan, Laura Llaneli, Elbi Elem, Fernando León, Edjinn, Miquel Wert.