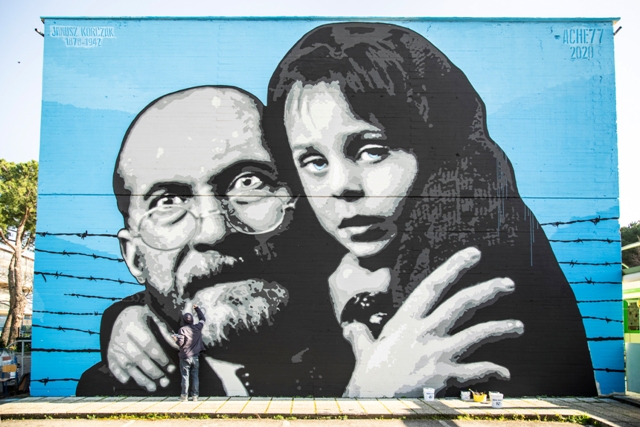 The mural created by Ache77 depicts the memory of Janusz Korczak (Henryk Goldszmit), a Polish free thinker, doctor, pedagogue, poet, educator and a pioneer in the battle for the rights of the children, as well as one of the countless victims of the Shoah. He affirmed that the fundamental rights of each child were three: the right to die, the right to live the present life, and the right to be exactly who he is. 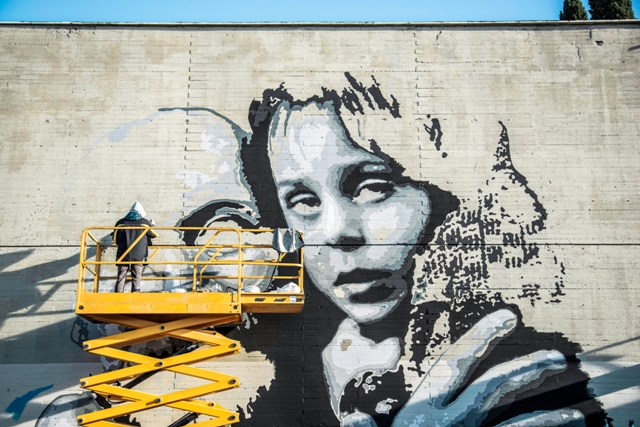 The works of Korczak are the basis of the International Charter of Fundamental Rights of the Child. ACHE77 encloses the messages of his works through the eyes he depicts. Here, has portrayed the fearful eyes of two people: his fear conscious, her fear isn’t. He has already found out all the cruelty that humanity is capable of inflicting, but he is not capable of revealing it to her. Two bodies, gray as fear, two eyes, blue as the clearest sky. We must return to believe that the sky could only be blue. 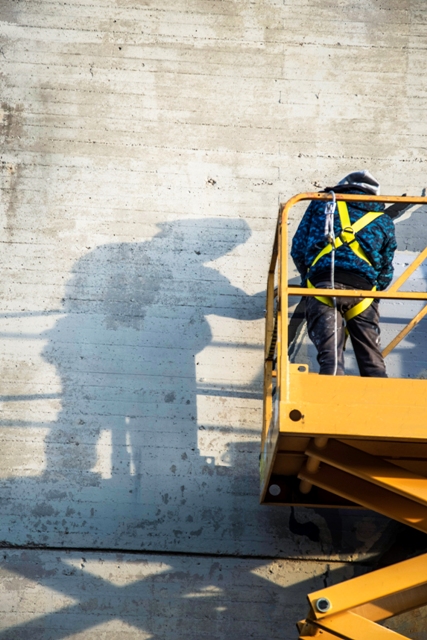 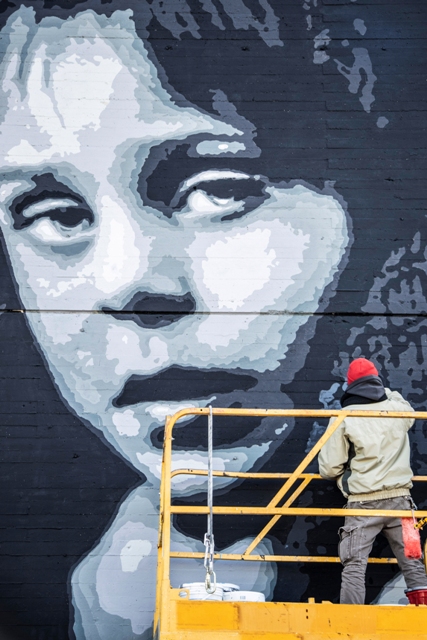 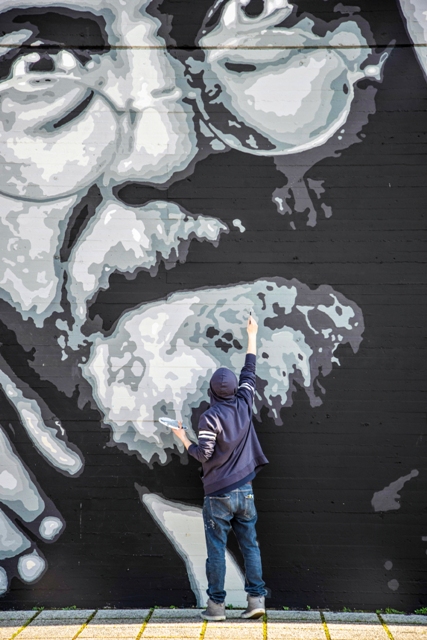 ARTIST //ACHE77 is a stencil artist, as well as a urban artist and a visual artist. Born in 1991 in Romania he has made stencil art his main weapon, since 2007. Graduated in sculpture with a thesis on guerrilla sculpture, therefore non-commissioned public installations, ACHE77 creates portraits that have the ability, through the intensity of their gazes or poses, to entangle with the people who absently encounter them. The figures that the artist creates play a non-verbal language combined with a great attention to details. His works can be casually found on the streets, in art galleries or in contemporary art museums. Thanks to two scholarships and the support of his artistic production, since 2015 ACHE77 has been living and producing in Florence. In 2016, together with four artists and two cultural promoters, he founded Street Levels Gallery, the first Street Art gallery in Tuscany which, in addition to being a meeting point for creatives, set itself the goal of providing information and education over the street art movement. His artistic career has contributed, over the years, to the re-appropriation of many public spaces giving birth, in the long run, to a process of revivification of the city communities involved.

CURATED BY //Street Levels Gallery is an international urban art gallery, the first in the Tuscany region and in the city of Florence. The A Testa Alta Association, which belongs to the gallery, is constantly and pervasively committed to the organization and promotion of artistic and cultural events and activities related to urban art, using it as a tool for a collective re-appropriation of the public space, as a new way of communication between those who live the urban structures, as a stimulus to creativity, as well as a way to allow the individuals to acquire a deeper, direct and incisive contact with the reality that surrounds them. The aim of the association is to create an articulated space that’s capable of investigating and providing information on the various levels of interaction between art and the streets, the public and the exhibition space, with a clear intention of bringing the city back to being that immersion space of growth in which to search our own individual and collective identity, as well as to provide more immediate keys to interpret the present and build the future.

“The legacy” – Mural intervention by ACHE77
Curated by Street Levels Gallery, via Palazzuolo 74r, Florence
at Fanciulli Primary School, via Policarpo Petrocchi 32, Florence
“If we asked a child to draw us a sky, he would color it blue. For children, there’s no chance that the sky would not be that color, unless it is a night sky, but they fear night. Darkness looks black and scary, but the brightest day is still kept in their eyes. “