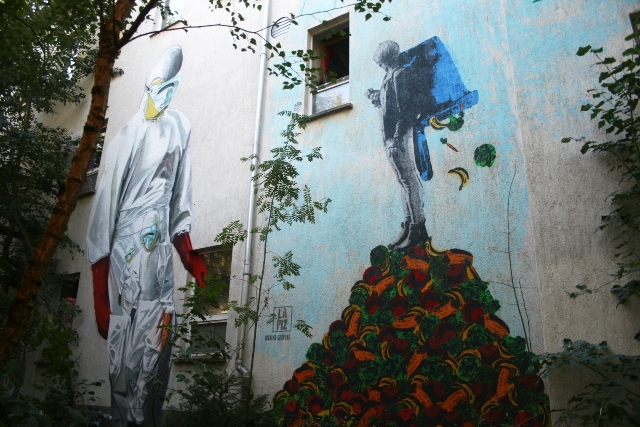 ‘Another Day in Paradise’ – Lapiz:  This mural was painted outside an old factory building in Limbach-Oberfrohna, Saxony, Germany and is about 10 m high. The eye follows up a massive hill of fruit and vegetables. There stands a woman holding a cell phone and looking into the distance, ignorant of food falling out of a trash can strapped to her back. In the sky above some ‘trash fliers’ are flying above her head, each with a trash can strapped on and loosing more food. One can also read what seems to be a ‘whatsapp’ message: “Another day in Paradise”. 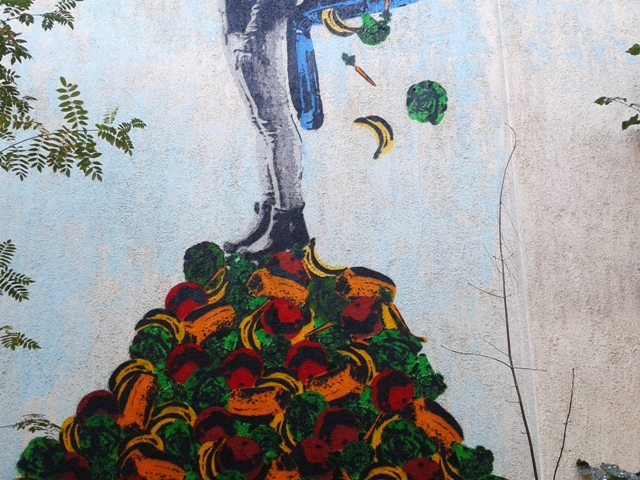 The motive addresses the ignorance of people living in the industrialised world or so called “first” world. Observing from the outside it seems like paradise. People are well fed, there is education for everyone, good health systems, social nets, absence of wars, beautiful landscapes… 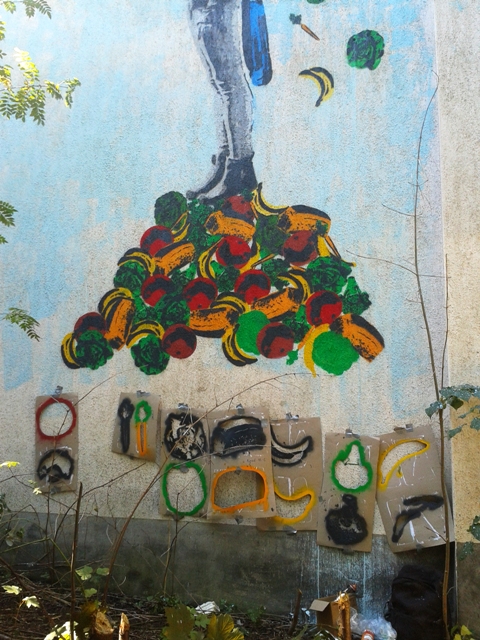 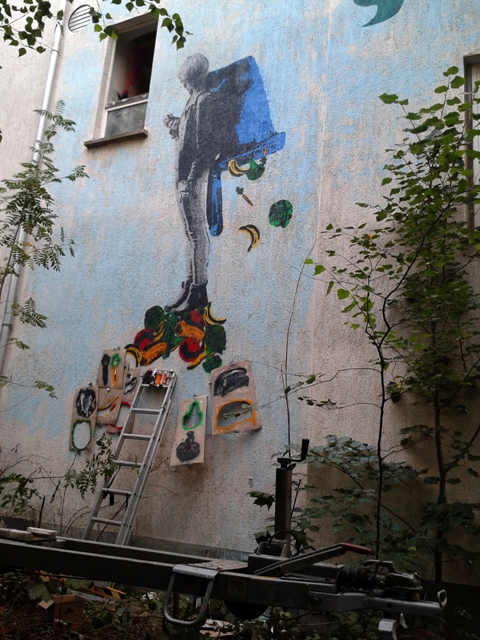 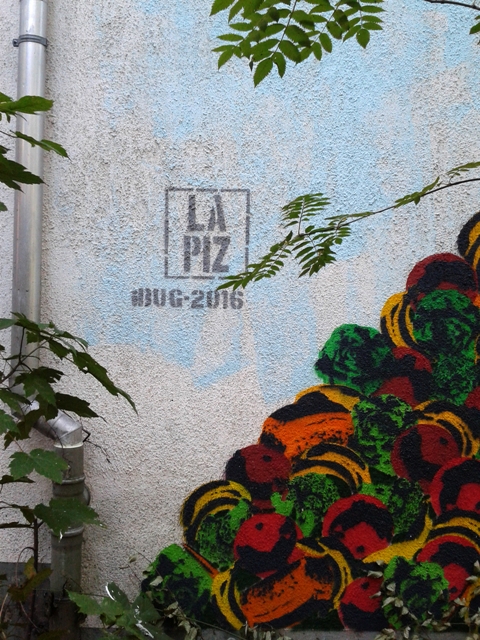 Even though we produce enough food to feed the entire world, there are still close to 1 billion people starving worldwide. Huge quantities of edible food are thrown away. The reasons might be diverse, ranging from the odd fruit that does not look that nice anymore to farmers tossing tons of overproduced vegetables on the streets to protest against foreign imports. In Germany, for example, which is often regarded as the forerunner of recycling and waste handling, 82 kg of edible food are disposed per person per year. Globally, it is estimated that 1.3 billion tons of food get wasted each year. Overproduction and food waste is not only a problem because of filling up landfills but the energy wasted to produce, transport and finally dispose of these foods.
Link to screen print: http://lapiz.ca/product/another-day-in-paradise/

‘(7 Daughters of) EVE’ – Lapiz
This (halftone) stencil is a combination of 7 different woman’s faces. The women origin from all parts of the world: Polynesia, Asia, Africa, East Europe, Latin America, Middle East. 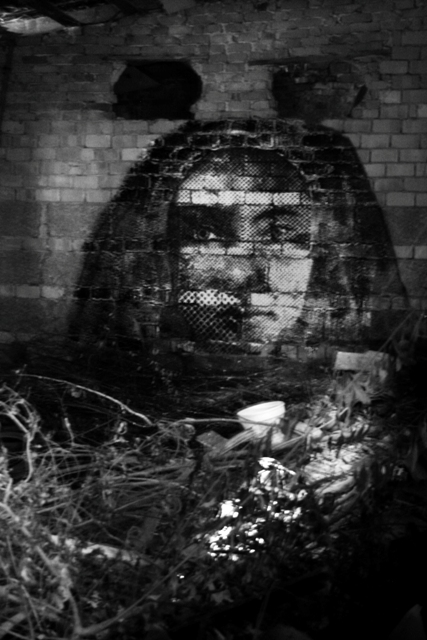 Two interesting scientific facts where the inspiration for this motive. On the one hand, a book by Brian Sykes called “The 7 daughters of Eve” in which he describes that all people currently living in Europe can map to only 7 common female ancestors. That means that instead of looking at the different countries and borders in Europe one can put these people together into only a handful of different families. Instead of dividing each other into “us” and “them”, we all merge into a big group of distantly related cousins. Furthermore, Sykes explained that these 7 daughters have also one common ancestor which he calls the mitochondrial Eve (as mitochondrial DNA mapping was used to investigate relationships). The more distant we look, it becomes obvious that every single living person today has one common ancestor shared with the people of all different parts of the world. 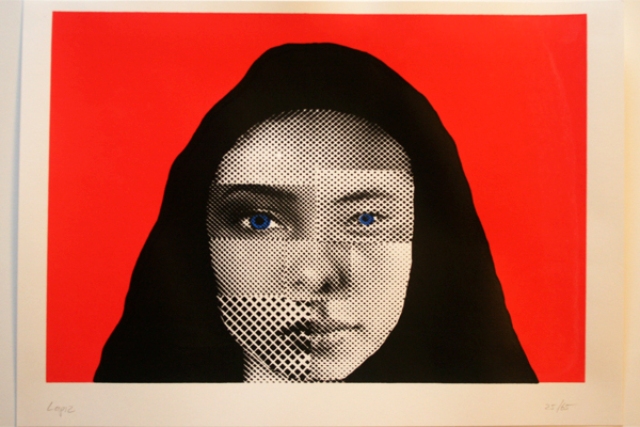 Another interesting study was conducted by the University of Copenhagen which revealed that all people who have blue eyes share a common ancestor which lived some 6.000-10.000 years ago. They figured this out by looking at the genetic mutation causing blue eyes and discovered that it was identical in all of their investigated subjects. This means that blue-eyed people from Northern Europe are related to blue-eyed people in China, Africa, and the Americas etc.

The idea of the painting therefore is to show that we are all related, even if we look different because of the colour of our skin, the shape of our eyes or the language that we speak, we are closer to each other than we think making a self-identification based on borders and countries obsolete.
Link to screen print: http://lapiz.ca/product/eve/ 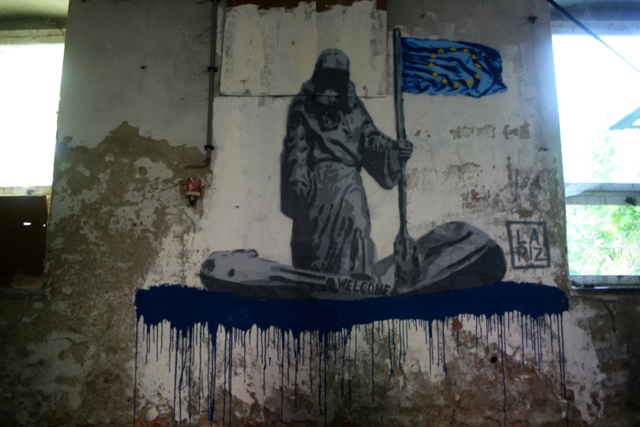 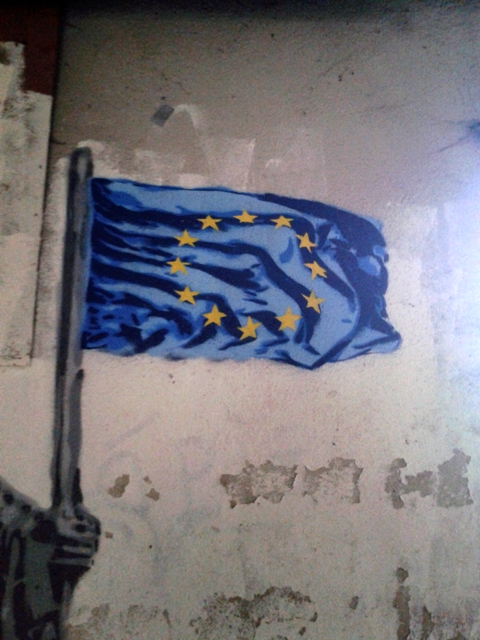 This work shows the Ferryman that carries the souls across the river Styx. Currently, he has been employed by the EU to receive the many refugees still dying in the Mediterranean trying to reach paradise.
Link to screen print: http://lapiz.ca/product/styx-the-ferryman/ 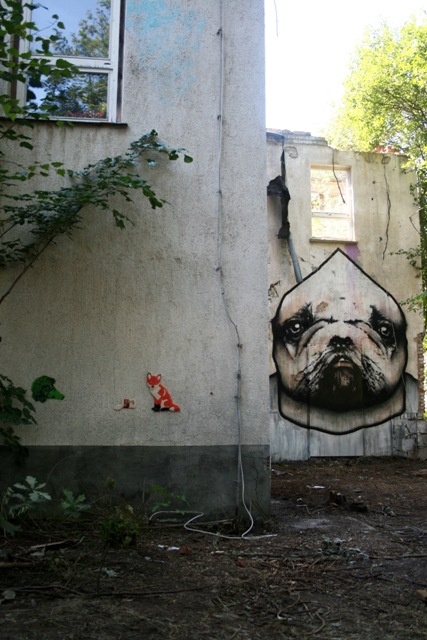