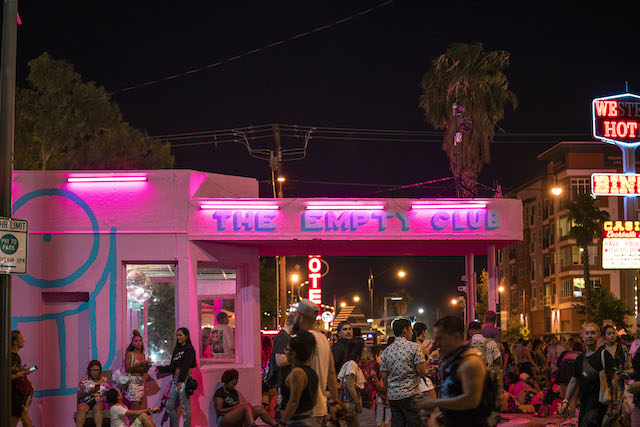 Justkids Wraps up Life is Beautiful Festival 2018 art in downtown Las Vegas. The the sixth edition included brand new multi-media art pieces from some of the most notable artists & installation makers around the globe. Blurring the lines between visual and experiential art, festival-goers enjoyed an immersive visual experience within 18 city blocks, far-beyond the traditional festival art programming. Unruffled by the intense heat of Las Vegas summer, the JUSTKIDS 100% female team worked nights and days during 4 weeks to produce larger-than-life wall installations and murals from diverse artists, including:
● Marquis Lewis, known by his internationally-recognized tag Retna (USA), added to the downtown footprint with a metallic mural piece between Ogden & 7th. The mural features his cryptically enchanting and iconic visual language with a special message dedication from the artist to the Las Vegas community. Justkids Curator, Charlotte Dutoit, expanded on this message: “RETNA’s mural for Life is Beautiful aspires for a future, rooted in the myth of the past, featuring a quote of Crazy Horse, Chief of The Oglala Lakota: “I see a time of Seven Generations when all the colors of mankind will gather under the Sacred Tree of Life and the whole Earth will become one circle again”. 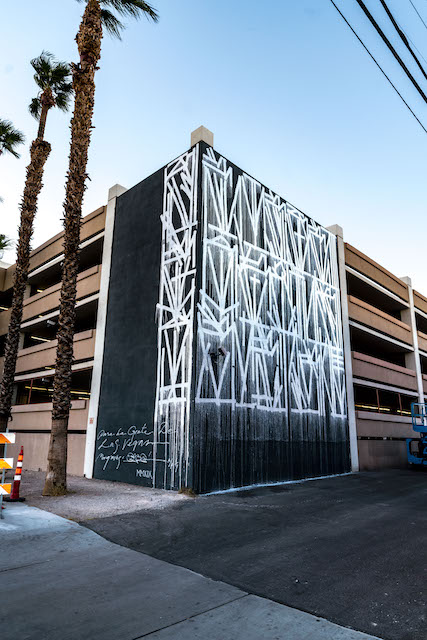 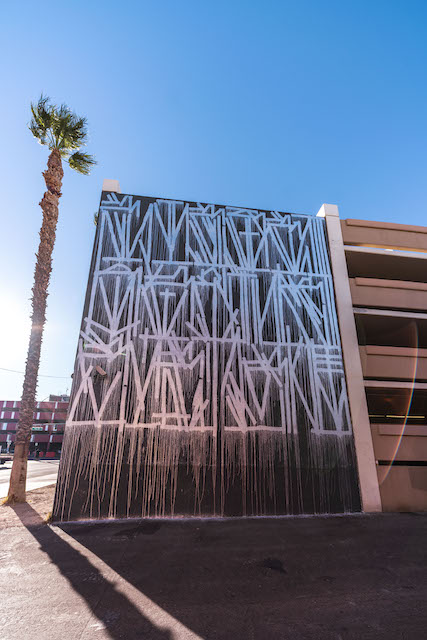 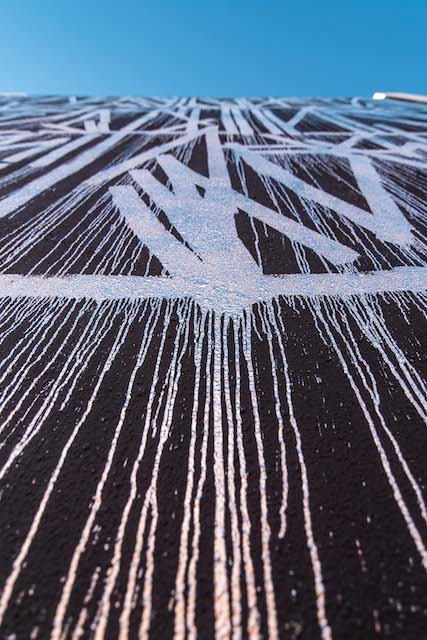 ● Paris-bred graffiti artist André Saraiva’s iconic alter-ego, known as Mr.A, has popped up in alleys and corners all over Downtown Las Vegas, with his cartoonish winking smiley face gracing the most unassuming yet intimate spaces of the town, along with Mr.A pop-up pink pianos, inviting all passerby’s to create a tune. In addition to his signature street art pieces, Andre opened up an unexpected addition to Las Vegas nightlife:
The Empty Club; a lonely rotating disco ball floating in the middle of the empty mirrored room of a former gas station that
now illuminates the busy intersection of Fremont and 8th Street. 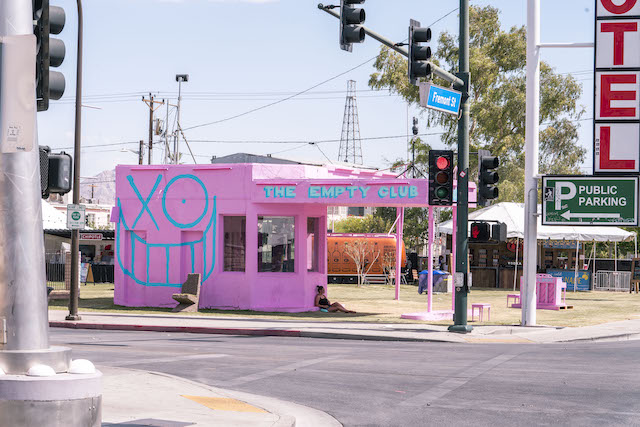 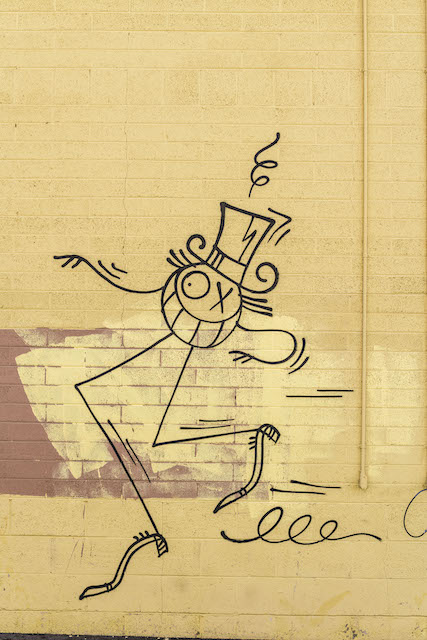 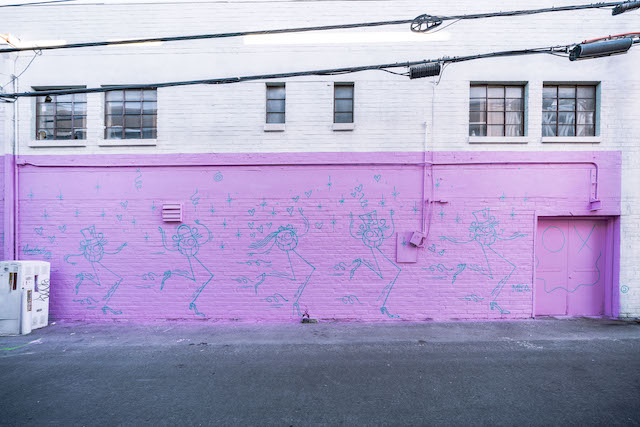 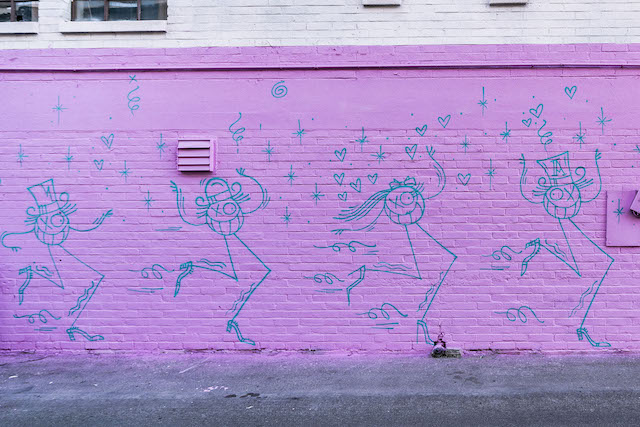 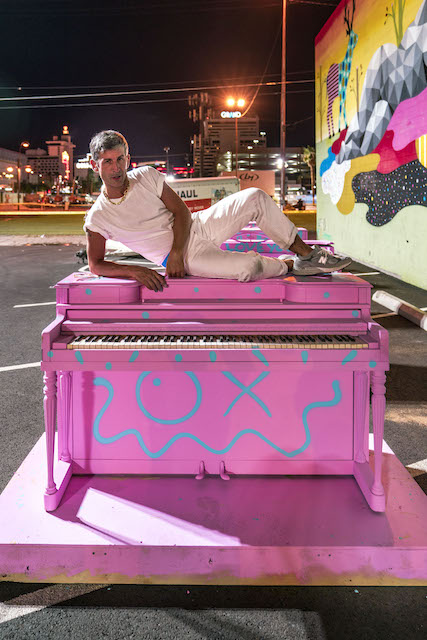 ● Lakwena (London) brought her iconic kaleidoscope uplifting color block work to the max, creating her biggest mural project yet with a 120 feet long wall, towering over the festival grounds. She also integrated her art as artist  ambassador & designer of the Life is Beautiful eclectic visual identity for this year’s music lineup poster, signage and visual ID. 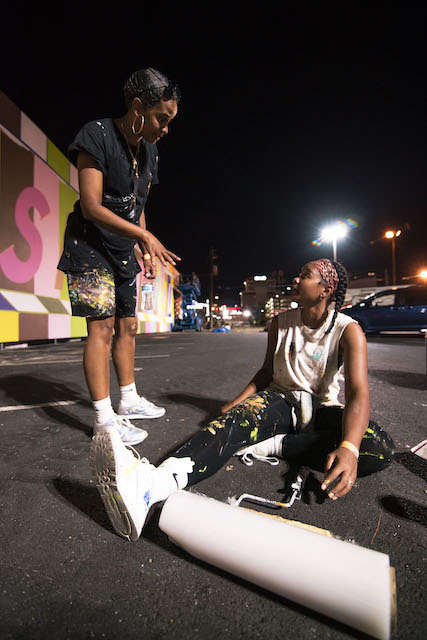 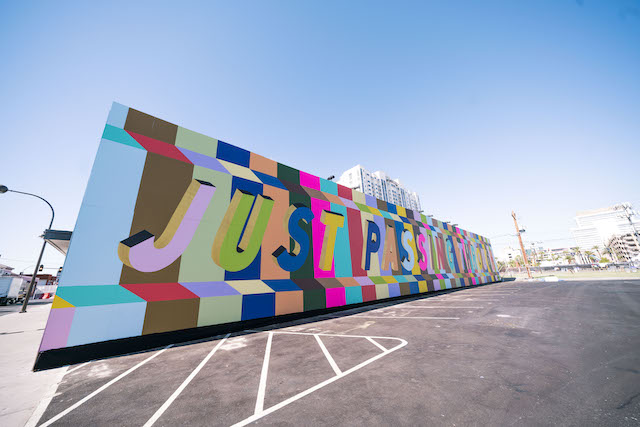 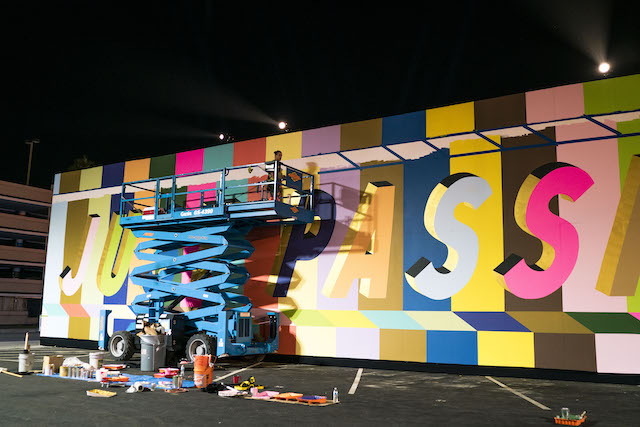 ● Portuguese activist and ecologic artist Artur Bordalo, known around the world as Bordalo II, has delivered his most ambitious trash animal installation to date entitled Wild Wild Waste, powered by Zappos.com, debuting a 10,000 square feet world of trash on display in a former 50’s Motel. The eyepopping zoo parody aims to draw attention to a current global problem, human waste production and the commodification of animal habitats, all the while offering viewers the ultimate destination for a creative funhouse. 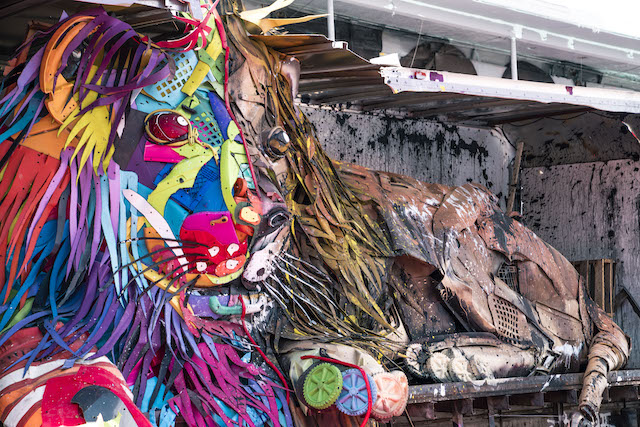 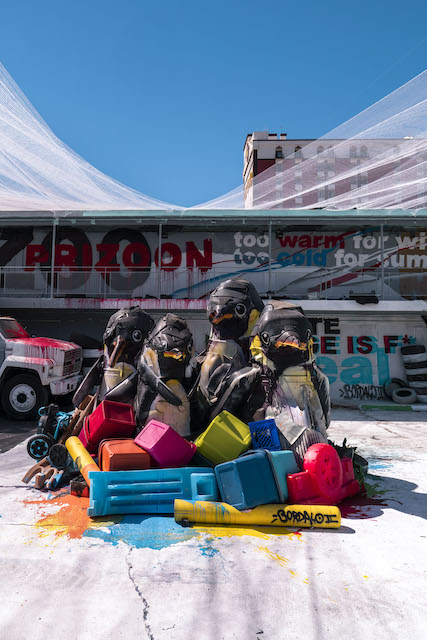 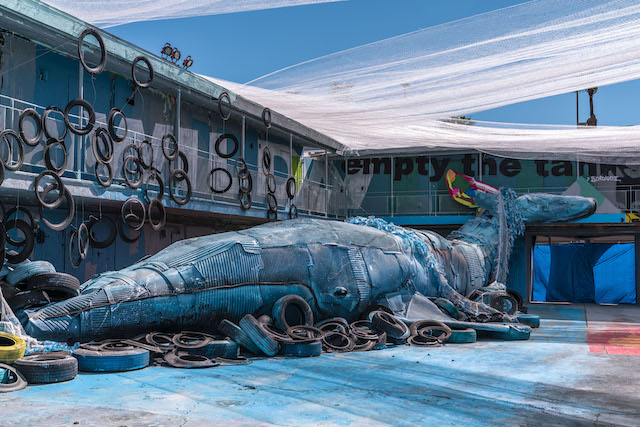 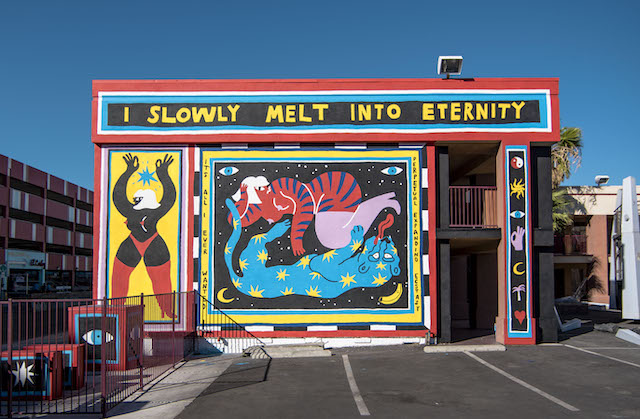 ● Sebastián Velasco (Spain) also took over the downtown festival footprint, with his first piece in the USA, a striking ninety degree diptych presenting his honest and eloquent interpretation of Las Vegas nightlife mythology, unique architecture and street culture, capturing the city of lights and its souls with beautiful contrast. 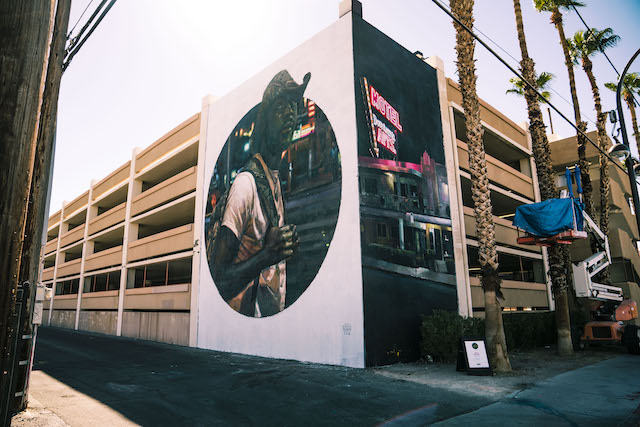 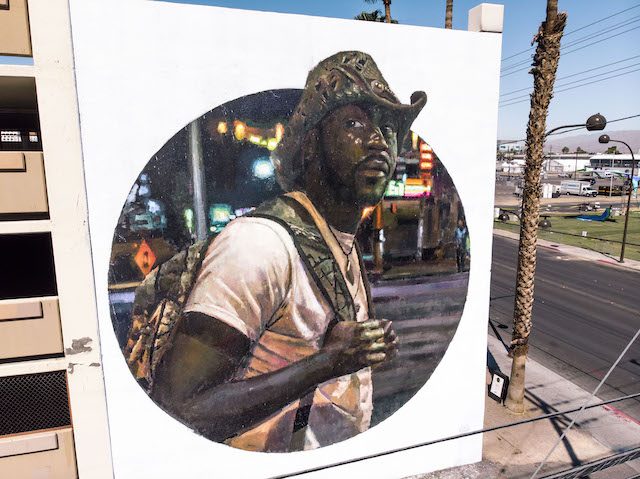 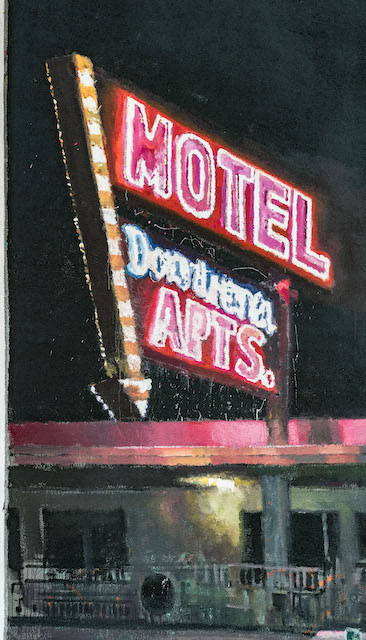 ● Recapturing the multiple dimensions of the America essence, United States street artist Aware from the Indecline activist crew, gave color, depth and visibility to the original red white and blue with his brand new mural contribution to his hometown. 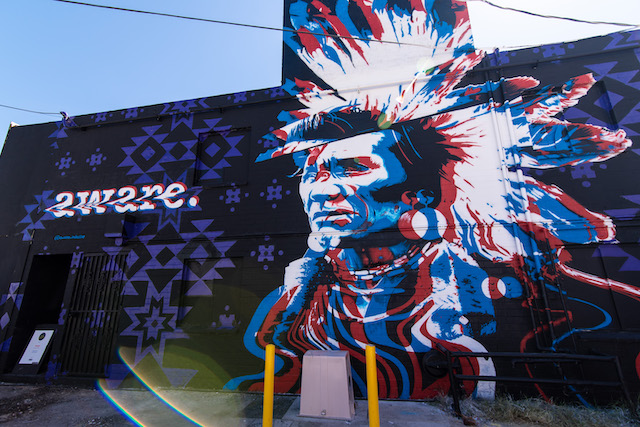 ● The design and architectural technology company Stereobot’s lit up the festival grounds, enhancing the visual experience design of Downtown Las Vegas, with a compelling structural installation made of 100% sustainable elements. The organic form came to life during the festival weekend, providing shelter and wonder to many. 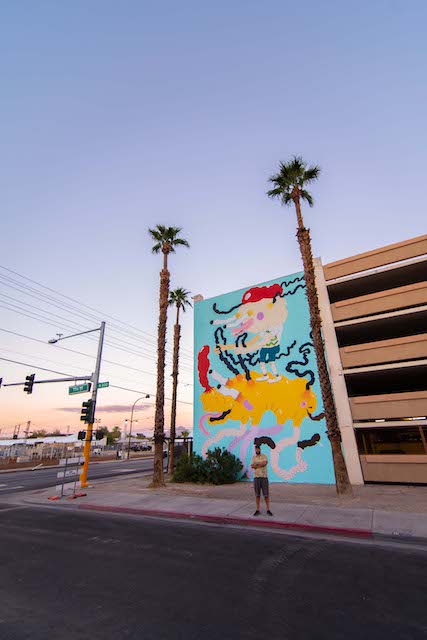 Justkids and Life is Beautiful continue to elevate the festival art program every year, setting the bar high by providing unparalleled access and experiences from some of the world’s most sought-after visual artists and offering a new perspective to enjoy the city and its people. Life is Beautiful’s open-air gallery is a scene to be seen, event when all the music, comedy and culinary happenings are packed up & gone. When visiting Las Vegas, make sure to visit the downtown.

About JUSTKIDS
Justkids is a creative house that conceives and produces comprehensive art projects on an international scale with some of the world’s most engaging artists, curators and strategic consultants. Circled around an idea of expanding the city’s already rich street art portfolio; Justkids comes to Downtown Las Vegas each fall with its own star-studded art lineup of artists from all around the globe. In six years, the streets and energy of Downtown Las Vegas have been transformed to an open-air gallery featuring the best of contemporary visual culture and creativity.

About Life is Beautiful
Life is Beautiful is rooted in positivity, unity, inspiration and empowerment. Every September, thousands of inspired creators from all over the world come together for the three-day festival centered in music, art, taste and ideas. Eighteen blocks in Downtown Las Vegas are transformed into an open-air art gallery and a place of discovery, cementing imagination and initiative into our DNA. That gathering, by its very nature, becomes a platform in which positivity prevails, culture and creativity thrive and transformation occurs. Now in its sixth year, Life is Beautiful Music & Art Festival (September 21–23, 2018) features marquee musicians, chefs, artists and speakers. Named “Music Festival of the Year” by Pollstar in 2017, Life is Beautiful attracted more than  175,000 attendees at last year’s sold out event. Past performers include Kanye West, Muse, J. Cole, Stevie Wonder, Foo Fighters, Major Lazer, Lionel Richie, Chance the Rapper, Gorillaz, Lorde, Blink-182 and many more, along with inspiring talks from powerful
thought leaders such as Bill Nye, RuPaul and Pussy Riot.
Globally recognized artists including Shepard Fairey, Banksy, Fafi and D*Face, to name a few, have permanently revolutionized the streets of Downtown Las Vegas.
For the latest festival news, visit www.lifeisbeautiful.com, or connect with Life is Beautiful on Facebook, Twitter, Instagram, Snapchat (@LIBeautifulFest) and YouTube.