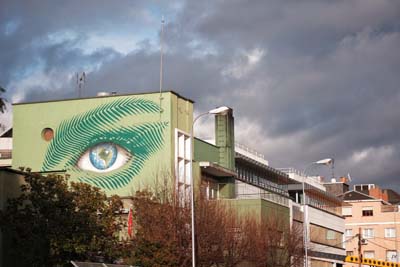 The 2 new murals focus on climate crisis and the fight of indigenous people to save their lands, have been curated by Stephen Donofrio for Greenpoint Innovations. Jorge Rodríguez-Gerada chose again to speak out for social issues and minorities. 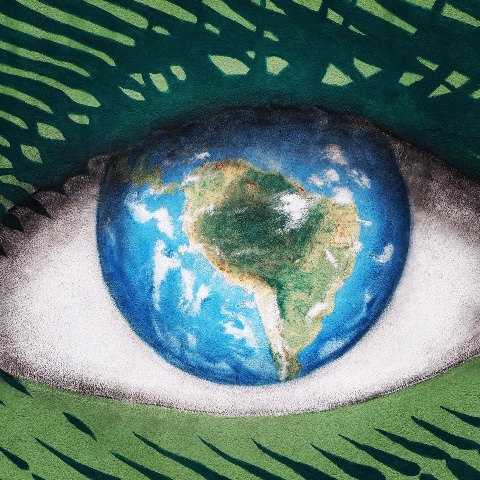 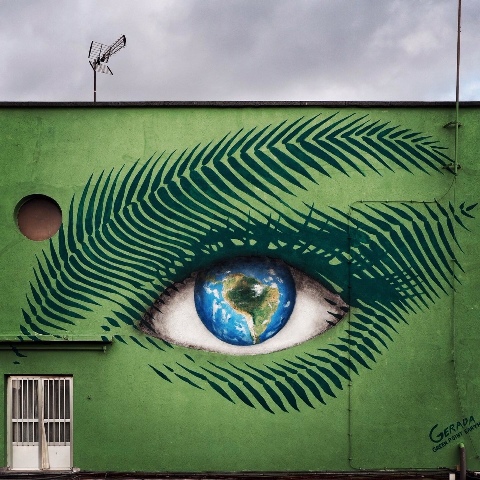 “FOREST FOCUS”
At the center of the eye is Planet Earth, with the Amazon as the pupil and Chile clearly visible as a homage to the official COP25 host country. “Forest Focus” alludes to the eye symbol of Goal 13 for Climate Action with the image of the world as the iris. This mural has an artistic focal point that symbolize the values set forth at the COP25 conference being held in Madrid.” 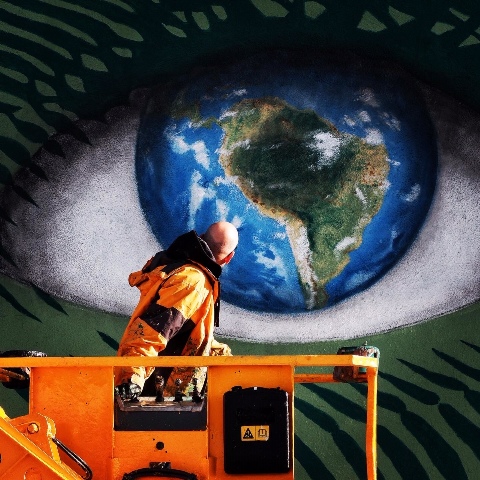 “PAST, PRESENT, FUTURE”
This mural is a portrait of Hilda Pérez, a leader of the Indigenous Ashaninka Community located in Peru. The team chose to feature indigenous people as they occupy 25-50 percent of the Earth’s land and the direct result of their stewardship keeps 51 GT of CO2 from being emitted into the atmosphere, a huge contribution to avoid and revert climate change. Notably, the colors of the feather headdress represent each of the 17 Sustainable Development Goals set forth by the United Nations. Hilda Pérez is also the Vice President of the National Organization of Andean and
Amazonian Indigenous Women of Peru ( ONAMIAP ). 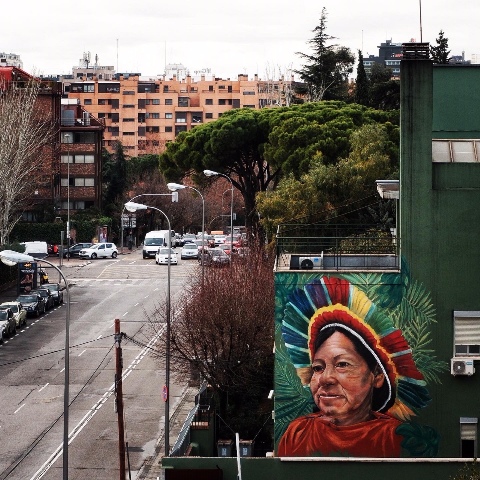 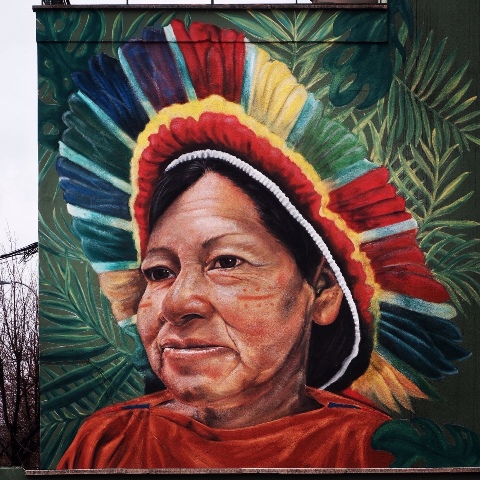 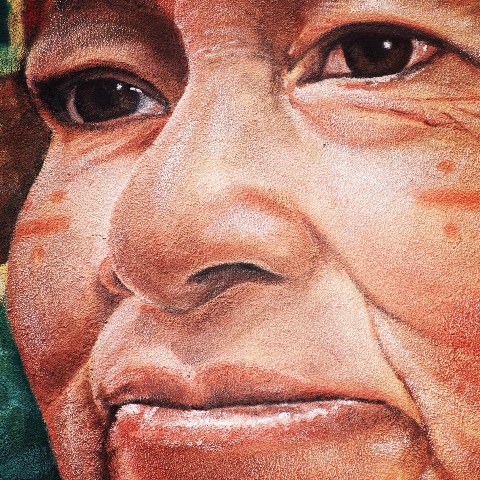 ONAMIAP was founded on November 25, 2009, the International Day Against Violence against Women, as a result of a long process of formation, debate and articulation between sisters from different regions.

THE ORGANIZATION
These 2 murals have been curated by Stephen Donofrio for GreepointEarth Madrid 2019, a project by Greenpoint Innovations .
The mission of GreenPoint EARTH is to leverage the incredible power of public art to inspire climate action with positive messages about the interconnected themes of nature, people, and climate. Curated by global climate sustainability expert and founder of GPI, Stephen Donofrio, artist Gerada was perfectly suited for this project. He has since the 1990’s in NYC been producing works with a social and ecological commentary, and is most well-known for his pioneering ‘Terrestrial Series.” Bios below.

“GreenPoint EARTH Madrid shines a light on the powerful leadership from indigenous people, women, and youth to save our planet from a climate crisis. Our world’s forests hold priceless value when you add up the people, biodiversity, and ecosystem services that that they contain. Teaming up with Jorge was an obvious decision. He has a clear vision and an incredible talent to turn these complicated concepts into artistic reality. We’re grateful to him and the many organizations that supported our full program of innovative engagement activities for COP 25.”

This project has been possible thanks to the support of the City and Community of Madrid, United Nations for Climate Change , National Wildlife Federation International , Arbor Day Foundation , and Forest Trends .

THE PLACE
These 2 murals were painted in the Occupational Center in Lineal City ( Centro Ocupacional Ciudad Lineal ), a center for people with intellectual divergences. Naturally aligned with the goals of GreenPoint EARTH, this freely offered facility is dedicated to helping people in the development of professional, personal and social skills.

THE FACTS
This display of the climate crisis through the beauty of nature and its people emerges after 14 days of the longest UN annual climate conference, during which the world’s highest level of world governments failed to make the political progress needed with even the UN Secretary-General António Guterres officially stating “I am disappointed with the results of COP25.” Symbolically, this project represents how the people of the world are no longer willing to wait for the top to take the decisive action required to set our economies on the sustainable pathway needed to ensure the
long-term health of Planet Earth. Fridays for Future has proven this, with millions of youth and adults rising up to take a stand against climate change.
– Greenpoint Innovations-

💥Meat and dairy consumption are the main factors for the destruction of the Amazon and the murdering of the indigeneous people fighting there. Almost all the fires that are destroying the Amazon are due to intentional fires in order to have space for more cattle industries, or plant soy to feed the animals. This same soy is the one that is used in almost all the world to feed local cattle. So, basically, we are all burning the Amazon.

Jorge Rodríguez-Gerada is a multidisciplinary contemporary artist born in Cuba in 1966, and
raised in the United States. His work is mainly created at large scale in urban spaces around the
world such as the United States, Morocco, Lebanon, the Netherlands, Argentina, France, the UK,
Spain, etc. He was a founding member of the Culture Jamming movement during the early 90s in
New York, with the groups ‘Artfux’ and ‘Cicada Corps of Artists,’ altering billboards and advertising
on the street. In 1997, he starts his solo career, moving to Barcelona in 2002, where he started his
‘Identity Series,’ a series of large scale, ephemeral pieces created using charcoal. From that point on,
he begins to develop his ‘Terrestrial Series’ (huge works, also of an ephemeral nature) created on the
ground, and of such a magnitude that they may be seen from space. Among his other projects are
the ‘Identity Composite Series,’ and smaller-format pieces for the gallery exhibitions such as the
‘Fragment Series’, ‘Urban Analogies Series,’ and the ‘Memorylythics series.’ Since 2009 he has also
been the curator of the urban art festival Avant Garde Tudela, in Navarra Spain. Gerada has also
collaborated in many cultural projects and exhibitions.
Jorge Rodríguez-Gerada is especially interested in social and ecological issues.
Web: https://gerada-art.com/
Facebook: https://www.facebook.com/JorgeRodriguezGerada/
Instagram: https://www.instagram.com/gerada_art/
Twitter: https://twitter.com/rodriguezgerada
Youtube: https://www.youtube.com/user/JorgeRodriguezGerada