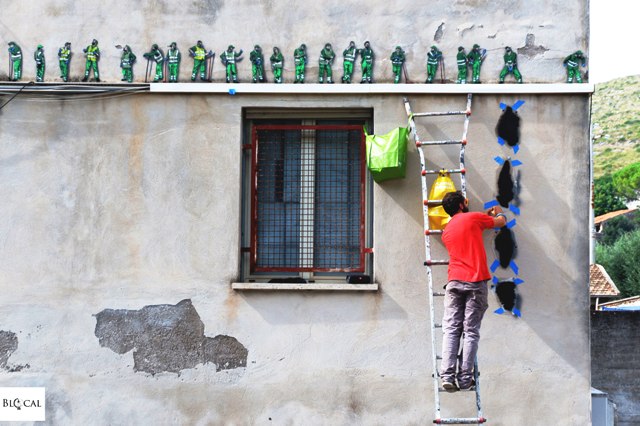 Belgian street artist Jaune gets site-specific by painting on Gaeta’s waste collection centre. Memorie Urbane 2018 is street artist’s Jaune first occasion to depict his iconic characters creating chaos at their home base!
“That one is you, always glued to your phone!”

“C’mon, I’m not that fat! Or am I?” he asked Jaune, who was stencilling yet another garbage man on Gaeta’s “Isola Ecologica”. 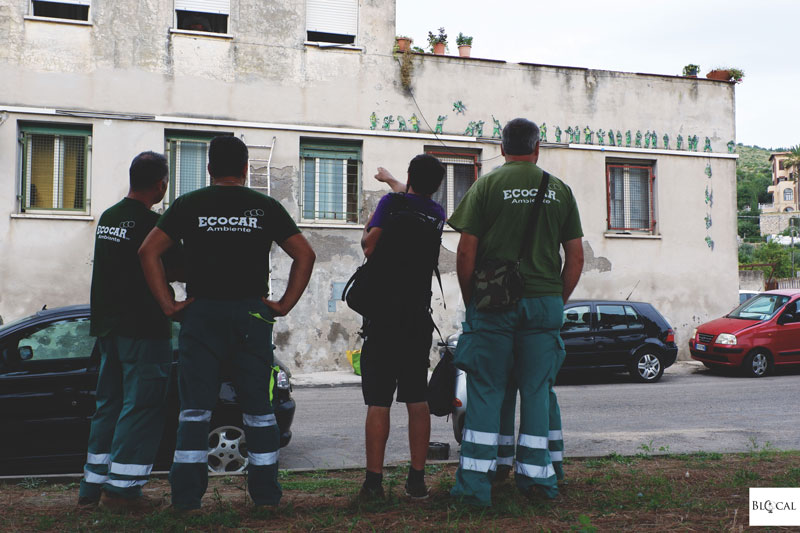 Noisy and messy, as portrayed in Jaune’s stencils around the world, Gaeta’s garbage men gathered in front of the mural at the end of their shift. They supervised the evolution of the artwork with eyes full of pride, constantly approaching Jaune with beers, jokes, and compliment.

Someone even brought his family to admire a piece that was finally speaking about them: the invisible men of the streets. Men whose hard work, while underappreciated, is fundamental for the functioning of every city.

Visible from the road, yet separated from it by a line of stocky Mediterranean pines, this piece, more than any of Jaune’s other works, helps people feel closer to garbage men. Symbolically, but also literally, since to appreciate it passers-by have to actually enter the waste collection centre. 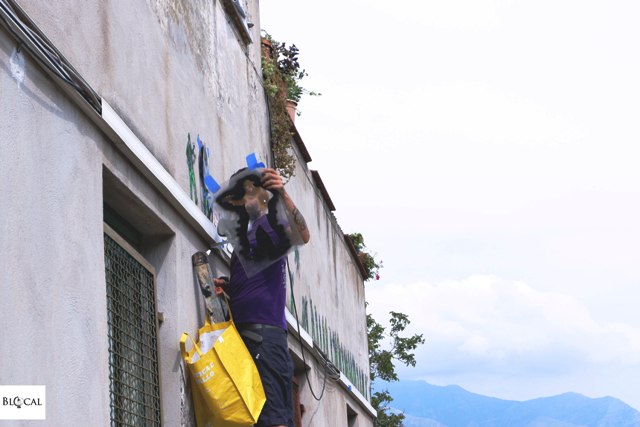 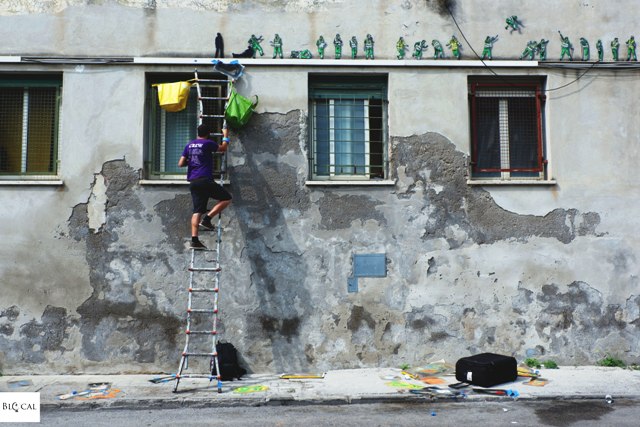 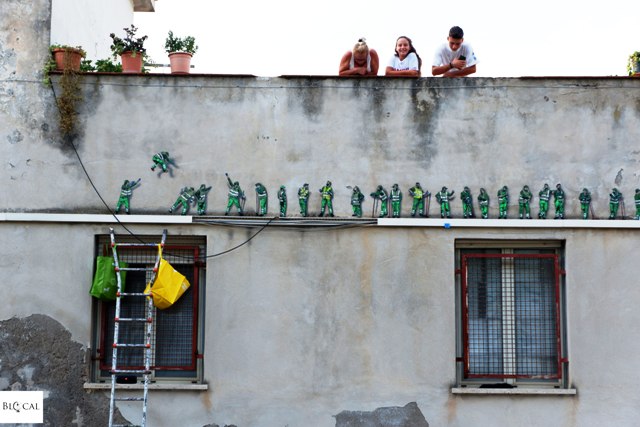 Before painting this mural, Jaune had warmed up with several small interventions around Terracina and the old city of Gaeta, turning a mundane drinking fountain into a waterfall or enhancing grey electric boxes right in front of Gaeta’s cathedral. 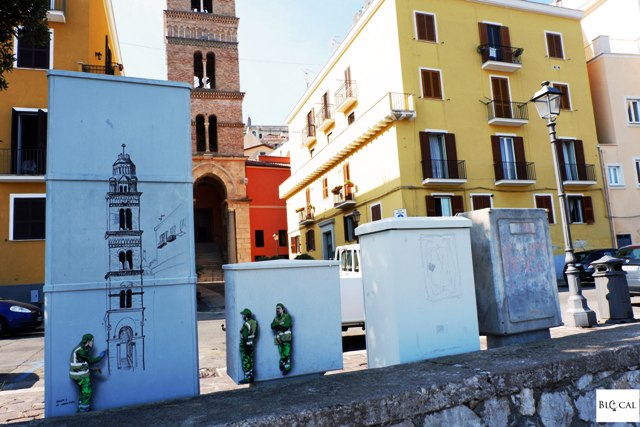 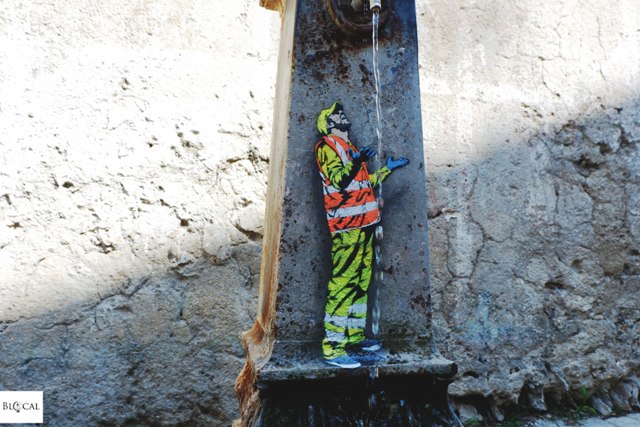 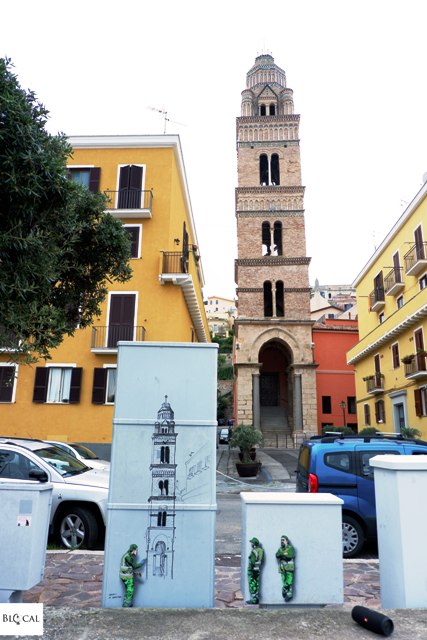 This latter piece is titled “Operaio d’arte”, which is one of his beloved puns and can be translated as “Worker of Art”.

These interventions aim at catching passers-by’s attention through irony and inspiring reflection on the paradox between visible and invisible: how often do we not see city workers, despite their fluorescent clothes? To free them from this condition of invisibility, Jaune features sanitation workers in his humorous stories, which he has stencilled all around the world since 2011, offering a new perception of city workers and life on the streets.

Like an author draws on the dictionary to write his novels, Jaune creates visual jokes by combining his stencils in a different way. He told me that right now he has around 150 different characters, including some that he has never painted. Many more are yet to be cut, like those from all the ridiculous pictures he took of Gaeta’s garbage men during their breaks. 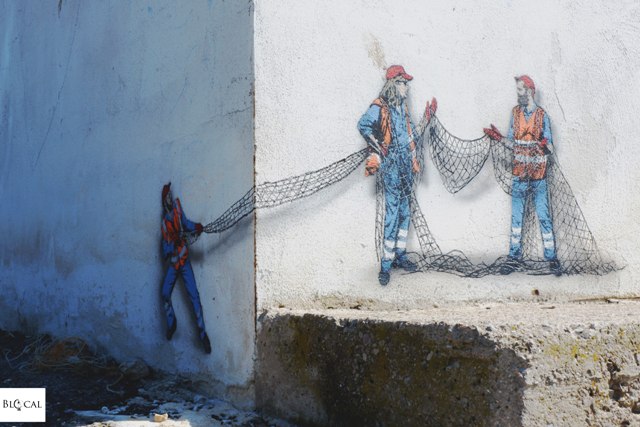 Since he speaks Italian fluently, he could mingle with Gaeta’s garbage men and join in those scenes of camaraderie that he enjoys painting on walls. They chatted about everything: from how he came up with this concept while working as a garbage man, to the best places to eat mozzarella in Gaeta.

However, the most frequently asked question was “Which one am I?” The answers evolved from mockery, jokes, and pointed fingers, up into a crescendo of self-identification and the pride of being depicted on a wall. 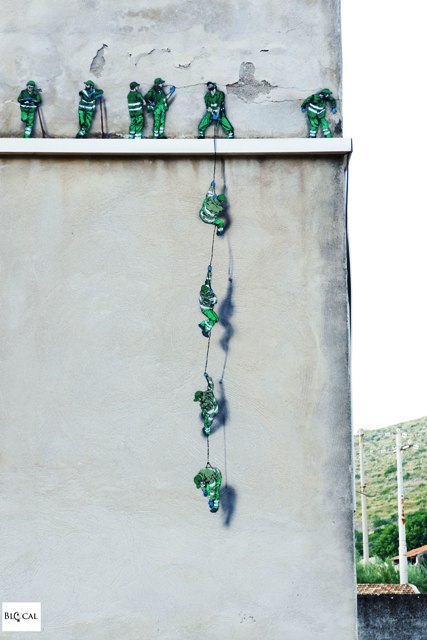 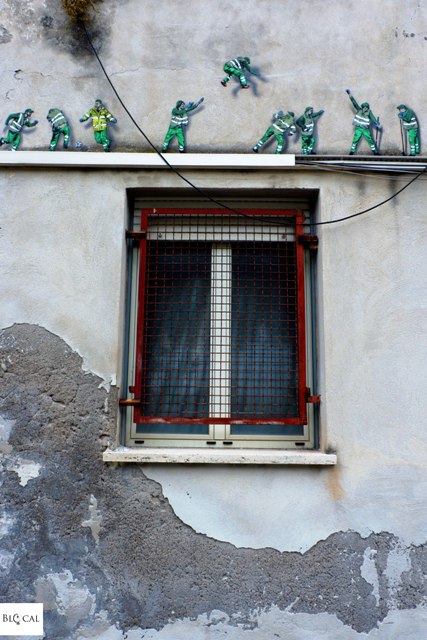 Written by our (intercity crew) member Giulia from BLOCAL blog.