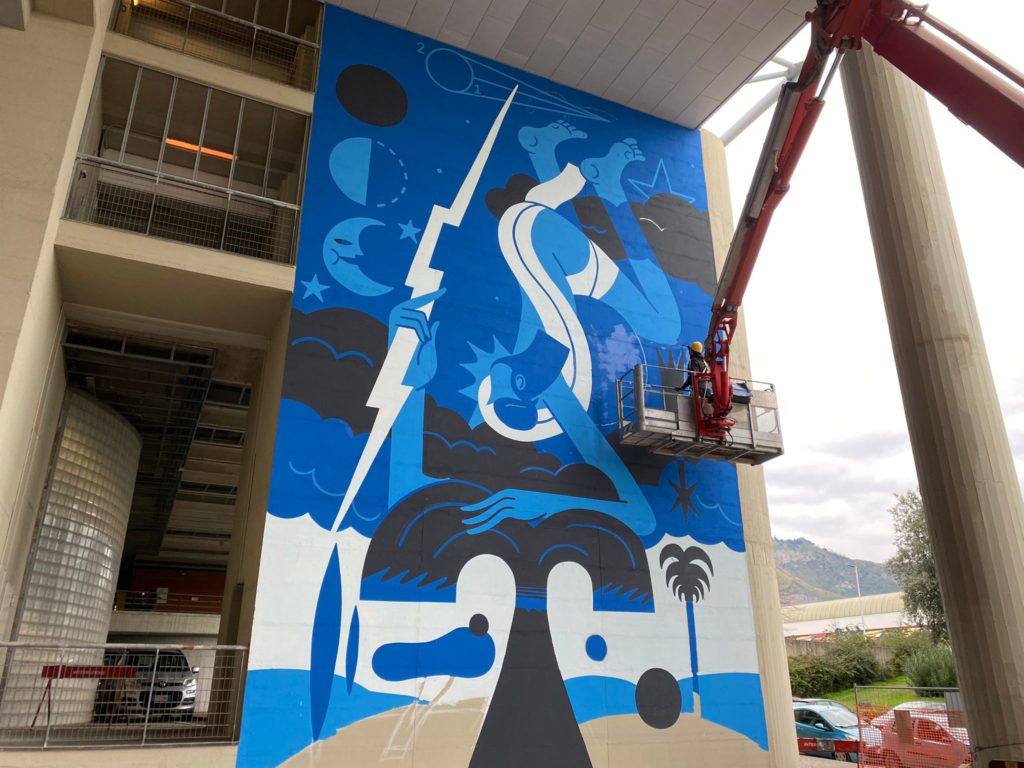 HollAndMe – Dutch Street Art In Six Italian Cities. The joint project by the Embassy and the Consulate General of the Netherlands in Italy and INWARD ends its journey in Naples with Joren Joshua.

The HollAndMe project is a part of the cultural program realized by the Embassy and the Consulate General of the Netherlands in Italy, called (S)punti di Vista, which, in 2021, brought new Dutch creativity suggestions to the Italian public, spurring a dialogue on social issues such as human rights, climate change and inclusion also through the disruptive power of Urban Art and the poetics of those who create it.

After the stops in Mantua (who featured two artists Erosie and 108 and the production curated by UCA Caravan SetUp), Santa Croce di Magliano (with the presence of artist Maaike Canne together with UCA ACAG – Associazione Culturale Antonio Giordano), Turin (with Chas as the artist and the UCA Il Cerchio e le Gocce), Lentini (with artist Nina Valkhoff and the Cooperativa Badia Lost&Found UCA) and Lecce (with artist Collin Van Der Sluijs and the UCA 167B/Street), the HollAndMe project closed the circle in Naples with artist Joren Joshua and the production curated by Arteteca. 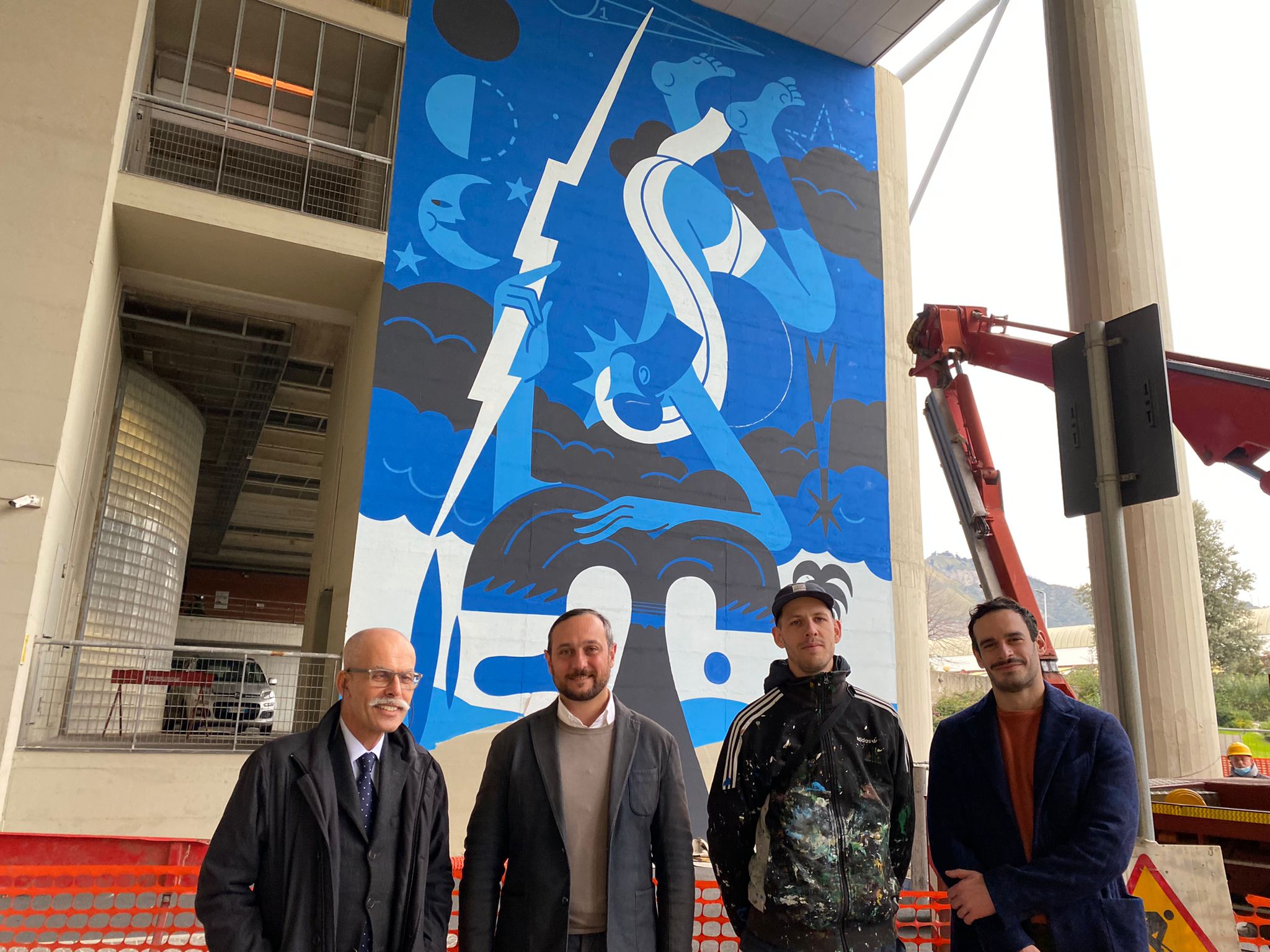 «We carried out an articulate and stimulating coordination in six Italian cities – this is the comment by Mr. Luca Borriello, the Director of INWARD – and we would like to thank the Dutch diplomatic system for such an opportunity. Our gratitude now also goes to the University of Naples Federico II, for hosting the last great work of art by Joren Joshua within the scientific compound in Monte Sant’Angelo. The mural, itself the result of great sensitivity and irony on the themes of science and nature, is already well integrated with the other works of art on campus, as it is a part of a more and more unique and culturally worthy system of urban creativity».

A Dutch illustrator and urban artist, Joren Joshua has intervened on a large wall of the Monte Sant’Angelo complex of the “Federico II”, University in Naples, a place already rich in murals drawn by internationally renowned artists, all arising from the synergy between the University Science Departments and INWARD. In one of the most used spaces at the University, featuring the presence of thousands of students day after day, Joren Joshua wanted to pay homage to the city of Naples and the scientific disciplines, as he created, using his characteristic illustrative style and several shades of blue and light blue, particularly dear to Neapolitans, some references to science, nature and the Greek mythology.

The large work of art, titled “Theory”, depicts Jupiter as he flies over the Earth, with his typical clouds, plants, stars, planets and other objects, tamed by the graphic line and scientific signs. A classic iconography that makes the viewer reflect on the dialogue between the divine and human milieus, as well as between science and nature. At the base of the painting, a large volcano emits benevolent clouds. «Much of our current civilization has its roots in Greek and Roman antiquity» – stated Joren Joshua – «and the role of one or more deities has played a fundamental role in human history. Life, as well as death, together with natural phenomena and sciences are concepts, themes and sectors that people have always been connecting to a superior entity, since ancient times, although progress and achievements should be wholly credited to mankind. Therefore, Jupiter, in this sense, is the god held accountable for the faults and merits of some events even today». 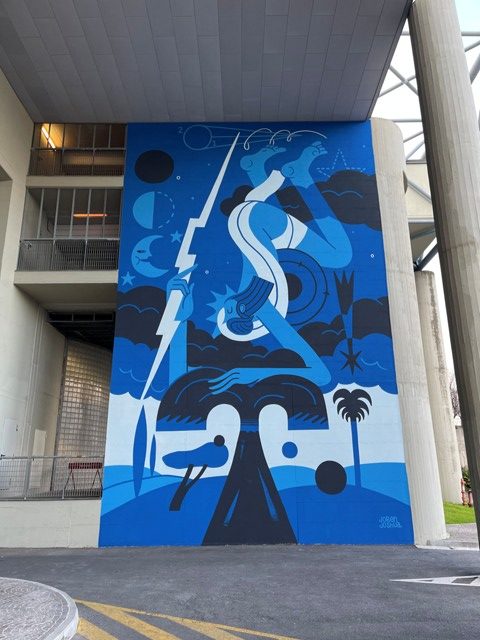 As he closed his speech, Joren Joshua was visited by Stefano Musilli, a Cultural Affairs Officer of the Embassy and Consulate General of the Netherlands in Italy, stated: «With the work of Joren Joshua in Naples, the circle of HollAndMe, which has brought Dutch urban creativity in six Italian cities, is closed. In addition to publicizing the work of these talented artists, the project has created new Italian-Dutch synergies and promoted opportunities for discussion about important issues, highlighting the added value of Urban Art, namely that of its public dimension. We would like to thank INWARD for the great coordination work and the Federico II University for the enthusiasm it has granted its spaces with».

The parterre of artists – established both on the Dutch and international scene – was immediately discussed by INWARD with Dennis Elbers of the Blind Walls Gallery, who compared the stylistic code of Dutch urban artists with the respective local expectations in Italy. Finally, it was up to the single ACUs to evaluate the fitness of every single artist, in relation to their territory, community and general context, and to take care of their production.