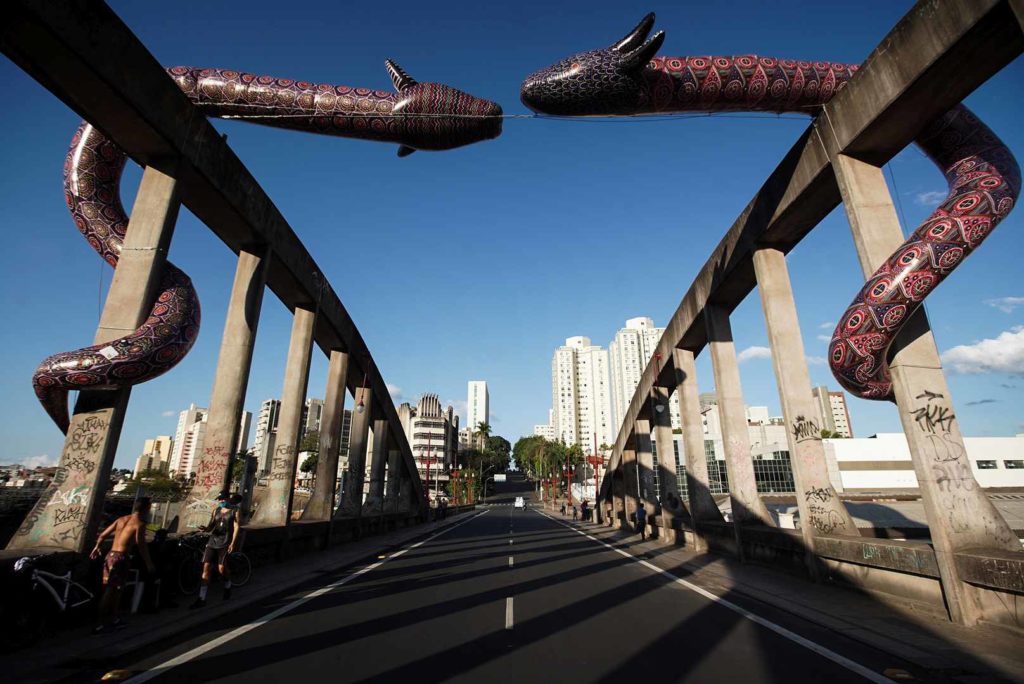 Installation “Entities” with a length of 17 meters is part of the 5th edition of Cura Festival which presents contemporary indigenous culture as the protagonist.

Two unique artistic installations take the streets and buildings of Belo Horizonte in the fifth edition of Cura Festival, which has the coverage of Instagrafite, one of the biggest urban art media in the world specialized in curating and discovering innovative art projects. Belo Horizonte is the capital city of southeastern Brazil’s Minas Gerais state. 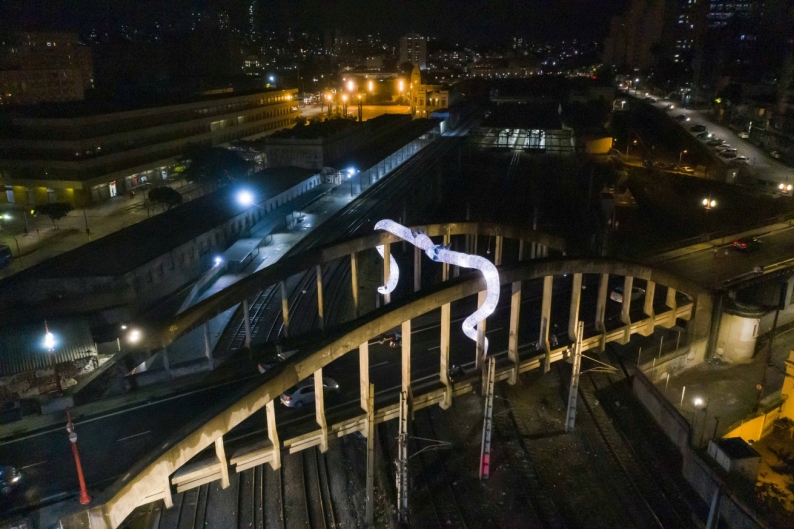 Going beyond the vividness of colors and lights, the installations bring social and political content made by artists of different ethnicities and identities, that brought their visions and experiences to each work. One of the highlights is the installation by the indigenous activist Jaider Esbell (Normandy / RR) from Makuxi (RR) tribe.

Two snakes of 17 meters long and 1.5 meters in diameter each form the artist’s work crossing Santa Tereza Viaduct, one of the most traditional points in the city center. The inflatable sculpture “Entities” is the first urban sculpture made by an indigenous artist in Belo Horizonte.

In addition to the big and illuminated aesthetic, the work carries in its content the artist’s poetics around “Big Snake”, described by the artist as the “great universal grandmother”.

“Big Snake” is always working behind the scenes to alert us, protect us and keep us alive in this world, as native people of these lands. It lives underground, in the great rivers, maintaining the movement of water, always pulsing so that the sources are maintained. So, the idea is make this animal sacred, an animal that is so commonplace in the Amazon itself to reflect on how much people do not value its wisdom, its medicine, its power and also distending this cosmology to our daily and current reality, which is the challenge that we have, to replace the mining with another form of economy. The objective is an expansion, trying to make people understand that Minas Gerais, as well as the Amazon, still remains strongly rooted in that economic base”, says the artist. 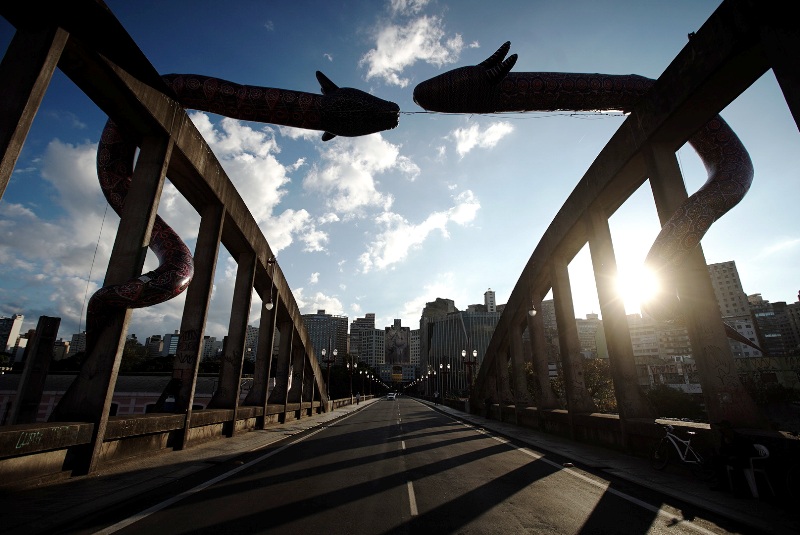 Jaider collects awards in literature, visual arts and cinema. His trajectory is marked by individual and collective works, both in Brazil and abroad. Currently, the artist lives in Boa Vista (RR), the capital where he created and maintains the first art gallery exclusively for contemporary indigenous works of art. The work “Entities” is on display at the Viaduct until October 22nd.

The second installation is located at Avenida do Contorno, where the windows of the Álvaro da Silveira building gain flags painted by Célia Xakriabá (São João das Missões / MG), Denilson Baniwa (Mariuá / AM), Ventura Profana (Salvador / BA), Randolpho Lamonier (Contagem / MG) and #coleraAlegria (miscellaneous / Brazil). In the concept of “flags extended to open paths”, the installation “Flags in the Window” dialogues with the current moment of social isolation, in which the windows of houses and buildings become the main and, sometimes, only contact with the outside world. 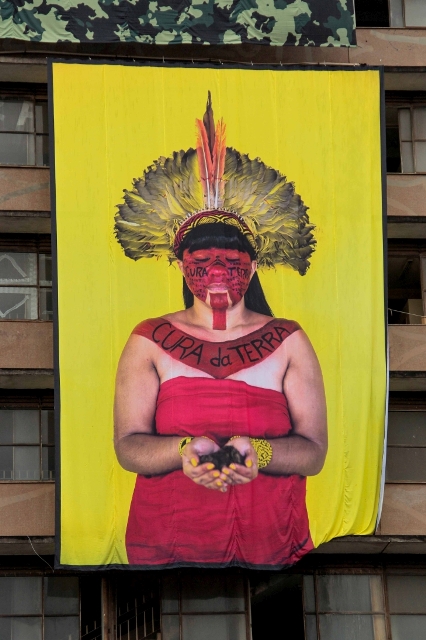 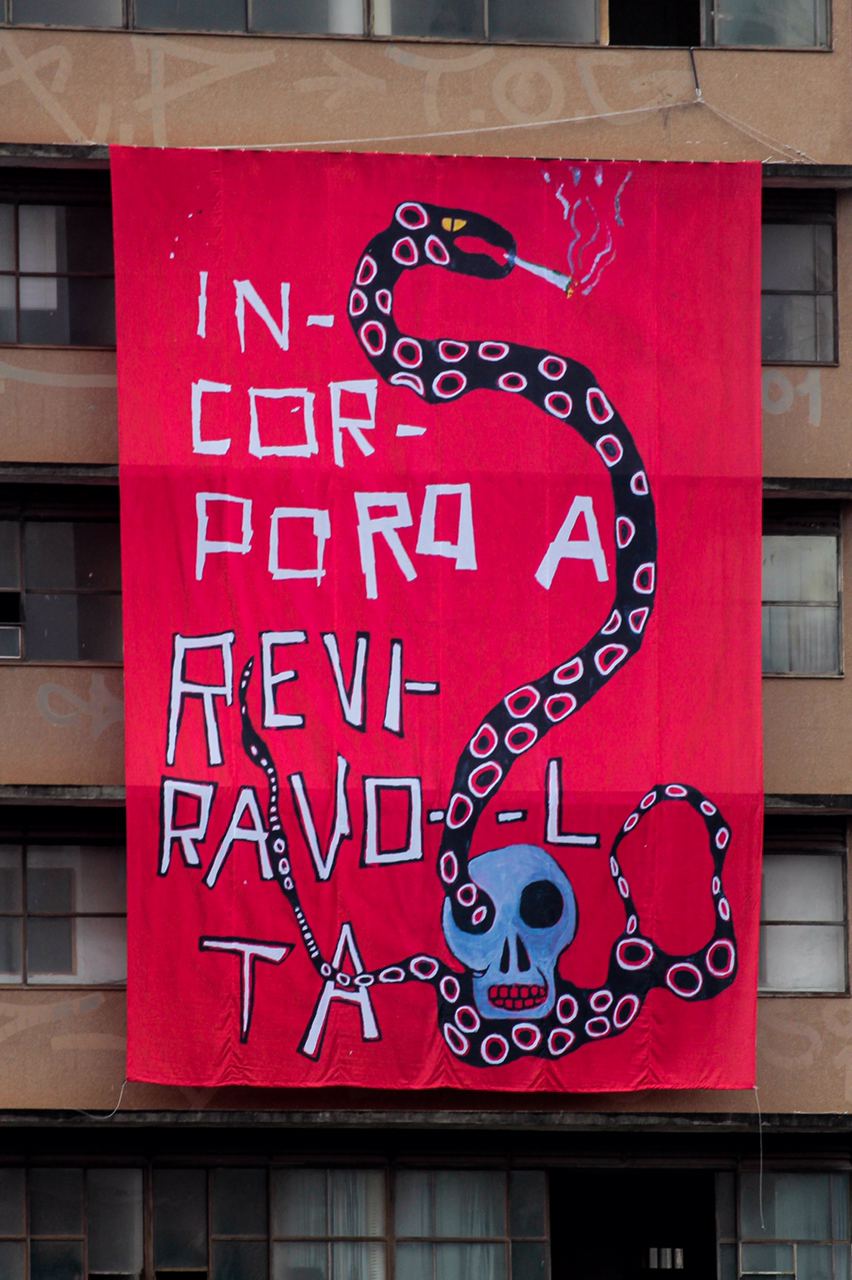 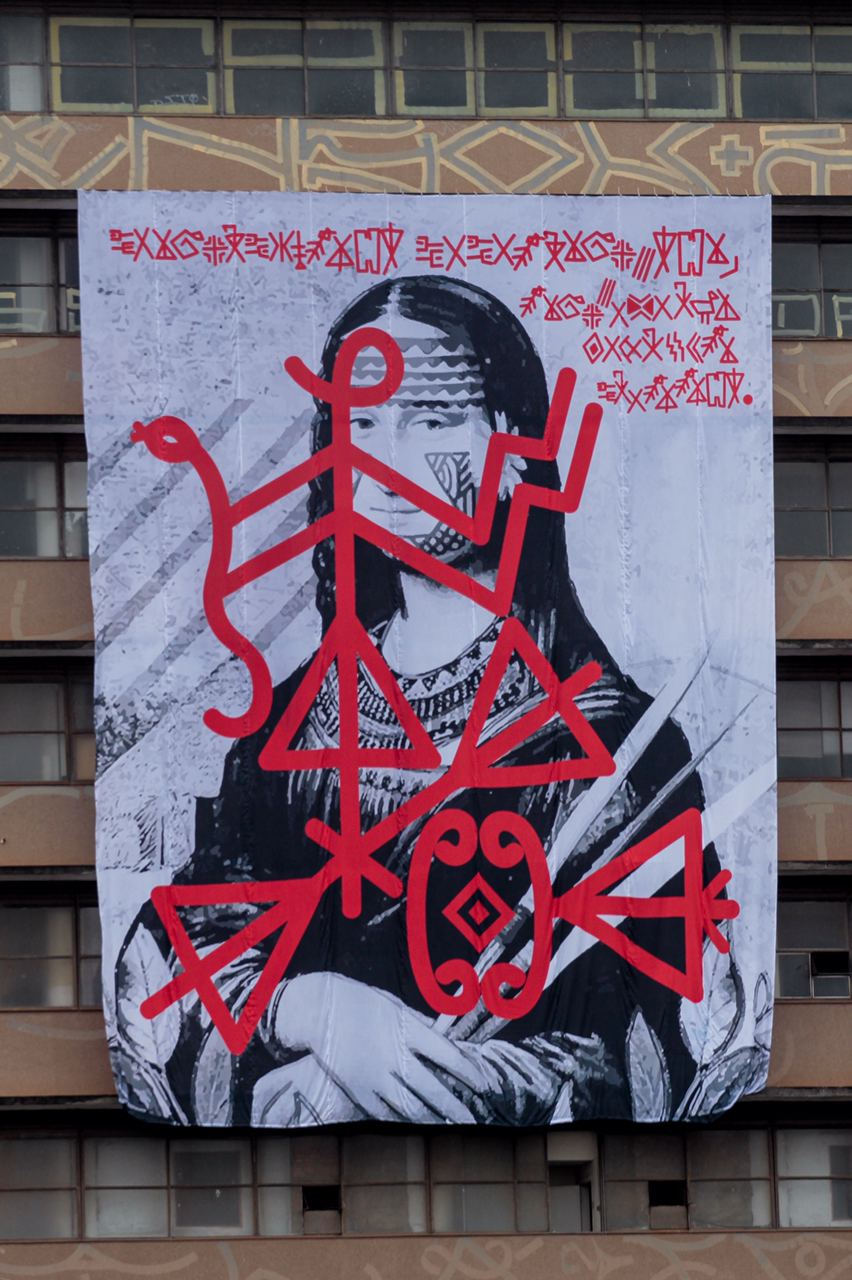 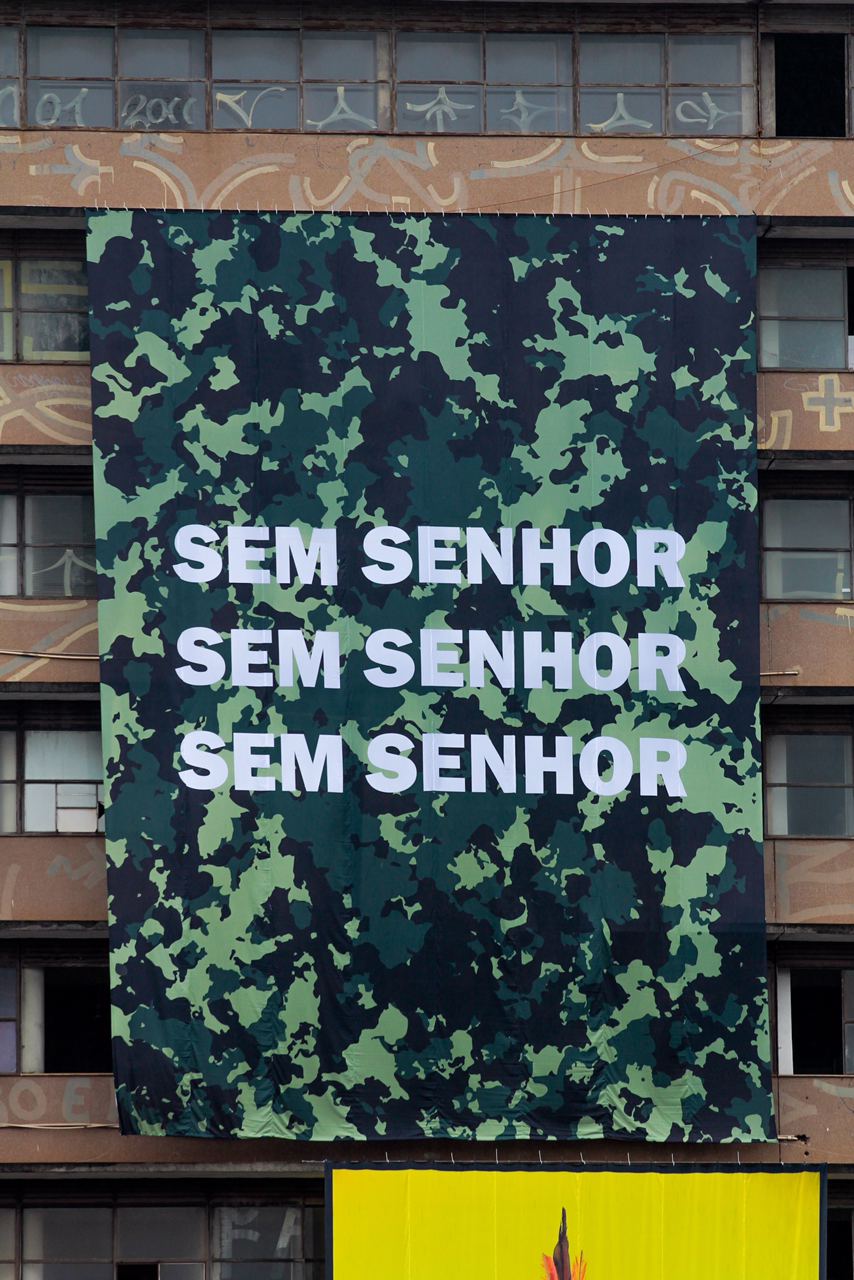 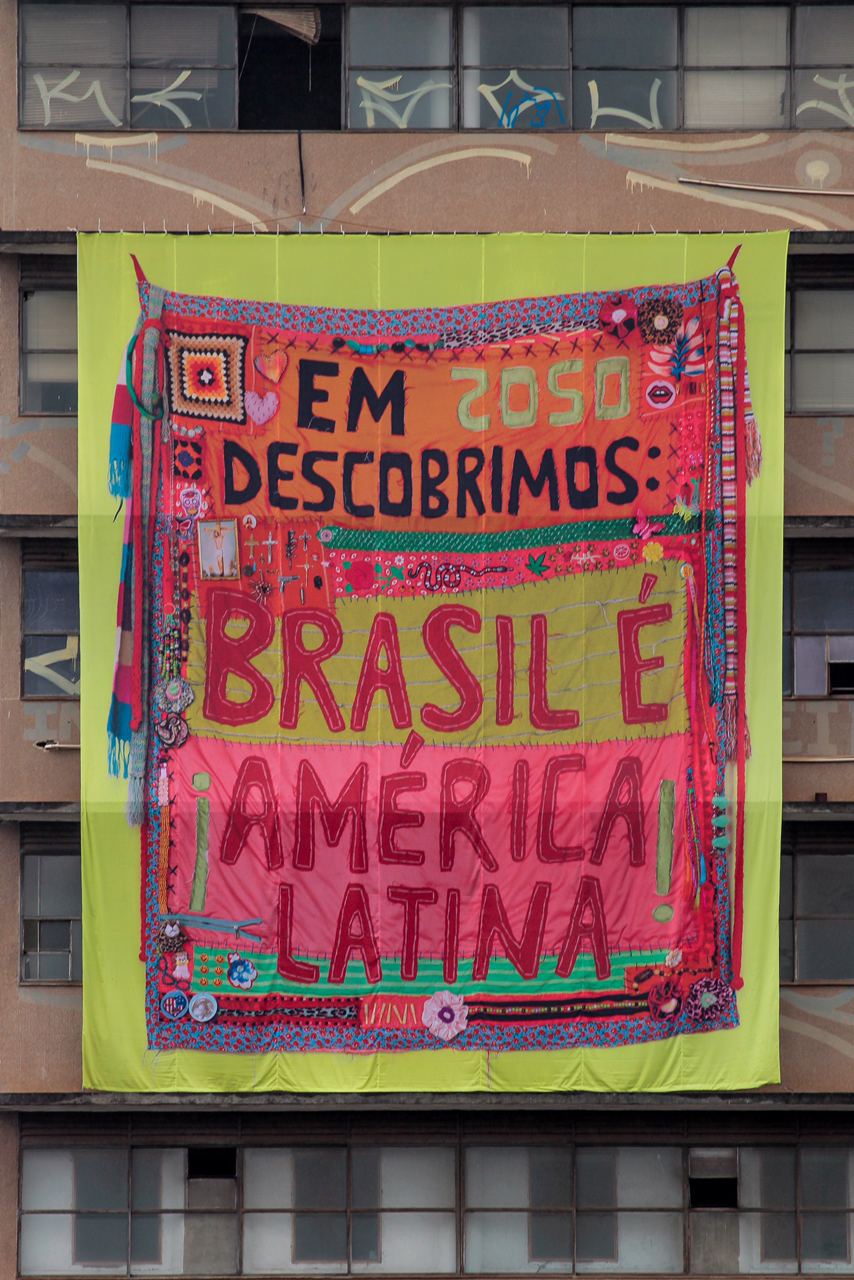 Fulfilling the age-old role of political manifestation and indemnity expression, the giant formats (between 102 and 210 square meters), carry on the fabric, the power of struggle and dream, sharing the facade with hundreds of pixos of this “agenda building” in the Center of Belo Horizon. 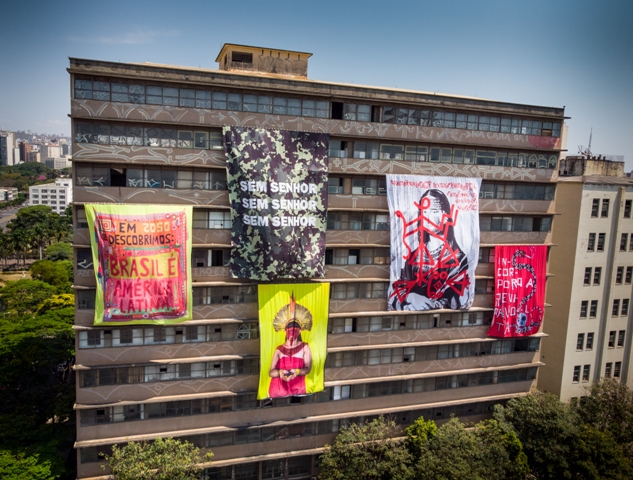 The building was built in the 1960s and housed part of the UFMG School of Engineering until 2010, when the transfer of the school to the Pampulha Campus was completed. The artistic installation “Flags in the Window” continues in the building until December 1st.

The Urban Arts Circuits completes its fifth edition with 18 works of art on facades and gables, adding 14 in the hypercenter region of the capital of Minas Gerais and four in the Lagoinha region, forming the largest collection of mural art on a large scale already made by a Brazilian festival.

CURA also presented BH with the first and unique Belvedere of Urban Art in the world. All paintings made in the hypercenter can be seen from Sapucaí Street.