We don’t even want to consider what the history of art might look like if it weren’t for the brilliant, virtuoso work of Dutch painter Vincent van Gogh. Unappreciated in his own lifetime, the tragic and tortured genius created some of the most astonishing paintings the world has ever seen. ‘Sunflowers’ is the work he’ll always be most famous for, but ‘The Starry Night’ is another that you’d recognize the moment you laid eyes on it.

Because of his posthumous fame, van Gogh is recognized by name and face almost anywhere on the planet (although having a famous one-eared self-portrait helps a lot with that). We’ve seen the painter turn up in some unusual places over the years. One of the more notable was in the long-running BBC television series ‘Doctor Who,’ where he was played to perfection by Tony Curran. The heart-wrenching episode ‘Vincent and the Doctor’ is considered to be one of the very best in the show’s near-sixty-year- history. It did a phenomenal job of representing Vincent’s unrelenting mental anguish while simultaneously highlighting his brilliance and the uniqueness of his vision. 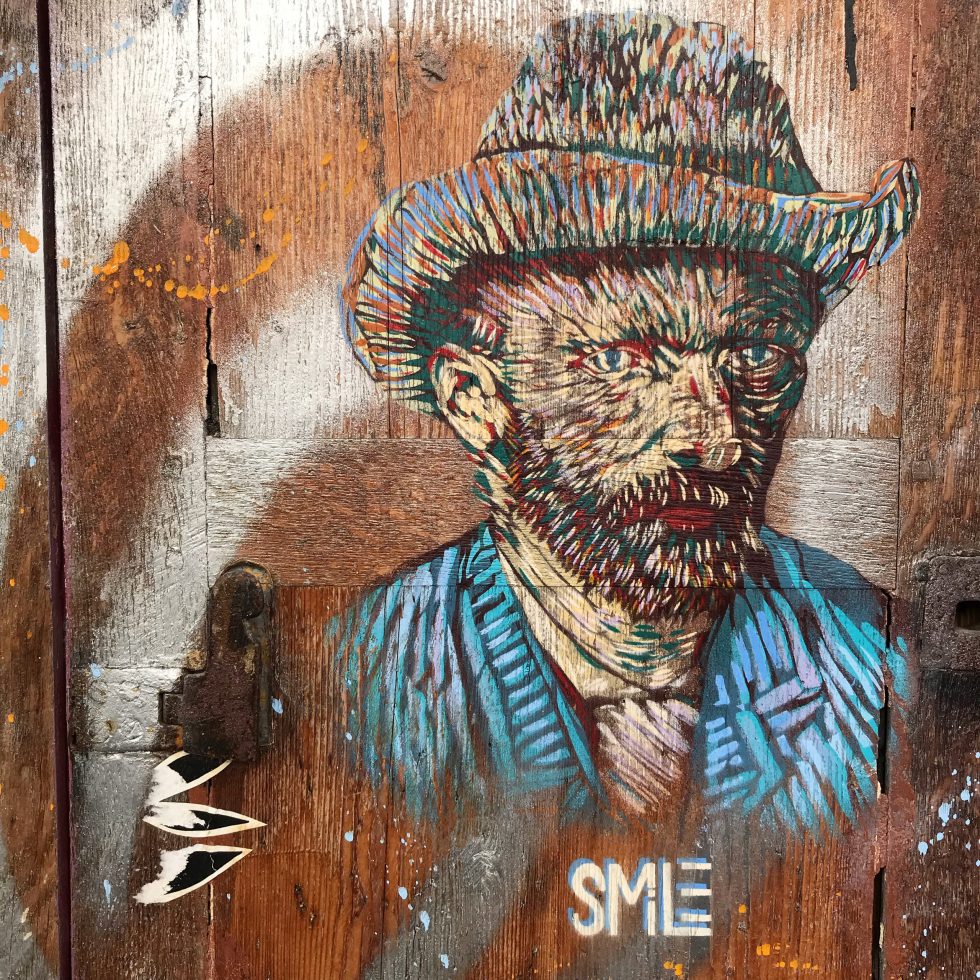 As if turning up as a character in the world’s longest-running science-fiction show weren’t enough, we’ve seen the painter’s work turn up somewhere even more unexpected in recent years – on the reels of a mobile slots UK that bears his name. The ‘van Gogh’ game was released for online slots websites by a company called Stockholm Gaming in April 2018. He’s not even the only famous painter to have his work immortalized in online slots or casino games; Leonardo da Vinci has enjoyed the same treatment. We weren’t aware that there was a particularly high crossover between online slots players and art enthusiasts, but apparently, we were wrong!

Having told you that the painter’s work has turned up in two such unlikely locations, it’s perhaps less of a surprise to hear that famous van Gogh paintings have also been replicated in the form of street art all over the world – but they have, and here’s where to look for the most awe-inspiring examples. 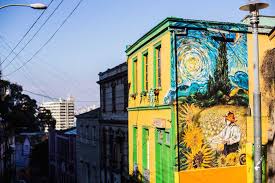 Teo Doro’s Valparaiso Mural
Chilean artist Teo Doro is the South American answer to Banksy, but he’s barely known outside his own country. He doesn’t seem to mind that, though – he’s quite happy decorating the streets of his country with breathtaking works of art, like his incredible van Gogh mural in the coastal town of Valparaiso.

The Teo Doro piece doesn’t just take inspiration from one singular piece of van Gogh street art, but three. There are elements of ‘Sunflowers,’ ‘Starry Night,’ and ‘Cypresses’ all combined together in the piece, which occupies the side of an old townhouse. The choice of location came before the decision to paint a van Gogh – Teo Doro noted that the building is now a hotel called ‘Girasoles’ – a translation of ‘Sunflowers,’ and so using van Gogh themes followed on naturally from there. As a tribute, the street artist has also included an image of van Gogh admiring his own handiwork in the finished piece – with, of course, a bandage around his missing ear. 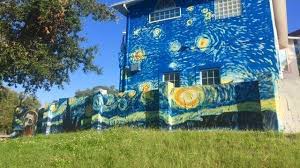 Starry Night In Mount Dora
Most people fall in love with Richard Barrenechea’s ‘Starry Night’ mural in Mount Dora, Orlando, Florida, the first time they see it. At almost forty feet long and stretched across an otherwise barren brick wall, there’s little doubt that it brings sparkle into an otherwise drab area. Unfortunately for Richard, not everyone is a fan. Even more unfortunately, those who aren’t fans include the local authorities.

Despite the obvious artistic merit of Richard’s work, the City of Orlando feels that it’s graffiti. The artist didn’t seek or gain any permission to create the work, and so he’s been ordered to remove it. Like Teo Doro, Barrenechea also included a depiction of van Gogh with his work and was outraged that the city didn’t see any artistic merit in it. He may win this battle in the end, though – the removal order was made in 2017, and although it’s never been rescinded, the mural is still there.

Starry Night For The Modern Age
As famous as he (quite rightly) became in the rest of the world, van Gogh will always be most closely associated with France. He created the majority of his most famous works during his time in France, and although they weren’t kind to him during his time on Earth, the streets of Paris have never forgotten the painter. Instead, they pay tribute to him with works like this dramatic reimagining of ‘Starry Night’ by Australian artist James Cochran. It takes the sky-scape of ‘Starry Night,’ but sets it behind a modern skyline, and a body of water all painted in the Dutch master’s distinctive style.

The artwork appeared on Rue des Cascades in the French capital in summer 2016 and remains there to this day, capturing lingering gazes who all who pass it on one of Paris’ most beguiling streets. Cochran, better known by his tag of Jimmy C, was previously best known for his Usain Bolt portrait from the 2012 Olympics, and his spontaneous David Bowie portrait that appeared in Brixton in the days after the iconic singer’s death. On balance, though, we think that this stunning re-interpretation of ‘Starry Night’ has both of them beaten.

We’d love to bring you a few more definite locations for Vincent Van Gogh street art, but unfortunately, we’re unable to. That’s not because there isn’t any out there – one simple Google image search will confirm that all of his most famous works have been committed to brick and stone multiple times. For some mysterious reason, though, people take the pictures and post them online without a caption, a location, or any further information. Is there a secret society of anonymous van Gogh painters out there, or are people just less forthcoming with information than they used to be? Some of the work we’ve seen is exemplary, and so it’s a tragedy that it’s going without the attention or recognition it deserves! Perhaps you know where we could find a great example – and the story behind it!

If so, let us know in the comments. Thanks!