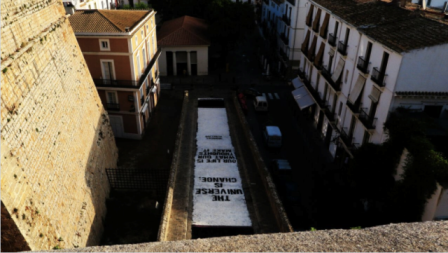 BLOOP International Proactive Art Festival delivers a guerrilla installation for its 2017 edition dedicated CHANGES. This installation is a new contribution to the OpenAir.Gallery, the Festival`s long term project to change the urban landscapes of an entire island.
It is made by Pineapple Crocodile and floral artist Montse Nadal, produced by Biokip Labs. This 5m x 50m painting is made purely by organic material on the island: salt, charcoal and flowers. Uniting nature and arts in an enchanting context, Dalt Vila of Ibiza, UNESCO registered human heritage. 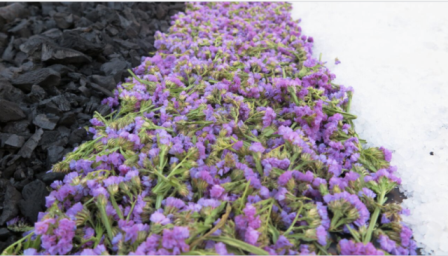 The guerrilla installation was made in day and due to the nature of the materials, ephemeral and lasted only two days. The original message written in charcoal is a quote by Roman emperor Marcus Aurelius “The Universe is Change, our life is what our thoughts make it”, illustrating the Festival`s 2017 theme.

This massive intervention was made possible by Pineapple Crocodile`s creativity, and the technical coordination by Montse Nadal, using Biokip Labs` logistics and production. 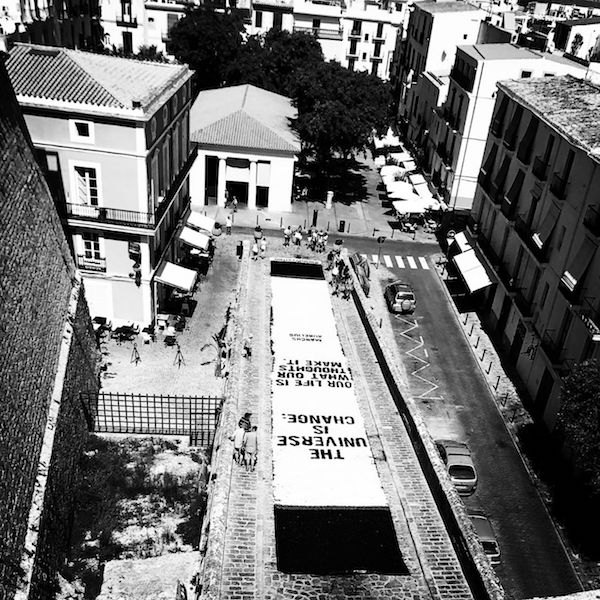 Pineapple Crocodile, is a multi-disciplinary duo based around music which has participated in BLOOP since its beginnings. In the past editions they have showcased interactive installations, video mappings, sculptures, photography and more. They have also bombed the streets of London, Milan and other cities around the globe. In October their latest album will be released, Chaotic Monologue.

Montse Nadal, is a Catalan floral artist whose creations are always made of organic materials. She has participated in the 2012, 2013 and 2014 of BLOOP. 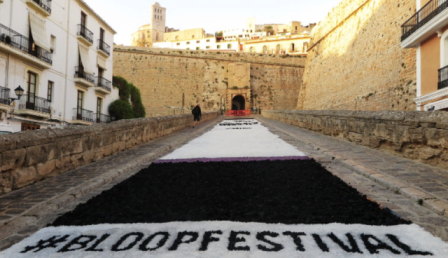 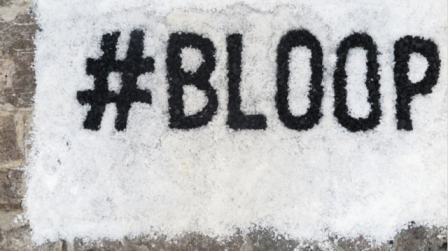 BLOOP Festival is the worlds first proactive arts festival where artworks are completed when there is the participation by the spectators. Every year there is social theme, which an international roster of artists build their aesthetics on. These pieces aim to encourage a universal audience “to think” proactively on the festival theme. The Event showcases a vast range of disciplines and activities from fine arts to new arts such as: giant murals, interactive installations, video mappings, paintings, workshops for children, sculptures, drive-ins, parties, installations, photography, music, expositions and more. One of the most oldest activities is the OpenAir.Gallery project, a true gallery under the skies to that currently holds more than 20 murals and installations across the island.

Admission is completely free as one of BLOOP`s founding values is ART IS FOR EVERYBODY.