“COLLEGNO SI-CURA” project recently started off, after the selection process was carried out by the jury of experts and the jury of citizens, this spring has seen the works of 3 international artists.

In early March, the Italian street artist Geometric Bang began his wall in Corso Francia 16. His work, although constrained by the geometries that well define his style, is a reminder of the 68 martyrs killed in the fascist massacre of the 29th and April 30, 1945 in Collegno. 68 in fact are the houses represented on the wall, which support and build the hope of a better future for an entire city. It is a dedication to the struggle for diversity, for peace, for mutual understanding to build together a civil and united society and thus to give to future generations a shining future, represented by the great sun over the city. 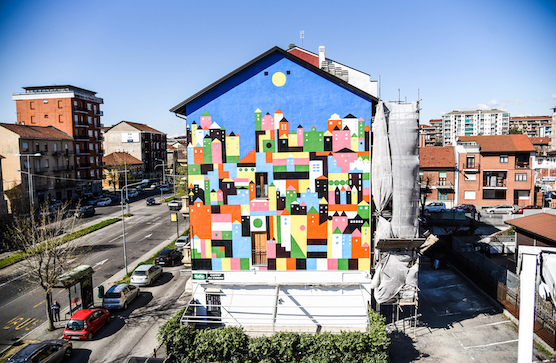 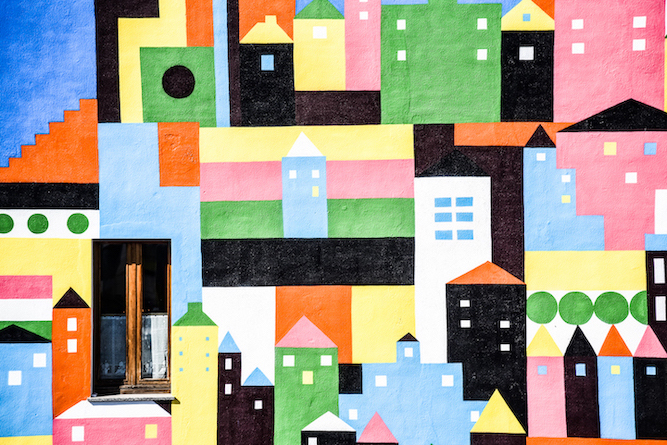 Almost simultaneously, Greg Jager (from Rome) began to trace the outlines of his abstract forms on the blind façade of the building in Corso Francia 73. His graphic sign is strong and recognizable, being son of geometric abstraction, and arises from a research on the plan urban planning and topographical of the territory of Collegno, to become a real tribute to the city.

Those geometric lines are in fact, the intersection of the city’s main arterial roads and the rigorous geometric scheme of the urban system that inspired the artist to create a series of overlapping graphic elements of transparency. The main colors are red and blue, from which secondary colors are created precisely in the intersections of geometric shapes that, depending on the point of view, offer a different perspective and interpretation of the work. 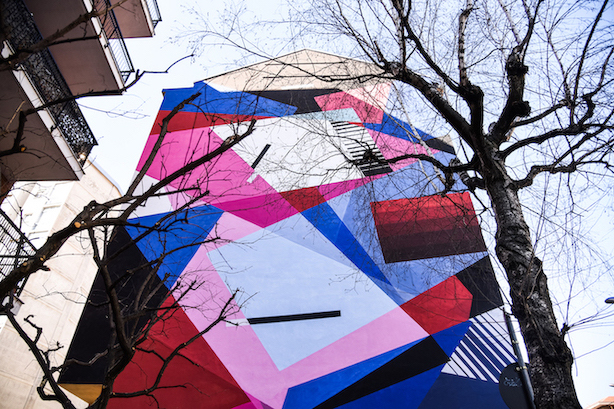 The last to intervene were the two Mexican street artists Himed & Reyben, very young but already considered among the best stencil artists in the world. The wall of Corso Francia 39, just above the exit of the Paradiso metro station, has seen the appearance of interlaced silhouettes of hands, symbolizing, even in their case, the link with the events of the Grugliasco and Collegno massacre in April of 1945. The representation of the hands is intentionally generic in order to favor the identification, simultaneously creating a sense of belonging to the history of the place and to the territory in which the inhabitants live. The colors used are all in gray scale, with some color details. 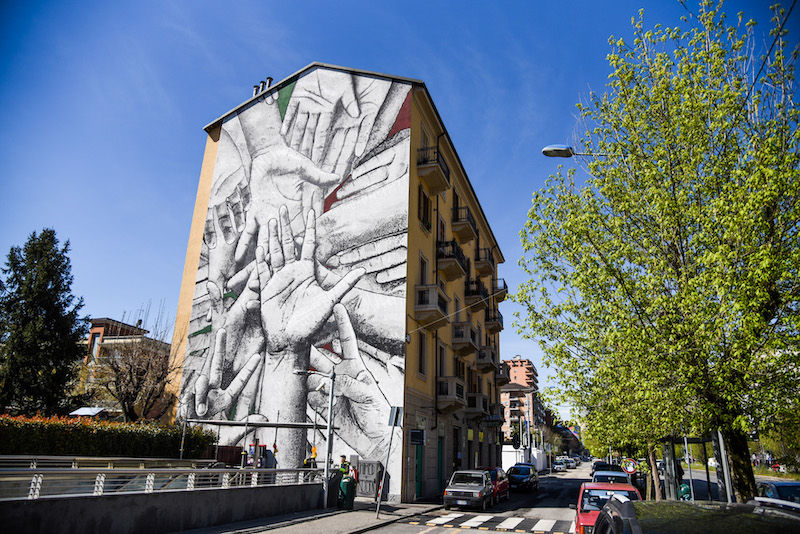 For the part relating to the workshops both Greg Jager and Himed & Reyben worked together with some classes of local schools. In the case of Greg Jager they learned the tape art technique applied to geometric shapes, while with the Mexican duo they worked on the preparation of the stencils and used them on the wall of Corso Francia 41, not far from the main wall, to represent what the two artists they identify as “the importance of the embrace”. The main focus of the wall is in fact the wall’s corner in which the two human figures meet and embrace, symbolizing the universal language of love.

BIO ARTISTI
Himed&Reyben is a Mexican duo of street artists specialized in stencil technique and working mainly on public space and large formats. They took part in festivals, exhibitions, participatory workshops, with artistic residences in Mexico, Spain, Sweden, Belgium, Denmark and Estonia. Their work focuses on social issues and the goal of their murals is to paint for people, with people and people itself. facebook: himedreyben | instragam: @himed_stencil @reyben_one 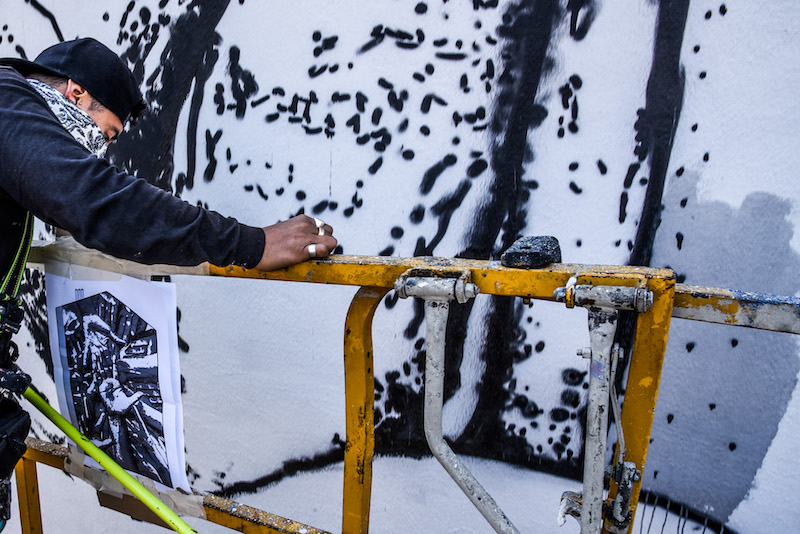 Greg Jager is a visual artist who focuses his art on abstract art and architectural drawing. Born in 1982, he took its first steps in street art as a writer and skater around 1997. From 2004 he started working as a graphic designer and after 10 years he decided to dedicate himself completely to his artistic production, creating a personal abstract aesthetic. His influences are kinetic art and Italian design and his goal is to work on the relationship between graphic design and urban spaces. facebook: Greg Jager | instagram: @greg.jager 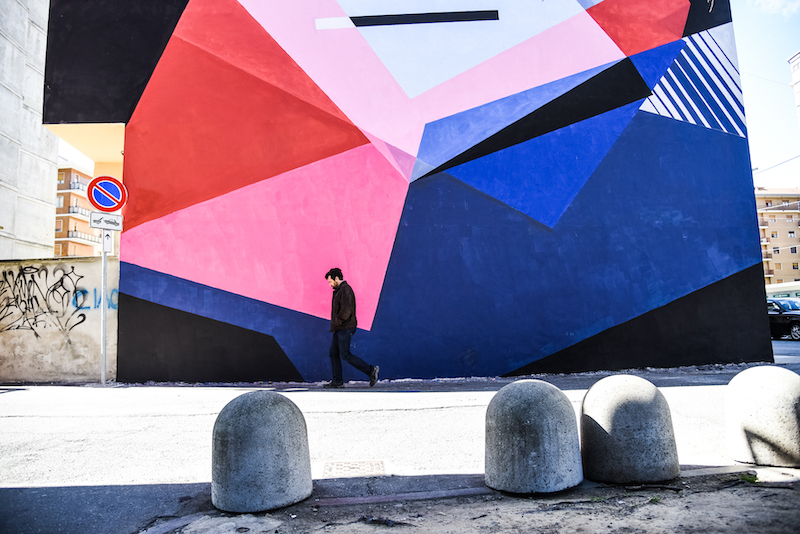 Geometric Bang. Born in Lodi in 1984, he began his artistic career in 1998, thanks to a very lively scene around his city. He focused his attention on faces, hands and animals and the study and importance of color. His work is based on the study of the textures and colors, aimed at the use of characters, animals, plants, objects. Since 2006 he has participated in various exhibitions and events in Italy, France, Germany, Spain, Russia, China and South Africa. facebook: Geometric Bang | instagram: @geometricbang

THE PROJECT
The Collegno Street Art project was promoted by the Municipality of Collegno in collaboration with Fondazione Contrada Torino Onlus and is part of the wider project “Collegno SI-CURA” presented in the TOP METRO candidacy of the Metropolitan City, with the aim to set up a consolidated method of “intervention” in the territory capable of combining physical and material care with social actions and intangible activities to increase real and perceived levels of safety, care, regeneration and urban “ease”. Street art, thanks to its strong communication and impact on the territory, has become an instrument increasingly used by Public Administrations to help regenerate and redevelop degraded or marginal areas of the city.