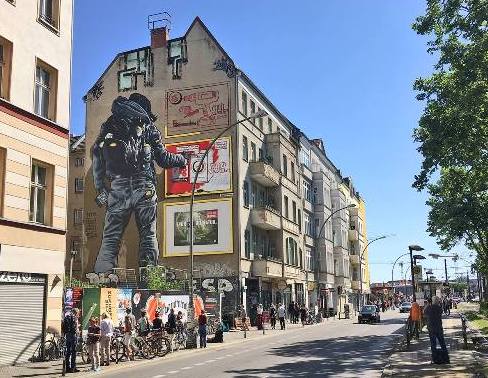 The mural which is an anamorphosis image is meant to give everyone the same chance to get the final official photo. The artwork can been seen properly from just one specific standing point. The artist calls this a « democratic perspective » because it gives no advantage to people with specific access. Its there for all to capture and observe with no distinction.

MTO has managed to raise eyebrows once more and his return to Berlin for the latest mural is highly contextueal and below you can read exactly in his own words what this mural is all about!

” In May 2018, I got invited for the first time to paint a large mural in Berlin. Coincidentally, this marked both MTO’s 10th anniversary as a street artist as well as my exit from the city 5 years ago; so the invitation was special to me.” 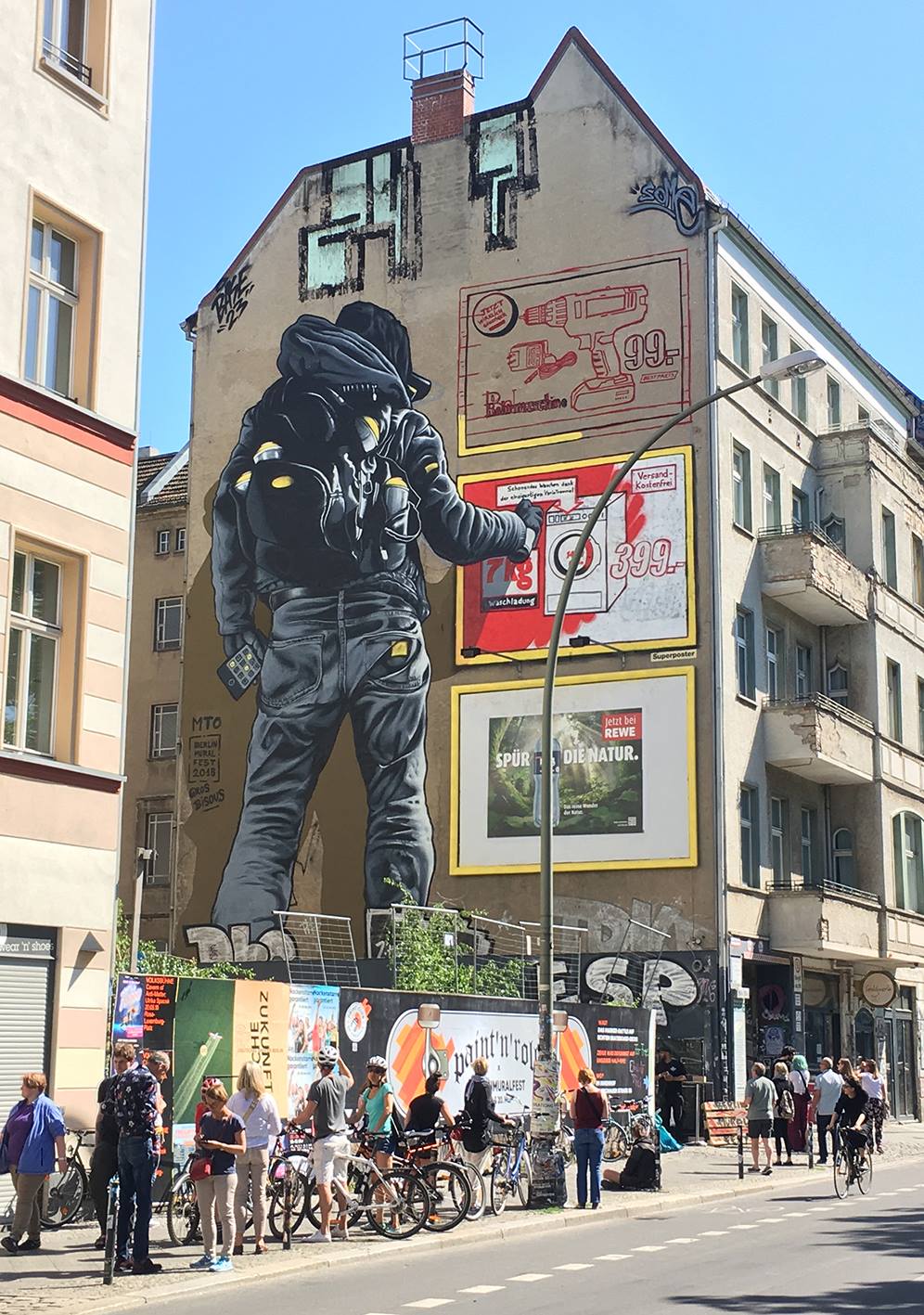 ”The Berlin Mural Fest organizers gave me a very nice surface with great placement but the wall already included a large advertisement. By creating a mural there, I knew the work would also create a lot of hype for this particular spot. Big murals are photographed by thousands of people every year in a city like Berlin. So as I couldn’t avoid the billboards presence. I thought it was a good occasion to speak about the elephant in the room, the greatest taboo : the use of street art muralism for commercial purposes. And Berlin in 2018 was definitely the right place to speak about it.” 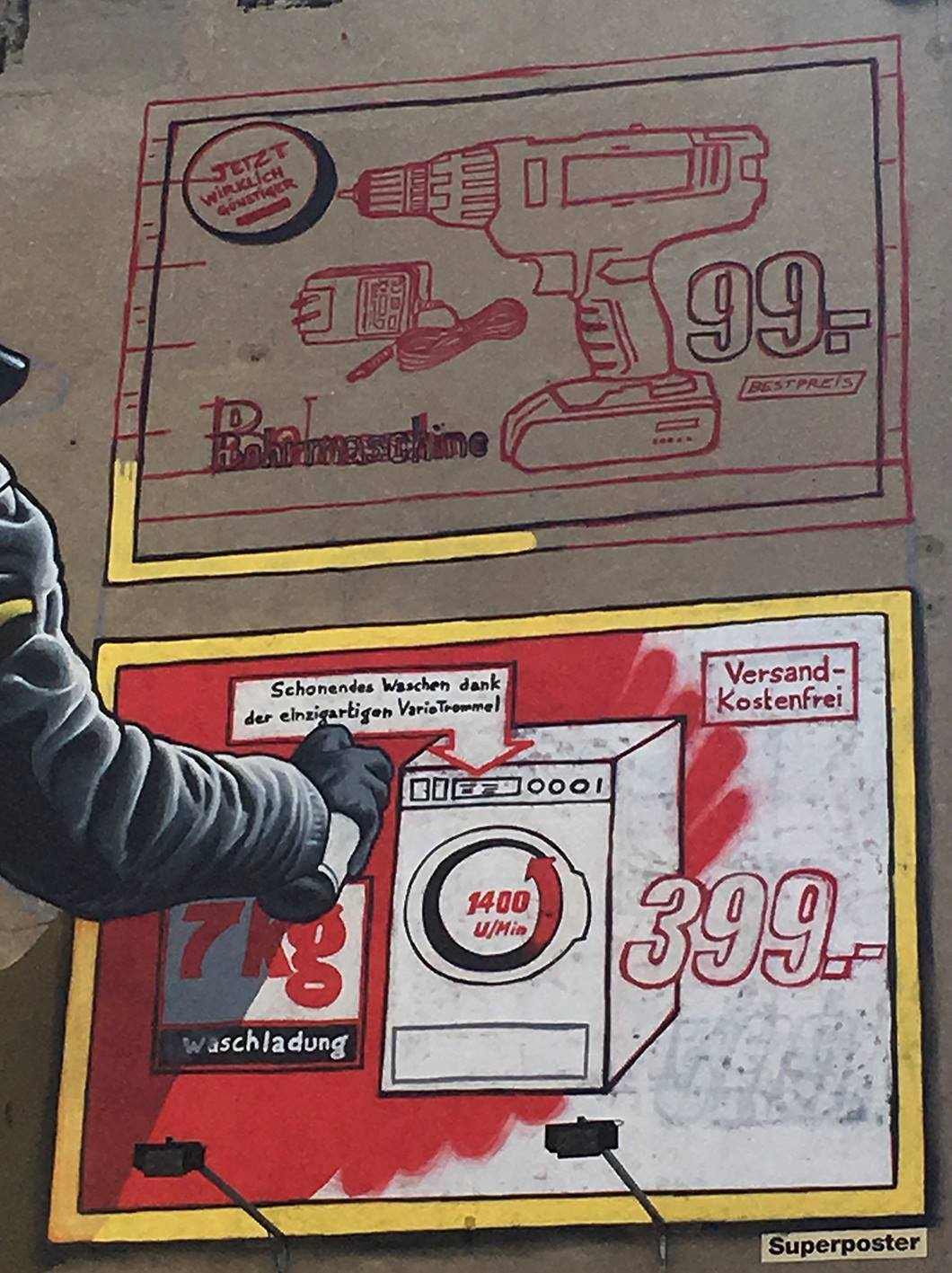 ”I actually first created this sprayer image in 2008, for a mural project which never materialized and that picture just stayed on a hard-drive for a decade. But, when I made the image, I did it to symbolize a booming movement that was making a new revolution into the art world. And I meant it at the time. I did believe in an unstoppable growth for graffiti, street-art and urban intervention into an art revolution. But, ten years later, the very same image has taken on a different meaning to me. The jean/hoodie/backpack style portrayed in the image is no longer a symbol of underground counter-culture. Today, there’s nothing revolutionary represented by that dress code. Call me naive, but at that time it seemed like a world-changing-tool, now, it just feels like an urban-oriented-marketing-costume similar to the famous Che Guevara iconography or any Obey apparel.”

”It is well known that large scale “street-art” muralism has generated an increasing interest from city councils and real estate investors all over the world, as the practice now plays integral part in the gentrification process. Not to mention the real commissioned publicity paintings as satirized here, the city-sponsored and/or brand-sponsored decoration of building facades contributes to make lower-cost areas more attractive leading to higher rents and increasing capital in the area. And with that, brings an entire peripheral economy that includes street-art galleries, street-art tourism, street-art exhibits, street-art merchandising, art fairs, etc … Hence the increasing attention brought to decorative artists whose work federates opinions and suits for instagram photoshooting backgrounds.”

”In my case, I like being a muralist, and I’d like to keep being one. But I don’t want to help this process happen. So the only way I found to fight against it is to use openly political and always contextual content in my murals as a way to try to connect with local communities, create debate and maybe block (or at least slow down) the economical exploitation of it. But does it really work and Is it enough ? I don’t know …. When you see that even Blu has to erase his own works to make sure the system couldn’t use it to sell condos” …. ( https://www.theguardian.com/commentisfree/2014/dec/19/why-we-painted-over-berlin-graffiti-kreuzberg-murals )

”Case in point, two days after finishing the wall I briefly listened to a street-art-tour being given in front of the wall. I heard the guide saying that the mural was made to show us how an advertisement is made ». Even an English tourist asked him “Are you sure this is not a critique of the way money is involved?” The tour guide answered “Well … I don’t think that the appliance store is a sponsor of the wall.”. Then they left for the next wall ….”