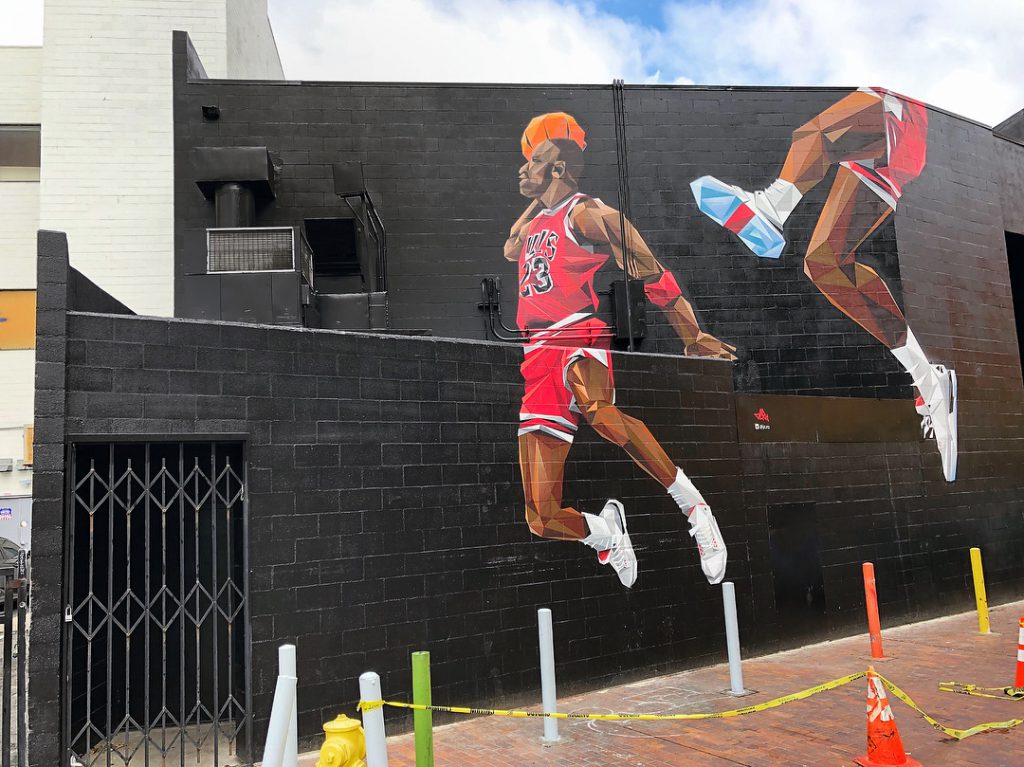 Street art and basketball share a special connection. Many creators and street art admirers are also basketball fans. On the flip side, urban artistry informs the sneaker and fashion trends championed by NBA stars.
In celebration of the bond between the NBA and street art, let’s look at four recent murals dedicated to some legendary pro ballers.

The biggest news rocking the NBA world over the past year is undoubtedly the arrival of LeBron James in Los Angeles. Acclaimed sports muralist Jonas Never commemorated the occasion in July 2018 with a very lifelike portrait of the newly-minted Lakers star on the side of a building in Venice.

Bearing the title “The King of LA”, Never’s mural captured James in a Lakers jersey, shooting his trademark steely stare. Unfortunately, the mural was vandalized several times over the course of a few months and was eventually removed.

A second LA-area James mural, celebrating the King’s westward migration, was also vandalized. Reportedly by an artist with the Twitter handle jamtjohnson, “The King Becomes the Witness” featured Lebron looking on to a row of Lakers legends including Magic Johnson, Shaquille O’Neal, and Kareem Abdul-Jabbar – all seated atop home venues the Staples Center and the Great Western Forum.

His Airness will forever be most closely associated with Chicago, but Michael Jordan’s influence is worldwide–which explains why one of the G.O.A.T.’s best mural features is actually in Los Angeles.

Located on the Fampion X shop at the corner of Melrose Ave. and N. Vista St., Hashim LaFond’s portrait captures a youthful Jordan in Bulls red from the jersey numbers up. MJ is seen glancing over his shoulder with that familiar “you just got schooled” look he often gave opponents on the hardwood.

The Oklahoma City Thunder are babies in the NBA, existing a shade over ten years. But that doesn’t mean the fanbase isn’t wildly passionate – and artistic. Just ask street artist Robert Peterson, the creator of a Russell Westbrook mural in Lawnton, Oklahoma, a small town 80 miles south of Oklahoma City.

Peterson’s homage to Westbrook is a stunning portrayal of the eight time All-Star. Set against a stormy sky background and streaking lightning bolts, the mural features Westbrook in a focused pose, intently staring down his opponent. The portrait is ultra-realistic, even depicting the sweat on Westbrook’s head. 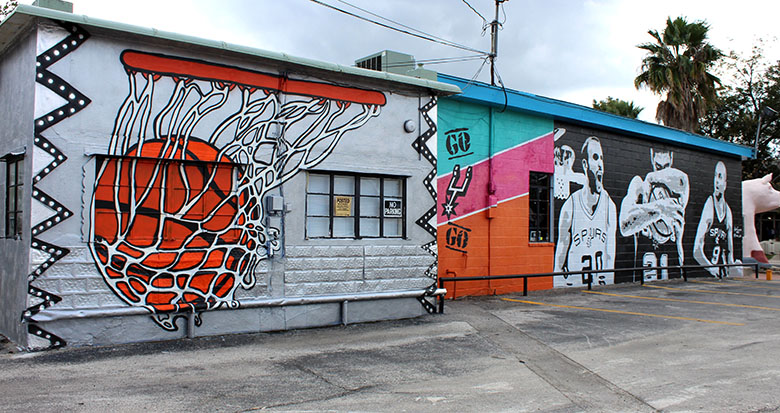 San Antonio, Texas is accustomed to NBA greatness. It’s also a town with a thriving street arts scene. Expectedly, a number of murals paying homage to the Spurs have popped up around the city in recent years. Perhaps the best work is the mural at 801 S. Presa St. by San Antonio native Albert Gonzales. Spanning almost an entire city block, the art installment features the Spurs’ historic big three superstars in action: Tony Parker, Manu Ginobili, and Tim Duncan.

Gonzales, who estimates that 85% of San Antonio residents are active Spurs fans, invited the community via social media to help him out on the day of the mural’s rendering. Dozens of people answered the call, making this a truly special piece of street art.

The NBA is an endless well of inspiration for fans of all personality types and interests. Some are stats driven, following daily the ESPN fantasy league developments or Oddschecker NBA championship predictions. Others take a creative approach by painting these amazing works of street art.

The message here is simple. No matter how NBA teams or players influence your life, embrace it. And if you’re inclined, turn the inspiration into art!