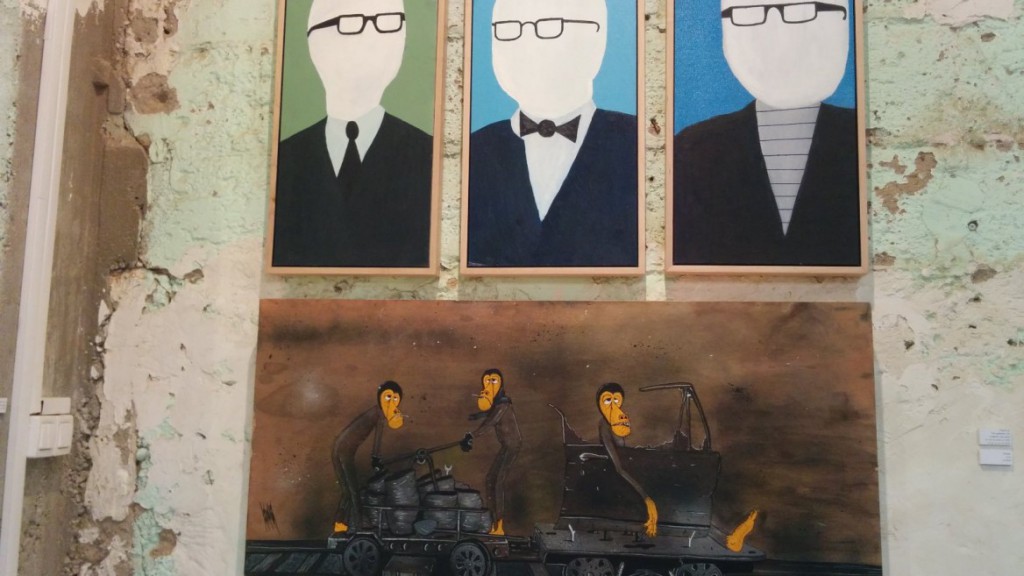 Street art is one of the most ascendant forms of visual expression in cities across the world. In Israel, the unofficial street-art capital is the bohemian South Tel Aviv neighborhood of Florentin.

“This isn’t a regular concept, because street art belongs on the street and now it has a house,” says artist Shira Gepstien Moshkovich as she shows ISRAEL21c around the new Street Art Gallery housed in a former carpenter shop off the intersection of Abarbanel and Yedidya Frenkel streets. “But it’s not a gallery like other galleries. It matches the concept of street art — it’s not a white cube like a museum gallery.” Indeed, the raw space provides an authentic context to the rotating exhibition.

Commercializing an essentially anti-establishment outdoor art form runs the risk of compromising its character. Yet bringing them indoors assures the works’ permanence, allows admirers to own them and helps the artists monetize their talent.

“In 2011, there was an exhibition of street art in the Helena Rubinstein Pavilion for Contemporary Art at the Tel Aviv Museum of Art, and that represented a big step for the artists. But here it’s like their home,” says Moshkovich. “The whole story of street art is here in Florentin.” Though many of the works hanging in the Street Art Gallery mirror those painted on the walls and buildings of the neighborhood, here you can buy the artworks as well as street-art phone skins and archive-quality photographs of street art by the internationally renowned Daniel Siboni, who co-owns the gallery with Eli Edri. Edri also features many Tel Aviv street artists at his two-year-old Pachot M’Elef (Under 1000), a gallery promoting original Israeli artworks priced at less than $1,000 (that’s dollars, not shekels). Located at 54 Abarbanel Street near the Street Art Gallery, Under 1000 is managed by Moshkovich and Niv Borenstein, both graduates of Midrasha School of Art and former gallery co-owners.

“We have 150 artists and more than 600 works of art at any given time. You can find top artists of Israel, young artists, photographers and street artists. The commonality is that everything costs under $1,000,” says Moshkovich.

“The same artists present their work for higher prices in other galleries, but here they agree to sell a few works cheaper so that people can have art. This is the whole idea. Everyone deserves to have fine art.” This arrangement enables artists to sell more pieces and build name recognition and wider exposure. “We have a large assortment so everyone can find an original piece that speaks to his heart and get it at an affordable price,” says Moshkovich, adding that purchases can be shipped worldwide.

Under 1000 features everything from Menashe Kadishman’s world-famous sheep to the Stay Puft Marshmallow Man by a Tel Aviv artist who goes by the street name Staypuff.

Under 1000 has artworks on its roof for the benefit of apartment dwellers across the road. Photo; Abigail Klein Leichman

Meshuna at 112 Herzl Street in Florentin also displays street art among its exhibitions. It was opened two years ago by wire artist Anton Avramov and street artist Oren Fischer. “Street art is popular worldwide mainly due to its social and creative accessibility,” Avramov told ISRAEL21c. Taking it from the public sphere into a gallery “breaks the boundaries of the art establishment,” giving the artists access to mainstream art-lovers while drawing in people – including teenagers – who don’t ordinarily go to museums, he adds. “Street art is an integral part of the urban landscape,” says Avramov.

Technically speaking, the first dedicated street-art gallery in Florentin was Tiny Tiny, opened about two and a half years ago at 18 Florentin Street by street artist Murielle Cohen, a Montreal native. Tiny Tiny is so small (3 feet wide by 13 feet deep) that you can’t walk inside. A display window gives passersby a 24/7 peek into the narrow lighted space filled with works of one local artist at a time. Every month, Cohen holds a block party at which she ceremoniously removes the newspaper from the window hiding the newest exhibition. Opening night is generally when sales are made; there are no posted prices.

“The point of this gallery is not about money. It’s a closed gallery, a gift to the neighborhood,” says Cohen. “People can just come by and look and not feel uncomfortable as they might when walking into a commercial gallery. I’m doing it to support art, and street art is definitely the new thing.”

In the small yard behind the apartment building that houses Tiny Tiny, Cohen gives street-art workshops for children and teens. They tour the neighborhood’s street art and then try it for themselves on white paper covering the walls of the outdoor space. On the front of the building and above its cornice, Cohen has installed 2D and 3D works by street artists including Adi Sened, Marian Boo and Imaginary Duck. Her own creations are found throughout Florentin.

Baltimore native Mitchell Blickman, now living in Tel Aviv, showcases and sells Cohen’s and several other artists’ work online at TelAvivStreetArt.com. He tells ISRAEL21c that he started out by documenting the city’s street art, and branched out from there.

You can even enjoy Israeli street art in your own home by purchasing street art-inspired clothing from Pilpeled or furniture fashioned from authentic Florentin street art by Street Capture.