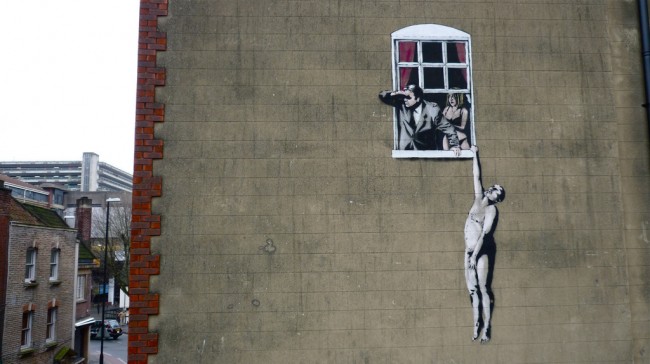 I won’t write an introduction to Banksy’s street art. You all know who Banksy is, at least as much as you don’t know who Banksy is. Unless you are from Bristol; in that case, I’m sure you have a Banksy story to share with street art bloggers like me, perhaps about the time you were hanging out together in Easton. I heard so many Banksy stories all over the summer and, although none of them helped me figure out the identity of the guy (and –honestly- I don’t even care about it), they all highlighted a fundamental point: whoever Banksy is, Bristol is incredibly proud of him.

Banksy murals in Bristol > “Take the money and run”, the early 1990s 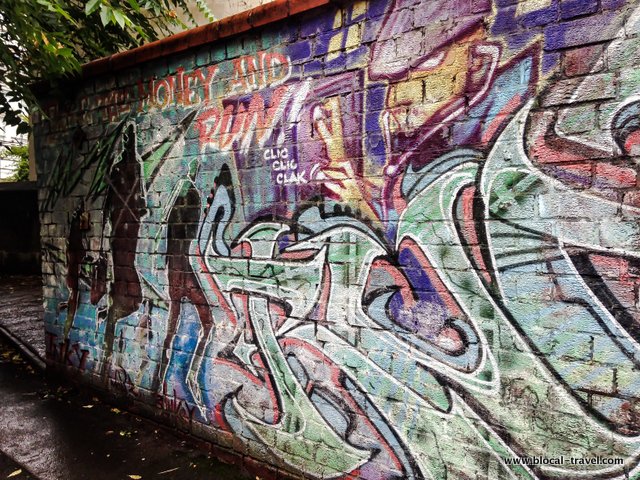 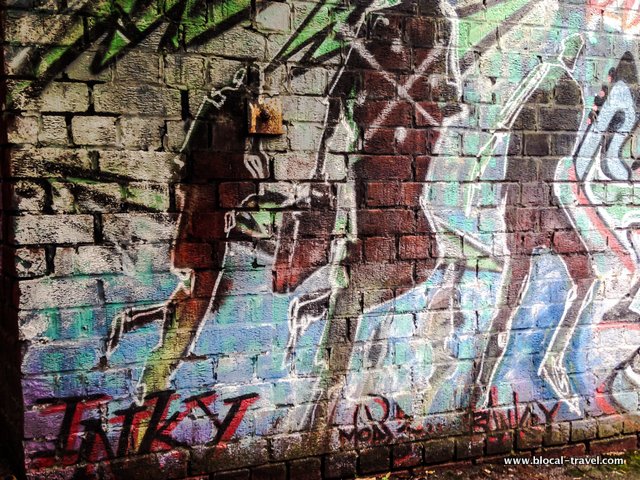 Painted together with Inkie and Mode2, this collaborative piece is one of the longest surviving early wall pieces by Banksy in Bristol. Back then, he was painting freehand rather than using the stencils and the influence of graffiti on his art was still strong, as we can see in the abstract mix of swirling colours and in the stylised lettering. 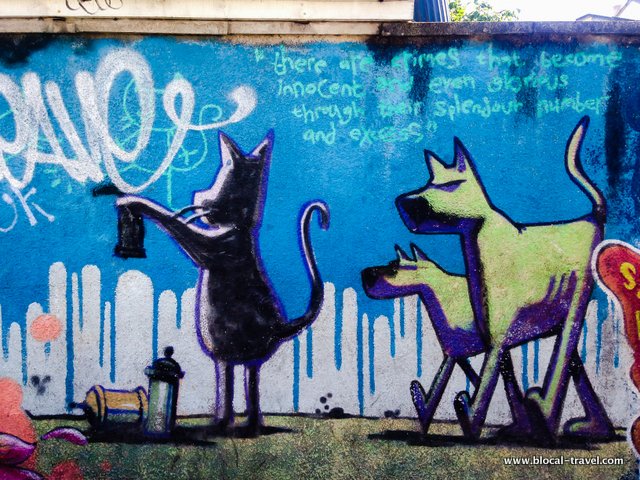 Another freehand wall by Banksy is in Easton, the neighbourhood where he supposedly lived and hanged out. This is a very early piece, painted when he was part of the DryBreadZ Crew (DBZ). It depicts a cat with a spray-can and two guard-dogs approaching menacingly. On the right side, we can read the highly self-referential quote “There are crimes that become innocent or even glorious through their splendour, number, and excess.” 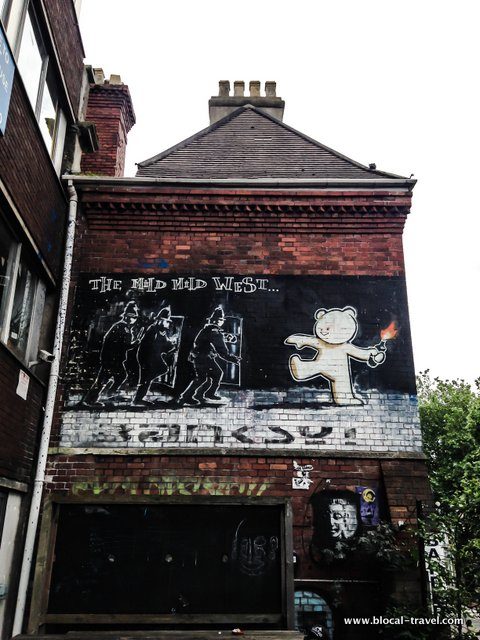 Bristolians love this old Banksy’s piece on Hamilton House, as it perfectly sums up their spirit: open and friendly like teddy bears, unless they are threatened and therefore must defend themselves with Molotov cocktails. The piece refers to a street riot that took place in Stokes Croft. Back then, Banksy created and sold a series of posters to raise money for those who got arrested during the riots. 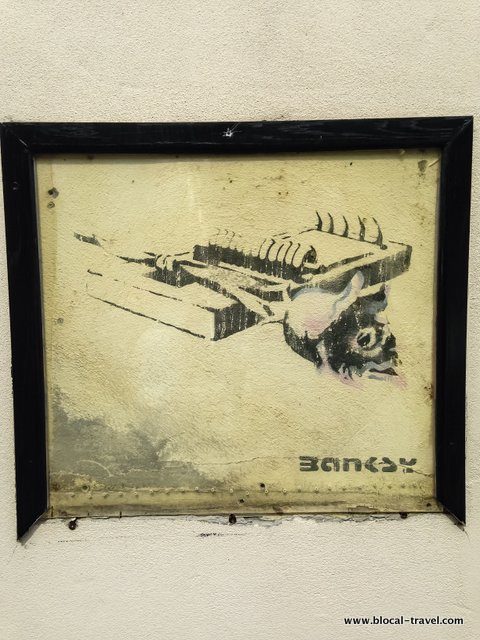 Although the practice is extremely common in London and other big cities, this is the only framed piece in Bristol, a town where even his earliest pieces –which date back to the 1990s- are still intact and respected (in awe, to boot!). But, in this case, the households loved this trapped rose so much than pushed themselves even further, by buying a glass and a frame to protect the artwork from tagging. As for me, I especially love it because I walked past it every day on my way to the city centre. 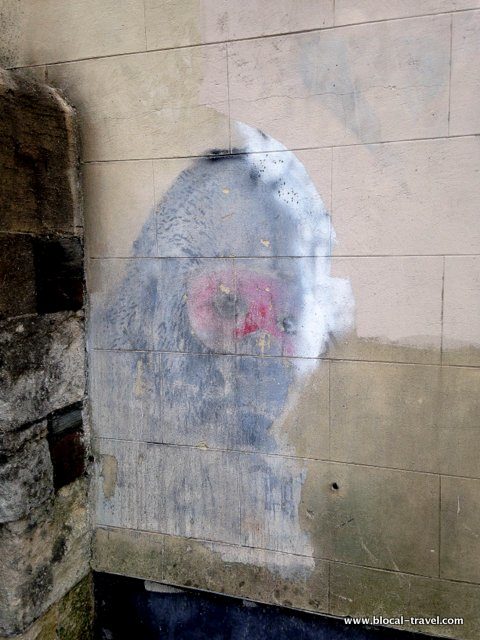 This black-and-white gorilla in a bright pink mask appeared on the wall of the Muslim cultural centre in Eastville, whose owner couldn’t recognise the value of a Banksy’s piece and painted over it in 2011. Although the effort of restoring it, the gorilla is now just slightly visible. 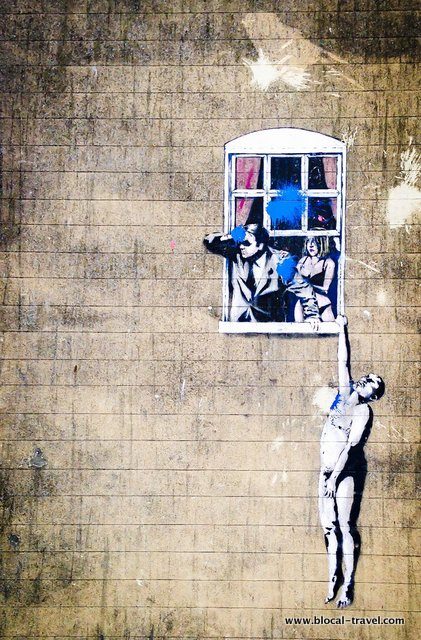 Banksy painted this provocatory piece depicting an adulterous couple on a building that used to be a sexual health clinic. When the council bought the building from the member of the band Massive Attack who had commissioned the piece, it surveyed the people of Bristol: 97% of them voted for keeping the mural in view. The piece is a dedication to the insolent attitude of Bristol. Unfortunately, it was damaged by paintball attacks, but –hey- that’s part of the game. 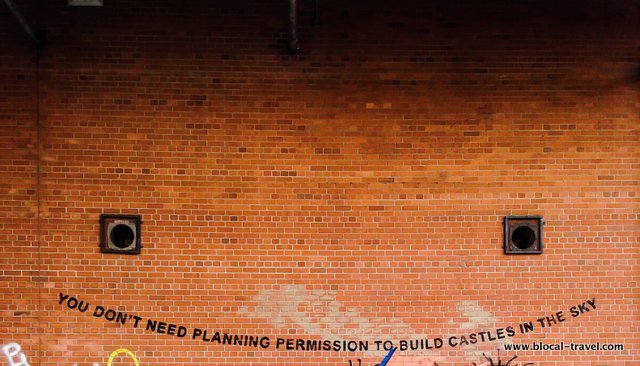 Tucked away in a parking lot in the city centre, there is the stencilled quote “You don’t need planning permission to build castles in the sky“. This 2,5-meter-long piece of textual street art is shaped like a smile, with two air vents where the eyes should be. This is my favourite Banksy’s piece in Bristol, to the point that I wanted to tattoo it on my back (and perhaps I will when I will be back). 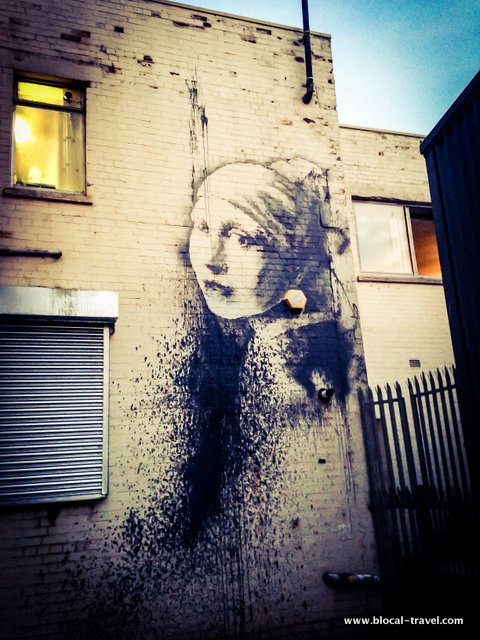 I especially love this piece, since it is the first one I spotted in Bristol. The mural is a satirical parody of Vermeer’s “Girl with a pearl earring”, and it uses the alarm box on the wall as the girl’s earring. This mural appeared right after the media had claimed the arrest (and the resulting identification) of the street artist. Even if some black paint was splattered over it less than 24 hours after its appearance, the piece is still gorgeous (actually, I think that the additional dripping paint adds a quirky charm to it). 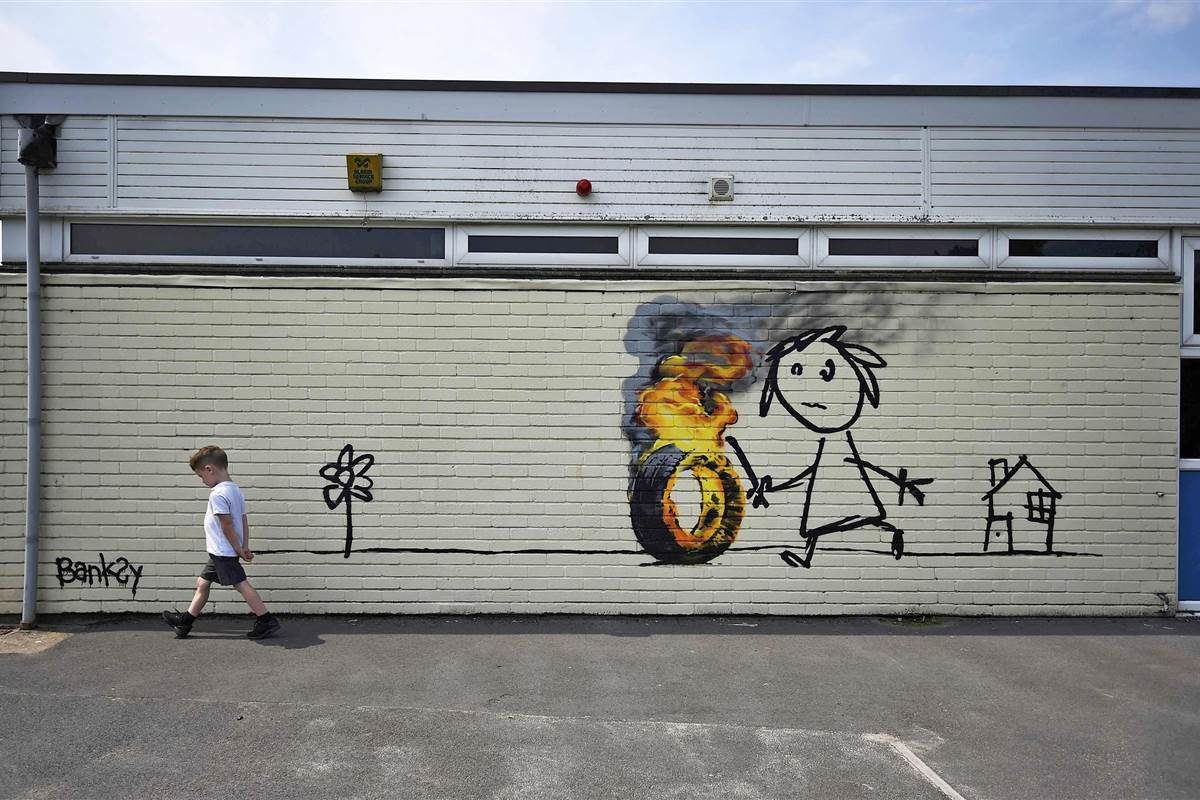 Picture from www.guesswot.com
Although Banksy is now the world’s most famous street artist, he still creates new works around his hometown. He painted this mural during my first week in Bristol: I rushed, overwhelmed with enthusiasm, to this school in the outskirts of the city, but the teachers didn’t allow me to enter. This adorable piece shows the sentimental side of the guy, who painted it to thank the children for naming a house after him. It depicts a sketched child with a stick chasing an hyper-realistic burning tire (a modern take on the Victorian game of hoop rolling). Banksy also left a thank-you note, in which he wrote to the children “it’s always easier to get forgiveness than permission“.