Its been a busy year so far for Italian street artist Fabio Petani who has created a number of big murals around Europe on several organised festivals. We look into a few of these:

The mural in the city of Salo in the South Finland is part of the Upeart Festival 2018, the international festival who guest some of the biggest artists from all the world. 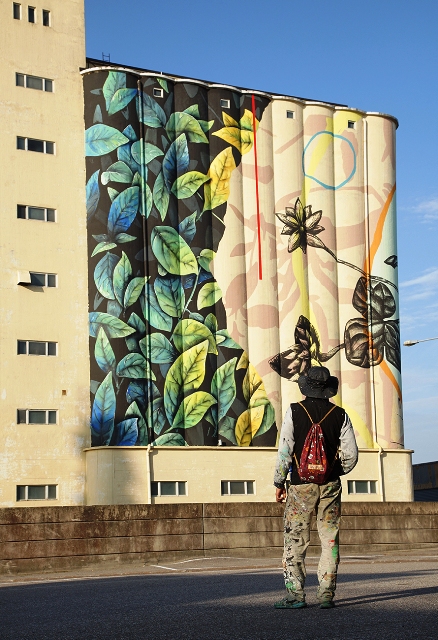 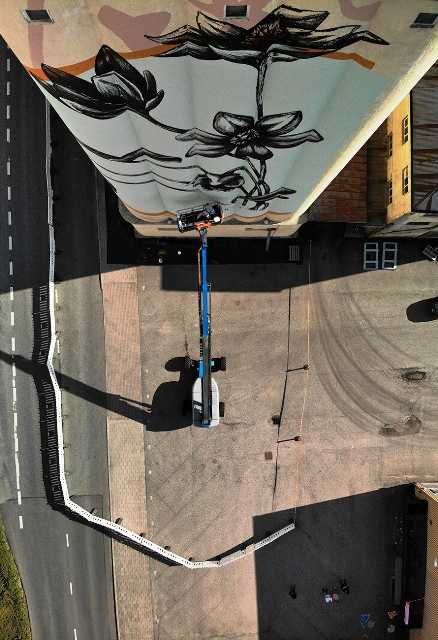 The mural, named METHANOL & ANEMONE CORONARIA, is 36mts high and it has a 2000 square meters surface.

METHANOL is commonly called wood alcohol like the Salo city is called city of wood. The plant represents is a nice flower typical from the Salo areas, in Finnish language called Sinivuokko. The composition, like an hug, cover three sides of the big silos, and is it close to the railway for the Turku – Helsinki trains. 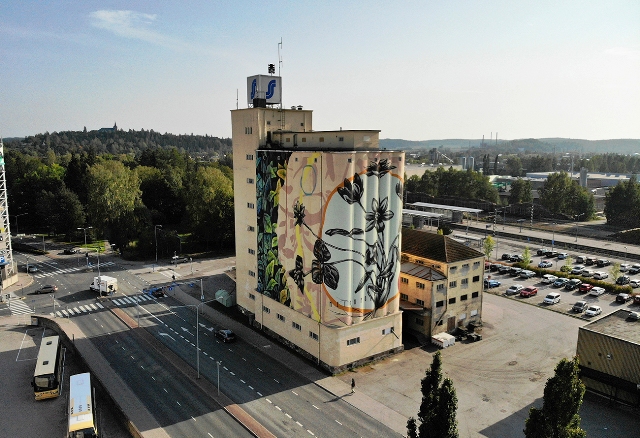 The project is part of the UpNorth Festival based in Bodø in the Northern Norway. The building is an old boat factory in Rognan and now is one of the most important concert hall in Norway, named Slipen Scene. 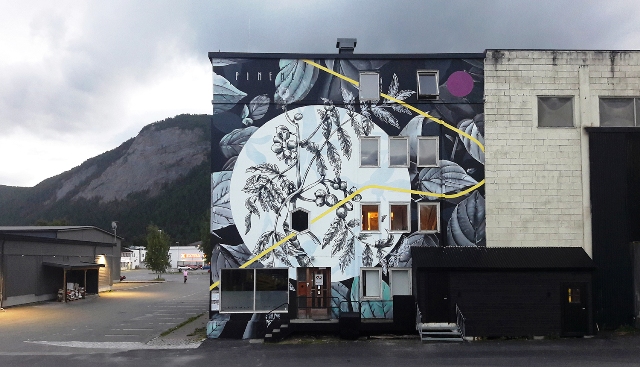 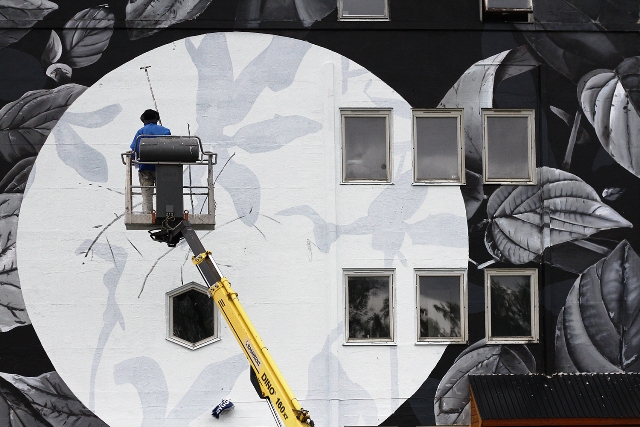 The work is principally painted in black and white with some light blue and turquoise shades on the leaves. The plant in the circle is named Sorbus Aucuparia (Rogn is the name of the plant in Norwegian)and Pinene is a chemical compost used to mix the colors and the resins for the boat, and it is from the pine plants. 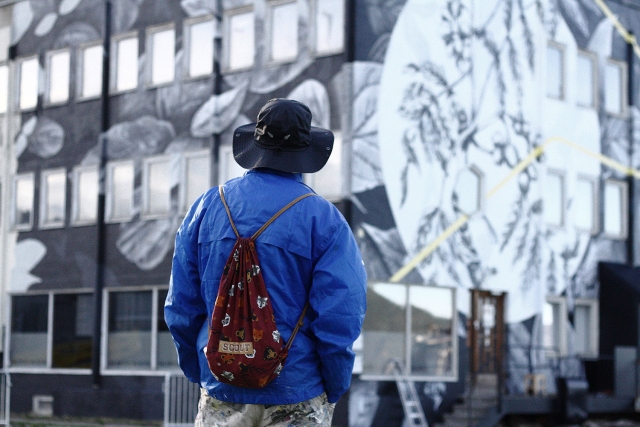 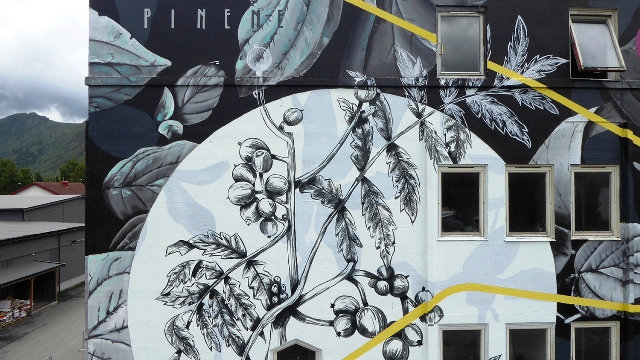 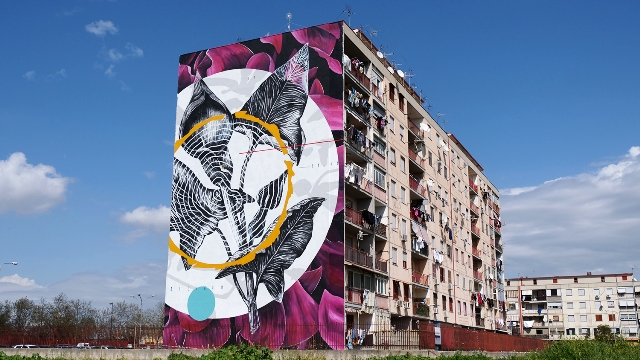 It is called “o sciore cchiù felice”, (the happiest flower in Italian) and that is also the name of a suggestive song by the Almamegretta ska/rap/dub/world/reggae group from Naples, Italy.
This work of art is dedicated to the worth and knowledge of the local areas and was inspired by the work of Mr. Aldo Merola, the botanist who was one of the most relevant directors of the Royal Botanical Garden in Naples.
And to Mr. Aldo Merola are dedicated the residential complex bearing his name, the long street bordering the Parco itself and the verdant municipal park sharing its dedication with the De Filippo brothers, the famous Neapolitan actors. 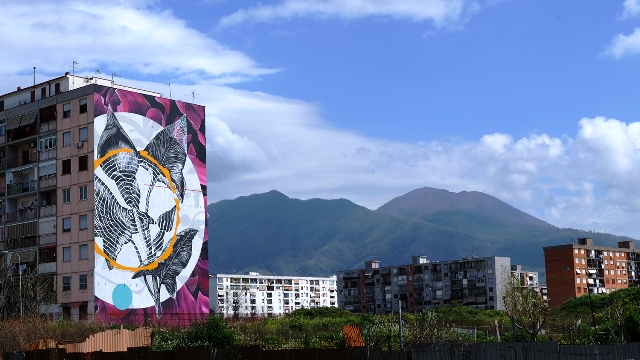 The new phase of this project saw the participation of children, kids and families from the Parco dei Murales, themselves involved in a guided tour of the Royal Botanical Garden in Naples and to its majestic Merola greenhouse in particular. This guided tour was a journey into knowledge for its participants, who discovered the history and the main features of rare and wonderful plants, as well as being able to draw everything they photographed (and that amazed them) during an artistic network afterwards. 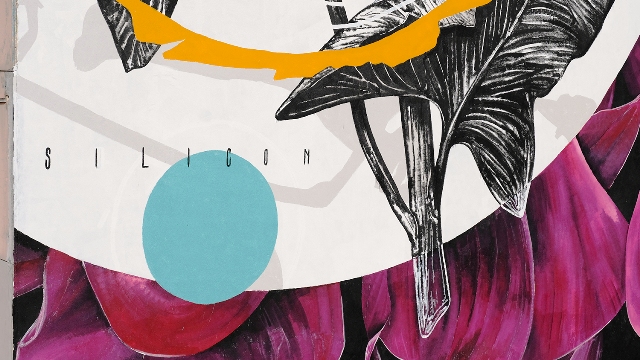 The artistic impressions created by the young participants were then sent to the artist, who took inspiration for using several colours, yellow and purple in particular, as these were the most photographed hues and for using the circle more than other forms, due to the appreciation the young visitors had for the corollas of the flowers they saw.

The creativity at work here involved first and foremost sharing and creativity and focuses on minors towards regenerating consciousness, identity and self-esteem within the local youth.
Therefore, the happiest flower is the one able to build its own ground to receive joy, benefit and nourishment.
The main protagonist of this huge work of art is a flower of Italian Arum (Arum Italicum), a Mediterranean species present in the local Vallone di San Gennaro, a valley dedicated to St. Januarius, the local patron saint. This plant has its flowering in March, the same month when the work of art was started.

The Italian Arum was considered a magical plant in ancient times and was reputed to have magical, averting powers, as well as being able to ward off evil spirits.
Because of this, it was put on cribs in order to protect newborn babies and it was also reputed to give love to those less lucky in amourous pursuits. This is the homage the artist made to the Parco, especially to its youngest inhabitants.

Students of local high schools are going to get inspired by the huge painted Italian Arum and the suggestions it gives in order to create the official logo for the Parco.