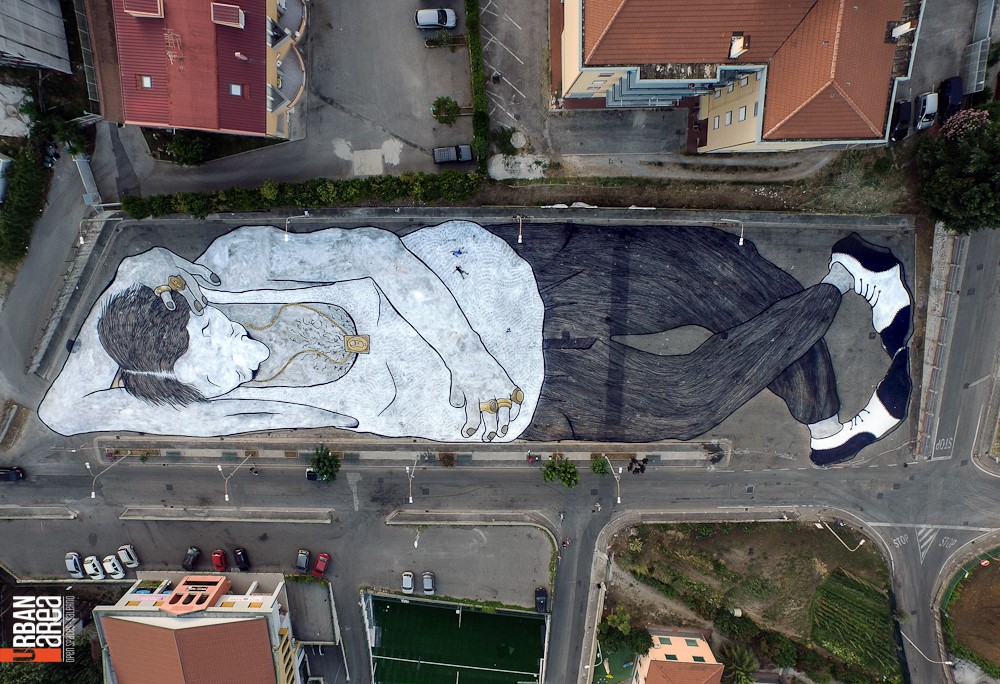 “Angeli della Strada” square, known to the inhabitants of Quadrivio di Campagna, in the province of Salerno, as “Market Square”, these days has undergone some radical changes that have transformed it from a simple expanse of asphalt and concrete, into a real work of art.
The French artists of St. Etienne “Ella & Pitr“, in fact, invited by the “a.DNA” for the project “URBAN AREA open spaces”, with their surgery have radically changed not only the aesthetics of the square, but Also the idea that in the square there could be more than the market of the Monday. And the rest of the week? Parking, often vandalized at the expense of residents forced to hear loud noises at night and not be able to use the space of the square during the day, not even to let the kids that aren’t free to play.

Now a giant resting on a square of about 3600 square meters, 120m long and 30m wide, nicknamed “Eros”, shows us “How to stop sucking your fingers” and start to really change something, activating and not remaining passive. Change not only aesthetically or superficially, but engage in making the place we are suited to our needs, without delegating others to do so, without waiting for someone else to solve the problems: waking up and getting out of torpor is a duty of every citizen. Recover and “live” really their neighborhood and their city is a start of no small importance. 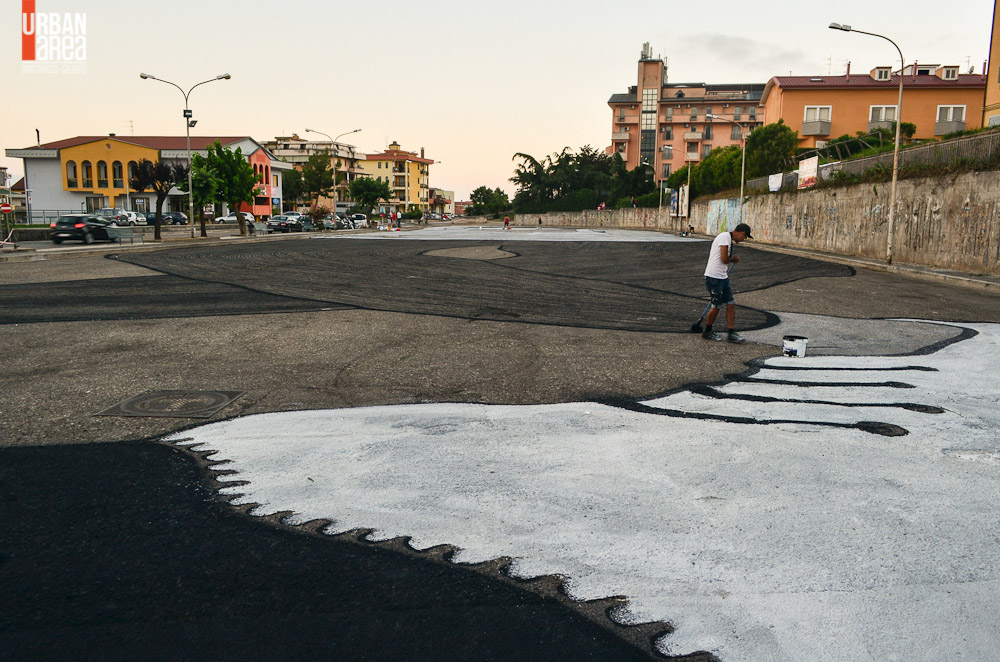 Thanks to a strong push of the local administration who wanted to recover a non-place so closed and impossible to live for most people, the association a.DNA has got to offer and invite the two artists Ella & Pitr, which for some years working directly on the horizontal surface of the roofs of buildings and entire streets, transforming anonymous stretches of asphalt, recline figures of giants or animals sleeping in different cities of the world: from Chile to Canada, from France to Germany. 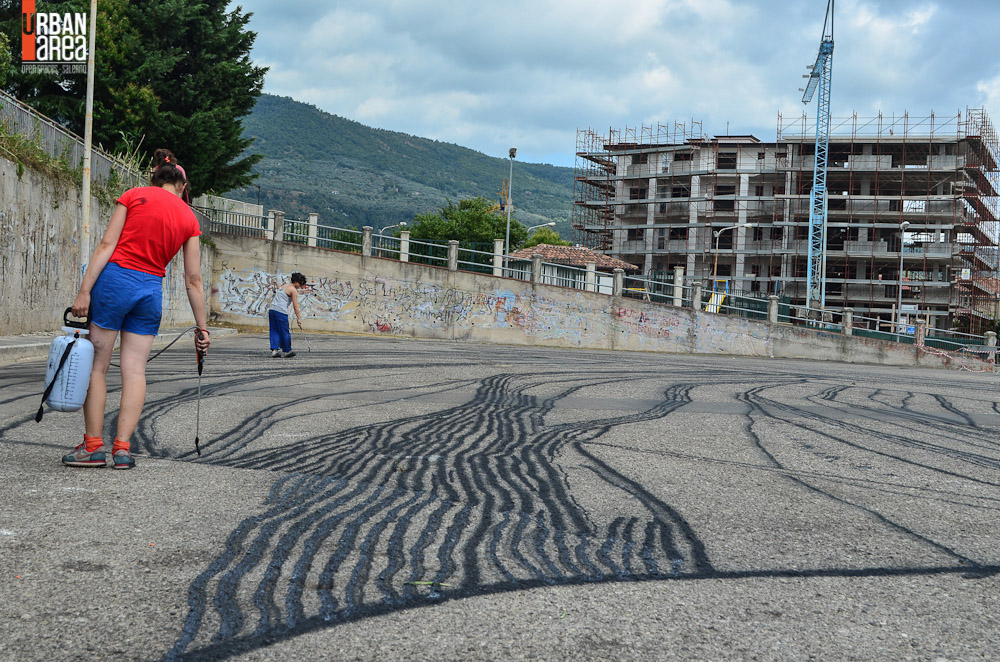 The two artists from St. Etienne, Loire region in South-Central France, were called to paint in a very delicate being area, in fact, a place of passage, a “square” of private of the typical functions of agorà. From July 27, the day when it was banned the transit of cars and artists began to paint the lines of the design previously prepared, thought on the spot and then drawn on paper, began almost a chemical reaction, which can only road rampage: the curious passers-by car and no, stopped, interacted with the artists and employees of the association, have tried to understand what they was working, the children from the highest points around the square and began to exclaim understanding what was about to take shape embedded in the architecture of the entire surface of “Market Square”. Anyone who has experienced this first-hand experience can witness the magic that is created in a neighborhood such as the Quadrivio, which unlike the old town of Campagna, suffers from a lack of cultural constant, but that proved to be responsive and “active” at a time in which the dispersion has been transformed into aggregation and participation. 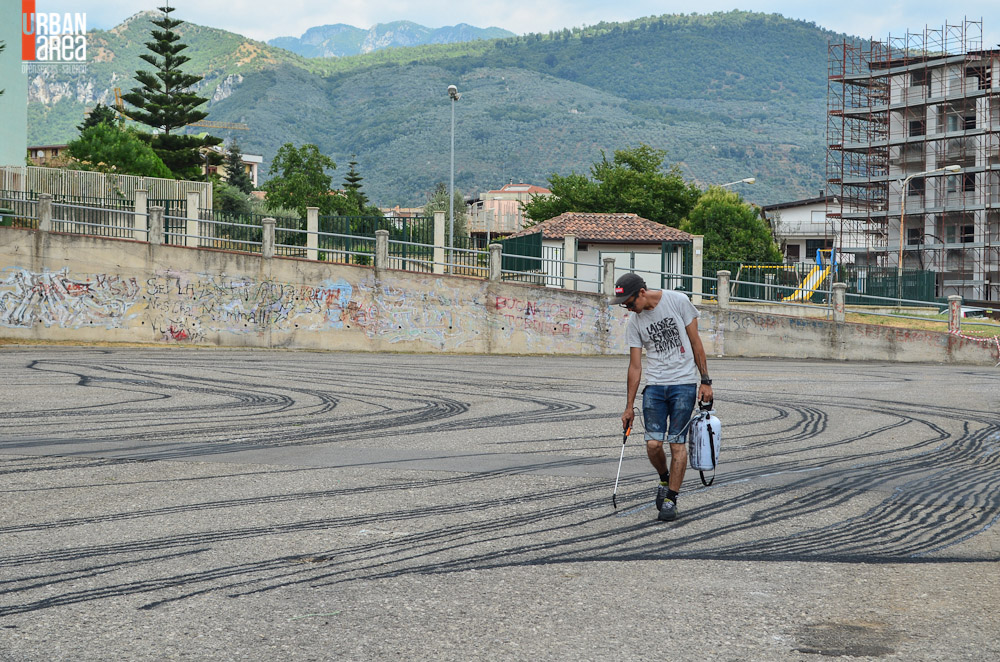 Participation already materialized during the organization with the help and the presence of several partners in the territory as Colors & Colors with Sigma Coatings for materials, Alfapack and Plasticart or the Island Cafè and the Brigante for hospitality, for which even some people of Campagna have offered their homes. Artists have got to live in close contact with the citizens of the place and purpose of the project “URBAN AREA open spaces” has been achieved, in this case, thanks to the spontaneously interactions and the synergy developed between local government, association a.DNA , citizens and guest artists, in search of the same goal. Now, in fact, the square “Angeli della Strada” of Quadrivio di Campagna, has been permanently closed to vehicles transit and during August 1st, we came together with families and has asked the children to draw what they would like to be realized in these spaces. A beginning for the creation of a new gathering place, to show that with artistic interventions of this type often, if properly contextualized, they can also achieve concrete objectives, beyond an only aesthetics “revision” of the city. 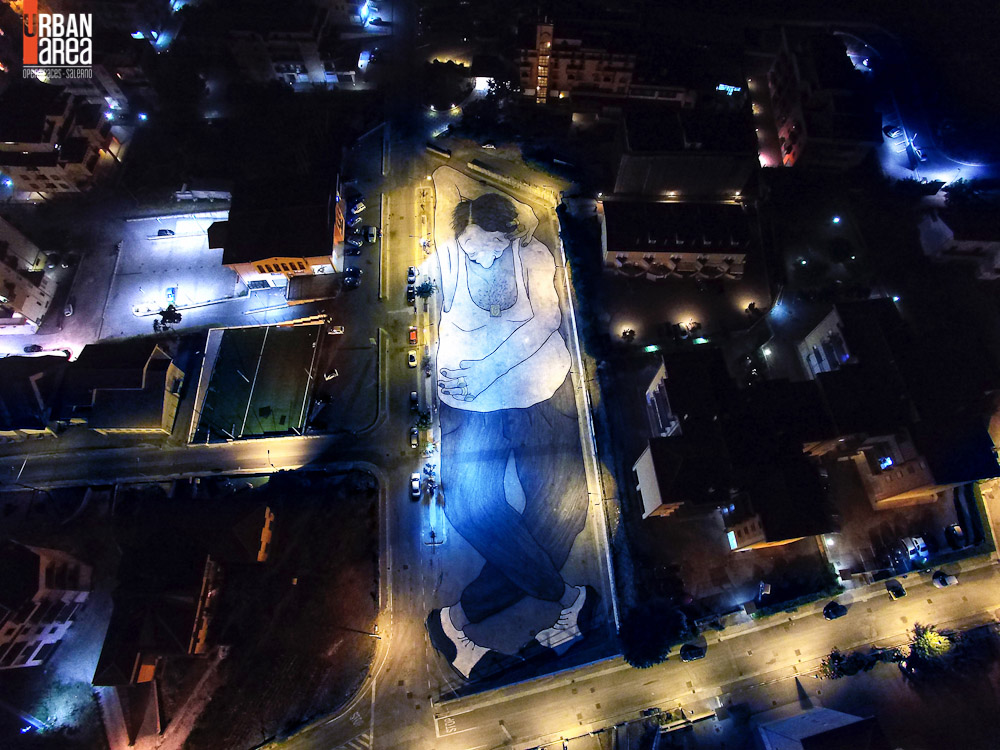 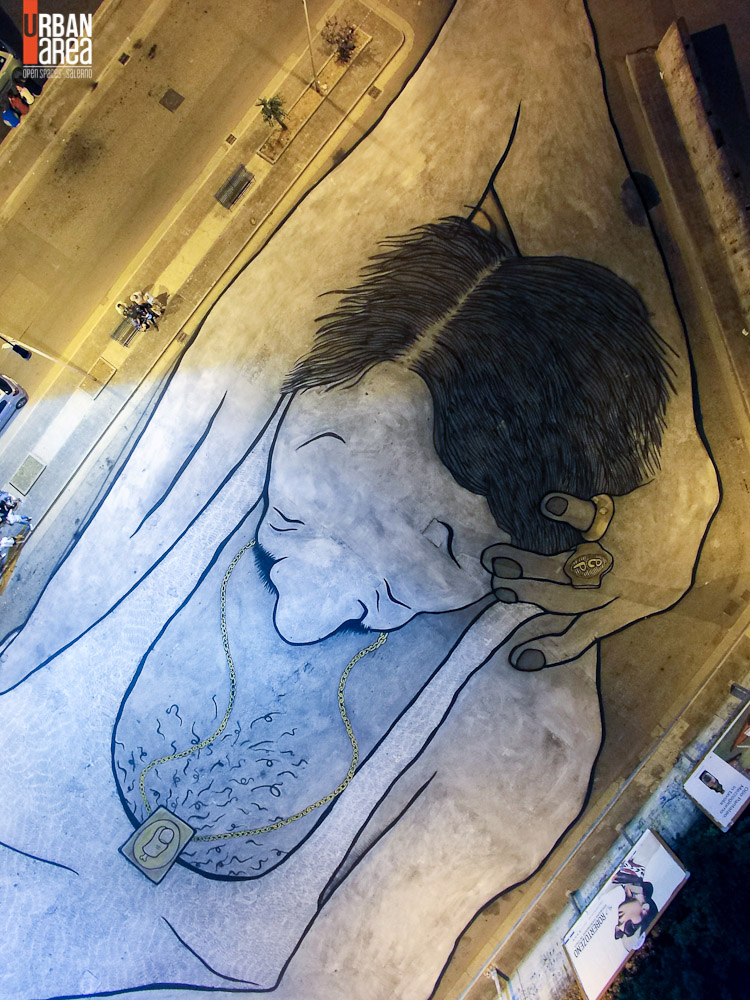 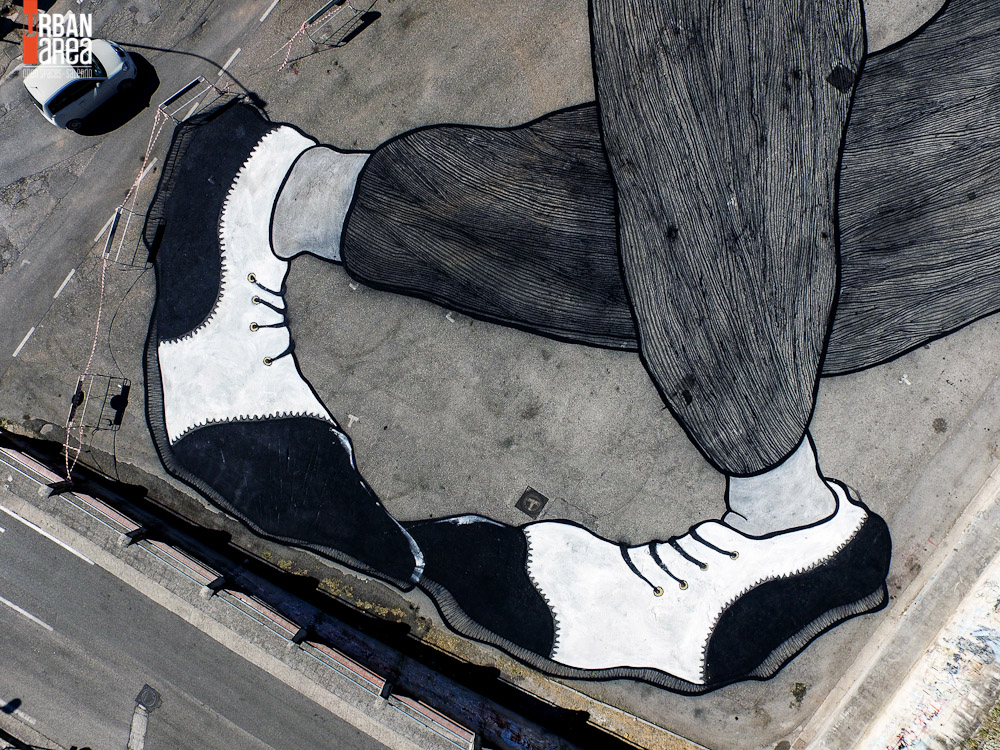 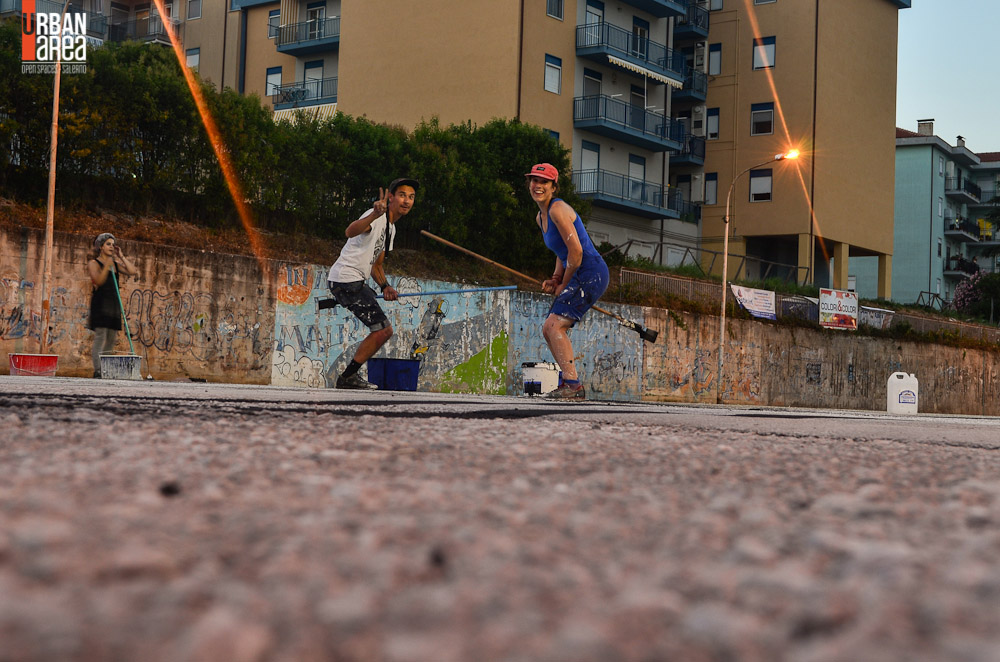 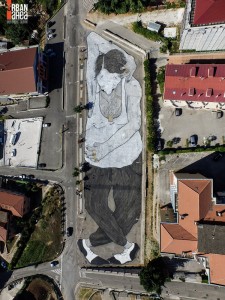 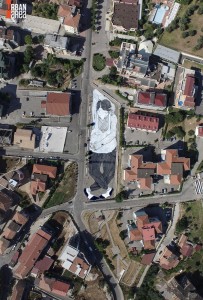 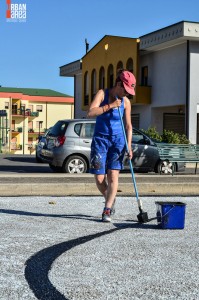 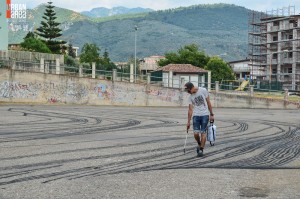 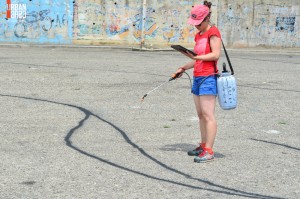