About 20 years ago, Dr. D got bored with his fly-posting day job and started creating public interventions, primarily for entertainment. Here we see his latest big scale intervention taking place in Aberdeen for one of europe’s most promising festivals – NUART Aberdeen 2108

The Doctor’s long and consistent legacy recently scored him an invite to Nuart Aberdeen, where he didn’t miss an opportunity to place his work at the controversial Trump golf course, along with plenty of other small jabs throughout the Granite City. 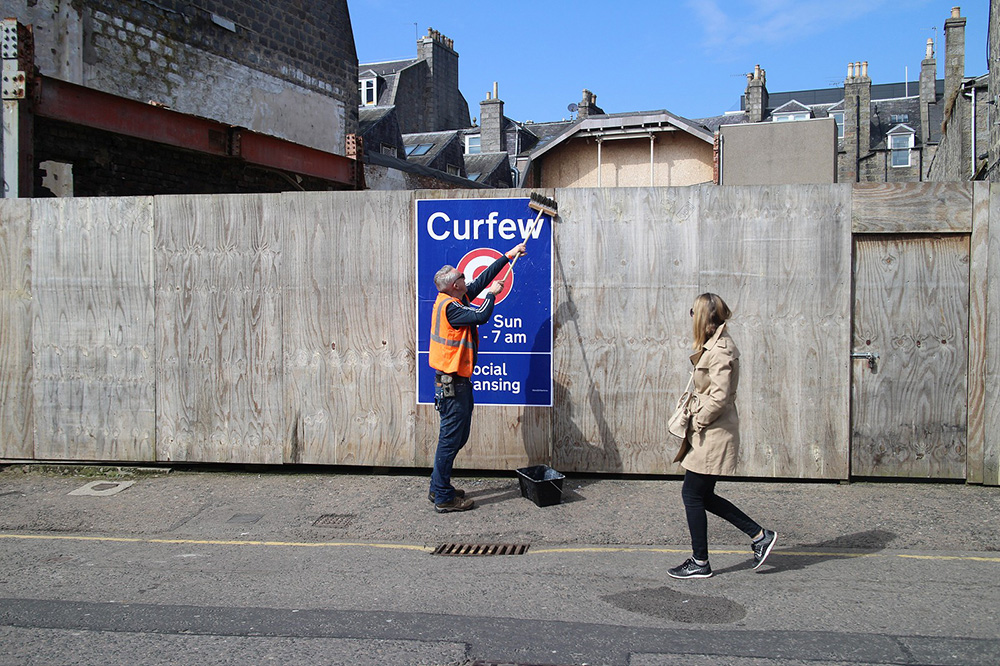 On his first appearance in a street art festival line-up, and on a rare occasion to place his work outside of London, Dr. D introduced a series of works, new and old, installed throughout Aberdeen and Aberdeenshire. With some of the pieces directly focused on their site-specific location, such as small oil barrels labeled “Art is the new oil” or signs labeled “No bald games”, his series of interventions address the current social, economic and political climate in his homeland. From commenting on issues with social housing, the normalization of food banks and the Brexit situation, to pasting up fake public service announcements that declare curfew hours for “social cleansing” and ‘alternative’ newspaper headlines, his work will confuse and amuse locals for days and months to come. 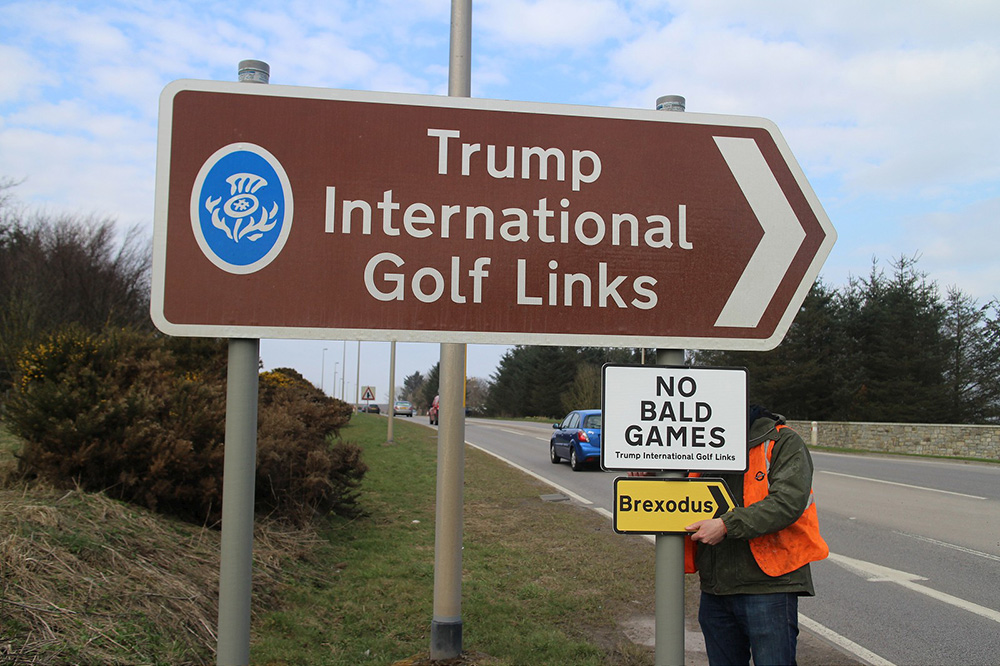 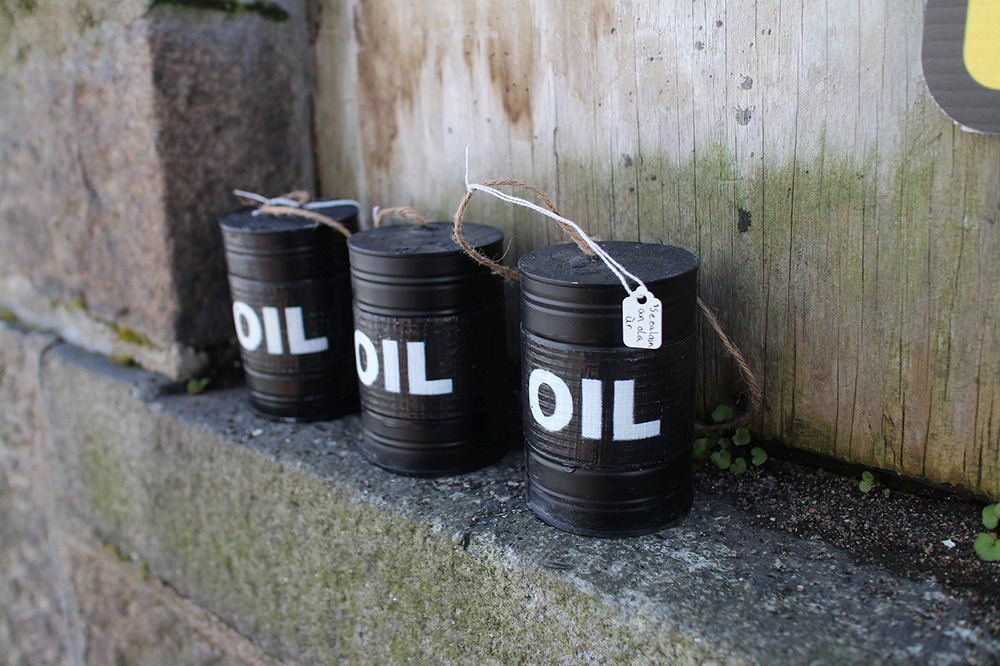 The highlight of his visit to Scotland, however, was the diversion he did at Trump’s golf course only few miles outside the city. The controversial course that led the POTUS to a head-on clash with environmentalists and locals was the perfect setting for Dr. D’s misleading signage. Showing how the Brexit campaign shares the same ideology as Trump’s politics, the London-based “subvertiser” made a pretty clear statement about the current UK and US political situation. On a lighter note, he placed one of Bortusk Leer’s colorful monsters carrying a placard stating “Don’t be a Trump” right under the official Trump golf course sign. He also installed two “No bald games” signs, poking fun at the US president’s infamous hairstyle. Interestingly enough, Aberdeen used to be the place with the most “No ball games” signs back in the day but was also the first city in Scotland to ban them. Sadly, the golf course security spotted the new additions almost instantly and had them removed by the time we drove away. Luckily, we got these photos to put smile on our face every time we hear about Trump and his favorite sport. 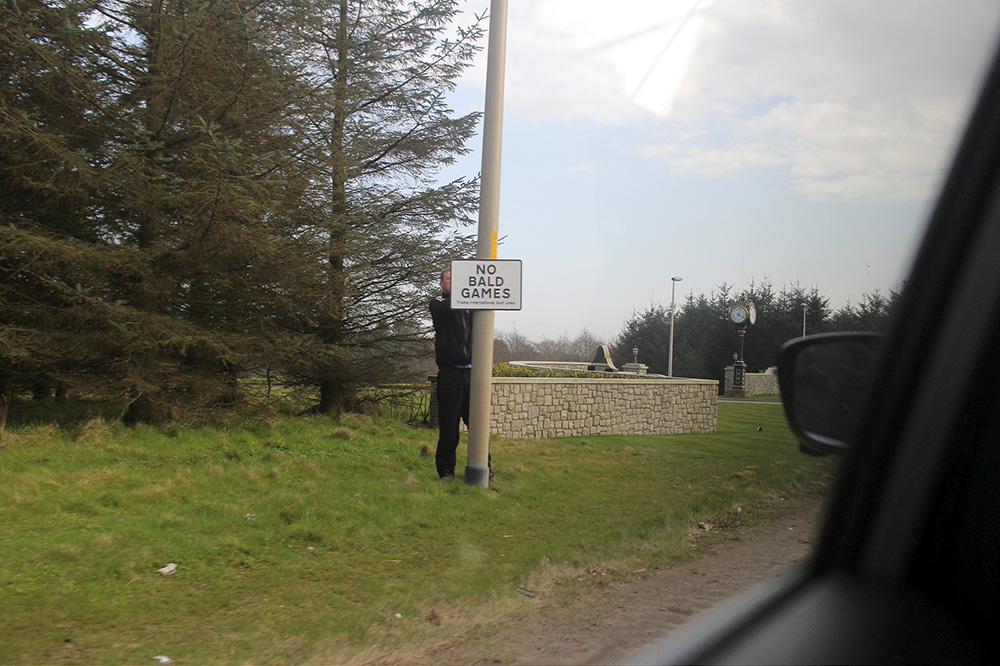 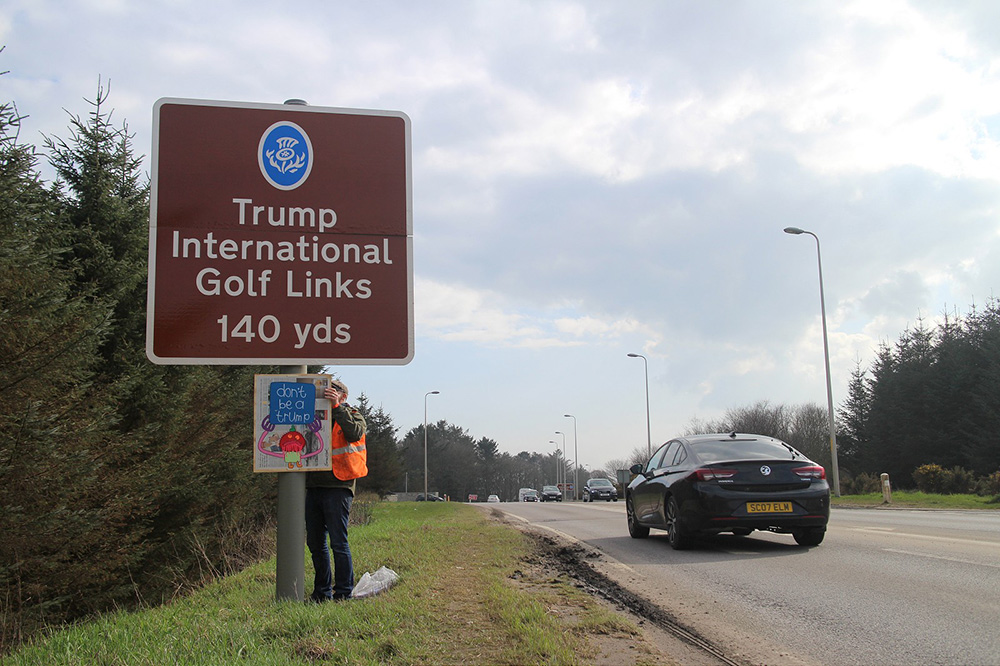 Dr. D is a London-based artist and ‘subvertiser’. Using a cut and paste technique to ‘doctor’ everything from big brand billboards to political posters, Dr. D mimics the scale and visibility of advertising to raise awareness about who has the power and authority to communicate messages and create meaning in our urban environment.

The act of subverting advertisements (or ‘subvertising’) has long been utilised as a tool for social commentary and protest within the field of street art. Dr. D’s wry and insightful observations often appear in response to current affairs and social debate, providing a subversive take on mainstream news and media. 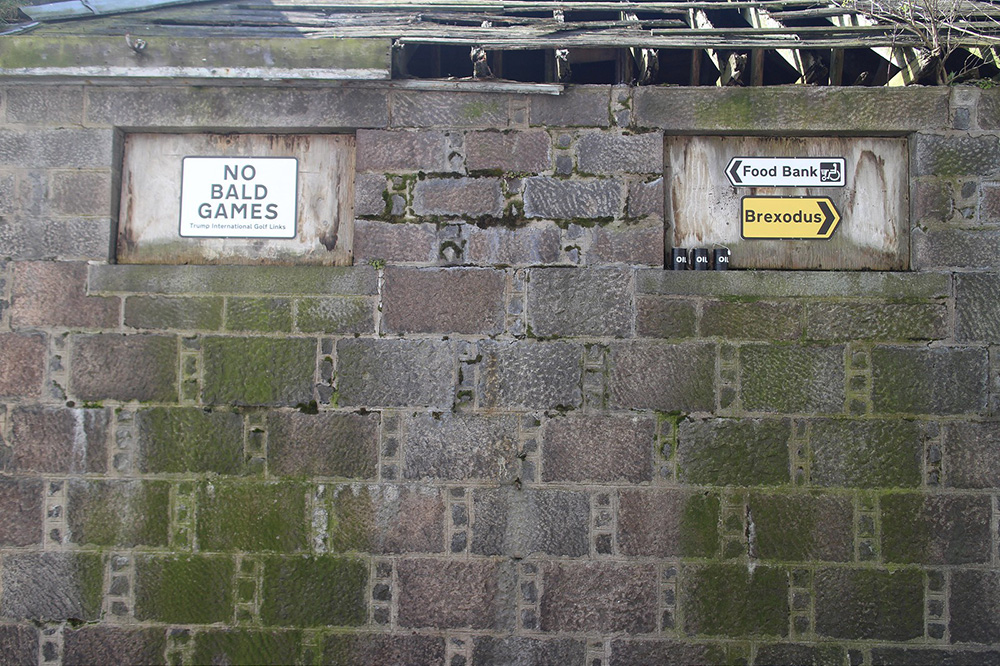 By incorporating the same aesthetic, logos and fonts of the original material, Dr. D’s interventions are embedded within the physical landscape and can be easy to miss at first glance; emphasizing the insidious nature of outdoor advertising and its cooption of in public space.

Nuart Aberdeen, a new international platform, is designed to not only present the most interesting and relevant Street Art of its time, but to also activate and inspire an emergent local scene whilst encouraging creative collaborations with twin city Stavanger.

Brought to you by the team behind Stavanger’s internationally renowned Nuart Festival, the award-winning festival returned to the Granite City for its second year this April.

Developed in collaboration with Aberdeen Inspired and Aberdeen City Council, Nuart Aberdeen provides a platform for local, national and international artists to showcase their work through a series of site-specific murals, installations, interventions, and temporary exhibitions.