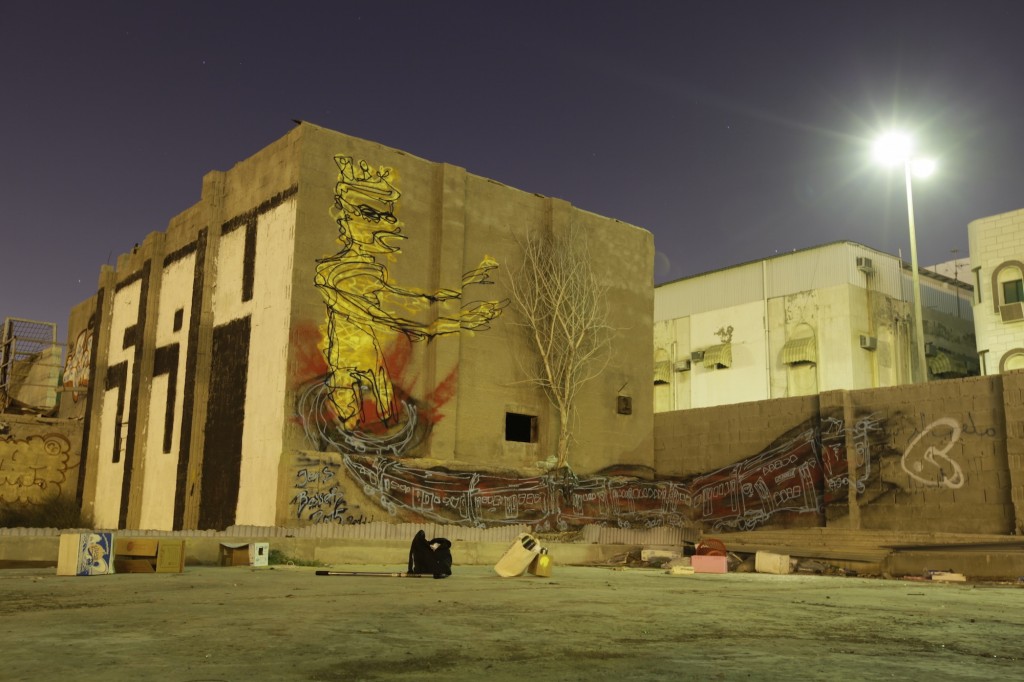 Saudia Arabia is not the typical travel destination of street artists. When i was invited by Goethe Institut Kairo to Saudi Arabia I thought about my decision twice. In German media Saudi-Arabia is famous for inhuman legal practice, cutting hands off because of stealing or supporting terrorist activities of islamists. But instead of being afraid i thought about the unique opportunity to get an inside view of Saudi Arabia and of Saudi Art and Street Art scene. I thought about supporting local artists and activists. Supporting the local artists and activists means to me criticizing the illegal punishment of Badawi, too.

Originally it was planned to be part of Janadriyah Festival near Riadh. When King Abdullah ibn Abd al-Aziz died in January the Festival was canceled. But I already got my visa. The organizer of the project decided not to cancel my visit to Saudi-Arabia, but instead of Riadh I flew to Jeddah. In Jeddah i gave two workshops and realized some street pieces. To get offical permission for public art, needs a long time and a lot of talks, that’s why i decided to do some unauthorized pieces in Jeddah. The first work I did was a street piece visible from a motorway which leads into Jeddah. Some local graffiti writers and me went to this place in the night – It was perfect temperature for painting and the space was perfect for painting a bigger piece.

The result is called „King of trains.jpg“. The piece is 4-5 meters high, around 10 meters wide, done with stick and spray. It shows a former King from Saudi-Arabia. HE let build a train line used for public transport between Riad and the northern coast of Saudi Arabia which is still in use. You can imagine how angry the oil companies went out when they heard about these plans. A train in the country of oil&cars ? But take care – it’s only a tribute to the trainline in the City of missing public transport called Jeddah.

My second work was inside a sculpture. „The accident“ is a sculpture at corniche road along the coastside of Jeddah. „The accident“ by Julio La Fuente is part of a public art program, or better urban beautification program,  in Jeddah done in the 70s. Jeddah claims to be the biggest urban art museum in the world. You can find on all roundabounds another strange sculpture – a huge carpet with car on top, a big tap , big cisterns or a huge fist. This city is full of big weird sculptures. And Everybody knows The „Car-Kaba“ – better know as „ the accident“. It’s extremly visible and in a city without public transport – cars are a special theme. 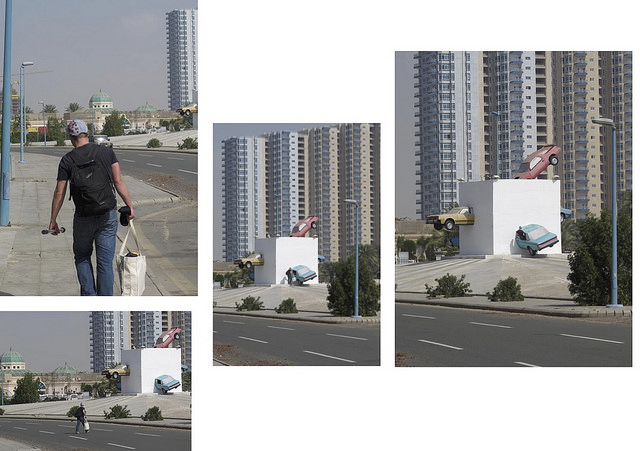 When we first passed by this sculpture i told the driver to stop. This work had such a strange and strong impact on me, that a needed to look closer. I realized that it was possible to enter inside. I climbed through the broken car window and discovered a hidden place – perfect for drawing and right in the central public view. I found a lot of waste inside. It reminded me on a typical abandoned factory where you could find needls or beer bottles . I discovered writings from 2000. I decided to do an drawing piece inside.

The next day i went for working inside. A friend of mine was checking outside, if police comes, or something else happens. During my drawing session outside a lot cars, even police and some workers passed by. The workers cleaned the streets around the sculpture. But nobody discovered me during my daytime work inside. 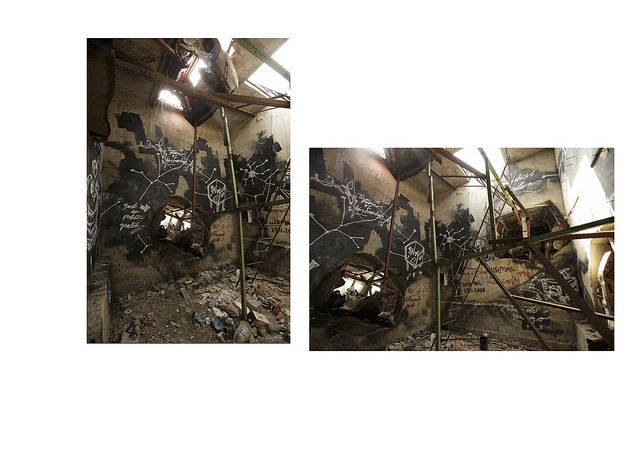 Being inside i remembered some drawing sessions in abandoned places in Dresden and Milan. I thought about a work i did in end of 2013 which was called „Welcome 2 Utopia“. These hidden places are full of Freedom and Anarchy – utopian places. This is where i started my drawing. First i primed the wall at some spaces in black, later i continued drawing over the black spots with spontanous ideas. I did a drawing of the sculpture, another one of the real Kaba , some coffeemaker – these works dealed with circles. Then – Because of being thirsty i drew a bottle of water. I continued a house, Birds flyig outside the sculpture. I added some connections, a hidden room and comments. A sign „back to public reality”.  Finally i called the work „Entrance to Utopia“. 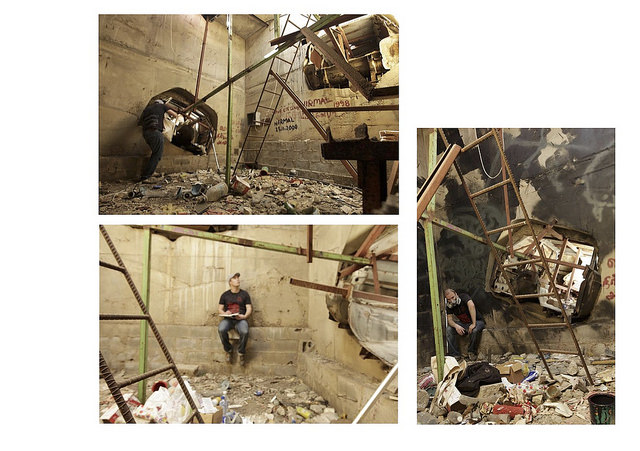 After leaving the sculpture i went straight to the car where the driver waited outside – for 2 hours in heavy sunlight. Just thirty minutes later we passed by again. Local artists and me did a tour through Jeddah about art and Street Art in Jeddah. They where extremly amazed about my story and the idea of the work inside the sculpture. 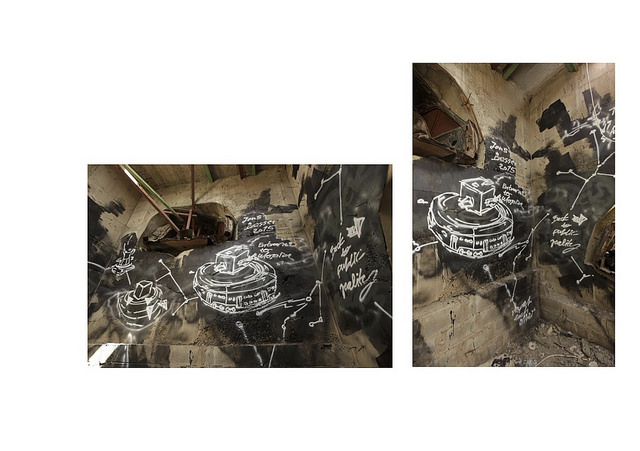 In general you do not find a lot street art in Jeddah – strongly visible or political pieces are buffed quick and it’s difficult to work illegally in the streets. In thenight corniche road is full of police cars. The writer scene in Jeddah is young. Some of writer focus a on commercial works. A few writers do street bombing, but it’s difficult to find places to paint. That’s why it’s something special that an art piece opened space for a new unexpected piece inside.