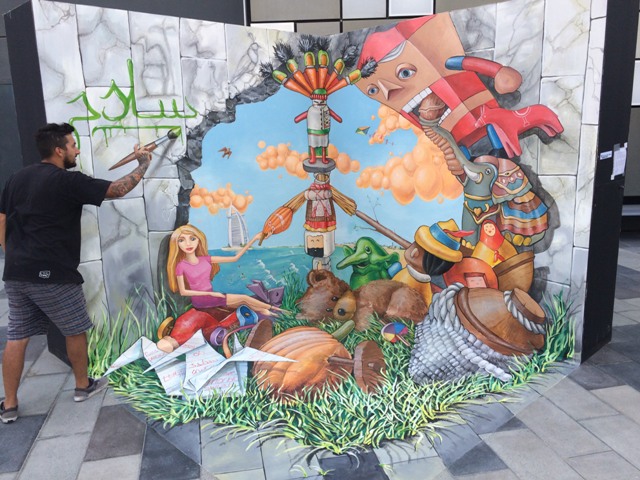 Long-awaited 3D Art Festival Dubai Canvas 2017 is starting today at City Walk. During the week 25 artists from different countries were preparing their works for the festival. Finally, all works are ready. Street artist Dima FATUM, representing Ukraine, made the final touches of his painting “International peace is absolute happiness”. Dima’s work is an optical illusion that encodes the global symbol of “Peace”. The basic idea of the picture is an image of absolute happiness that should prevail in our world where people live in peace and harmony. According to Dmitry, children do not fight with each other, do not divide other people under any parameters, including national identity, so he decided to visualize the absolute happiness this way. The painting is very symbolic for the UAE. After all, the country is known for its policy of tolerance, and Dubai is the most international city in the world. 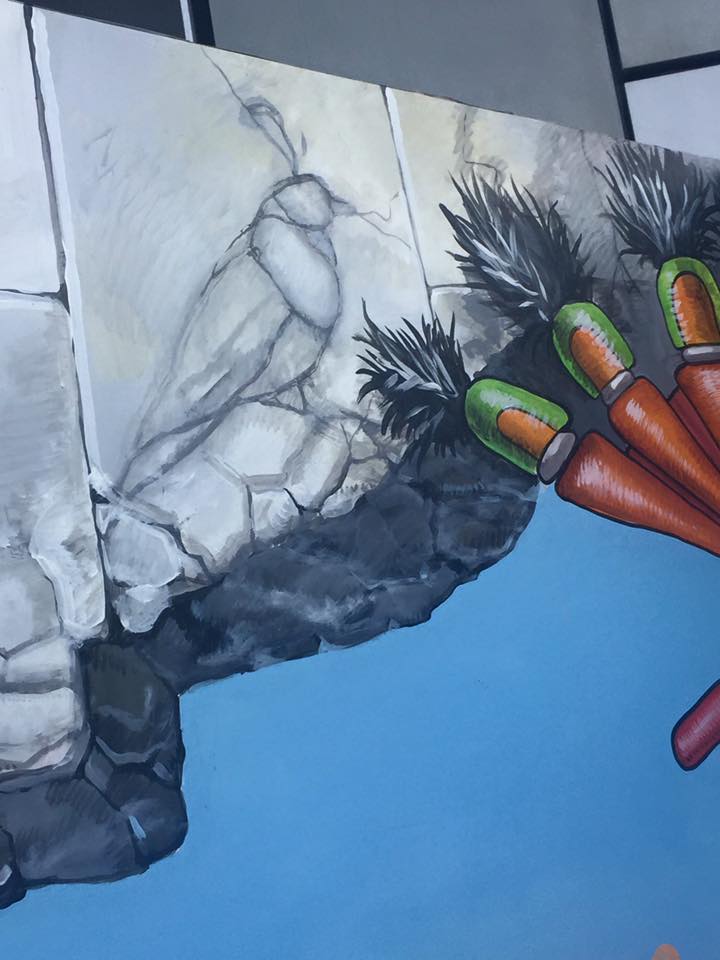 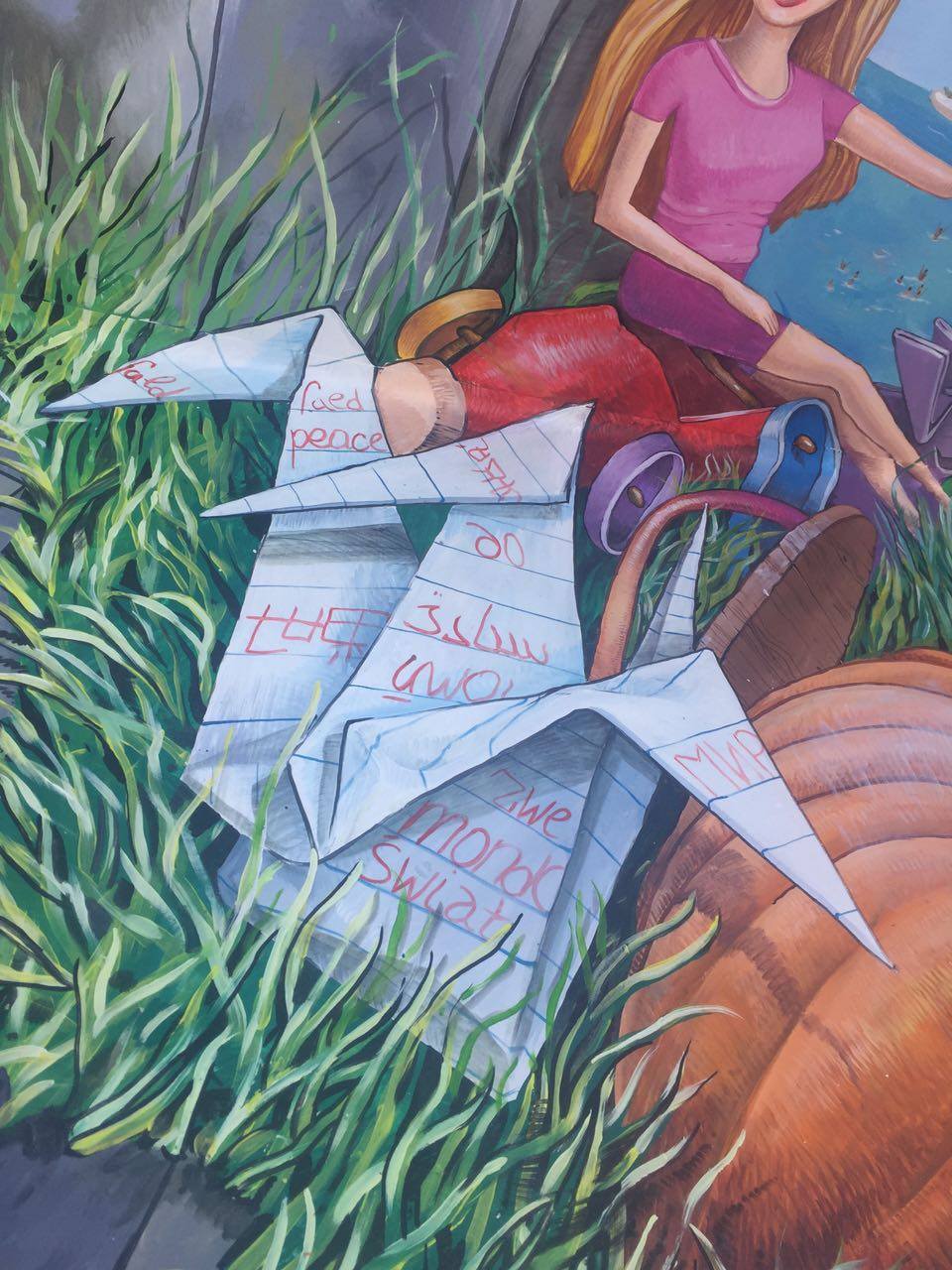 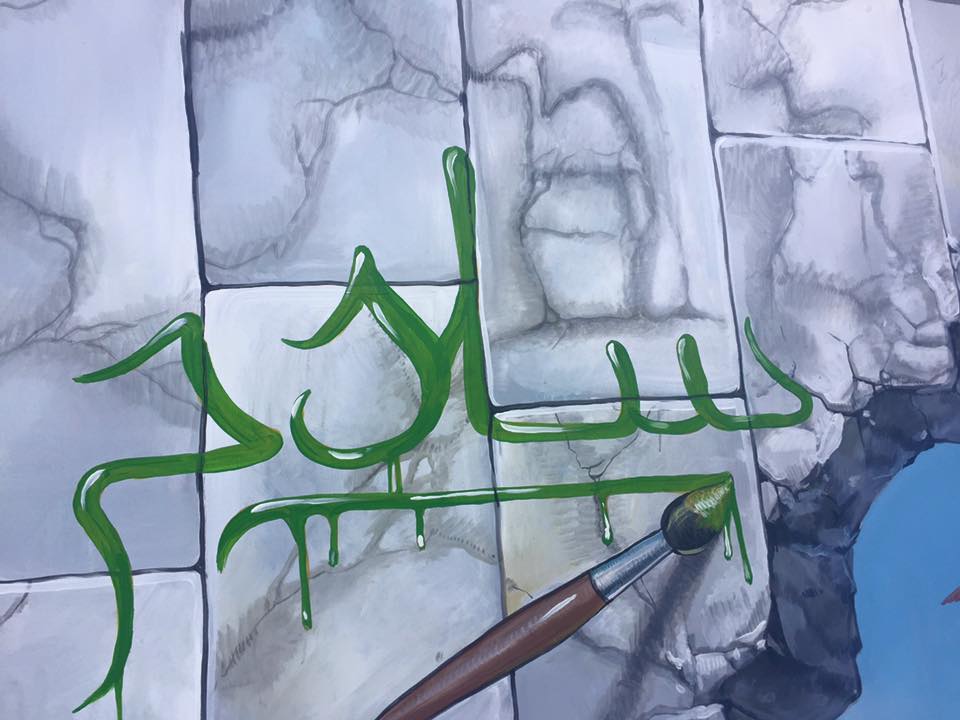 The painting, in the form of veins of marble, depicts national symbols of the #UAE – soaring falcon, Burj Al Arab hotel, scorpion and camel. Children’s toys represent different countries – a Teddy bear from England, Barbie doll from America, elephant from India, motantka doll from Ukraine, kokeshi dolls from Japan, etc. It also shows the Japanese symbol of happiness – origami crane with the word “happiness” in different languages.
As the author explains, in this artwork the viewer will see not only expression of Happiness and Peace, but also can find associations that will take them back to their carefree childhood. 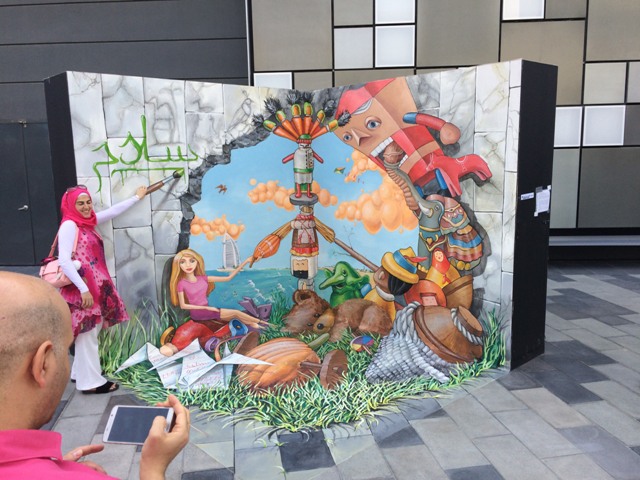 According to the artist’s description here are his words on the artwork presented in Dubai.

”My artwork is an optical illusion encoding the global symbol of “Peace”. It comprises children’s toys from around the world. The key idea is absolute happiness that will be granted to our planet, when all peoples will live in peace and harmony forgetting about wars for lands and minds.

To visualize absolute happiness I opted for its most basic category – children’s happiness – as it does not vary from country to country. Kids do not have the idea of fighting against each other. They do not divide people into the rich and the poor, the beautiful and the ugly, the white and the coloured. They do not see differences in the national identity of each other. In this respect, Dubai implements this idea in full: first, it is the most international city in the world (according to 2016 ratings), second, it prioritizes human happiness.

Regarding the visualization, the work features the UAE national symbols: a soaring falcon, Burj Al Arab Hotel, as well as a scorpion and a camel, encoded in the marble wall veins. The children’s toys represent different national symbols, i.e. an English Teddy bear, an American Barbie doll, an Indian elephant, a Russian Matryoshka nesting doll, a Ukrainian Motanka doll, a Swedish Dalecarlian horse, a Japanese Kokeshi, a Norwegian troll, a Native American kachina, a German Nutcracker, an Italian Pinocchio, a Mexican painted pumpkin, and, naturally, a wooden Arabic nesting doll. The ancient Trompo or whipping top toys are so well known in various cultures that it is hard to locate their place of origin. Handmade toys that were made of plastic bottles and pumpkin stand for developing world children’s ability to play and be happy despite poverty.

The foreground shows the Japanese symbol of happiness, an origami tsuru crane, with the sign of “happiness” in different languages.
Thus, each viewer can see not only a clear message of Peace and Happiness, but also find numerous meanings and associations for themselves, going back to their carefree childhood and feeling unlimited tranquility and easiness again. ”