Street art, architecture and…horticulture combine in a new project that aims to challenge the predominance of large-scale muralism.

Five international artists who specialize in producing site-specific and ephemeral outdoor artworks were recently invited to Oslo to participate in a new initiative for independent public artists – the first of its kind in the city.

Devised and curated by Desire Lines – a new platform that aims to broaden the diversity of expression in public space in Oslo – the semi-structured residency took its inspiration from the Oslo Architecture Triennale (which took place during the same period) to explore ´degrowth´ from a street art perspective, in particular how human-scale, intervention-based street art can offer an alternative to large-scale muralism. 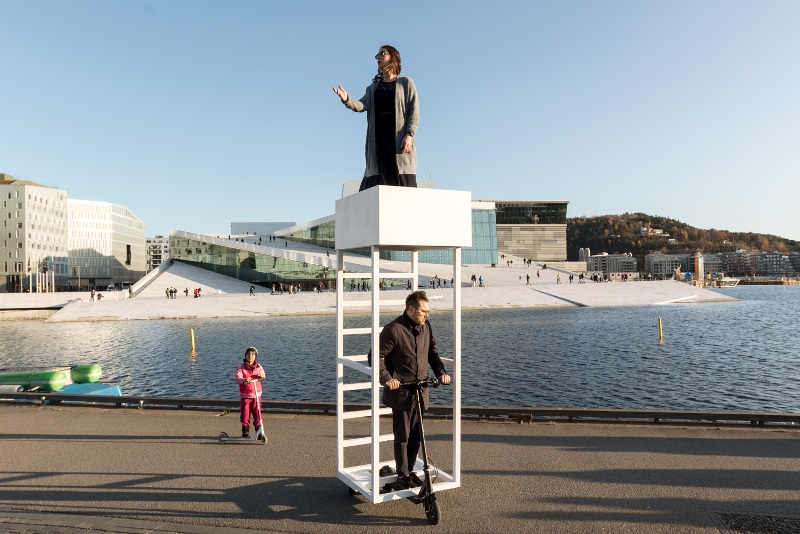 degrowth. Noun. (countable and uncountable, plural degrowths) A negative growth (i.e. a reduction) of an economy or a population. A political, economic, and social movement based on ecological economics and anticonsumerist and anticapitalist ideas.

In total, more than 120 works of art (including temporary interventions and performances) were created over the course of one week, touching upon the paradigms of degrowth, sharing economy, gig economy, rights to the city and intangible heritage.

US artist and provocateur Brad Downey joined forces with architect Diego Sologuren to produce an architectural suit designed to attach to Oslo’s public e-scooters, dubbed the ´Plug-in Pulpit´. In doing so, the functional sculpture becomes a ´gig worker´ (its data is collected) in exchange for the possibility to move quickly. In addition to staging public performances, the object was used to access rooftops and ledges undetected, as well as for unsanctioned firefighting.

Among those to collaborate with Downey and Sologuren on a series of public performances were the Bishop of Oslo, Kari Veiteberg; opera singer Anne Røkke; and graffiti writer Word War Treeman. 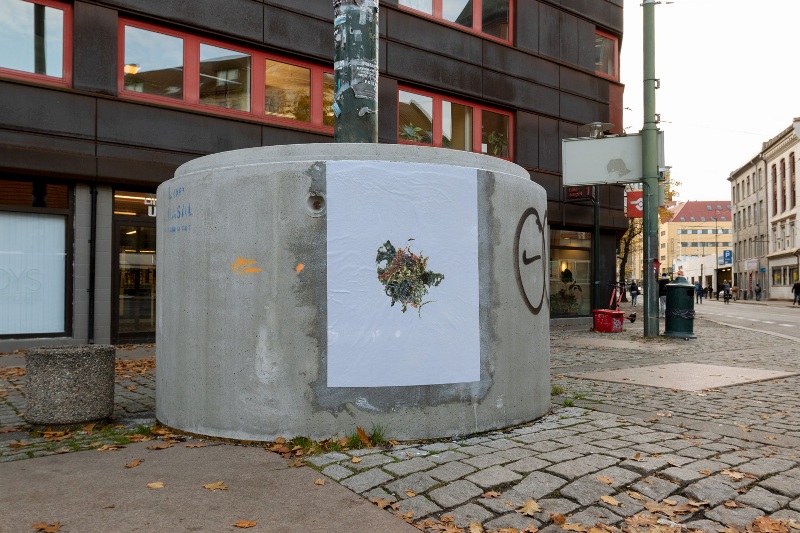 Berlin-based Jazoo Yang, best-known for her critique of gentrification and urban redevelopment in her native Korea, used the opportunity to develop a new series of works called ´Live´. 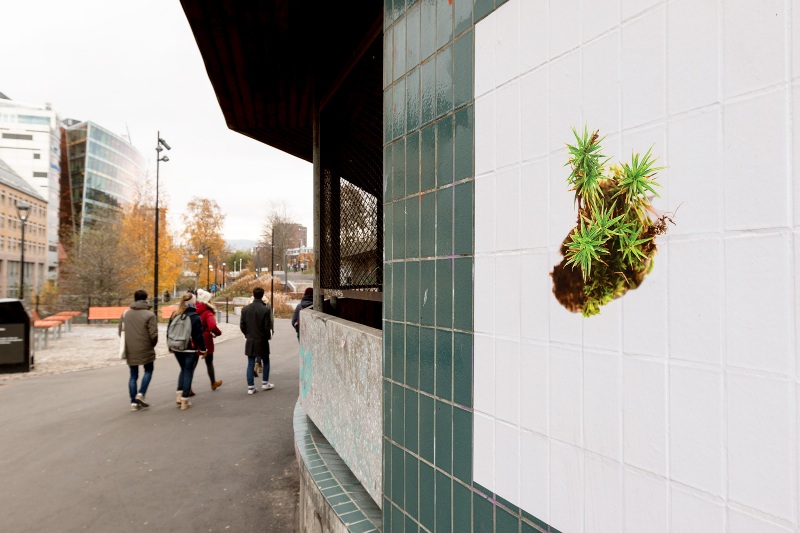 Working within an already heavily developed area in Oslo, Yang decided to collect and catalogue examples of the tiny living organisms co-existing alongside us in the city. Spiders, worms, fungi and moss were photographed under a microscope to reveal details and colours unintelligible to the naked eye. They were then reintroduced into the public realm in the form of large-format posters to symbolically highlight the richness and diversity of life that exists within the city. 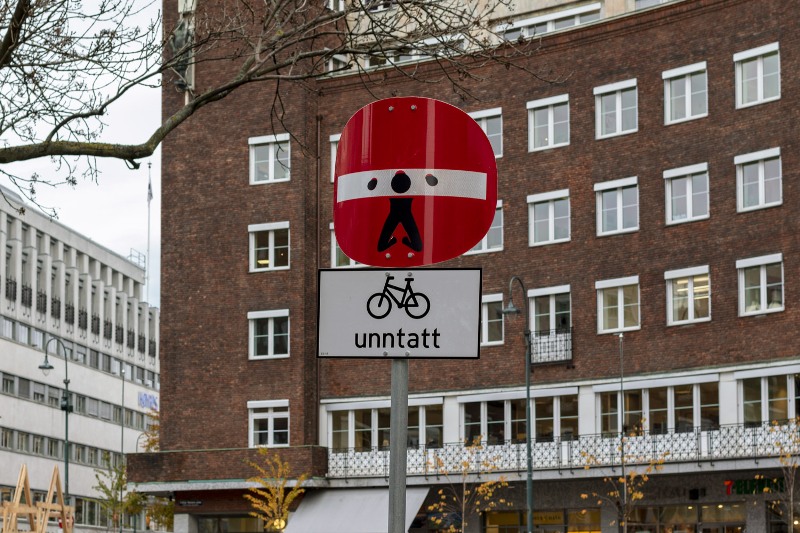 “Collecting tiny things from the street is a really good way for me to observe the city more deeply.” Jazoo Yang

Playing with and subverting notions of power and authority, French artist Clet transformed 100 road signs using simple vinyl stickers. Despite spending less than three full days in Oslo – and with his bike doubling up as a handy makeshift scaffold – Clet covered the majority of the city centre in varying degrees of saturation.

Ranging from the humorous to the political, whilst always keeping an eye on the local context, Clet teased out various aspects of Oslo´s cultural heritage. In Galgeberg (which literally translates as “gallows hill”) for example, a ´no entry´ sign now depicts a man being held in medieval stocks – less than a stone´s throw away from where the town´s court and gallows used to stand in the Middle Ages.

“Clet´s work follows a long tradition of street artists contesting notions of power and authority in public space. By introducing a human element – often philosophical or humorous – to otherwise non-descript and banal road signs, Clet´s work invites us all to reconnect with our surroundings and believe in our own ability to change the world around us.” James Finucane, Desire Lines 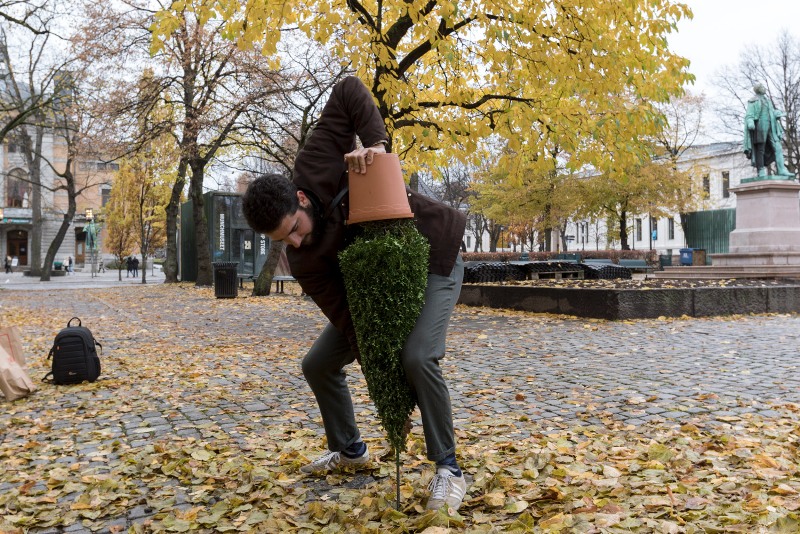 Last but not least, Spanish artist Ampparito chose to interpret the de-growth theme literally by creating a series of adbsurd installations. Planting a variety of small trees upside-down and attempting to water them, Ampparito´s contribution highlights the incompatibility of de-growth economic theory within dominant capitalist ideology.

Degrowth means ´negative growth´ so my experiment was to place plants upside-down in the public space; to try to water them; and see how they interact with the surrounding environment (including people). It´s hard to find examples of living things ´degrowing´ – when they do its usually a precursor to death, a kind of reverting back to how we were in the beginning – like asking to be young again at death´s door. The Spanish for upside-down is “bocabajo”, which in Puerto Rico and Cuba describes a kind of torture. This also seemed like a good analogy for our prospects of achieving economic degrowth! Ampparito

This project is supported by Oslo´s Agency for Cultural Affairs and the Car Free City Life Program.